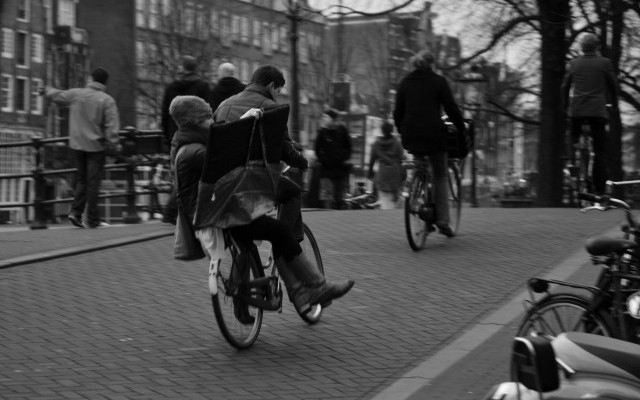 Disclaimer: This article was meant as an April Fool’s Day article. Read more at the bottom of this article.

The private transportation business has been news in every city where transportation network provider Uber introduced its services. In an earlier report on The Proto City, we reflected on the disruptions in the taxi industries around the world. Especially the UberPOP service, in which private drivers can offer transport, has drawn quite some media attention because of its disruptive effects on the taxi industries. In Spain, Thailand, Germany, France and the Netherlands the service has now been forbidden. In most cases, if not all, Uber however decided not to suspend the service. Governments decide it is time to take measures: in Seoul, Paris and Amsterdam, authorities recently raided Uber’s offices in order to obtain recent records of the banned service. In the latter, so far, it has still not yet forced Uber to abandon their practices. 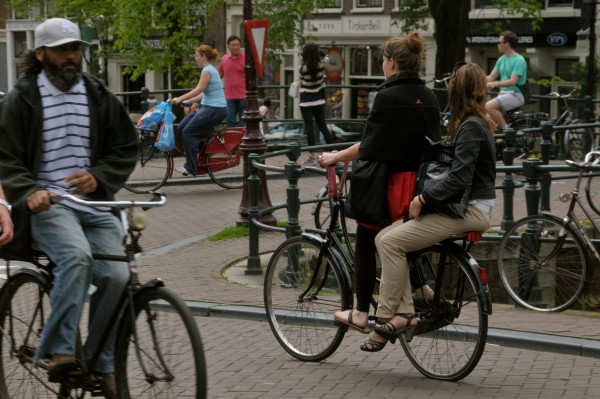 While being prohibited in many countries, sitting on the back of someone’s bike has been part of Holland’s cycling culture for centuries. Picture by Amsterdamized, Flickr

On the contrary: In Amsterdam, the business seems to be taking yet another strategic step in order to affirm its place in Amsterdam’s taxi industry and is working on introducing a brand new unique service: UberCYCLE. It is based on the same system that makes the UberPOP service work. However, instead of offering a car ride, individuals can now offer to give travellers a lift on the backseat of their bike.

It is not the first time that Uber takes cyclists into account. In Seattle, you can order a ride with bike-racks on the back of the car, so that you can drive home and take your bicycle along. In New York City, there exists something called UberRUSH, a bicycle courier service. Amsterdam now seems the perfect place for testing a new service in which people can share their bikes. ‘If it doesn’t work here, it won’t work anywhere’, seems to be the underlying motivation. Not surprising: Amsterdam is a relatively small city with an excellent bicycle infrastructure. On distances until 4 km, cyclists are often quicker than cars. Is UberCYCLE an idea prone to succeed or will it be just a short trend?

The efficiency of the bicycle on shorter distances seems to make bike rental quite popular among tourists in Amsterdam. The advantages of this new service are twofold: First, tourists can get to their destination quickly, while maybe even getting some more insider tips from the local cyclists. Second, the amount of tourists on rental bikes is expected to decrease, thus creating less of an obstruction for the locals, whose complaints about overcrowded bicycle lanes have been increasing over the past years.
A ride on the back of a bike for sure is an unforgettable moment for a tourist, when their host rushes through the narrow streets between the masses of bikes, people, scooters and cars. A British visitor: ‘the idea is fantastic, my blokes and I wouldn’t have to worry about a bike when we’re falling out of a bar here at night. It’s even better than a taxi!’ Another visitor from Germany, who already used one of the pilot-UberCYLCISTS, states: ‘It’s a very good service, although the bike ride is quite rough sometimes on the backseats…’. Judy, a visitor from Chicago was impressed as well: ‘wow, it’s so awesome! You guys are so sustainable here, and it’s so much fun on the back of a bike! I’ll definitely gonna do it again, sure! And, you know, there are some really cute guys on the bikes too!’ As it seems, UberCYCLE is not only a convenient means for transportation, but as well for meeting people. 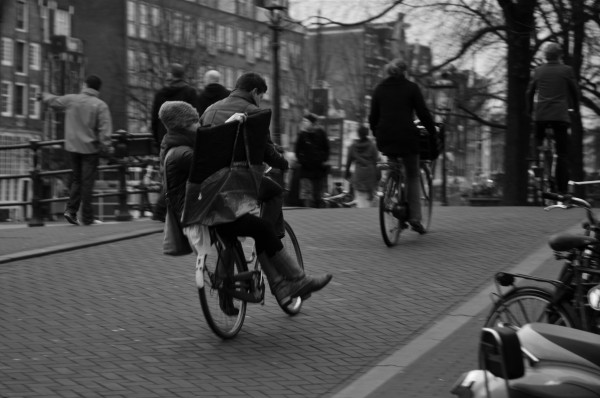 Although Amsterdam is generally flat, climbing the steep bridges may be challenging for UberCyclists – picture by Amsterdamized, Flickr

‘Yeah, you definitely get to know a lot of people’ as Joep, a 21-year old student from Amsterdam, confirms, ‘and it’s easy money! I think almost all my customers will be tourists…cause if you live here, you don’t need that service. You have your own bike, anyways! There’s no life without bike here in Amsterdam.’ Another anonymous pilot-UberCyclist is less happy. He once took a guest on the back of his bike, who was a rather voluminous person. Typically for Amsterdam, his bike has already seen some years of heavy use and was not handling the extra kilos too well. The frame of the backseat bent and blocked the wheel, and the bike was broken; his guest sat on the street. ‘It was a really shitty situation…who’s paying for the damage? I had to buy a new bike afterwards. My guest refused to pay the UberCYCLE fee and I stood there with nothing but a broken bike.’ Indeed, questions of liability are a mayor source of insecurity with Uber’s new service in Amsterdam.

The official bike-taxi drivers in Amsterdam are aware of UberCYCLE, but do not seem to be very happy with the new development. ‘The first time I heard about this initiative, I thought it was a joke,’ says Harry de Jong (52), spokesperson of the Amsterdam bike-taxi union. He stresses that the fact that they are uninsured makes it irresponsible. ‘Us bike-taxi drivers have had a lot of issues with the municipality lately regarding laws and rules. Our numbers have been restricted, we are not allowed to stand still everywhere and the police is often checking us. If you are caught without a valid permission, you are screwed.’

De Jong, while indicating he is not the biggest friend of the police, yet hopes that the UberCyclists will face the sharp attention of the law enforcement as well. ‘As far as I can judge, it is an unruly mess. Not really a positive advertisement for the city. I bet the majority of the Ubercyclists working at night is drunk as hell. Do you think it is safe to let them bring you home on the back of their bike? I would not be surprised if we have to fish some customers out of the canal sooner or later. Or they will crash on the streets because they are not able to decently cross the tram tracks.’ De Jong’s colleague, who wants to remain anonymous, also seems not very impressed by the average Ubercyclist he has seen thus far: ‘many of them are students. Still children, basically. They think it’s an attractive flexible job to pay their study expenses. Many of them come straight from their parents who live in some shitty village. They hardly know the way in the city, let alone they know how to cycle here.’ 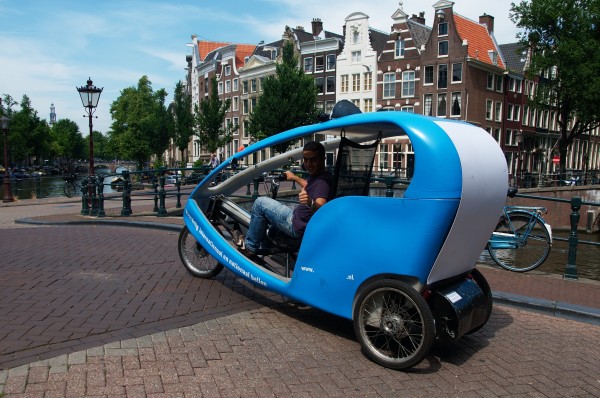 A bike taxi in Amsterdam: is their existence getting challenged? Picture by Fidel Ramos, Flickr

Christian Kosarescu is from Romania, and has been working as a licensed bike-taxi driver in Amsterdam for more than a year now. He is still surprised about Uber’s new service, but admits that it could become a success: ‘you never know. On the one hand, I can’t imagine it is a comfortable ride. Most tourists want comfort when they are travelling, They can get that in my riksja, not on an ordinary bicycle, of which ‘backseats’ are actually meant as baggage carriers. On the other hand, the service has just been launched and I’ve already seen quite many of them.’ On the question whether he feels threatened by Uber yet, he answers negative. ‘But they should not become too cheeky. Yesterday a group of 4 Ubercyclists were cycling next to me, and shouted to my customers that their service was a lot cheaper than mine, and that they should boycott our service because local cyclists are annoyed by the size of our bike-taxi’s.’ Kosarescu says that he decided to ignore this action, but that they should not try to do the same with all of his colleagues, since ‘they may not all respond as tranquil as he did’.

The 21st-century sharing economy has been praised a lot as a sustainable alternative to the former consumerist economy. New, innovative initiatives have been mushrooming, especially in cities with a young, dynamic crowd which easily forms a critical mass for services such as UberCYCLE. Unfortunately, due to restrictive laws, it is not very likely UberCYCLE will become a global phenomenon soon. In Copenhagen for instance, which is also known as a cyclist-heaven, it is not allowed to carry someone on the back of your bike. In Amsterdam however, it will not take long before everyone has heard of UberCYCLE. Especially if the city council finally agrees on making the centre car-free, UberCYCLE will be the main mode of public transport in the future!

This article was meant as an April Fool’s article, written by The Proto City’s Editorial Board. However we love cycling and Amsterdam’s cycling tradition and culture, we do not think it is very likely that UberCYCLE would have become a big success. Therefore, the city’s bike-taxi drivers do not yet have to worry about cheeky competitors. Loyal followers of The Proto City of course instantly knew we would come up with a spoof-article on 1 April, as we did so last year and in 2013 too. Our fictive friend Rothar Kolesa may have been recognized as well, since he earlier wrote the 2013 April Fool’s post. Thanks for liking and sharing, keep following us and let’s continue making cities more liveable together by new creative initiatives! 😉

Rothar Kolesa is finishing his Msc Urban Sociology degree at the University of Amsterdam, writing his thesis on the sociology of traffic conflicts in middle sized mixed modality cities. 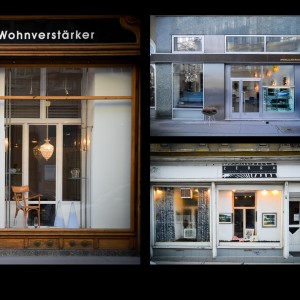