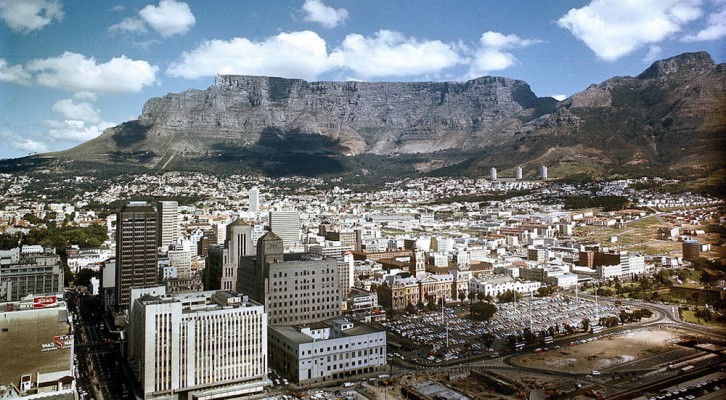 Cape Town is known for its cosmopolitan yet laid-back lifestyle. The city centre is surrounded by magnificent mountains and stunning beaches. Walking through the vibrant city centre it seems that apartheid, the period of minority rule and institutionalised racism that shocked the world, is well and truly over. 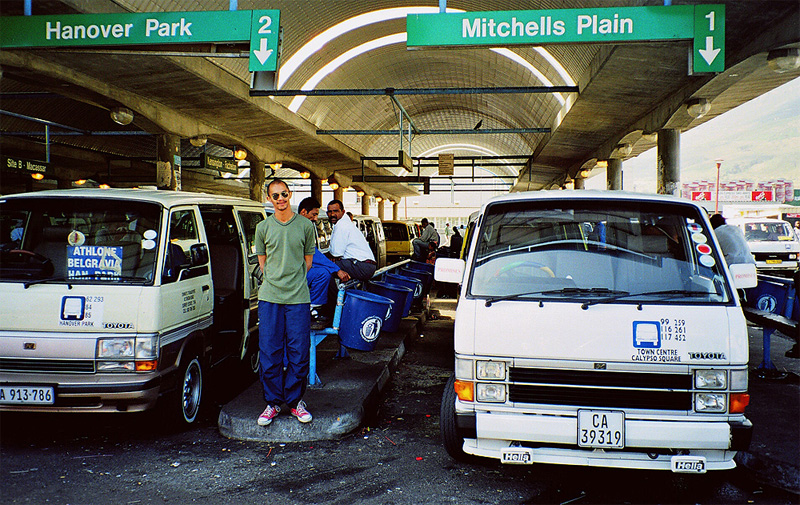 Yet, during my five-month stay in Cape Town in which I did research on the Indian community, I found that there is still something unsettling about the city. When I first arrived, I found it hard to deal with the uneasiness I felt when sitting in a crowded upper-class bar while only white faces stared back at me, or walking into someone’s house while the unacknowledged black maid cleaned quietly around me. This is the story about how I eventually learned to navigate and, to some extent, overcome the extreme segregation that still plagues South African society.

How I did this is simple: by taking a taxi to Rylands.

Taxis are minibuses that only leave when chock-a-block full and ride predetermined routes, dropping off and picking up people along the way. Customarily blasting loud music, these often un-roadworthy minibuses are ubiquitous in the South African streetscape. Every day, around 14 million people make use of shared taxis in South Africa. These taxis were also my main mode of transport during my five-month fieldwork. 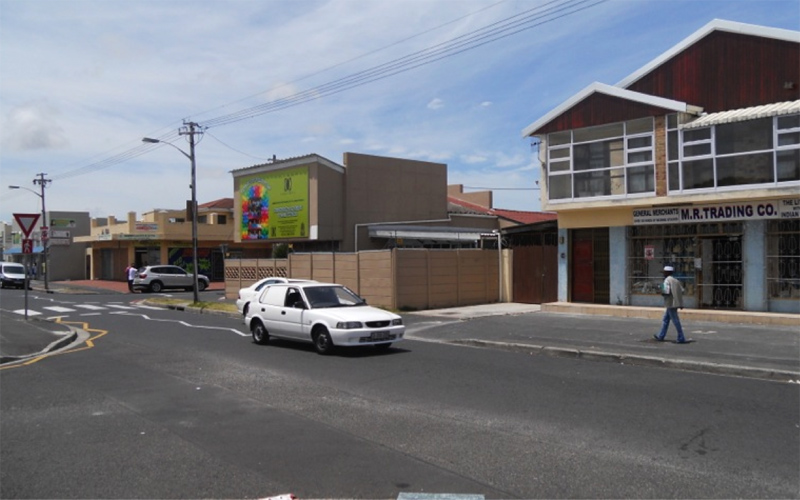 Taking a taxi from the city centre to Rylands, the Indian area of Cape Town, is an experience that never failed to yank me out of my comfort zone. Walking out on to the taxi rank, where hundreds of young black and coloured men shout out at you as you search for the right vehicle, seems to already mark the boundary of white and black space. As I sit in the taxi and wait for it to fill up, I gaze up at Table Mountain through the window. I have come to associate the postcard-perfect front view with the upper-class whiteness of the city centre. After waiting for what seems like a lifetime and more people have been pushed into the taxi than I ever thought would be possible, we are off.

No two taxi rides are the same. On one trip, crammed up against his mother, a beautiful baby boy fell asleep on my shoulder and started drooling. On another trip, I tried to give up my seat to an older gentleman in order to stand bent over against the front seat of the car, as I had seen countless young men do before me. Everyone in the taxi screamed at me to sit down immediately; apparently there was an unwritten rule that women do not give up their seats for men. On a third occasion I got into a heated discussion with a young Muslim man who tried to convert me to Islam, while the entire taxi listened in on our conversation. During every taxi ride, however, the driver (or sometimes his helper, called a gatjie) goes about the same dangerous business of passing back and forth change and at the same time shouting the destination at the top of his voice in order to pick up more clients, all the while driving at a neck-breaking speed. 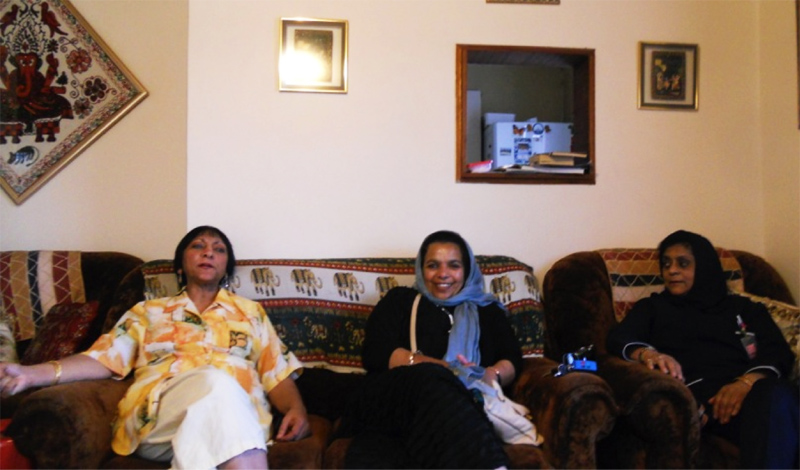 As the taxi rides deeper into the Cape Flats, the physical landscape begins to bear the symptoms of sustained socio-economic depletion. The Cape Flats is the space where thousands of non-white people were forcefully removed to during institutionalised apartheid, and it remains one of the poorest residential areas of the country. There are coloured, black and Indian neighbourhoods, all still pretty much in tact despite post-apartheid efforts to de-racialise space. The loud, hot, crowded environment of the minibus as it excels forward into these deprived areas cannot feel further away from the lusciously air-conditioned cafés that line the boulevard at Camp’s Bay beach, on the other side of the city.

However, there are extreme contrasts within the Flats, too. While the nearby ‘coloured areas’ of Manenburg and Bridgetown are known for violence, drugs, and gangs, Rylands is a small residential neighbourhood with a middle-class reputation. The very first time I got out of the taxi on busy Klipfontein Road, I already noticed there is a distinct feel to the neighbourhood. The shops sell Indian items and the cafes advertise Indian dishes such as masala dosa and tandoori chicken. Walking away from the main road and into the neighbourhood, I was immediately struck by how deserted it was. The only people walking on the streets were a few men; gardeners and other labourers, beggars and junkies, or perhaps even gangsters from the surrounding townships. A woman walking from a shop to her car stopped me and asked: “You’re not from here, are you?” An immediate sensation of unsafety swept over me, and I couldn’t help feeling like an unknowing outsider.

Despite these adverse circumstances I eventually managed to gain access to the Indian community of Rylands. After five months of fieldwork I had also perfected the art of taking a taxi; catching it while it was driving so I would not have to wait for it to fill up and picking out the best seat so I would not be the one who has to collect the change. I also got over my fear of walking the last fifteen minutes into the neighbourhood. 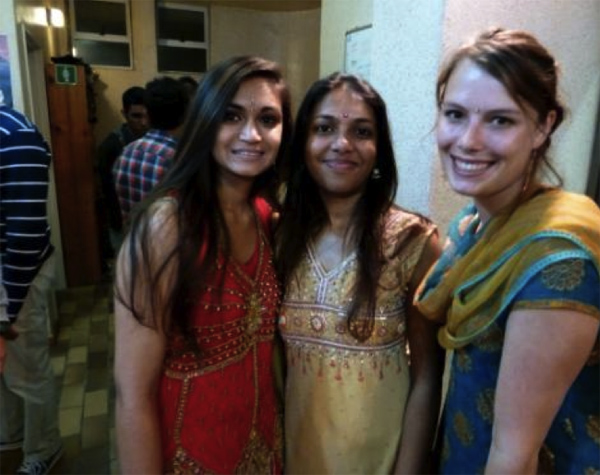 At the Temple in Rylands (Photo: Molly Fitzpatrick)

While walking through the empty streets of Rylands on the very last day of my research, I gazed up once more at the mountain. I now saw it from the back, less attractive side. Lost in thought, I evaluated my experience of the city over the last few months. Taxi rides showed me another side of Cape Town, beyond the beaches and tourist attractions. They also showed me that despite the abolishment of apartheid, segregation remains, not only along economic but also along racial lines.

During my research I was slowly enveloped by the Indian community living in Rylands, which meant I got to see a fascinating, yet confined and somewhat hidden, aspect of the city that not many visitors are privy to. As I sped up my walking pace, still a little worried that I might get mugged on my last day, my mind drifted to the chicken biryani I knew was being prepared for me by Jasumati Mitra, my favourite ‘aunty’ in Rylands, and my mouth began to water.

Molly Fitzpatrick completed her Bachelor in Cultural Anthropology from the University in Amsterdam, and she is currently graduating from the Research Master in Social Sciences at the same university. Her research is an ethnographic study of the transnational connections and identity struggles amongst South African Indians.

I saw a property in Rynlands now I am worried to called the landlord.My friends landlord is Indian and he is kind man but I don”t know whether as foreign black man i could live conveniently in that area.SOME Indians are also known for their overt racism.

you people are the worst ,indians don’t ho around robbing slandering and stealing take durban into consideration its blacks doing 99percent of the crimes and indians fear url so keep your junk comment off social ,blacks are the worst racists in the world apart from whites

Would have expected seeing a bit more information about the actual Indian community in Rylands, or even elsewhere in Cape Town, rather than a detailed description of a taxi ride.
Btw, in your 5 months research, how many Indians have you noticed using taxis?

I can relate to much of this article. I am in Cape Town for over a year now originally from Johannesburg but have lived in most of the cities in South Africa. I have travelled extensively throughout South Africa and lived within different communities. I am Indian BTW but have found that the few Indians I met in Cape Town are different to Indians in other cities. I have not been to Ryelands but will definitely visit. The Indians here are not as friendly, neither welcoming in fact the Indians I met are snobbish and are pretty much like most of the whites of Cape Town. There is a hierarchy here and the rasicsm or rather prejudice is almost blatant. A definite financial prejudice and from most of the white community racism.

Lampposts covered in knitting, pop-up parks, and mid-20th Century housing painted with officially-sanctioned graffiti: from...
© 2012 - 2019 The Protocity.com. All rights reserved.
Back to top