The following stories are from Third Street in the Sai Ying Pun neighbourhood of Hong Kong. For a longer tour, see the television series entitled A Journey Called Life. 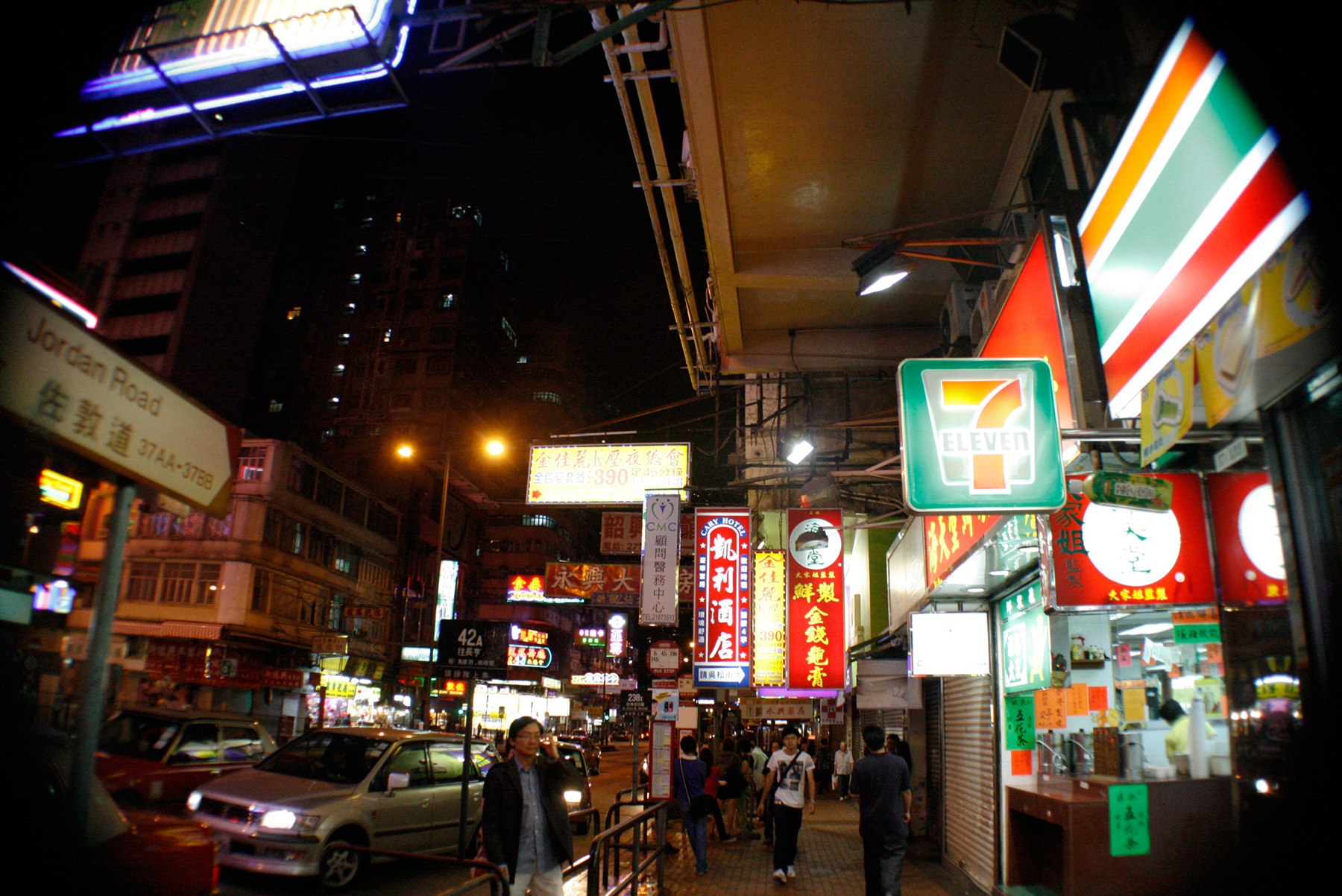 Every night of the week, Mr. Yeung mans the counter of the 7-Eleven for twelve hours, selling cheap beer and light snacks, servicing the late night cravings of a trickle of customers. With most of his patrons fast asleep, he stocks the inventory and mops the floor. A thirty-something man with a round face and shaved head, Mr. Yeung is the strong silent type, never batting an eye at strange purchase combinations such as four tall cans of rice beer and one copy of the China Daily. So how did the even-tempered Mr. Yeung end up with a black eye?

With each visit after it first appeared, the eye seems to progressively worsen, becoming more and more difficult to ignore. As the blood pools under the skin below his right eye, fantastic stories became more probable: was Mr.Yeung the victim of a robbery? Had he protected the store against an armed assailant in the wee hours of the morning? Why didn’t I hear the police sirens? And why isn’t there more security to protect valiant Mr. Yeung? Or does Mr. Yeung lead a double life, going to nightclubs after his shift ends at 7 am?

I could never, and will never, ask. Just as Mr. Yeung doesn’t flinch when I buy a children’s chocolate milk and a bag of salty crackers after midnight on a Friday, I’ll reciprocate with an equally expressionless look. When I hand over the change, he’ll treat my pile of children’s snacks accompanied by a teen magazine he knows that I can’t read as the most natural purchase in the world. When I take the coins from his hand, I’ll look into his eyes as if half his face is not swollen and discoloured, as if nothing is out of the ordinary. 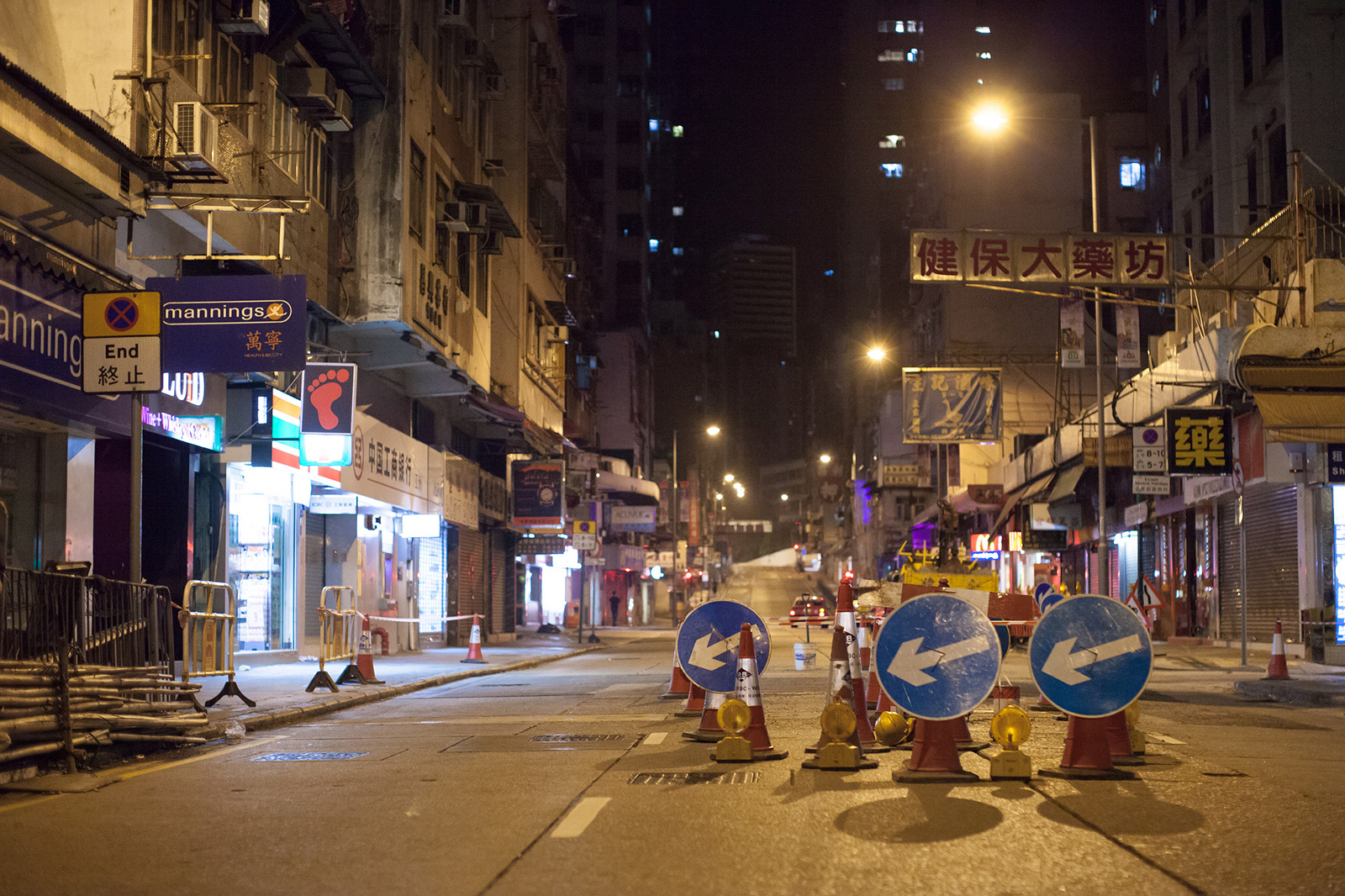 By all accounts, I have a good relationship with my hairdresser. I say ‘my’ because I’ve been here twice. He discovers that I’m German, sharing the same origin as his electric shaver. With pride he says, “German quality. Twenty years and I’ve never had to sharpen it.” He likes soccer and Mesut Özil: clearly, we’re a good fit.

A man whose sole occupation is to ready my hair for cutting: washing the hair multiple times, thoroughly massaging my scalp, before applying intensive conditioning products that turn my hair into silky strands. What he probably doesn’t know (and I can’t bring myself to admit to him) is the futility of his work. In a few minutes, all of my freshly treated hair will be a pile of trimmings on the shop floor. Feigning obliviousness but avoiding eye contact, I move on to the barber’s chair.

Wiggling into the hydraulic chair, my hairdresser gives me a pile of assorted magazines to find my new intended hair style. Caught off-guard by catalogue ordering, I have a hard time picking a haircut. We don’t share a common language, and the hairdresser interprets my indecisiveness as a rejection of current Hong Kong fashion. He picks up his iPhone and starts image searching Western actors and soccer players. Trapped in the barber chair, I start to panic. Endless David Beckhams and Brad Pitts appear on his screen as he looks at me searchingly. In vain, I try to gesture that all I want is a little shorter on the sides and longer on top.

At the last moment, at the height of my terror, I spot a men’s magazine hidden under the hairstyle catalogues and point to the cover model: a debonair man with three-day stubble, a tight blue blazer, and a meticulously side-parted coif. One of those classics is always useful when words fail and opinions differ. He nods, takes his German-made machine, and starts in. 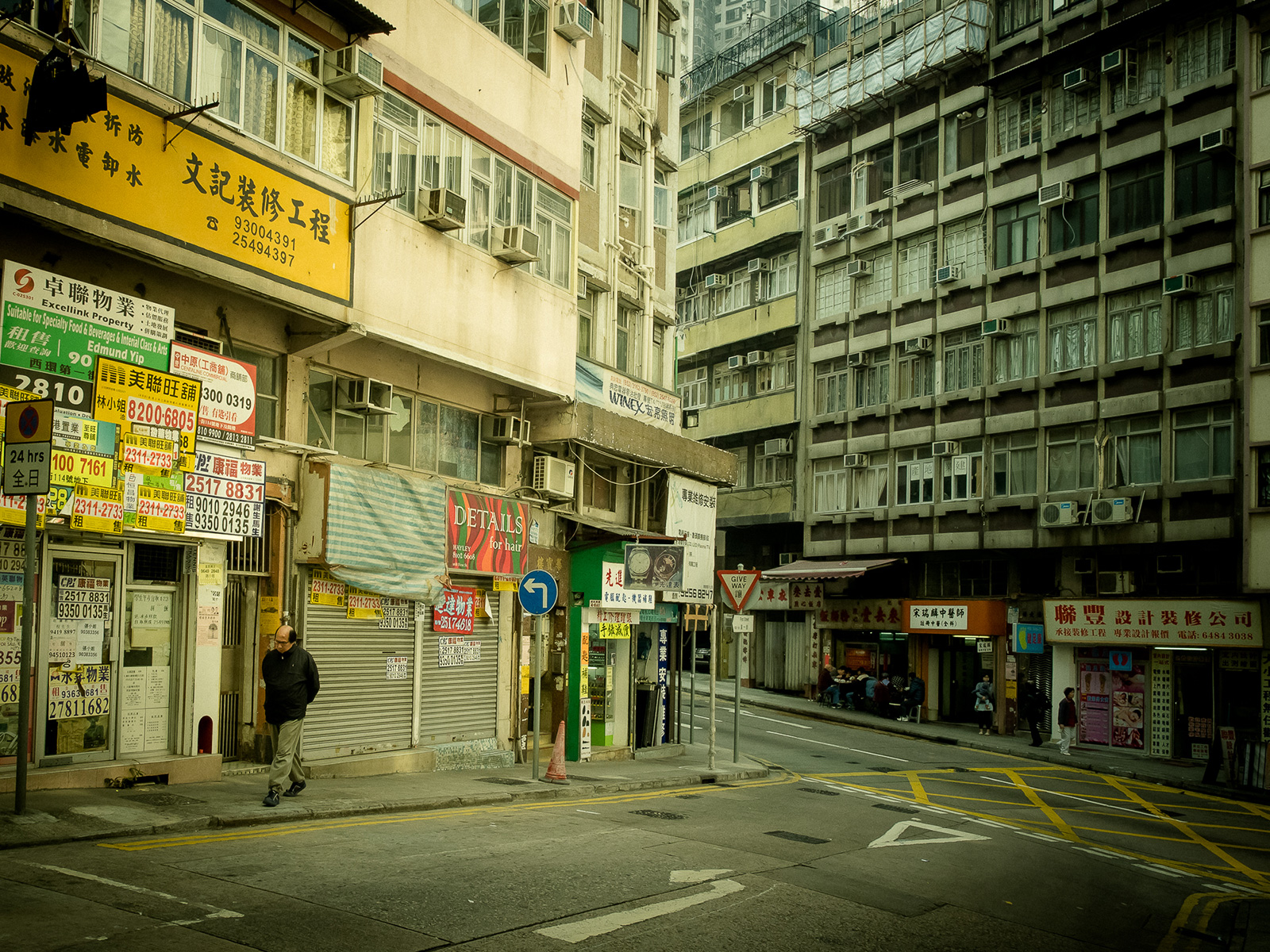 Erica is the ever-smiling owner of a little laundromat, taking care of towels and bed linens from adjacent hotels and hairdressers. She also handles the clothes of local residents whose tiny apartments are incompatible with such heavy machinery. Erica faces stiff competition: there are at least three laundromats on the block. In her mid-50s, she keeps vigil by her machines until the wee hours. Occasionally, guests come by and eat dinner with her behind the counter, chatting away over the constant rumbling of the machines.

I like Erica a lot. She offers to help me when the bags are too heavy, she’s always game for a chat when I’m passing down the street. The only hitch is that her industrial washing style isn’t so great for my clothes: my whites are now grey and everything has shrunk. Switching now is out of the question: we’ve built a relationship, and her shop faces the sole entrance of my building. She’d know if I lugged my sack out of the building and turned left or right instead of walking straight toward her. I can’t bear the awkwardness of such a betrayal.

Erica now knows me very intimately. She knows when to expect me each week, what my apartment looks like, at least in terms of its mismatched towels and candy cane patterned bedspread. She knows my fabric and intimate apparel preferences. She knows that I’m in dire need of new socks and pants but that I never get around to replacing them, that my clothes are often a few sizes too big for me, and that my exercise regime is hardly consistent. At this point, would I really want somebody else to air my dirty laundry?

When the doors of the small coffee retailer open, Third Street fills with the odour of freshly ground coffee. Inside the tiny shop, there are dozens of mason jars filled with beans. The labels promise origins from all over the world. I quickly become familiar with the store owner, a petite woman who drags heavy sacks into the storage room to later refill the beans into tiny more manageable aluminum bags.

I’m probably not difficult to recognise: each visit, I’m overwhelmed by the plentitude of so many little brown beans. Grown in Costa Rica, Indonesia, Kenya, Ethiopia, they travel to hip roasters in Berlin before arriving at their final stop: this tiny store on an unassuming street in Hong Kong. I’m intimidated in this connoisseur’s trove and with barely enough room to turn around: I have no place to hide.

I stand vulnerable in the centre and mumble incoherently, something about dark and bold. Before she can answer, I pre-emptively assure her that under no circumstances will anyone add sugar or milk to any coffee brewed from these sacred beans. They’ve travelled too far to be transformed into a run-of-the-mill cup of joe.

I wince, feeling judged, as she searches for the off-trend dark roasted beans languishing on a bottom shelf. Afraid she will ask me about my brewing or even grinding technique, I quickly pay, wish her well, and run back across the street. 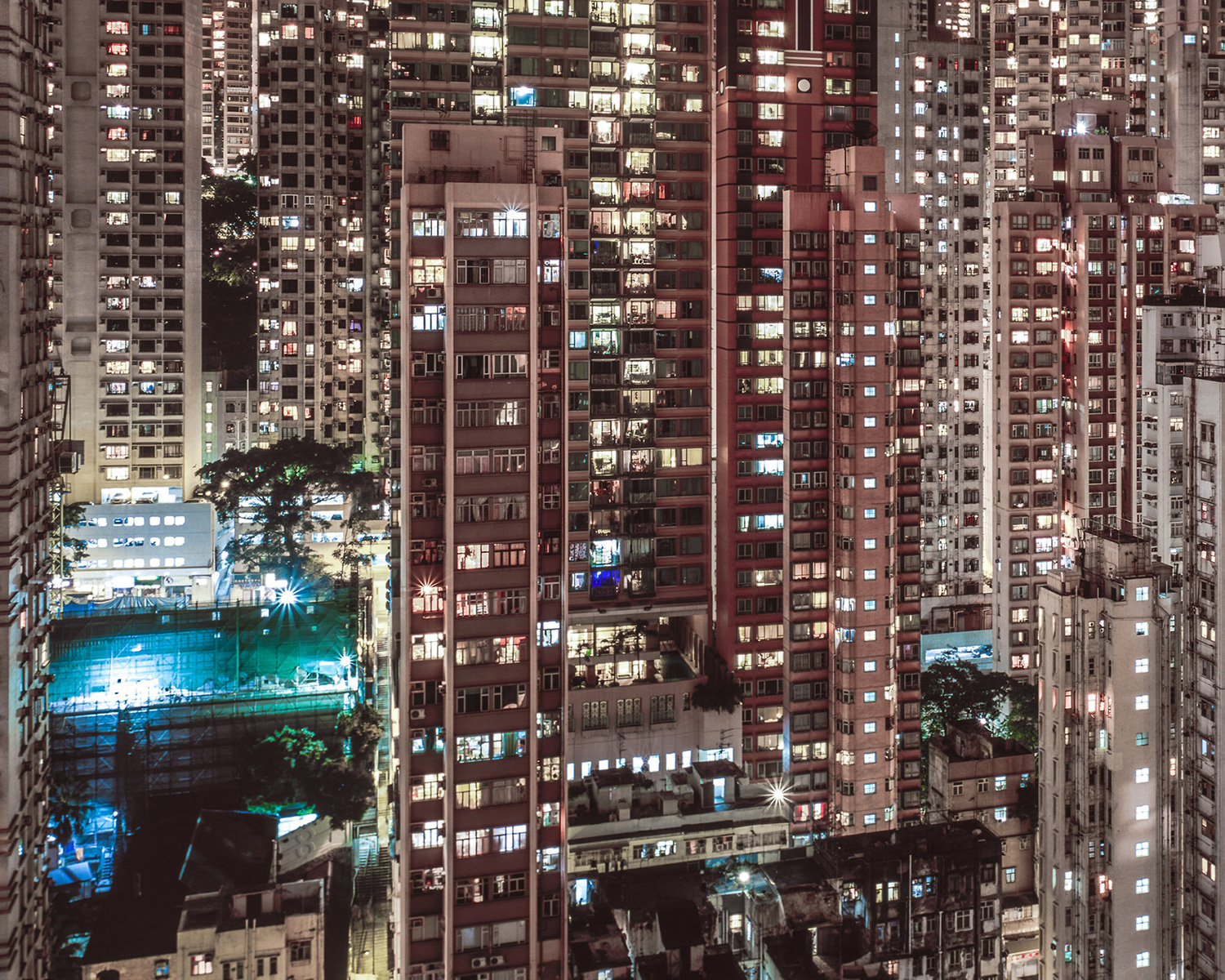 Simon digs his calligraphy brush out of the desk’s top drawer and starts to write a little note. “There will be rain today – don’t forget your umbrella,” Simon hangs the sign in the entrance area next to the elevator. On sunny days, Simon writes a note wishing a wonderful day; on weekends, everyone a restful time. In December, he decorates the hallway with green garlands and hangs red lanterns for the lunar festival. Simon comes here almost every day. But since there is not much to guard and protect, he spends his time otherwise. Simon enjoys making the sixteen square meters of white-tiled hallway a nicer place. But most of the time, he is hidden behind a cluster of aged widows. Chatting and laughing. Flirting a little, perhaps.

The long black scratches on the freshly painted wall in my apartment have recently become a matter of concern. My landlady is due for a visit and it is Simon who helps me out. He understands that she won’t be amused by the traces of my suitcase’s rubber wheels that miraculously span from the entrance door to the window frame. Simon doesn’t ask questions. Very professionally, he takes a sample of an unscathed piece of paint. I repeat from memory, my landlady’s proud description: “A chalk-based beige-coloured anti-mold paint.” Unimpressed, he nods and puts the small metal box with the sample in his pocket. Just two days later, Simon hands me a little can of paint. He includes a new brush and gives me concise instructions for my paint job.

Simon knows what it means when the job is finished: it’s time for me to leave for good. He asks me if I’ll come back, tears welling in his eyes. I say, “yes, hopefully.” Following his instructions, I take my umbrella before venturing out.

Patricia Roach is a first-year MSc student in Urban Studies at the University of Amsterdam. Prior to studying urban oddities like city tattoos, she studied political science at Reed College (Portland OR) and taught kiddies in Seoul, Korea. Her current research interest is the development of social space in New Towns. 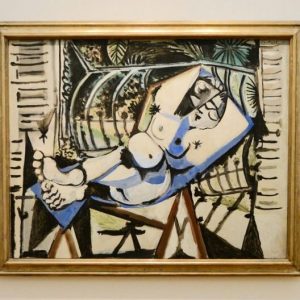 Woe to you the day it is said that you are finished! To finish a work? To finish a picture? What nonsense! To finish it means...
© 2012 - 2019 The Protocity.com. All rights reserved.
Back to top