‘Stand clear of the closing door, please!’ This phrase is a steady companion on a ride on the extensive New York City subway system reminding all passengers to suck in our stomachs so that every last person on the platform fits in the train. Not suprising that, with an average weekday ridership of approximately 5,3 million in 2011 and 468 stations in the system on 24 lines (for more facts, see here). Since 1904, when the first line opened, New Yorkers can enjoy a ride on the subway, which in fact runs for large parts in the outer boroughs in elevated sections. 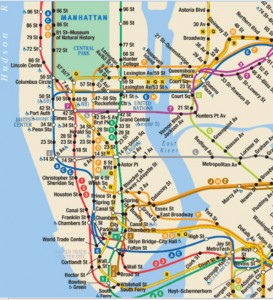 Task number one before entering any train here: figure out the network. Not difficult, you say? Sure? A glance on the cutout of the system map will teach you better: it is quite complex, not to say confusing at times. The service pattern contains not only trains that stop at every station, which is what most of us are used to, but express service as well that skips many of the stations, leaving the unprepared passenger quite desperate in the train facing the rushing-by station. During rush hours, trains are not only stuffed with people, but service changes sometimes to what is called skip-stop service, meaning that the train stops only at every other station. Or during nights, when, finally, your much desired express train home arrives and after ages of travel you realize: the express mutated into a local train making every damn stop on the line.

Not too bad, you think? Well, let’s look at this nice example: The A-Train, the longest line in the system at almost 51 km, runs as an express service in Manhattan during day, while during the evenings it operates as a local train. Let us pretend you went out to one of the fancy clubs in Greenwich, enter the subway at W 4th Street station in downtown aiming to go home to the Upper West Side near 125th Street station on the same line. During day, only six convenient stops away: the trip during the night takes fourteen stops, feeling somewhat like a meandering trip to the West Coast.

Still, once you’ve figured out your way through the underground maze of lines and stations, the system is efficient and swift. And this will make all night-owls happy: it runs 24/7. Despite all these little complicationas around your subway trip, it is a highly social activity, especially during rush hours, where you can come very close to your co- riders. By times, you are even entertained by emerging singers giving your journey the feeling of a small, intimate concert. Or, for some of us less pleasant, you will be informed about your highly sinful life, and that Jesus still loves us. All of us. Except for those who change cars to escape the hobby priest. To make sure we do not miss a single word of the sermon, he is often as kind as to stop during stations and when other trains pass by. Of course, there are other ways of being social on the subway, for example giving the homeless guy some change or buying some snacks from one of the teenaged hawkers. 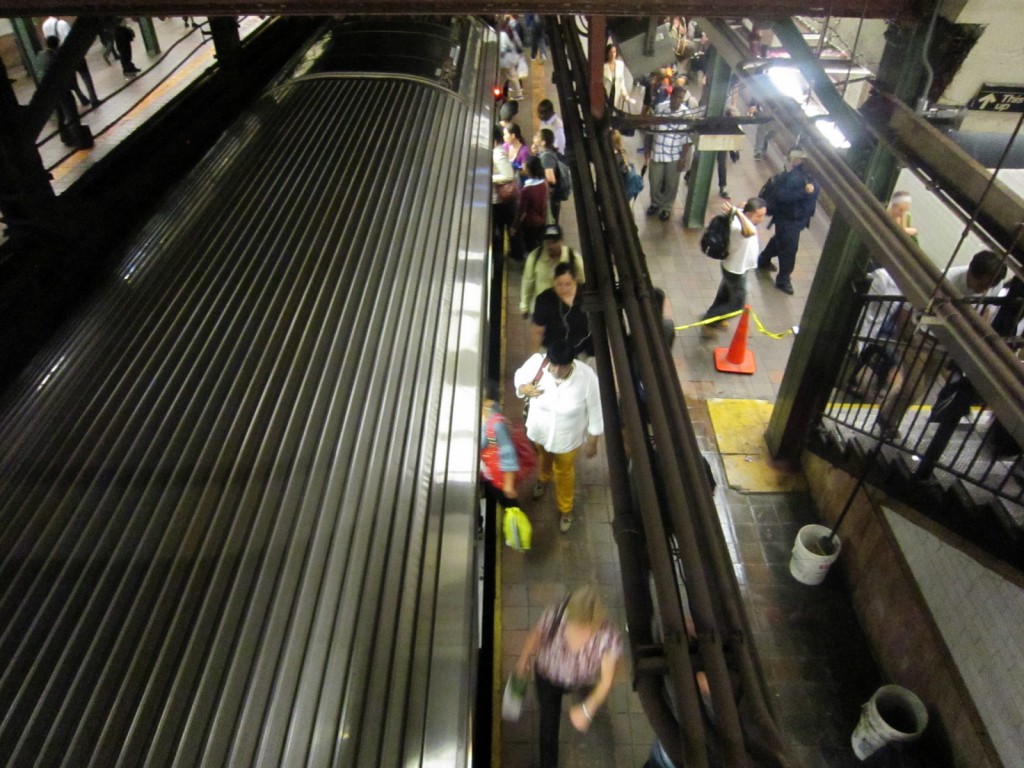 The subway during rush hour, with people pushing into the train almost like in Tokyo 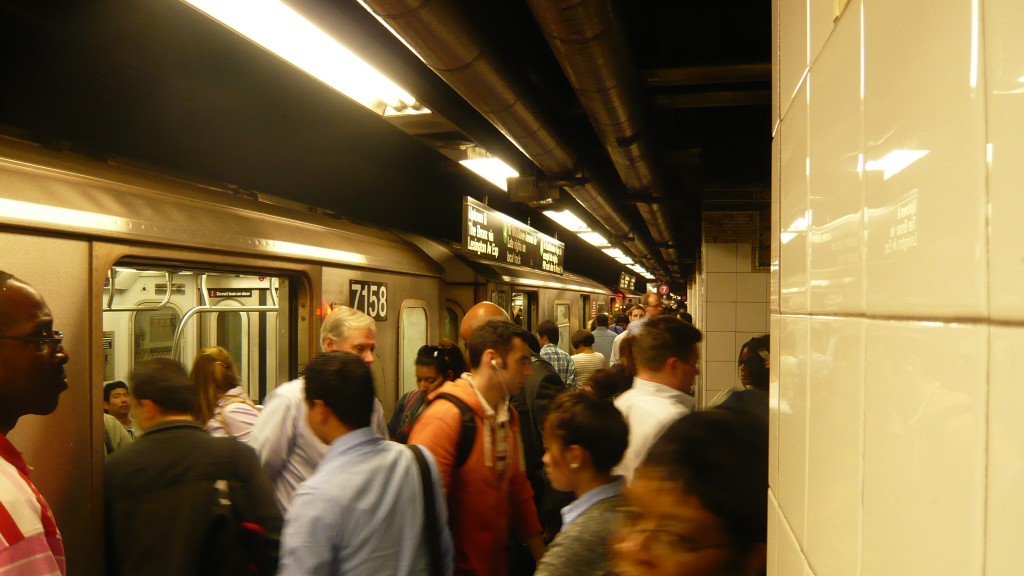 The subway doesn’t always run underground, but on elevated tracks through the outer boroughs of the Bronx, Brooklyn, and Queens offering the one or another scenic view of the urban landscape. Or in the windows of the houses nearby. A special feature of the elevaed tracks is its roughness: built in a very simple, cost-efficient way, with just a steel structure with the tracks directly on this structure without any noise protection, make a ride on these tracks a swinging and rumbling experience. For the inhabitants near the elevated tracks, this means rumbling around the clock. It is impossible to have a conversation on the street if a train passes by, not even if you scream into each other’s ears. 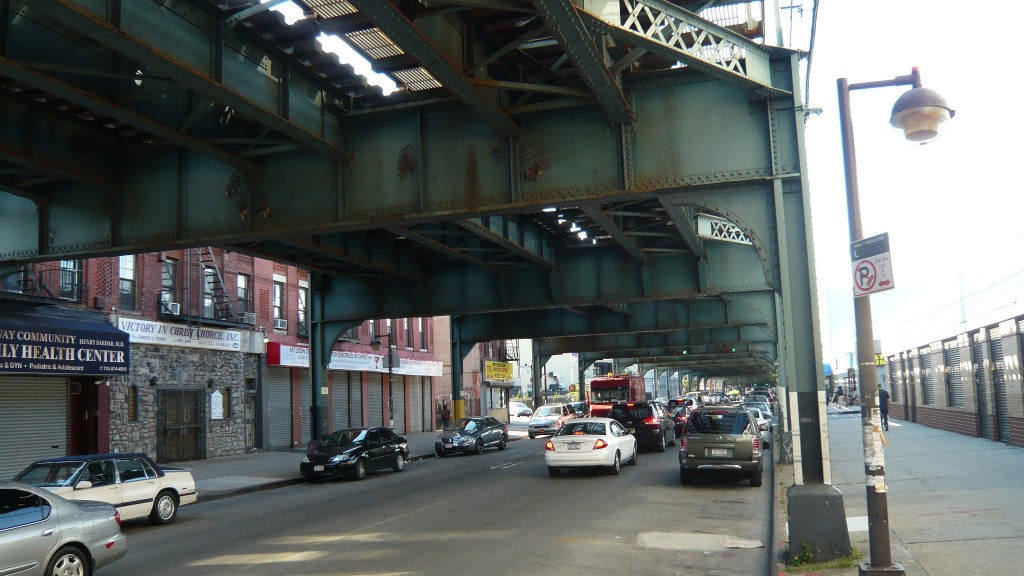 Elevated subway in Brooklyn, right above a street, framed by used or mostly vacant houses 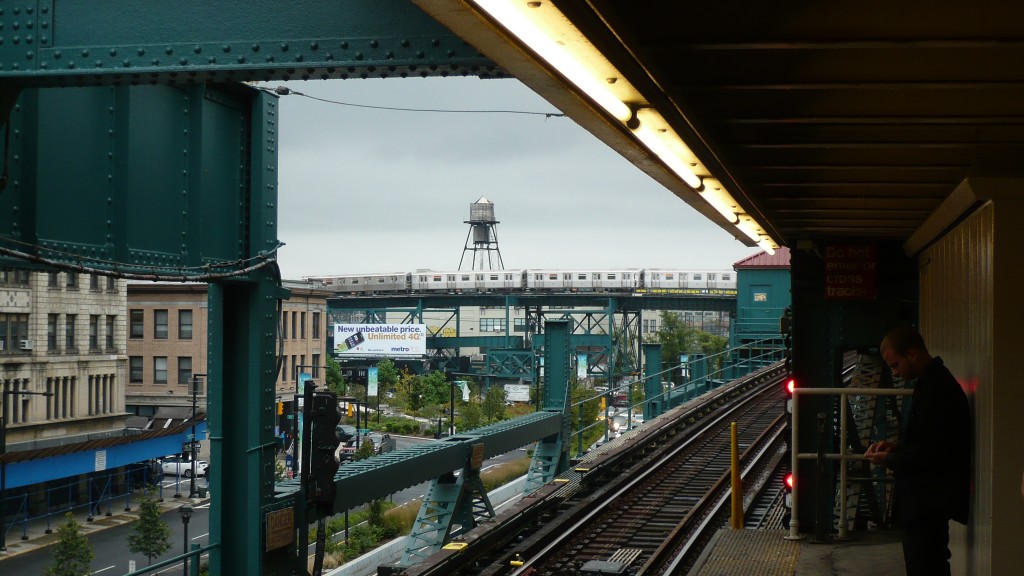 Considering this feature and the rough design of the tracks, you feel like travelling back in time into the high industrial age of the early 1900s, when steel was the dominating construction material. This heritage is visible throughout the entire network, which hasn’t seen any major additions since the 1940s (though some new lines are built now, such as the 2nd Ave subway, the East Side access, and the extension of the 7-train) and, thanks to decades of disinvestment, could save a large part of its rough, loud, shabby and unique industrial charm that makes this system really unique within the developed world. 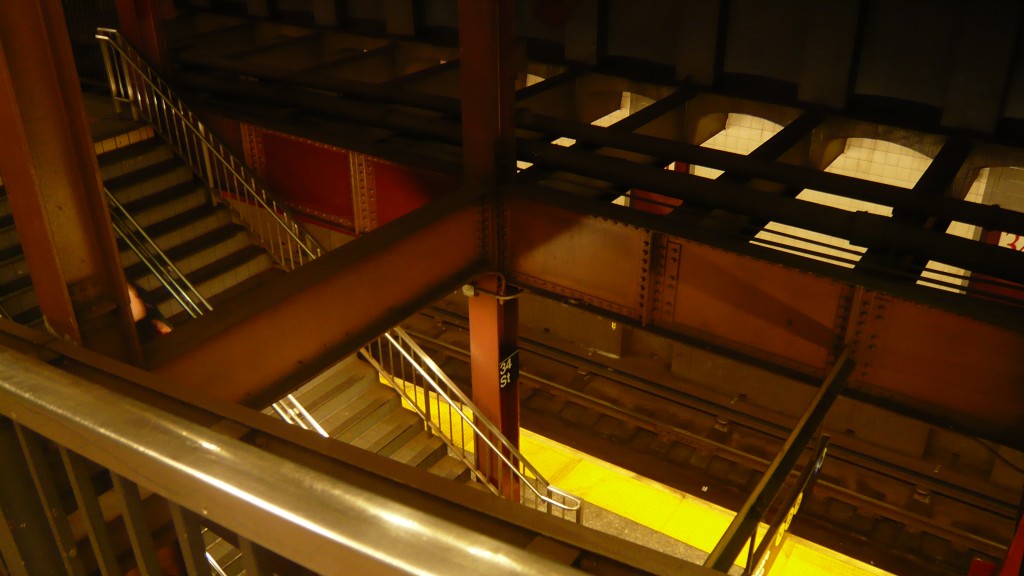 Steel beams are the dominant element, giving the subway its industrial charm 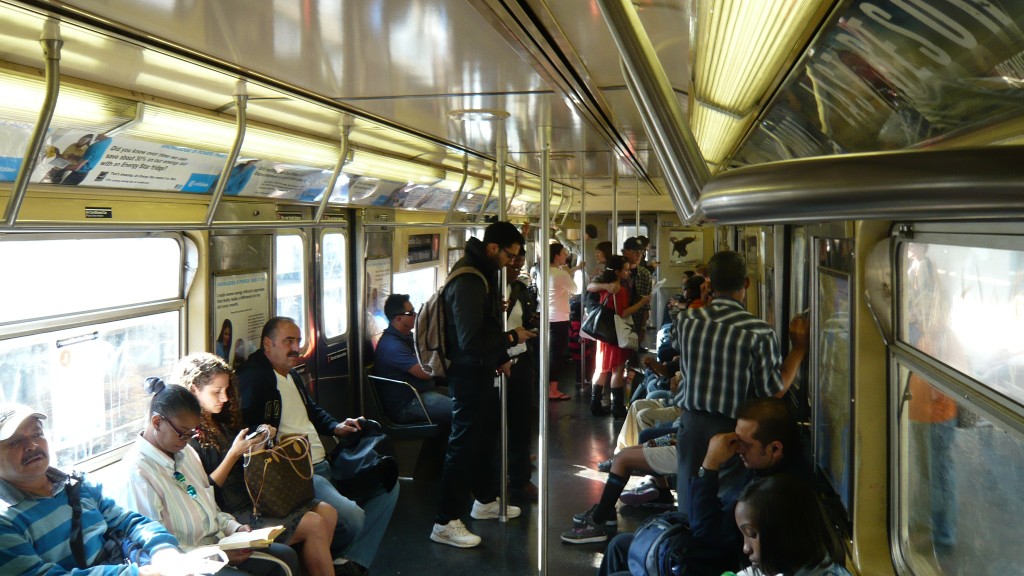 Inside an older J-train

Let’s talk a little bit more about the looks of this subway. The New York City Subway does not exactly resemble the glamorous image of the New York that one might have after watching a couple of episodes of Sex and the City. The trains look like tin cans and the stations are hot, noisy, desolate, run-down, and smelly (romantic, right?). In the summertime, the temperature can get up to 100 degrees Fahrenheit (38 degrees Celcius). Paintwork is blistered, there are holes in walls, tiles are broken, and ceilings sometimes even look like they can collapse at every given moment. 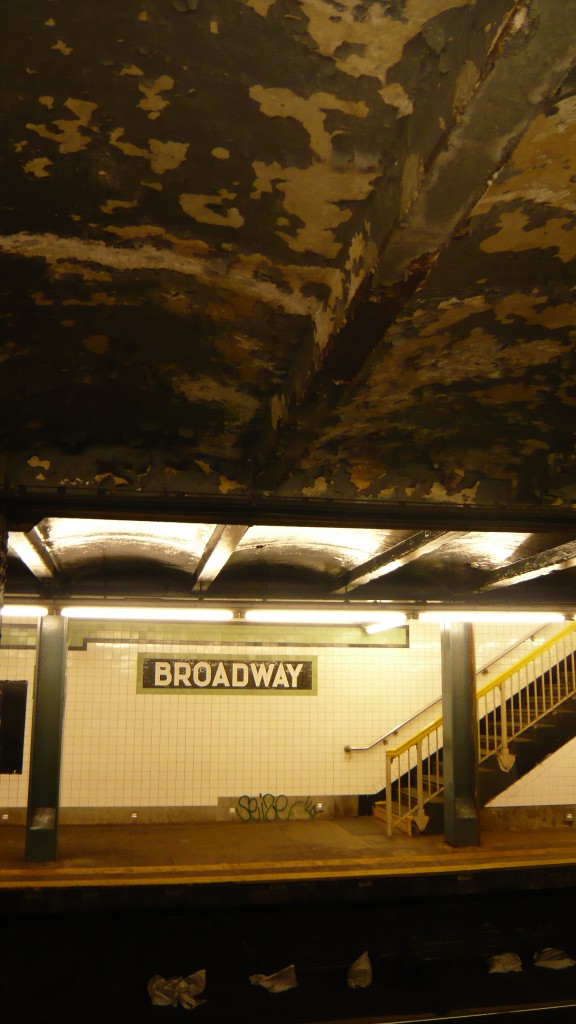 Peeled paint on the ceiling at Broadway

This all sounds terrible and it is also kind of depressing, but on the other hand does this deterioration has its nostalgic charm, as is visible on these pictures of Chambers Street: 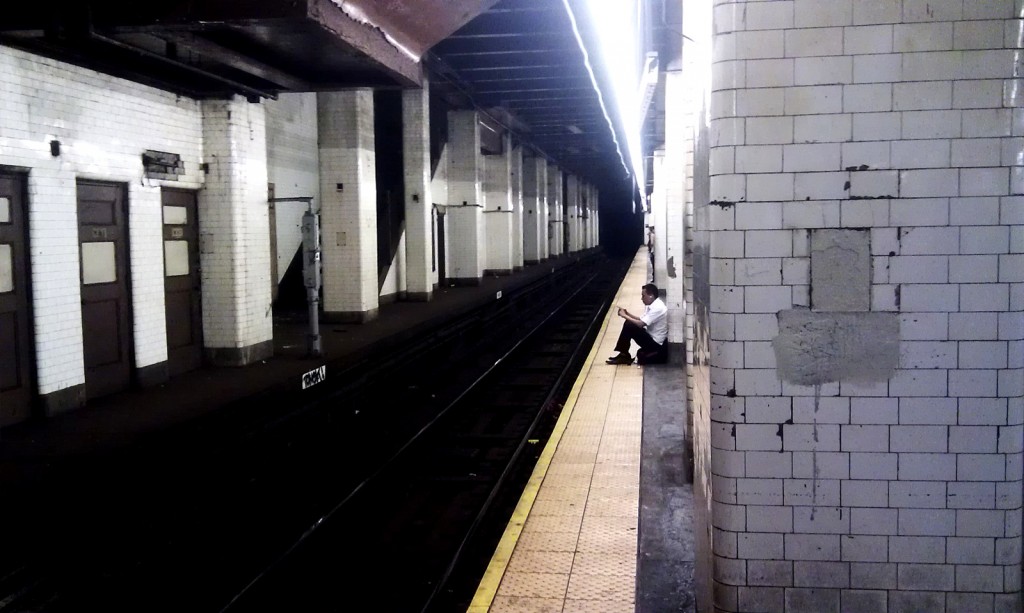 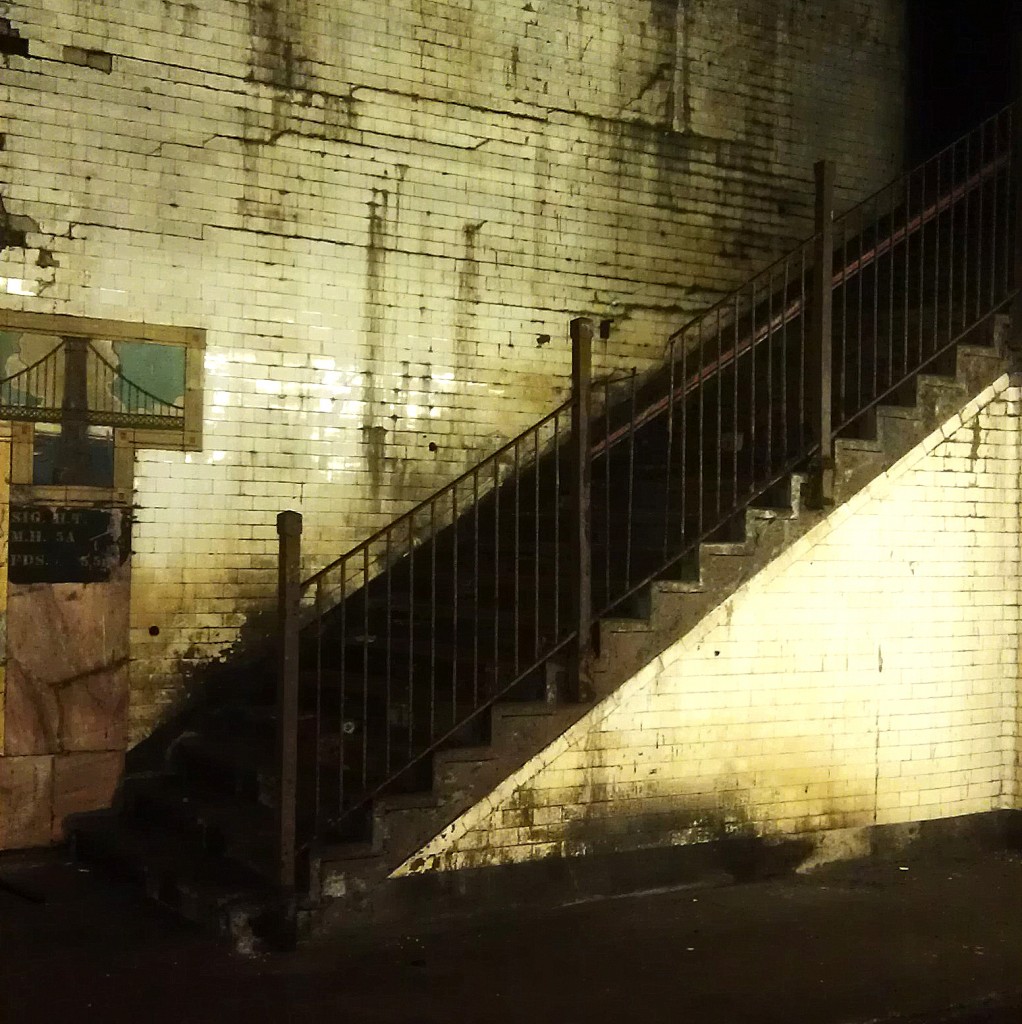 A run-down stairway in Chambers Station: Spooky or beautiful? 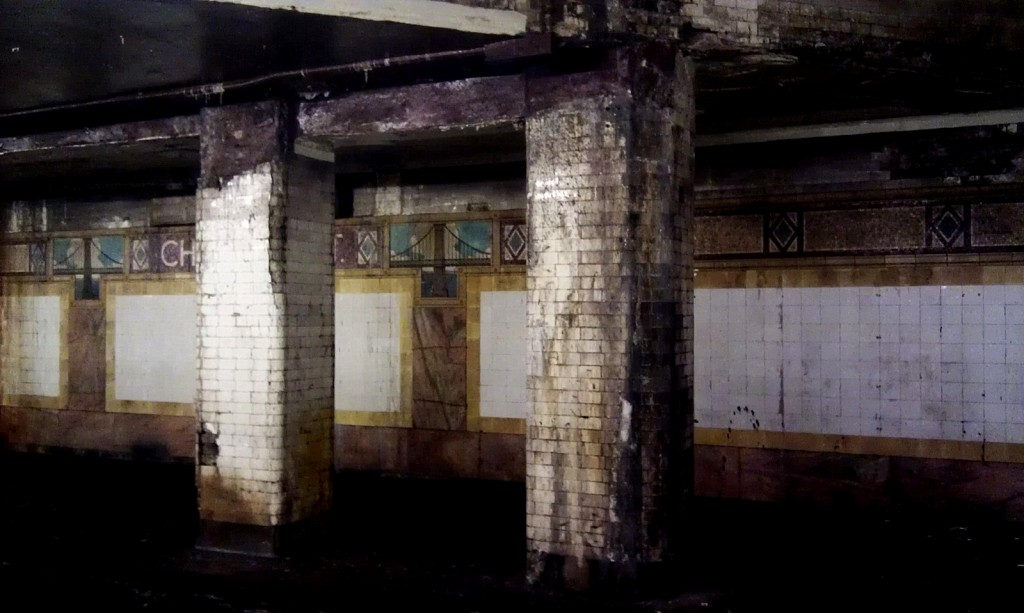 Pillars at Chambers street: The rusty colors give the station its own aesthetic

Trash is another major problem here. There is lots of garbage covering the tracks, despite the large trashcans are placed on the platforms. This makes the underground tunnels and stations a heaven for rodents. Rats are quite a phenomenon in New York. Wikipedia’s page on Rats in New York tells us that the urban legend that ‘there are more rats than people (8.3 million) in the city’ is not only true, but that this is also likely to be an understatement: some estimate that there are about four rats for every inhabitant of New York City. The MTA company, who owns and maintains the subway system, is therefore experimenting with strategies to diminish the population of rats in the underground. One strategy is to remove the trash cans from the stations to encourage travellers to take their trash with them. Strange as this sounds, it seems to work, or at least passengers seem to comply: it is, however, too early to state that this has had any influence on the rat population of New York. 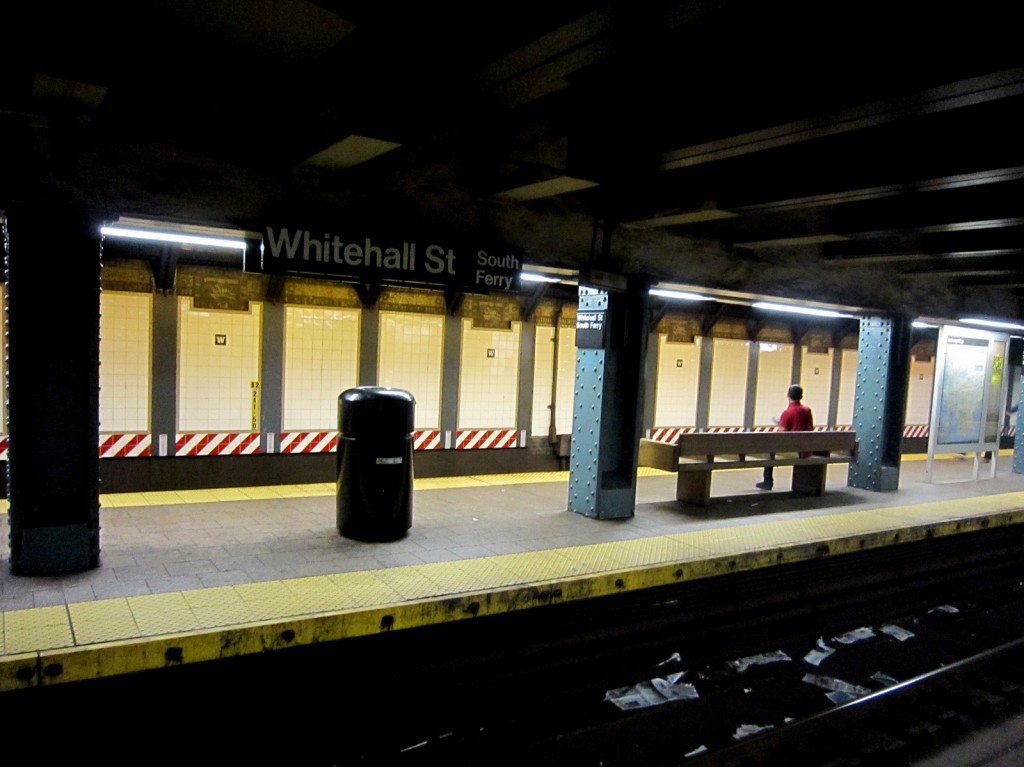 The standard layout of a subway station: A map, a bench, a sign, a trashcan and lots of trash on the tracks.

It is not all bad in the New York subway, though. It is an old megaproject that deserves respect for the way it is designed about a century ago. It can definitely use an upgrade (both infrastructural and aesthetic), but if you look around, you will see an old, beautiful and cleverly designed system: a museum of modern infrastructure.

Jolien Groot (Msc) is a lecturer in Social Geography and Urban Planning at the University of Amsterdam. Particularly interested in the social and creative entrepreneurship and the development of startup-ecosystems in cities around the world, she has done research on coworking spaces and the importance of social capital in Amsterdam and New York City. Lukas Franta (Msc) studied Urban Planning in Vienna and Urban Studies at the University of Amsterdam. His research focuses on geographies of protest and on cycling cultures and cycling policies of cities.

Nice article and pictures! Here in Glasgow the subway is also quite old with narrow tunnels, bouncing vehicles and a lot of noise. Contrary to NY though, the network is a lot less confusing, as is illustrated here: http://arranmoffat.co.uk/wp-content/uploads/tubeORIGINAL.jpeg

Hope you’re enjoying your stay there, I’m looking forward to your further articles 🙂

That was awesome, Jorn.

Hahaha that’s a great image Jorn. Are you planning on writing something on Glasgow as well? I would be very interested!
Have a great time there, looking forward to exchange all our travel stories when we’re back!

Perhaps I should try the ‘Glasgow Subcrawl’, a drinking game where you need to stop at each of the 16 Subway stops and have a drink at the nearest bar from the station. Will be quite a challenge I suppose, but perhaps some inspiration for a nice article as well 😉

Anyway, I’ve also got some other topics in mind to write about so keep checking the updates! 🙂

What about signage? This is a MAJOR distinguishing element of the NYC subway.

Like an NYC street, the subway platform is littered with chaotic words and signs that draw ppl’s attention in every different direction. The system maps hide among the advertisements. Even then, it is difficult to figure out exactly where your train goes.

It’s very much a system that you just have to experience to find your way – unlike a London or a Paris. Making mistakes, getting stuck on the wrong train is just part of the experience. Adding to this is the fact that no one cares if you get lost – very indicative of NYC culture.

This is part of why I like Moscow’s metro system (http://theprotocity.com/artfully-moving-millions-the-ornate-moscow-metro/) so much: because it’s a bit of a puzzle.

I’d agree that NYC’s subway is defined partially by its signage. Is there really a more iconic existing deployment of Helvetica in the world today? There’s a certain rough aesthetic that’s rounded into a strangely beautiful form by the font.

Thanks for your comment! The NYC subway’s signage fits just perfectly to the complexity of the service patterns, sometimes adding more to the already existing confusion of the unexperienced subway rider than helping anyhow. When exactly does ‘evening’ start? Or late nights? So, it is indeed as you said a system to experience, and in my eyes this contributes a lot to the ‘charme’ of NYC’s subway.
To be honest though, I don’t think the London Tube is less confusing considering all the branching lines in that system. Paris, for that reason, is way less complicated, as lines are not overlapping as much as in New York.

Lovely, charming puzzles? I think I have to disagree with you guys on this. I think a public transport system should be clear and easy to understand, otherwise it is just not very well designed or badly maintained, right?

Sure, but there’s more to public transportation than simple clarity. Transportation is also an aesthetic experience: it can be pleasant or unpleasant, sleek or rough, complex or basic. The end-user experience is something that transit authorities worry about, too.

After almost 47 years (and an update to the Helvetica typeface about 20 yrs ago), the signage of the New York City Subway still seems to be a topic of hate/love discussions for many subway users. The New York Times published a fun little article on the topic this week: http://www.nytimes.com/2012/12/09/magazine/who-made-that-subway-signage.html?ref=magazine&_r=0

Great read! Especially relevant now two people were pushed in front of the metro this month, with lethal consequences. Are there any signals within NY mentioning doors on the platforms as so many other cities implemented (Hong Kong, Shenzhen, London etecetera)? So to make the metro safer in this regard? 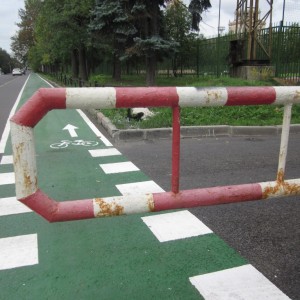 Automotive Moscow, discovered by bike. After Manchester and Vienna, it is time to explore another city by bike: Moscow....
© 2012 - 2019 The Protocity.com. All rights reserved.
Back to top