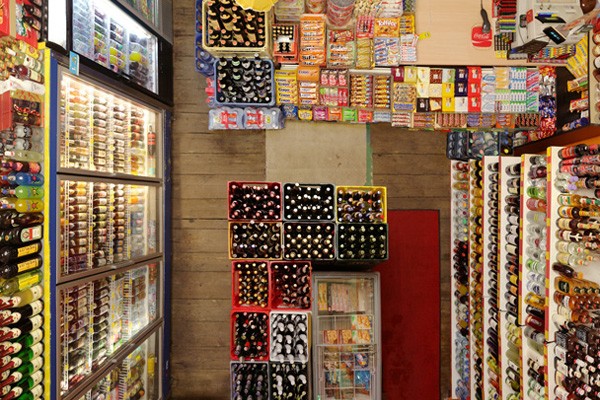 Around a week after I moved from Berlin to Amsterdam, I was out at night taking a walk when a sudden craving for chocolate overtook me. Looking around, the only thing open to me was the beautiful cityscape, its typical small canal houses, and the reflections of light on the water. As I strategically scanned the area, it slowly began to dawn on me: maybe they do not have them in Amsterdam. It was hard for me to imagine, and even more so difficult to accept, how life in Amsterdam could be possible without one: a Späti.

What is a Späti?

In its simplest incarnation, a Späti is a convenience store. Open 24 hours, day and night, Spätis are an intrinsic element of Berlin’s cityscape. Pretty much exclusive to Berlin, except maybe Hypezig, there are over a thousand of them and the one commonality that they share is their uniqueness. With a product range that includes the obvious, such as beer, wine (but in Berlin you drink beer), cigarettes, snack foods, soft drinks, and general convenience goods – you are just as likely to stumble over items ranging from volumes of poetry, Chinese pottery, or an almost complete collection of a hardware store. 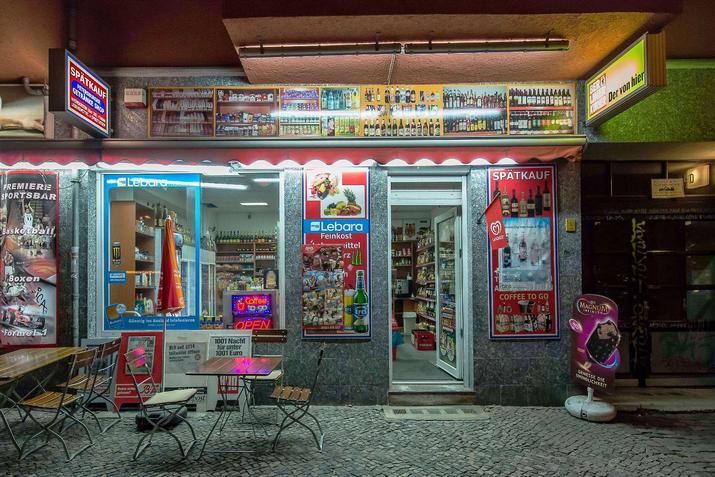 The typical shop front of a Späti: uninviting but still so familiar © Daniel Gregor

To distinguish their shop from others, the owners of Spätis become creative. Apart from integrating the expected Internet café or early morning bakery, you will equally find shops that feature a beauty salon, bookstore, travel agency or gallery. Yet the shop owners, who in most cases share a Turkish background, will regularly be found watching indistinct shows on their laptops behind the counter – an experience that belongs as much to the Späti as the bright neon lights and opening your beer bottle in store with the communal opener.

The Späti is Endangered

Although Germany is a secular state, Sunday is still sacred (yes, in that religious sense). The church enforces the continuation of closed Sundays for almost all commercial establishments. As a consequence, there are literally only seven supermarkets open on Sundays in Berlin. For those who are unable or unwilling to plan in advance their weekend shopping, the Späti becomes a lifeline. Sunday, the day with the biggest turnover becomes the Späti’s Sword of Damocles, because the shop-opening laws equally apply to the Spätis.

These shop-opening laws are German bureaucracy at its best; an inscrutable jumble of rules that are as archaic as they are contradictory. This is the reason why, thus far, the opening of Spätis on Sunday remained a legal grey area tolerated by the authorities. Still, the church demands the sacredness of Sunday, sparking a conflict over legal requirements and the Späti culture that has evolved over the years. If Spätis have to close on Sundays, they are unlikely to survive. 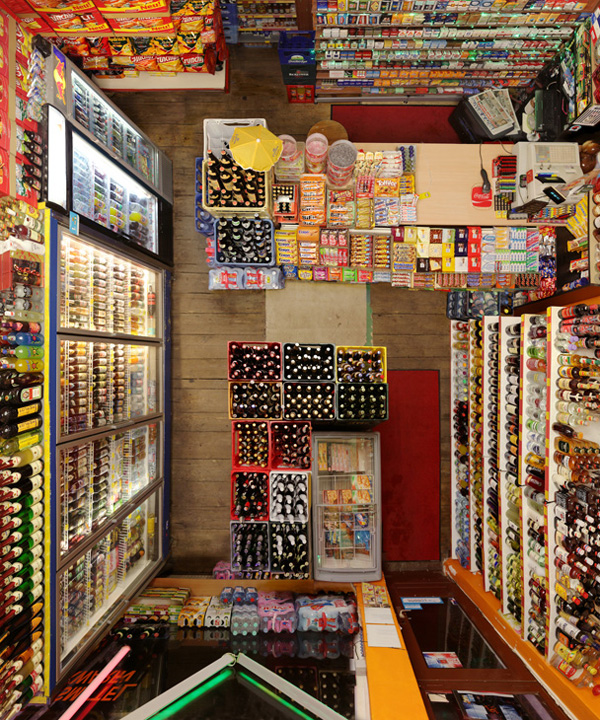 A bird’s-eye view of a Späti © Menno Aden

The Importance of the Späti

Even though there are Späti equivalents all over the world, this Berlin-style convenience store, the ubiquitous Späti is a local cultural phenomenon. It is not only part of the natural habitat of the mean Berliner; more importantly, it is also a communal central point in the neighbourhood. There is a certain feeling of hype attributed to the Späti (just considering the existence of an ode to the Späti and an app that helps you locate your surrounding establishments). yet there is also serious significance underlying its cult status.

Berliners are turning away from the artificial hipster lifestyle and the mushrooming cafés that are dominating the public space. The unaspiring look and character of Spätis stand for the rediscovery, and resurgence, of a beloved, ‘authentic’ unpretentious everyday life, all captured in one small place. As everybody in Berlin has their own local Späti, it remains a constant, and one that becomes part of Berlin.

Since public drinking is not policed, the streets are full of night owls and party tourists when the sun sets. Over the past two summers Spätis have started putting seating in front of their shops and in their own way replacing bars. The Späti serves as a contact point for people in the anonymity of city life. It is the place where people go before a night out, sure, initially because the beer is so cheap, yet over time simply get stuck, intrigued by the most basic and delightful dimensions of social life, as a reminder to casual bystanders of the nature of the “third place”, described by Oldenburg as a blessed state of irrelevance and idle talk. 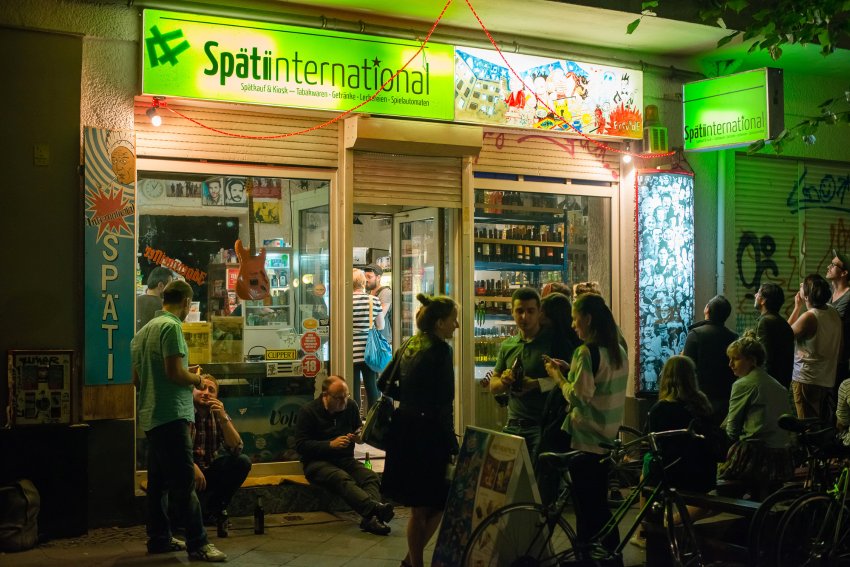 Night owls in front of the famous Späti International © spaeticrawlberlin

During daytime, the Späti supplies its neighbourhood with German or Turkish breakfasts, accepts packages or even offers emotional support. It is familiarity without engagement, appreciated on both sides. This makes the Späti proprietor the community’s favourite neighbour. After all, a Späti would be nothing without its shop owner.

Being forced to go home empty-handed after my walk I was wondering: what is the Späti-equivalent in Amsterdam, or in fact across all other cities? And how much do these places shape life practices in cities?

Starting off her education in urban planning, Daniela became more interest in social aspects of urban studies and the lived experience of urban space while doing her Master in Urban Studies. She has returned to her hometown Berlin after having stopped by in Amsterdam, Newcastle-upon-Tyne, London, and Oxford.
https://www.linkedin.com/in/daniela-brose-9603a58b 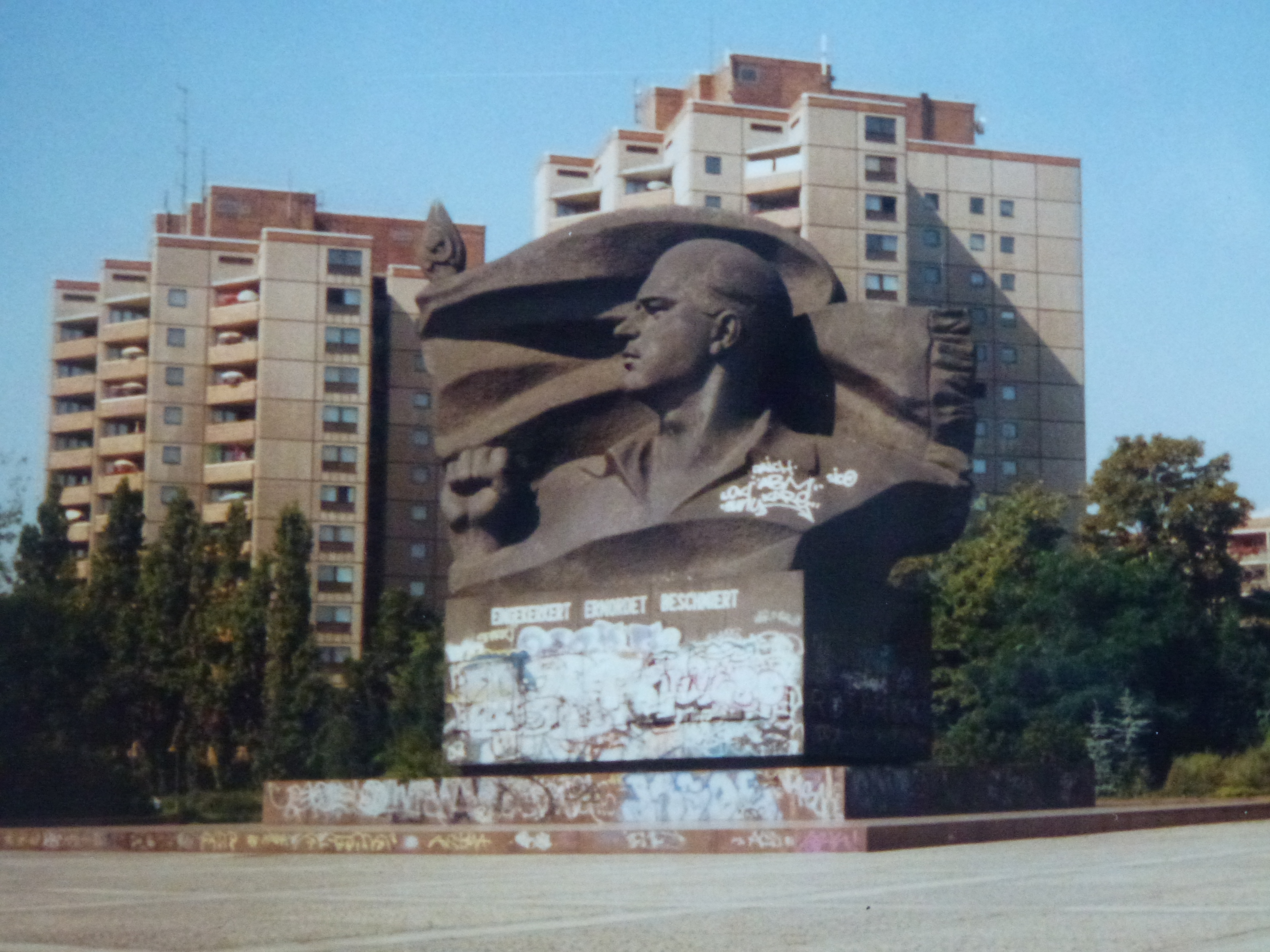 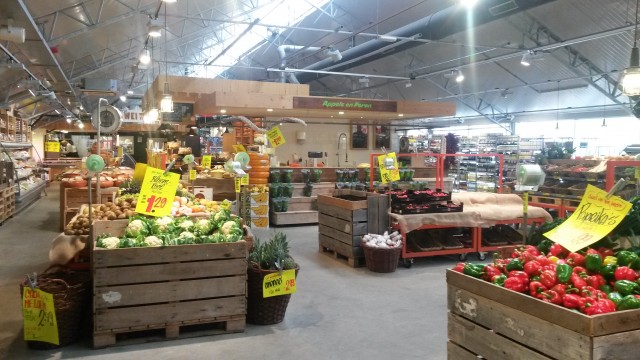 Great article! But “Spätis” are not just a Berlin based phenomenon. There are lots of them in the Ruhr-Area as well. Some people even say Cologne has the highest density of “Kiosks” or “Büdchen” per capita.

Hi JU, I might have been a bit overhasty assigning the phenomenon to Berlin only. However, it is probably right to say, that the word ‘Späti’ is being used mainly in Berlin and surroundings.
Would you say, that the Büdchen in Cologne are identical to the Spätis or is there something specific to them? I think it is very interesting to find out about the pecularities of these shops based on their local context.

good question 🙂 Most of the times colognes büdchen appear smaller to me than berlin spätis, but that might be just because of the physical structure of the buildings. They also sell liquor, magazines, candys and similar stuff. But indeed in surveys we found out that they are a common meeting point, like What you described as a “third place”. What i observed so far is, that they are slowly beeing priced out of areas which are experiencing social and economic upgrading. For example on the opposite site of where i used to live a kiosk was replaced by a tattoo shop 🙁

I, too, wonder sometimes how they survive. I have heard, that some of them have some sort of ‘side-business’ – whatever that means. What did you do the surveys for?

We did some neighborhood research here at the university of cologne. before that I was conducting qualitative Interviews in two areas here for my thesis. lots of ppl told me that Kiosks make the environment feel more “urban”, in a very abstract way. I guess they meant something like short distances and 24/7 availability…

In Amsterdam, you have the choice between the ‘nachtwinkel’, the nightshop, or the ‘snackbar’. In the first, you can basically buy anything you could possibly want, except for maybe a piano, or a live tiger. In the second, interest centers around the deep fryer and that most Dutch of staples: fries, kroketten and frikandellen.
Both kinds of shops/restaurants/kiosks close, however, sometime between one and two in the morning.
Then… you can go and check out that last resort: the ‘benzinestation’ or gasstation. They do a 24-hour run, every day. Even on Christmas morning. Now… fancy that.

Hi Daphne!
Thanks for the tips. I will be on the lookout for a Nachtwinkel then.
Same with gas stations in Berlin, but they’re not really an equivalent to the convenience stores, huh?
So where do I have to go in Amsterdam to get a tiger? 😉 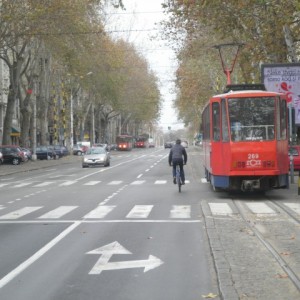 Belgrade and cycling: two things that do not go very comfortably together. Especially in the old city one will hardly see anyone...
© 2012 - 2019 The Protocity.com. All rights reserved.
Back to top