On a recent trip to Berlin, some posters and stickers in windows of the neighborhood of Kreuzberg and Friedrichshain caught my attention. They contained a clear message, saying: no tourists (see picture below and here). What’s behind this rejection of tourists in the hipster neighborhoods in Berlin? 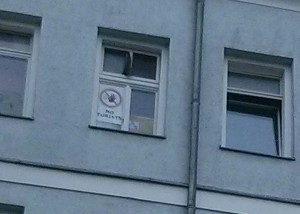 No tourists- poster in Kreuzberg, Berlin (picture by author)

‘The hipster’ is a term for a specific type of urban dweller, referring to the young, the hip, the well-educated but slightly poor crowd of people that nowadays can be found in particular neighborhoods in the city. Nowadays hipsters have not much in common with their 1940’s counterparts, for whom the term actually has been invented. Think of the beat-generation’s famous writers such as Alain Ginsburg or the famous Jack Kerouac among others, many of them quite popular in today’s hipster crowd. When the ‘hipster’ made its reappearance in the 1990s in Williamsburg in NYC, the meaning slightly changed towards a more consumerist account of the hipster, and many scholars accused the hipster of being a-political and thus a ‘danger to society’. This fear was mainly voiced in the German Feuilleton trying to deal and explain with the hipster-phenomenon that swept through the neighborhoods of Berlin from 2000 onwards.

As hipsters and their lifestyle are dependent on trends and trends are changing, a clear-cut definition of the hipster is doomed to fail in any way. The hipster is like a phantom everybody knows and has seen multiple times a day, but nobody can describe him or her comprehensively (Greif 2010).

Even though it is hard to define this urban phantom, we can argue that the hipster is connected to particular neighborhoods in cities. Think of Williamsburg and Bushwick in New York, Shoreditch and Hackney in London or Kreuzberg and Friedrichshain in Berlin. All these neighborhoods were transformed at least partly by the influx of hipsters who came for cheap rents into these more or less derelict neighborhoods. More and more cafés, bars, restaurants, galleries, and vintage shops are popping up boosting the neighborhood, you know the story. Neighborhoods get hip because its shops, nightlife, and cultural activities are attracting more and more of the urban phantom – the stereoptype everybody knows but no one wants to be part of.

The Hipster and the City

The lifestyle of this rather small segment of the urban society thus has become strongly connected to physical space. Bushwick or Kreuzberg not only refer to a neighborhood in a city, but as well to a particular lifestyle. They become symbolic for ‘the hipster’ and all that is connected to him or her: hip bars, vintage shops, vegan restaurants and certain music styles, thick-rim glasses, beards and so on. That way, living in a hipster- neighborhood almost immediately brands you as a hipster, and similar with venues in these areas: all hipster. In a way, there is no escape from the hipster- trap, either you are one because you live there or you are one because you frequent the venues; a very unfavorable situation for everyone having anything to do with the hipster neighborhoods. 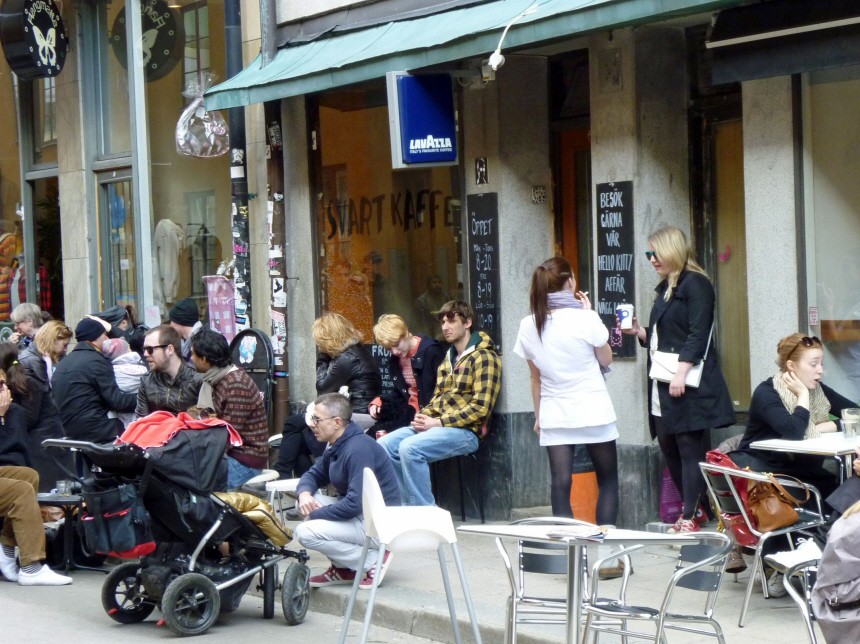 The hipster in their natural habitat: the cafe (Photo: Süddeutsche Zeitung)

All these ‘hipster’- neighborhoods seem to have a charm that not only attracts hipsters, but tourists as well. Many of these neighborhoods have bars, cafés, clubs or shops that are unique or try to be unique and attract tourists besides residents. Kreuzberg or Williamsburg are both destinations mentioned in travel guides as places to see or to visit, thus transforming the ‘hipster’ and his habitat into sights to see like a baroque castle or a monument. A lifestyle becomes an attraction. This is rather interesting, as we cannot observe the same touristification with other lifestyles or social groups, such as ‘working class’. No tourist guide would send to a working class neighborhood, but they send you to the hipster neighborhoods.

The attraction of hipsters and their lifestyle made these neighborhoods important tourist attractions. Kreuzberg in Berlin is part of guided bus tours sending tourists on an urban safari to spot the hipsters. Tourism more and more seems to become a spectacle, and to experience the hipster in its habitat is apparently part of that. Berlin’s bus tours (for instance the ‘Wall & Lifestyle Tour‘) through the streets of Friedrichshain provoke counter- actions by the local residents, fighting the ‘easyjet- jetset’, by taking pictures of the tourists and putting up stickers and posters in the area. Residents are afraid of being priced out of the neighborhood, if more and more hipsters and tourists are coming to frequent the hip bars, shops or clubs. Keeping the character of the neighborhood is one of the main goals, making this initiative yet another slightly conservative NIMBY- action. 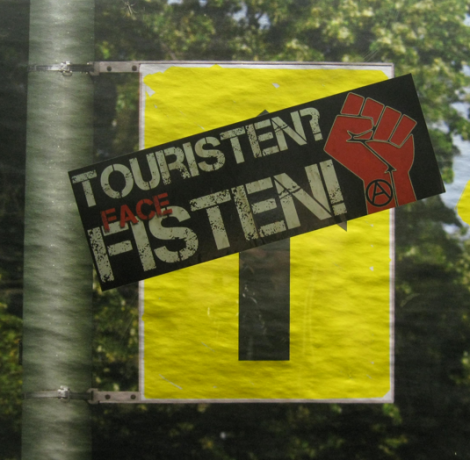 The tourist industry capitalizes on the hipster, bringing the lifestyle and the neighborhoods in the focus of tourism. Offering bus tours is only one idea, providing dedicated hipster tourist guides is another. Riga for instance published a hipster tourist guide, listing hipster- cafés, bars or restaurants.

Cities like Berlin, Riga and many more are relying more and more to the attractiveness of the hipster neighborhood for tourists, young and old, wealthy and less wealthy, hip and not hip. Strategies in city marketing seem to shift: Rather than focusing on the history of places or buildings or local personalities, the lifestyle of the hipster is brought to the front. A whole group of the urban society thus is ‘consumed’ by hordes of tourists who are flocking into once derelict neighborhoods contributing to the hipness of these areas. However, the fear of being priced out of their neighborhood due to the hordes of tourists coming to Kreuzberg seems to be going too far, there are other probably more influential forces driving gentrification than tourism. 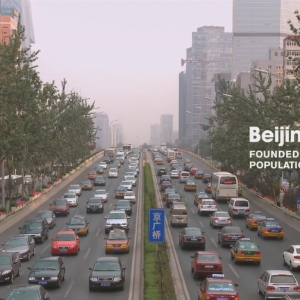 Urbanized: a documentary that takes us on an exciting world tour to teach about urban design.  Directed by Gary Hustwit ...
© 2012 - 2019 The Protocity.com. All rights reserved.
Back to top