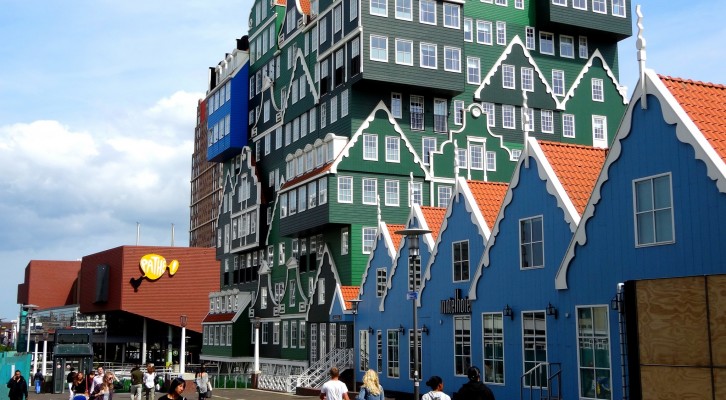 For those of you expecting a critical assessment concerning the ridiculousness of the ‘theme park-look’ the city of Zaandam recently obtained, I will disappoint you right from the start. Through this blog I would rather like to show the positive effects this ‘plastic looking’ city centre creates for the economy of the city as well as for its inhabitants. After introducing Zaandam and explaining the changes that were made to the city centre, the need of cities like Zaandam in the current cognitive-cultural economy will be discussed. 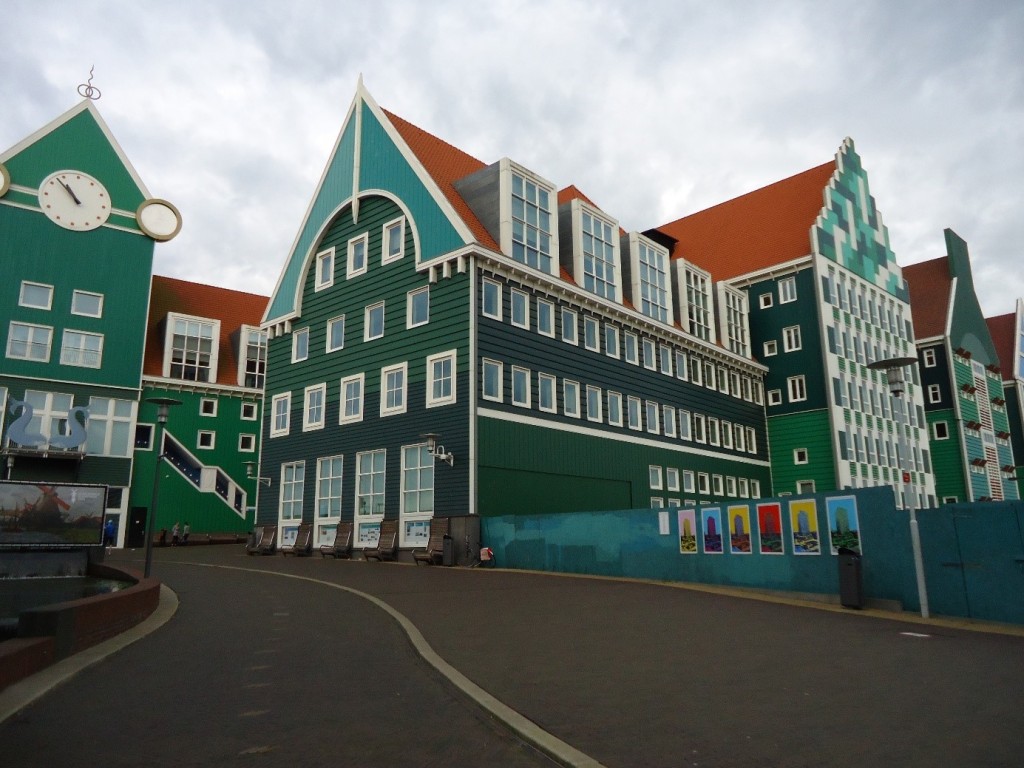 Zaandam Central Station and the city hall. (Photo by author)

Zaandam is in fact a city within another city, namely Zaanstad. Zaanstad is a city adjacent to the northwest of Amsterdam. Zaanstad as a whole includes over 150.000 inhabitants, known as so-called Zaankanters. The municipality of Zaanstad has been created in 1974 by uniting the city of Zaandam and six surrounding villages. Zaandam itself is situated in the southeast of what is now ‘Zaanstad’, so it is located closest to Amsterdam, and entails about half the municipality’s population, namely 75.000 people. With a population density of 2252 inhabitants per square kilometre and an OAD (address density) of about 3000, Zaandam can be placed in the highest urbanization category of the CBS (Statistics Netherlands).

Although Zaandam and the Zaanstreek, which is the area of Zaandam and its surroundings, may be unknown to many, they have a rich history. The Zaanstreek flourished in the 17th and 18th century as one of the first industrial areas in the whole world. This industry began with sawmills to provide Amsterdam with wood for shipbuilding. Soon the Zaanstreek provided Amsterdam and the Netherlands with industries of all kind. At the peak, 630 mills decorated the banks of the Zaan with their characteristic Zaanse architecture. All of these mills were working to manufacture, among others, wood, paint, oil, flour, mustard and paper. Zaanstad ever since remained to be an industrial city, housing many industries, by which the cacao processing industry was the most significant. Over a quarter of all the cacao in the world still gets processed in the Zaanstreek, making the area the biggest player in this industry in the entire world.

The Changes in the City Centre

From 2003 onwards the city centre of Zaandam, is being rebuilt. This project is called Inverdan and has been designed by architect Sjoerd Soeters. The goals of the project are to strengthen the social and economic structure of Zaandam, to spatially improve the city centre and to reinforce the identity of the municipality. A number of new offices are built, the shopping centre has been extended and renewed, a new city hall arose (next to the new Inntel hotel), and the project also includes the construction of several apartment buildings. The bus station has been relocated as well, in order to create a public transportation hub. The buildings in the project are characterised by the modern interpretation of the Zaanse architecture. Although the city renewal project is not entirely finished yet, the new city centre has already managed to reach the second place in the election of the best inner city 2013-2015 of the Netherlands, and to win the silver FIABCI Prix d’Excellence in 2013. 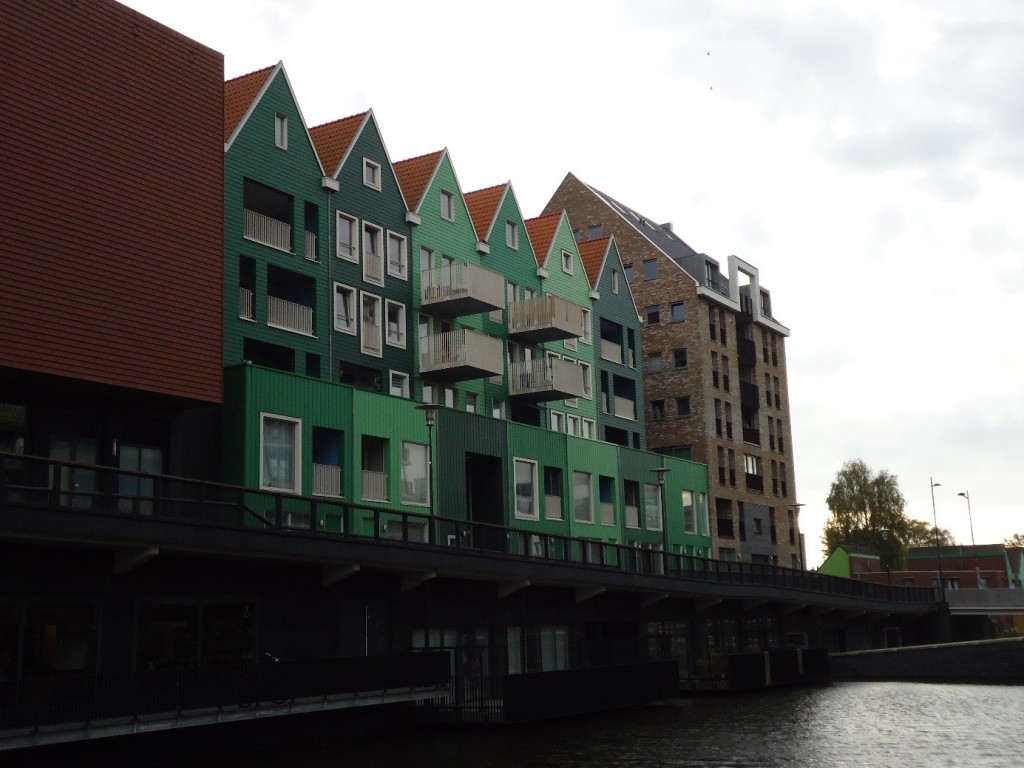 Zaandam and the Cognitive-Cultural Class

As expected, given the historical and contemporary industries, Zaandam has always been a city for the lower and middle class. The Inverdan project was not an attempt to change this. The housing prices of the newly built apartments and one-family houses are for instance quite affordable; one can buy an apartment in ‘Murano’ for just € 107.500. In Amsterdam, a similar size apartment could easily cost three times as much. Although a subset of the lower and middle class would perhaps like to live in Amsterdam, it is hard for them to afford this. The new urban class, that has increasingly emerged in the last few decades, seems to have easier access as well as a bigger strive to live in the city. This new ‘cognitive-cultural class’, as Allen Scott names it, consists of highly educated professionals which are mainly employed in sectors such as media, business and financial services, the technological industry and the cultural industry.

This cognitive-cultural class thus generally prefers to live a metropolitan life in one of the world’s bigger cities. They appreciate authenticity as an important value in their lifestyle. It is therefore unlikely that a city like Zaandam will appeal to these people very much, as this city isn’t global enough and is now characterised by its fake plastic facades that are supposed to represent historical Zaanse architecture. For the well-functioning of Zaandam however, this should not be regarded as a problem at all. ‘Global cities’ are often becoming unattainable to most people, as Jate Bleeker and Bas van Rossum illustrated on this blog earlier concerning Vancouver. This story increasingly applies to Amsterdam as well. Zaandam provides the people for whom Amsterdam has become too expensive a rightful place in the city, as Zaandam itself is urban, but also given the fact that it is only a twelve minute train journey from Zaandam to Amsterdam’s central station. Many residents of foreign capital cities, that are of a much bigger scale, would probably be jealous of the opportunity of living so close to the ‘main’ city centre and yet so affordable.

Most of the negative comments regarding Zaandam’s recent developments thus highlight the fake-ness of the renewed city centre. It cannot be contested that several aspects of the city centre are indeed rather fake. The buildings are covered in plastic facades. There is a waterfall, which probably is the most unlikely landscape element one could create in the flat Netherlands, that leads into a canal in the middle of the shopping street. This canal used to be there before, but was gedempt (‘filled in’), hence the name of the shopping street: Gedempte Gracht. Here one will primarily find ordinary chain stores like C&A and H&M, so there is nothing ‘typically Zaans’ about the retail facilities. Noteworthy, the main pull-factor attracting visitors to Zaandam seems to be the recently established Primark.

But who cares about the fake aspects that most people seem to appreciate after all, considering the fact that Zaandam provides the people pushed out of Amsterdam with housing and facilities that are attractive to them. Where the justness of the city of Amsterdam seems to be diminishing, Zaandam jumps in to at least bring some justness to the Amsterdam Metropolitan Area.

Dionne finished the bachelor Interdisciplinary Social Sciences at the University of Amsterdam and is currently pursuing a MSc in Urban Studies at this university as well. Her research interests concern inequality in the city and the public space.

Adaption and Adoption in Amsterdam-Noord 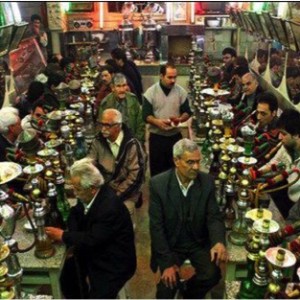 Tehran, Iran's capital and its primary city with 8.5 million people, is experiencing a particular socioeconomic phenomenon....
© 2012 - 2019 The Protocity.com. All rights reserved.
Back to top