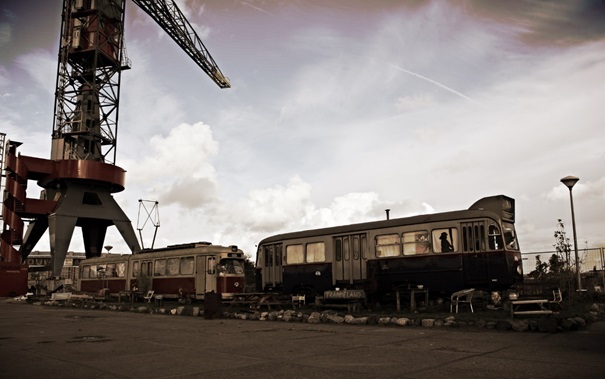 Adaption and Adoption in Amsterdam-Noord

This is a story of the old versus the new, of conflicting city cultures, of gentrification of the mind – this is the story of Amsterdam-Noord. “Noord” is Amsterdam’s iconic city district located on the northern banks of the IJ-river, perhaps best known for the free ferries that bridge its physical separation from the rest of the city.

In recent years, Amsterdam-Noord has seen a surge in popularity, both in actuality and in the media. Unfortunately, much of the existing coverage fails to do justice to Noord. It is either depicted as a historic area readily being colonized by the hipsters, or a backward blue-collar neighborhood rich in social and economic poverty. Neither picture is complete – and this story aims to raise attention to the diversity of the area. It also seeks to caution against claims of authenticity and the importance of framing, while simultaneously acknowledging the need for Noord to move forwards and embrace the new economic and social opportunities that lie ahead – for everyone. 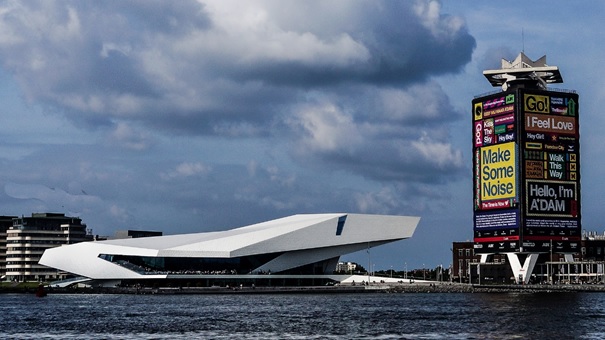 Film museum EYE and the A’DAM tower, seen from the southside of the IJ. Credits: Tina Monumentalia, Creative Commons. Taken in May 2014.

Let’s go for a walk

If a group of unsuspecting Amsterdam tourists decides to venture out on the free ferry ride across the IJ to Amsterdam-Noord, one of two scenarios may play out. In the first scenario, the group takes a left towards the Eye Film Museum, a hard-to-miss architectural flagship development. In doing so, they’ll pass A’DAM, the 80-meter tall tower formerly owned by Shell and currently being redeveloped to house a restaurant, sky bar, two dance clubs and a hotel. As they continue they will encounter a number of modern condominium flats catering to a growing group of Amsterdammers that is contemplating a move north across the IJ. Moving on, they enter the more industrial cityscape that is very characteristic of for this western half of the Buiksloterham area in Amsterdam-Noord. The group will see many traditional manufacturing buildings that are reminiscent of earlier decades, when this area was at the heart of Amsterdam’s port trade economy. Nowadays, there are new start-ups in the creative and digital media industry, iconic for the post-industrial city that Amsterdam has become. After half an hour of walking, our imaginary group of tourists is well on their way along the former wharf, and will pass a multitude of the vintage and industrial-styled (coffee)bars we have come to associate with the archetypical ‘hipster’ audience.

Alternatively, our group may continue straight ahead after exiting the ferry and make their way into the Van der Pek neighborhood. Along the recently renovated Van der Pekstraat, the neighborhood’s main avenue, they will first pass the artisan pizzeria Il Pecorino, only to realize that it is complemented by more traditional neighborhood shops and brown cafés. If anything, our tourists need not be well-trained urban scholars to realize this unusual combination of retail and consumption venues suggests a neighborhood in transition. This eastern half of the Buiksloterham area is entirely residential in nature, and was built in the early decades of the 20th century to house the blue collar workforce employed at the adjacent NDSM docks. As of 2015, however, that economic job engine is long gone and over the decades the neighborhood has become both culturally diverse but also socioeconomically deprived. The further up north they walk, the fewer latte macchiato’s  they will be able to get. Similarly, whereas the recently renovated houses at the beginning of the Van der Pekstraat suggest that no time has passed since their construction many decades ago, the dilapidated housing stock further away from the ferry tells a different story. Indeed, this is also a neighborhood rich in unemployment, social tensions between long-time residents and recent migrants, and a place where distrust towards outsiders, public or private alike, is high and rising. 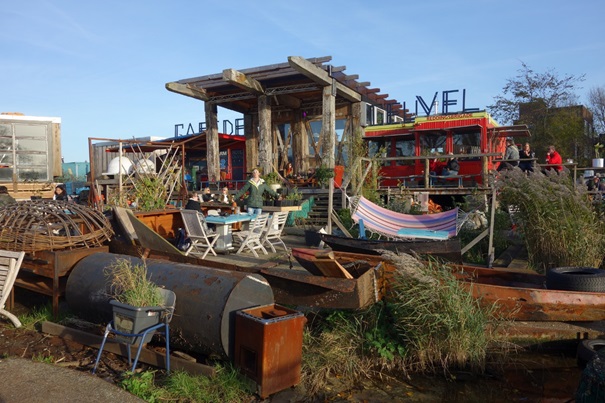 Venturing into the great unknown

To whoever wonders how the city district is perceived by outsiders these days, the following headline speaks volumes: “[Noord] – van afvalputje naar hippe stek” (“from waste pit to place to be”). It was the title of an extensive feature article that the Dutch newspaper NRC Handelsblad ran on Amsterdam-Noord in 2013, which documented how the abandoned NDSM docks rose back to life over the course of the past decade. Noord is said to be for Amsterdam what Williamsburg, Brooklyn is for New York and Kreuzberg for Berlin. It is seen as a symbol of the post-industrial city and the creative economy, but also as a site for the ‘hipster’ movement. It has become a space, both imaginary and real, that has been embraced by the cultural avant-garde in Amsterdam and beyond.

Although this emergence of a new urban space on the edge of the IJ-river is real, it also needs to be put into perspective. Let’s talk numbers: Amsterdam-Noord is a mid-size city in itself with a population count of almost 90,000. The newly recaptured urban space as described above, however, is part of the abandoned brownfield sites where few if any people resided. Even if the directly adjacent neighborhoods – those most likely impacted by the process of urban change – are taken under consideration, a ‘mere’ 12,000 people might consider themselves part of this wave of renewal. Indeed, the vast majority of residents in Noord are not directly affected – positively or negatively.

Let’s return to our group of tourists once more. What is the likelihood of them taking either of the two routes after they arrive ‘northside’? Any tourist handbook will direct them to EYE Film Museum on the left. If the new Amsterdam municipal policy has anything to say for it – to better spread tourists across the city – they may even be encouraged to explore the first part of the Van der Pekstraat, recently renovated and now ready for external consumption. But they are not likely to engage with the city district at large – not even with those life-time residents who live just a 5 minute bike-ride up north. Of course, the tourists in this story may very well be understood metaphorically for outsiders in general. People love ‘Noord’, for all its mystery and authenticity, but in practice rarely anyone ventures beyond the Tolhuistuin and the IJ-kantine. 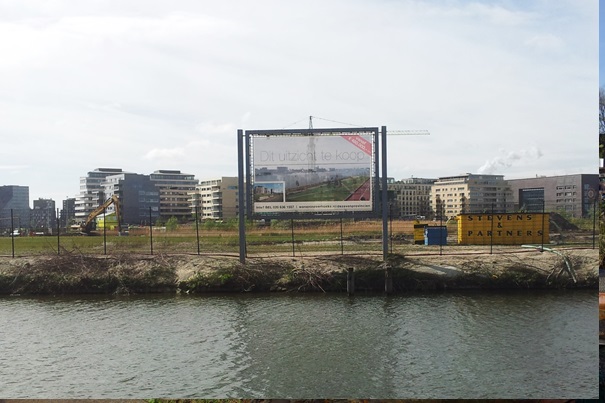 Gentrification as a crossroads

Amsterdam-Noord is caught up in two increasingly diverging lived experiences. On the one hand, there is the experience of the ‘newcomer’, the recent arrival or occasional visitor from ‘down south’: people who come to consume what remains predominantly their own cultural products – be it the double latte macchiato or modern art gallery. These are the ‘hipsters’ that think they are in foreign territory, but in fact their life world in Noord is perpendicular to that of the actual long-term residents.

It is the ‘original locals’ that constitute the second group, those that have either lived in the social housing dwellings for generations or moved in there more recently, but not so much by choice. These are the people that feel increasingly disconnected from their own neighborhood.

These two diametrically opposed life worlds meet each other at the crossroads that is gentrification. In the Van der Pekbuurt and its adjacent neighborhoods, gentrification is both real and imaginary, both complex and contested. The housing stock remains mainly social housing, with limited but increasing privatization efforts. The retail landscape is changing faster, suggesting that either the consumption preferences (and budget) of the locals has taken a swing, or that new customers from elsewhere are abound. More than gentrification on the ground, however, Amsterdam-Noord is being gentrified in the minds of both its lifetime residents and eager newcomers. 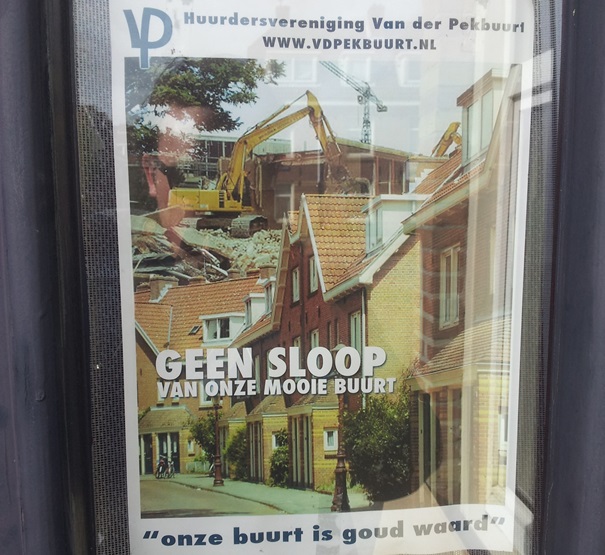 The revival of north as experienced by the longtime-residents. Poster reads “No demolition of our beautiful neighborhood”. Credits: Thijs Olthof, taken in April 2014.

The urban revitalization on the northern banks of the IJ-river is an important step forward for Amsterdam, in its continuous effort to be competitive on a global scale as both a city of production and consumption. It is logical that this process impacts the adjacent neighborhoods, and we should be cautious of preservation of the status quo just for the sake of preservation itself. Given the political and economic realities the question should not be if Amsterdam-Noord should be allowed to gentrify, but rather how this process can benefit and include the most people.

The title of this text reads that it is a story about “adaption and adoption”. Newcomers in Noord – and they are and will be plentiful – should stop merely adapting and sanitizing their new urban environment to their own needs and desires. Rather, they should adapt themselves, and be reflexive about the existing sociocultural context in which they choose to be immersed. Similarly, it is those who have lived in Amsterdam-Noord for most of their lives that can confirm, better than anyone, that the economic reality of their city district has radically shifted over the decades. Now is the time for them to be open towards adopting a renewed perspective on ‘their Noord’ as well. This is not to claim that they must en masse start drinking wheatgrass smoothies and ride their kids to school on bakfietsen. It means that they must at least be willing to embrace the new economic opportunities that lie ahead. There is no rule that states that a long-term resident of the Van der Pekbuurt could never go into 3D printing. But it does require an institutional framework that facilitates interaction between the two groups.

This is not a plea to downplay the real impact of gentrification and its risks. Rather, this is a plea to break down imaginary divisions between groups, and a caution against stubborn generalizations and exclusionary framing strategies. It is a demand to the district government of Amsterdam-Noord, who has long retreated to its ivory tower after writing the 2003 Masterplan that started it all: take back your governing responsibility. This is a call for a unitary vision on Noord that captures both the old and the new, that is both recognizant of the economic opportunity but also committed to inclusion. Let’s strive together for a renewed Noord that combines the best of both worlds. 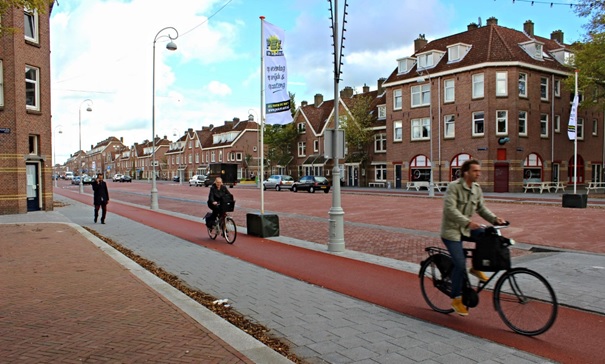 Thijs completed his bachelor degree at University College Utrecht, where he majored in geography, public policy and political science. He currently pursues an MSc in Urban Studies at the University of Amsterdam, where his research focuses on the dynamics of urban economies. 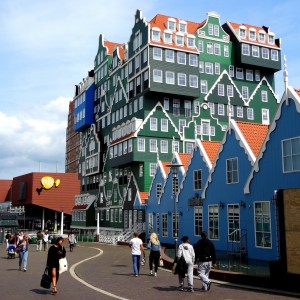 For those of you expecting a critical assessment concerning the ridiculousness of the ‘theme park-look’ the city of Zaandam...
© 2012 - 2019 The Protocity.com. All rights reserved.
Back to top