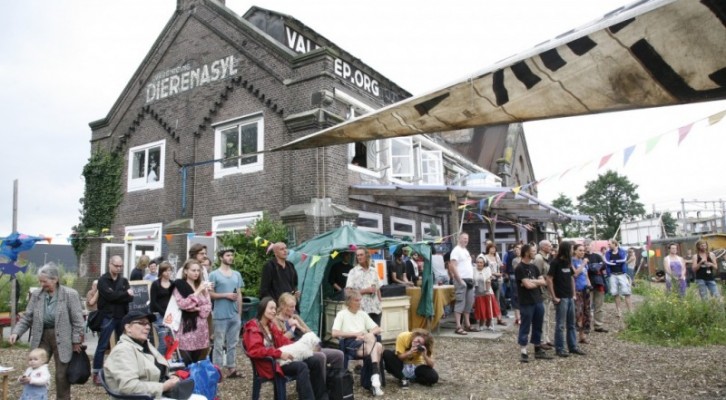 The Story of Op de Valreep, A Squatted Social Centre in Amsterdam Oost

Urban planning was once – perhaps at its best, defined by Patsy Healey as “managing our coexistence in shared spaces.” Planning for co-existence first and foremost requires recognition of differences and antagonisms in the city. Different publics have different interests as well as different amounts of power in society and decision-making processes. The state apparatus, operating within a context of power and inequality, thus adopts persuasive, co-optative, and sometimes repressive measures to respond to all these different vectors of pressure.

While the myth of the state as the sole guarantor of public interest continues to lose a great deal of its appeal under the rapidly growing influence of urban neo-liberalism, civil society comes to be seen as a de facto agent in the creation and implementation of alternative planning strategies. Civil society as such (grass-roots organizations, social movement, etc.) organizes itself autonomously or faces the risk of co-optation while compromising and adjusting itself in order to survive within the capitalist framework. It plans grass-roots alternatives, of the people, for the people, by the people projects, that sometimes (more often than not) have to be realized against the state apparatus. Conservative urban planning has become even more conservative in light of the entrepreneurial turn in planning, which encourages planners to regulate the usage, production and reproduction of space to cater the needs of private-sector developers, corporations and what not. City officials waving their ‘Creative City’ flags in the air speak of urban diversity and vibrancy while state-led gentrification swiftly sweeps the unwanted under the rug, clearing any sign of their backward clutter off of the fabulous urbane front of the Cosmopolis. 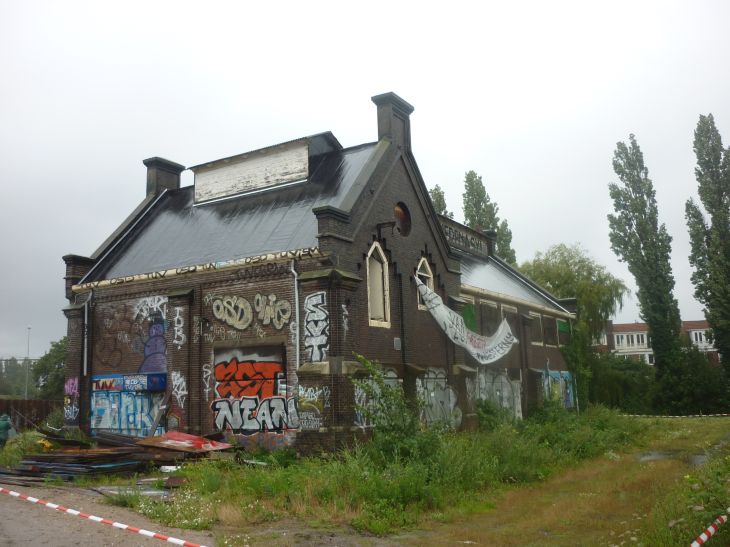 Amsterdam is among the many cities today wherein neo-liberal ideologies have pervaded municipal policies and left the city mourning the death of its once sought ideals regarding universal housing access and democratic engagement. In 2009, Justus Uitermark predicted that the future generation Amsterdammers will not enjoy a just city. In the past eight years, privatization and austerity policies have been developed and implemented at such speed that have left even the savviest of critics in awe of their own under-estimation. In the past, the achievements of urban social movements in Amsterdam attracted the attention of Henri Lefebvre, Susan Fainstein, and Edward Soja amongst the many who praised it as a just city. Much of this idealization did in fact derive from the fact that Amsterdam outperformed other and in particular American cities on the basis of criteria such as equitable housing, sustainability, health and welfare (see: Gilderbloom, 2008). But, to Uitermark, a more important precondition for the just city is that residents have control over their living environment, meaning that they engage with the polity of which they form part.

In the 1970s, Amsterdam witnessed the momentum of its Squatting movement as a major political force against the imposition of capitalist fantasies upon urban space. By preventing space from being redesigned to maximize profit, squatters contributed a great deal to the propagation of an alternative view of the city, grounded in de-commodification of the housing stock, universal accessibility and maximized affordability, resident engagement and direct democracy (Uitermark, 2006). However, in the late 1980s with the introduction of neoliberal ideologies to housing policies, the interaction among the grass-roots movement and national policies started to change. Soon housing subsidies to promote housing construction were cut back and privatization was promoted as the preferred means for upgrading. As a response, the housing stock began to  segregate along socio-economic and (at a later stage) ethnic lines. The interaction officially came to an end in 2010 when the Dutch government banned and criminalized Squatting. 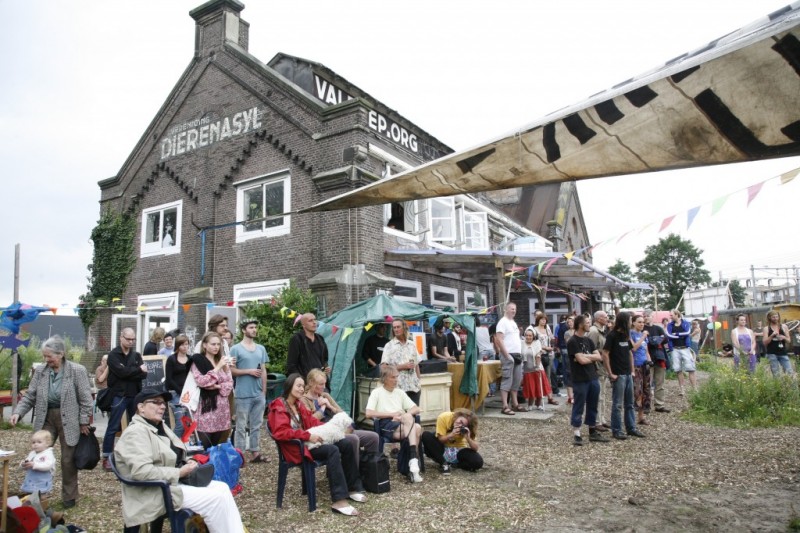 The Case of Op de Valreep

What you just read was a long but important preface to the story I would like to tell now. The story of Op de Valreep (literally and oh-so-appropriately translated from Dutch to English as ‘just in time’). Op de Valreep used to be an abandoned animal asylum located in the east of Amsterdam until it was squatted in 2011. The building structure belonged to a large-scale regeneration project called Oostport, aiming to transform the area by creating up-scale housing, work, and commercial spaces. It had been abandoned for years and was on the verge of dilapidation when it was occupied by the squatting collective in 2011. The subsidized plans by the project developers initially aimed to turn the building into a temporary sales office (and later a posh café); however, the run-down structure and lack of built-in infrastructure (De Valreep to this date doesn’t have infrastructure for running water, gas, or electricity on-site) had made the realization of this plan too big an undertaking.

The plan was nevertheless cancelled at a later stage, partially because of public pressure (from de Valreep), and also due to re-evaluation of its commercial viability. Through a remarkable collective effort, a community was brought together at the animal asylum to transform the derelict site into a lively social centre that now hosts a diversity of programs on a regular basis and appeals to a variety of publics. Op de Valreep is a significant project, not only because it poses a timely and vital critic to forces of state-led gentrification that are changing the face and core of our city but, more importantly, because it stems from a bottom-up need within the neighbourhood: a dire need for open and inclusive social infrastructure. 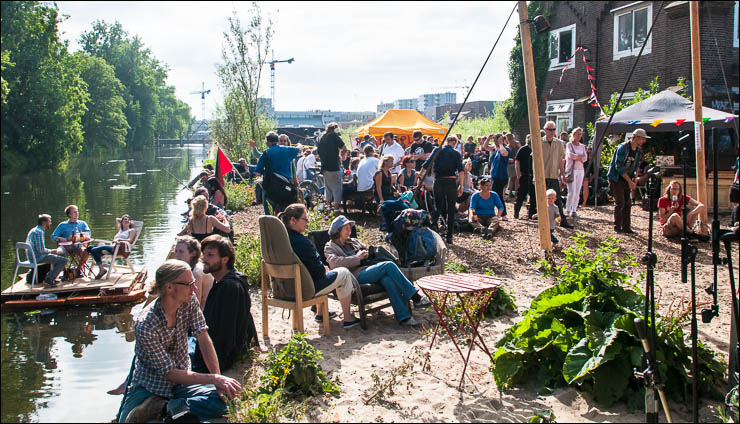 The once disregarded animal asylum has undergone an amazing transformation. When the building was first occupied back in 2011, it was in extreme state of decay. The ground was covered with feces and waste. There were shattered windows, leaking walls, and broken ceilings all over. Refurbishing was anything but an easy task but was nonetheless taken up by the collective who did it on a voluntary basis. In turn, not only did they not get any credit for their efforts from the local authorities, they actually received a threat of a fine between €25,000 and €500,000 and possible incarceration for a period of 6 months for performing illegal construction activities on a monumental building.

The social centre, despite its outreach and success, has constantly been harassed, condescended and threatened by state and police authorities. It is also interesting to point out that de Valreep had proposed – already from day one – to rent or buy the building, without any subsidies on one condition: that it remains a non-commercial social centre. But the city council and project developer are not willing because they don’t believe that the squat can be made into a viable place in a legal way.

De Valreep has been under threat of eviction since the very first day it was established, but today this threat is more serious than ever. In fact, the eviction could happen any day. One may ask: why is there such little tolerance within the City policy of Amsterdam for a grassroots alternative to a top-down plan designed within a generic and context insensitive mega project? Is it because the social centre stands as a confrontation for the Amsterdam planning elite in terms of their failure in living up to the premises of providing for the common good and addressing public interest? Is the just city of Amsterdam so long dead that not even the littlest of alternative forces can survive the machinery of gentrification? I think I will rest my case there.

@Squatter sounds it clearly says “The interaction officially came to an end in 2010 when the Dutch government banned and criminalized Squatting” – great article!

Perhaps it was a typo that was corrected, notice the day gap between Squatter’s comment and yours. 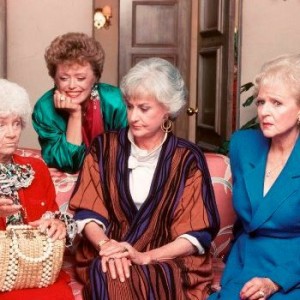 Where and how do I want to live? Every one of us faces this question sooner or later, maybe just once or, presumably,...
© 2012 - 2019 The Protocity.com. All rights reserved.
Back to top