London, often said to be Europe’s response to New York, is kind of hip, has great pubs and some astonishing architecture. Like in New York, rich and poor live side by side in this extensive city, and in the center the royals are watching all city life. In the recent years, something changed in the picture of London, something new and not too familiar entered the realm of London’s streetscape, and you might already have an idea what is meant: yes, it is the bicycle. 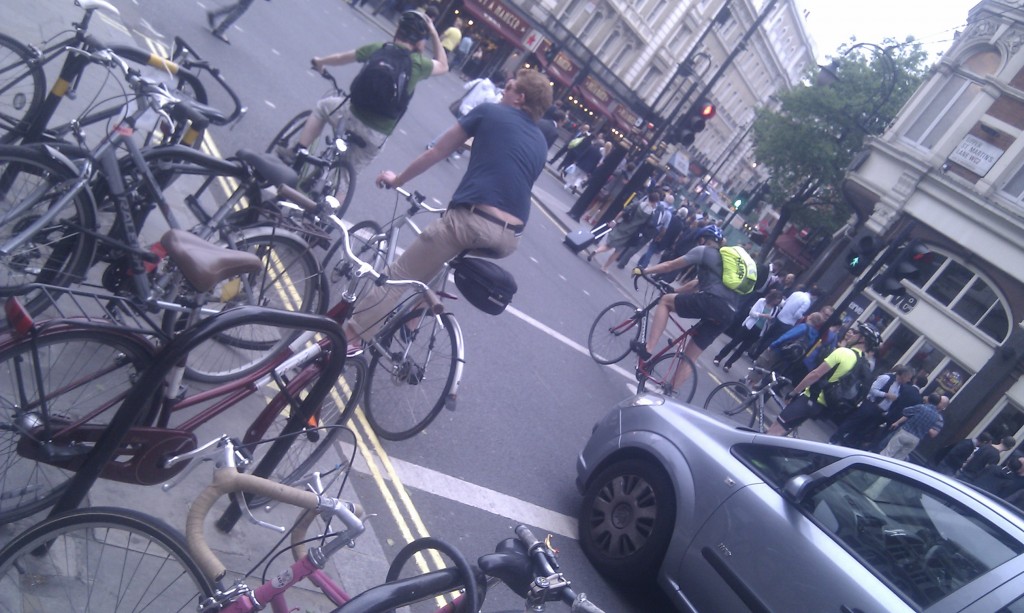 Like other cities on the continent London is suffering from increasing traffic problems due to the amount of commuters entering the city by car. A congestion charge set a couple of years ago in 2003 that tries to mitigate car commuting to the city of London and a bike rental system called Barclays Bikes (or more colloquially referred to  as ‘Boris Bikes’) have been introduced. Both new developments in London’s traffic management policy were and are fueled by the current mayor Boris Johnson (hence the nickname for the rental bikes) and his predecessor Ken Livingston.

Additionally, London pursues an ambitious policy to extend the bike network throughout the city, including the introduction of so called ‘cycle highways’, dedicated well designed (‘well designed’ means safe) cycling routes from the city center to the outer boroughs alongside large streets. Since London is not that experienced, close cooperation with the Dutch Cycling Embassy was introduced a few years ago, and the Dutch influence is visible in the design of the new bike routes in London such as with the occurrence of bike boxes at traffic lights show (see picture). Including cycling into London’s traffic policy seems to be so radical that government officials speak of a ‘cycling revolution’ in London. Now, we are very curious about the cycling experience in London… 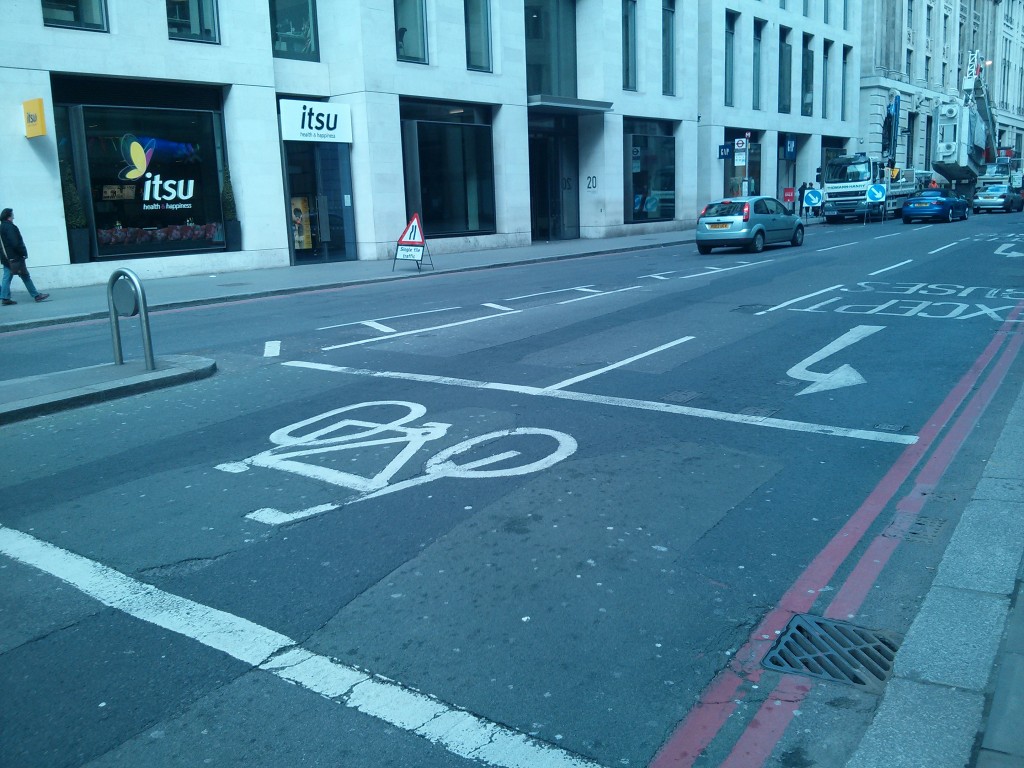 When visiting London this spring, I dared to rent a Boris Bike. Renting is surprisingly easy: subscription is not necessary (though possible), and rental fee for a bike for a 24h is 2 Pounds with unlimited journey for 30min. A yearly subscription is 90 Pounds. Renting just requires a credit card and there you go! The Boris Bikes are heavy and robust bikes, sometimes I had the impression the car will get more damage than my bike in a crash. However, bikes are equipped with gears so biking is quite easy on London’s hilly and congested roads and around every corner you will find another bike station to stall your own rental. Still, cycling in London for the non-British is a challenge, just for the simple reason that driving directions are different. Getting your confusion straight where to turn, where to queue and from which side to expect other traffic takes a while and your full concentration is necessary while cycling. Not only once the continental European cyclist in London went on the wrong side of the road almost crashing into an approaching car. Once driving directions are no problem anymore, the average cyclist sees himself stuck in London’s traffic: On roads with three or four lanes, plus a bus lane. All manageable until you have to turn right, which means you have to cross all lanes towards the middle strip with your bike. Through speeding cars, and against all buses, a real challenge and only for the brave.

As space on streets is scarce, cyclists often share lanes with buses; remember the usual London postcard with the big red double decker buses cruising through the city. Buses have often a dedicated lane on streets, and it is allowed for cyclists to use the bus lane normally. Imagine having one of those huge red buses in front of you, seeing what happens in front of the bus is almost impossible. Due to the buses frequent stops cyclists have to overtake stopping buses quite often, and sometimes another bus is in the station. So two buses to overtake, together with your average bike, it is not unimaginable you might not succeed. As a result, you might see yourself in one of the most uncomfortable positions: in between two buses. 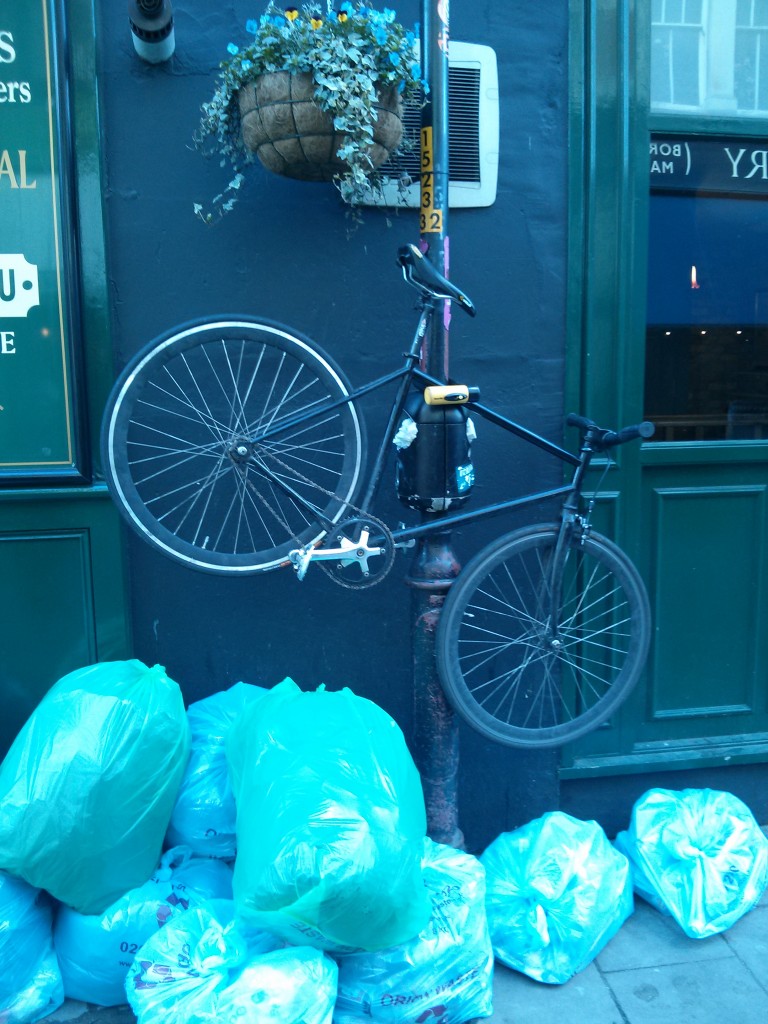 However, cycling seems to become much more popular in London, as more and more residents start to use the bike on their commute, and cycling safety has entered the public discourse, especially as there are still some deadly accidents happening. A lot of employees are cycling to their work, especially as businesses in the city of London are encouraged to provide bike storage space for their employees and provide financial support. Seeing a business employee on a bike is not rare; it almost seems like the ‘common’ cyclist in London is male and wears a helmet (which the author can totally understand). Mountainbikes are the most frequent type of cycle, probably due to the hilly topography and the large distances. Upon entering one of London’s hip areas the cycle style changes and becomes cycle chic: the single speed or fixie bike becomes predominant.

London has to go quite some distance to become a true bike friendly city, but progress in the last years was large. Cycling is still challenging, but the amount of filled bike racks and half empty rental bike stations throughout the city shows that people are increasingly making use of this alternative means of transport. Keep it on, London! 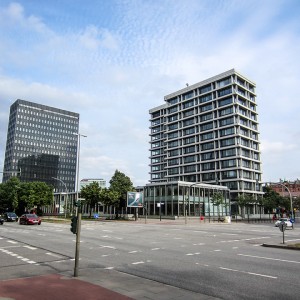