Over the past few years, many urban scholars (e.g. Sassen) have been stating that cities will become increasingly important drivers of the global system, both economically as politically, and that national borders consequently will become more and more invisible. Assertions like this often go hand in hand with terms as ‘Global Commodity Chains’ or ‘World City Networks.’ Briefly, the message is that cities should look around them in order to find all possible forms of cooperation with other cities, both within as across their own national context.

On the other hand however, one can hardly neglect that most cities are still very much embedded in their local – as well as national cultural and geographical context. If we zoom in at Western Europe, we noticed that both before as after the Treaty of Westphalia in 1648, cities within existing national borders have competed with, and even turned against each other. This particularly remained to be the case in countries in which two cities with more or less comparable sizes have had the ambition to become the most influential city of their country. As a result, the less successful of the two then often became saddled with the so-called ‘second city syndrome’. Examples of those rivalries can be found in Scotland (Glasgow vs Edinburgh), and to some extent also in Portugal (Porto vs Lisbon) and Italy (Milan vs Rome). Also, city rivalries can exist on a more regional scale, as for instance in England (Manchester vs Liverpool). 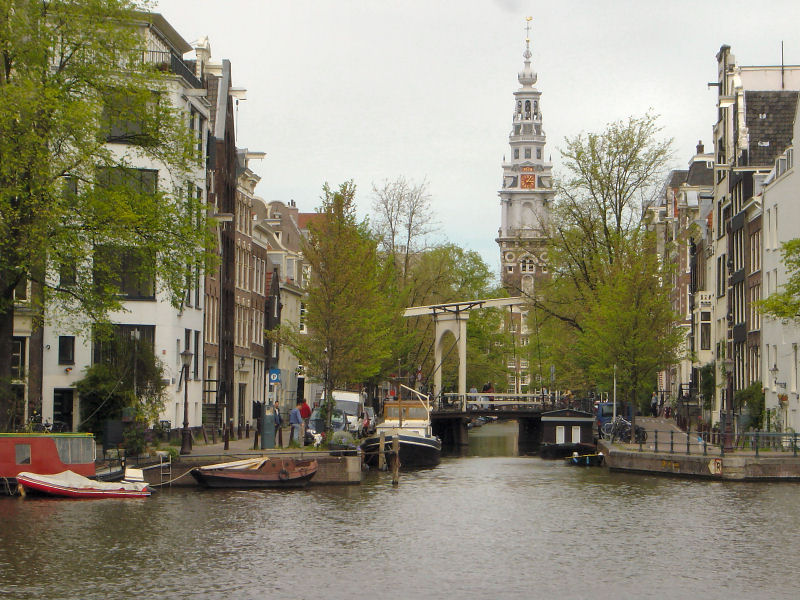 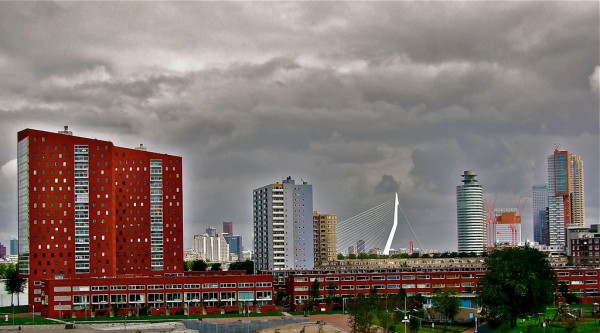 Another primary example, on which this article will focus, can be found in The Netherlands, namely the rivalry between the capital city of Amsterdam, historically based on finance and trade, and the port city of Rotterdam, historically based on their docklands and its associated working-class mentality. Still today, if one goes to the Rotterdam area, it will probably not take too long before someone starts complaining about Amsterdam’s alleged arrogance, pedantry and sanctimony, not to even start with their disgust of Amsterdam’s successful football club AFC Ajax. There also is the saying that “the money in Holland is earned in Rotterdam, divided in The Hague and spent in Amsterdam.” In this article, I will concisely try to describe where this apparent antipathy comes from, and how this developed over the past four centuries.

400 years back in time brings us to the year 1613. In this year, Amsterdam started to realise its most exclusive city extension project: the today still world famous canal belt. During the 16th century, Amsterdam slowly but surely developed itself towards the focal point of global trade, and due to the massive attraction of both wealth and people, a large city extension plan was inevitable. The newly emerging elite, many of them earning their money by trading and investing in innovative financial companies as the VOC, was able to reside along one of the three prestigious, newly dug canals. In the 50 years that followed, Amsterdam managed to reach a population of 160 000 and thus became the largest city of Europe after London and Paris.

In the shadow of this unparalleled success, 60 kilometres southwards, the city of Rotterdam started to gain importance within its local region, in which cities as Delft, Dordrecht and Gouda always used to be dominant. Increasing trade, particularly with France and England, brought Rotterdam a lot of employment and hence also Rotterdam’s population grew in these decades: towards almost 60 000 in 1675. The fact that there was already some obvious rivalry going on between the two cities, is proven by the fact that Amsterdam signed a ‘mail contract’ with England in the 1660s, which meant that merchants from Amsterdam had the first opportunity to read the latest trade and market news from London, way before the merchants from Rotterdam got the chance to, which must have caused a lot of frustration among this latter group. Perhaps this already had to do something with the fact that in 1676, nuncio Pallavicino from Cologne stated that: “Rotterdam is a city that is not very well-known yet, but which has been progressing a lot lately… Some merchants from Amsterdam told me they are afraid Rotterdam will once outdrive Amsterdam… Indeed, its geographical location is much more attractive.” 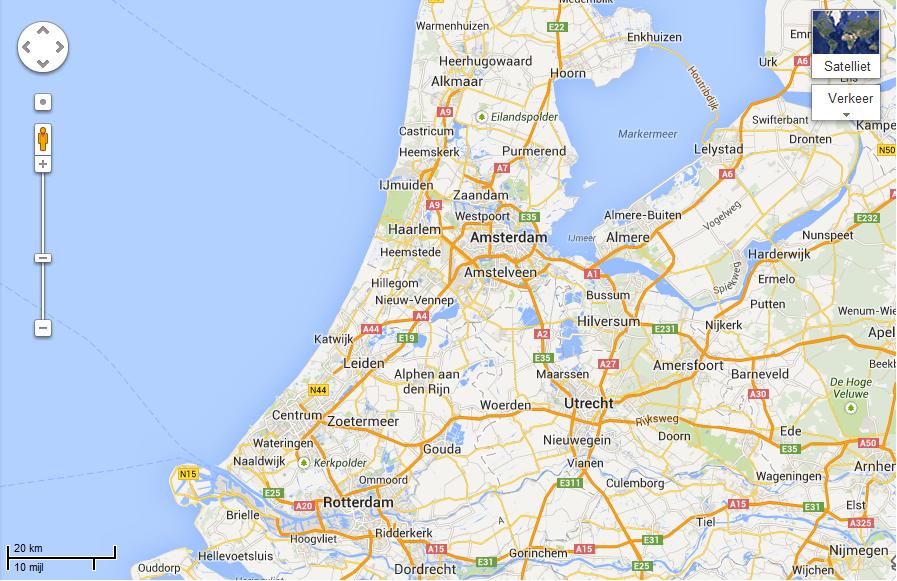 The geographical locations of Amsterdam & Rotterdam: while ships needed to go through the ‘Markermeer’ (formerly ‘Southern Sea’) to reach Amsterdam, Rotterdam is easier accessible from the North Sea and also has a fast natural connection to Germany by the big rivers. Source: Google Maps, 2013

During the 18th century however, in which the Republic of the Netherlands lost its leading role within the world trade market again, Amsterdam obviously remained the leading city of the country, still benefiting a bit from its reputation and its financial markets. Rotterdam, at the same time, falters a bit, but then already starts to become a gateway city: transiting bulk including steel, grain and ore, through the rivers towards Germany. It takes the city till the second half of the 19th century though when it actually manages to profit from this geographical advantage: by building the ‘Nieuwe Waterweg’, it improved its connection to the North Sea, and thus its gateway position. Amsterdam immediately responds by building the comparable ‘Noordzeekanaal,’ but according to historical observations, Rotterdam was now doing much better, which was exemplified by the better state of the public buildings within the city, as opposed to Amsterdam where a lot of 17th century monuments fell into decay and often even got demolished.

It is remarkable to see how the situation keeps changing: in the aftermath of the Second World War, in which Rotterdam is left with a heavily bombed city by the Luftwaffe, it actually manages to revive quicker than its bigger capital brother in the north. This partly results from the fact that the city of Amsterdam decided to boycott trade with the Germans for a while, as a result of lasting war-anger, while the city of Rotterdam apparently had less problems with that. The flourishing port of Rotterdam, which became the biggest in the world between 1962 and 2004, brought the city some relative wealth, and so it was Rotterdam that was able to build an extensive subway-network before Amsterdam did. More recently though, since we have reached the era in which urban economies made the shift from post-fordist industrial sites towards cognitive-cultural centres, the traditionally tolerant, creative and cozy Amsterdam again retook its role as leading urban centre of The Netherlands.

Since Rotterdam, as well as nearly every city in the world today, also aims to become this creative, innovative and knowledge-intensive city, there actually is some cooperation taking place between the two traditional competitors. For instance, some knowledge-exchange seems to exist between Amsterdam and Rotterdam regarding the architectural design clusters in both cities, albeit mainly via spill-over effects by individuals switching from one firm to the other. On the other hand, plenty of examples can still be found of rivalry or mutual annoyances. The fact that Amsterdam decided to invest in a huge container terminal for its port in 2001 was a big eyesore in Rotterdam: according to them, Amsterdam refuses to accept that their port is not the most important in the world anymore as it used to be four centuries ago. Moreover, the two cities still compete sometimes in their candidacy for important cultural centres, or major sports events, like the bid for the Olympic Games of 2028 (which are currently withdrawn by the Dutch government). 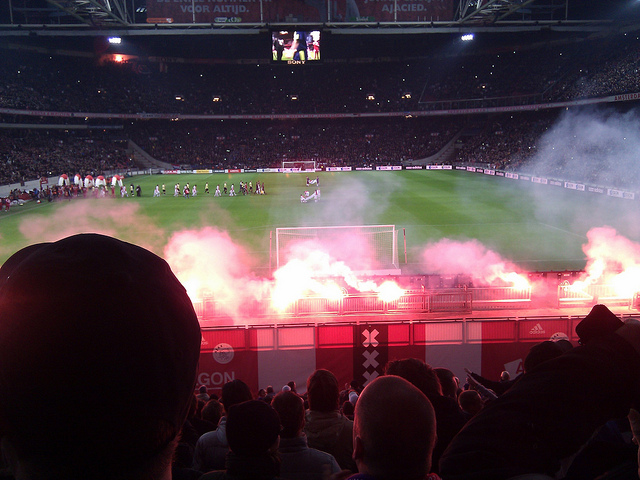 Matches between Ajax and Feyenoord always cause tense atmospheres. Photo by alamagordo

Even though it seems that the fierce rivalry is nowadays particularly present when the football teams Ajax and Feyenoord are involved, one should not neglect the fact this legacy of historical rivalry is still hidden somewhere within most of the people, and probably in particular within those from ‘second city’ Rotterdam. According to Sassen and others, Amsterdam and Rotterdam should put this aside and focus on collaboration, to profit from each other in order to compete with other European city networks. Will this be anytime favourable indeed? Or can it actually be beneficial sometimes, when cities compete with their neighbours just to stay at the ball? Anyhow, I am already curious about the mutual relationship between the two ‘- dams’, as well as between cities in surrounding countries, within the 22nd century. 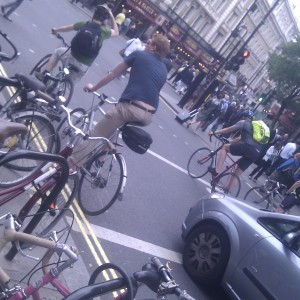 London, often said to be Europe's response to New York, is kind of hip, has great pubs and some astonishing architecture....
© 2012 - 2019 The Protocity.com. All rights reserved.
Back to top