Organic supermarkets are popping up all over Amsterdam. These chic, alternative supermarkets mimic similar designs, styles and quirks of the popular cafes found throughout cities. These stores can be instantly recognised by their abundance of jam jar glasses which were never truly jam jars (what jam jars come with a handle?) and ladders which seemingly go nowhere. While there is nothing wrong with jam jars and whimsical ladders, the growing number of spaces in cities targeted at the ‘cognitive cultural class’ is cause for concern. 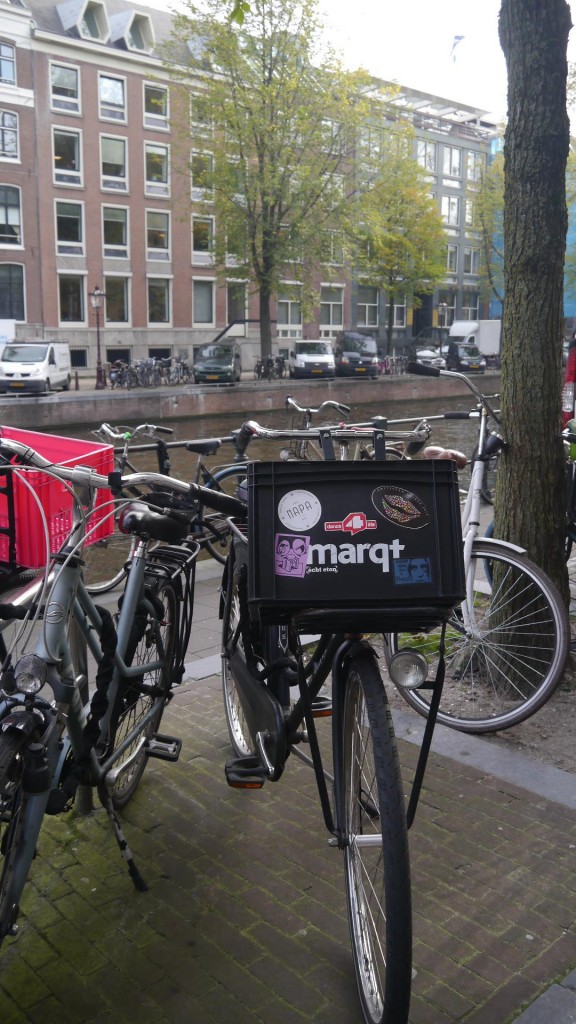 The ubiquitous mart bike box, a common sight in the hipper neighborhoods of Amsterdam. (picture by author)

Cognitive cultural capitalism is a term coined by Allen Scott. A key component of this new phase of capitalism is the top half of workers are in a diverse sector of industries based on new digital technologies and the consumption of culture. These workers are characterised as being highly educated, and are known for partaking in more open ended tasks. ‘Hip’ cafes have been repeatedly signposted as a third space for them and organic supermarkets are going the same way. This begs the question, how is the increase of these kinds of spaces affecting Amsterdam? And just what will be the consequences?

The emergence of organic supermarkets

Organic supermarkets like EkoPlaza or Marqt are not an unjust business. Embedded between the extensive effects of industrialisation within our society and across our biosphere is our confused, complex and problematic relationship with food. The escalating commodification of food has led to mass environmental degradation, compromised quality and increased environmentally determined health issues. As public awareness is raised and consumer consciousness provoked the market for organic supermarkets has opened. One major critique of the movement is it can be considered elitist; this complaint is exemplified by these supermarkets.

These supermarkets are functioning as so much more than a place to buy soya and quinoa. As society is increasingly constructing and expressing identity through consumption practices they play a vital role for enabling customers to express their ethical beliefs.

Supermarkets used to be considered boring places to grab bread and milk whereas those able to shop at organic supermarket are doing so in an exciting and vibrant place. This is illustrated by the blurring functionality of organic supermarkets which is also considered an aspect of the cognitive cultural spaces. For instance you can walk into Ekoplaza off Stadhouderskade and get a haircut, do some work whilst sipping on coffee in the cafe and then grab some Vietnamese pho on the way out. Moreover you could further express and construct your identity by placing this cultural food in a Marqt branded bike basket and hashtagging a picture of your favourite groceries on instagram. All of this sounds great, however these supermarkets implicitly exclude a massive proportion of the Amsterdammers and paradoxically it is the people who help directly and indirectly run the city; the service- orientated underclass. 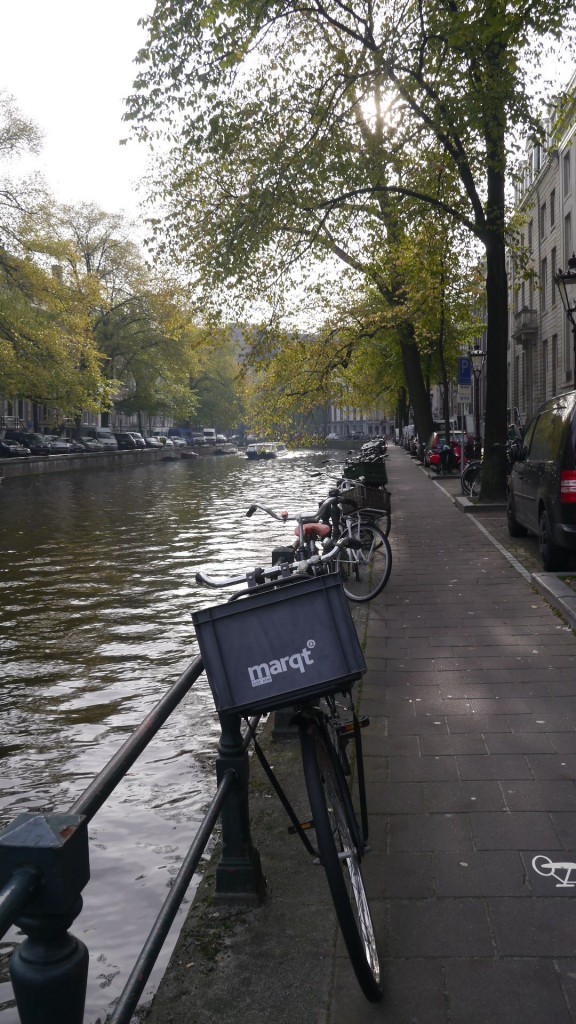 Marqt offers you to construct your identity: Instagram your recent shop in your Marqt-bike with #marqt. (picture by author)

The service orientated underclass is another term coined by Scott categorising the lower tier of the new economy based on flexible low-wage employment. Jobs typically have less autonomy than the Cognitive cultural workers but requiring strong capacities for critical decision making often within the context of human interaction.

Working as a waitress within this labour market, to me, this no cash sign symbolises organic supermarkets exclusively as a place for the cognitive cultural workers. In placing this red sign at the front of the shop they aren’t considering the thousands of employees that work in the myriad of cafes, restaurant and bars in Amsterdam who live off tips. In doing so, they erect a barrier between the space and part of the community see (see one of our earlier posts here). 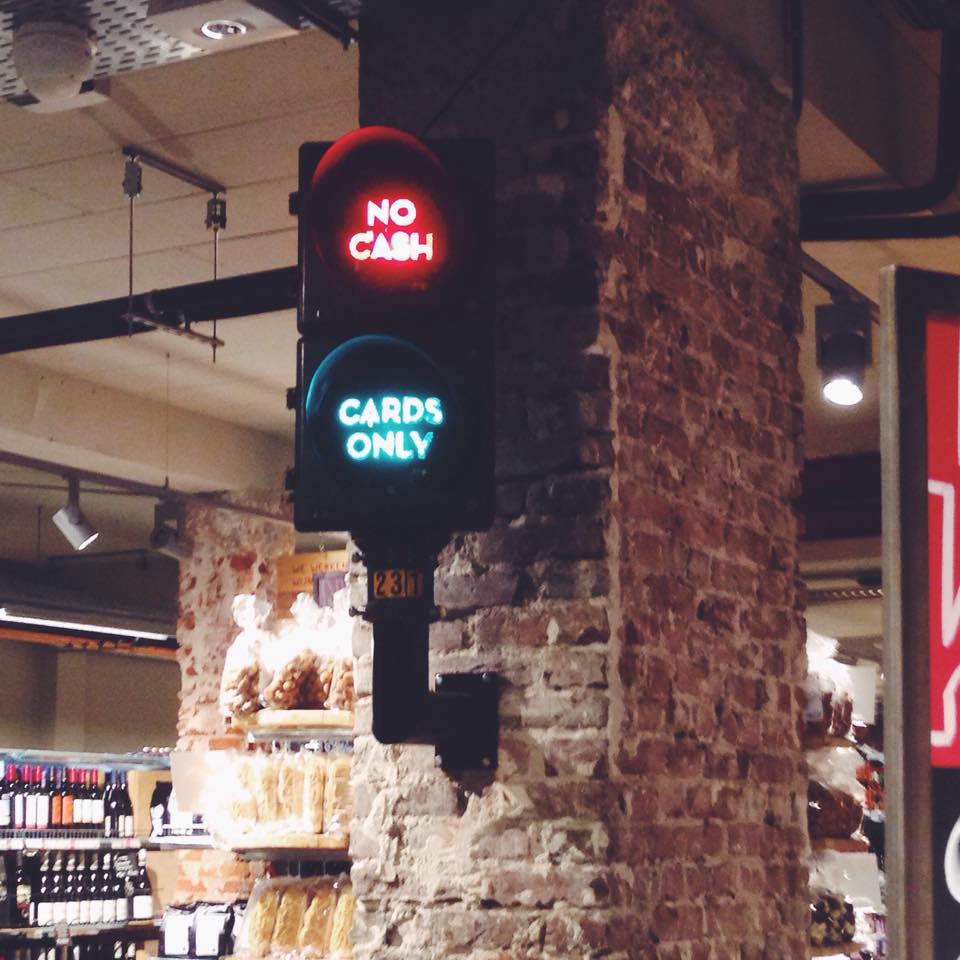 Organic supermarket Marqt accepts payments only via card, no cash. (picture by author)

A more overarching barrier is the supermarkets pricing. Alongside the plethora of Albert Heijns (a high end supermarket) and the lack of budget supermarkets makes Amsterdam’s centre harder to live in for the low-wage workers.

Unlike the inconsequential ladders, organic supermarkets are leading to a widening division in labour and ostracising part of the community. Moreover they are aiding in the transformation of Amsterdam towards becoming a cognitive cultural city. Posing the question who is the city for and to do what? It appears as if Amsterdam is becoming a space for cognitive cultural workers, whilst operated by the direct and indirect work of the service-orientated underclass. In a broader context it raises the question: in this new phase of capitalism, who gains access to good quality food and a clear ethical conscious, is it only the upper tier of the labour market?

Katie is a graduate of Msc Urban Studies from the Universiteit van Amsterdam concernced by socio-spatial injustices and the struggles over urban space.
https://nl.linkedin.com/in/katie-brown-bb5920107 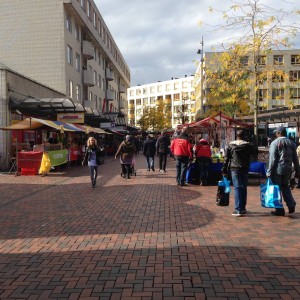 There are hundreds of local currencies - on the scale of cities or even neighbourhoods - but not many are as unique as Bijlmer...
© 2012 - 2019 The Protocity.com. All rights reserved.
Back to top