“Those who haven’t left the city by now, will be lost forever.”

That’s what we heard about Detroit before our trip. But we wanted to see this with our own eyes.  On a bike, of course – we’re always on our bikes. So… why not set out on a cycling tour to explore this fascinating metropole known as the Motor City?

Detroit is a city of patches. Poor patches, rich patches, empty patches packed with lush green grass, full patches filled with abandoned industrial buildings. And all these patches are laid out on an infinite grid of streets – of which the most infamous lies 8 miles outside the city center.

Detroit has several neighborhoods that are categorized amongst the most dangerous in the United States. We were warned: stay ‘inside the boulevard’: within the boundaries of the relatively safe areas of Corktown, Midtown and Downtown. Behind them lies Gangland, divided in the exact same square patches we see everywhere else. These gangland patches are best left alone. Empty streets riddled with burnt-out houses, and the potholes in the tarmac are so deep they threaten to gulp up our front wheels. The grass, however, has been carefully mowed, like everywhere in the US. Mowing lawns must be the most common job position ever, certainly in Detroit. Even in the most depressing and hostile blocks, the lawns look as neat and crisp as a golf course.

Yesterday, when we – a group of six Amsterdam-based friends – arrived, Detroit was still fast asleep. This city doesn’t need to set an alarm clock. Yesterday nor today. There’s no boss to go to in the morning, no traffic jams to get stuck in. Here, nobody is in a hurry. The boulevards are broad, dead straight and dead quiet. Traffic is remarkably calm. We jump to an easy but justified conclusion: this is a great city for cycling 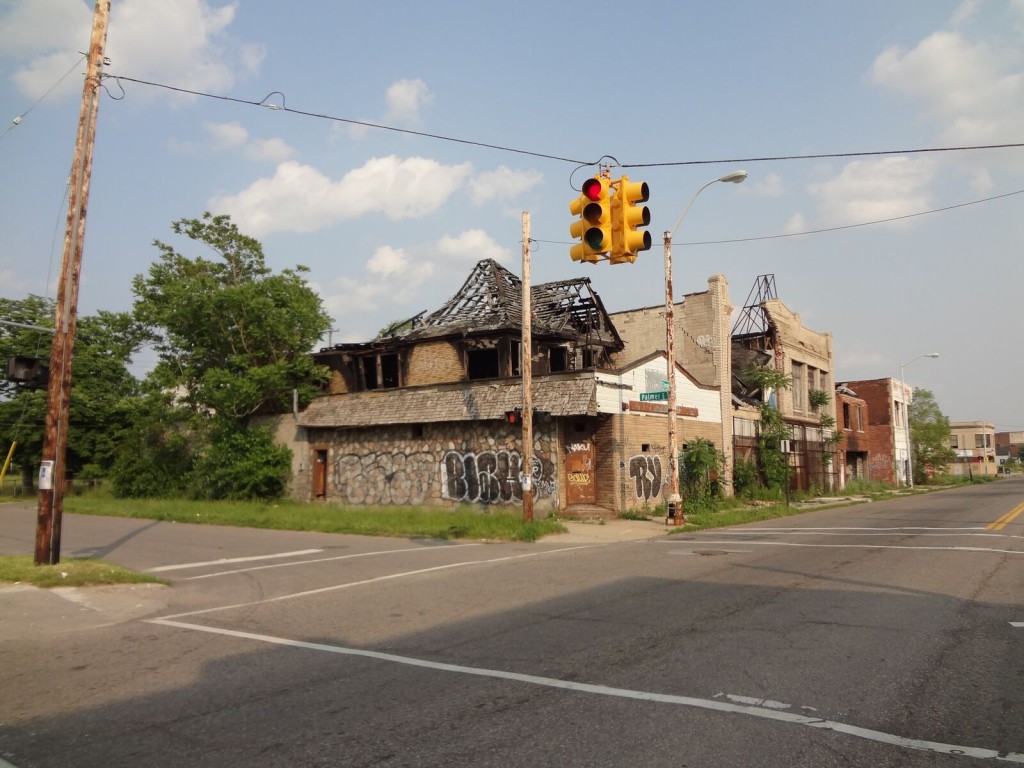 Cycling through an enormous overgrown garden

We rent our bikes at Wheelhouse Rentals, situated on the banks of the Detroit River, and cycle past the skyscraper of General Motors – an imposing shiny giant towering over the shimmering water. It’s a beautiful day, and as we ride along the river on our beachcruisers, we are met with many a happy smile. It must be a cheerful sight, six frivolous bikes, rolling along on the unpaved road under the Ambassador Bridge, inbetween abandoned industrial buildings and closed down hotels, and along the graffiti walls at Michigan Central Station. This station was once the biggest train station in the world. Now, it’s the symbol of a city in decay, where everything has come to a halt. The rails are a rusty redbrown, as everything else is in the Rustbelt. The last train left in 1988.

Many streets are sided with little signs with a bike symbol on them, indicating cycling routes. Larger investments aren’t needed to give way to cyclists. We pass through Midtown, Corktown and Downtown and see new building complexes arise on numerous occasions. Terraced houses, family houses and residential towers up to ten floors or more. Detached houses seem to remind people of a longed-to-be-forgotten past. In the first urban shell around the downtown areas the countless vacant lots are put to use as best as their optimistic inhabitants can, with small gardens, picnic spots and playgrounds. Detroit is like an enormous, overgrown garden where certain courageous (or naïve? does it matter? we applaud them!) people have picked up their secateurs and randomly started pruning. On several occasions we see some freshly planted flowers and herbs. 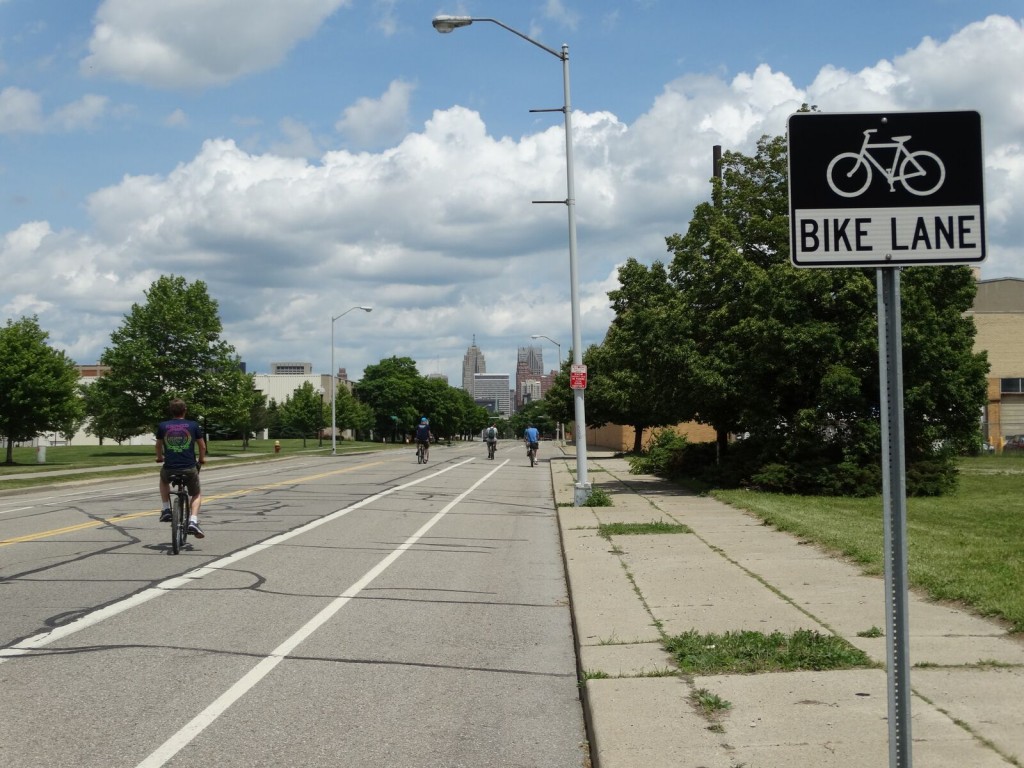 And we see cyclists. Many cyclists. It may seem remarkable, considering that Detroit, unlike many other major cities in the US, doesn’t have a bike-sharing system – the city council simply does not have the means to organize a smoothly running system with endless rows of sponsored, spotless ready-to-go bicycles complete with neat little baskets dangling from the handlebars. Yet Detroiters do cycle, they cycle a lot, and they do it with determination and, most of all, for sheer fun. We see speedy cyclists whizz by on old Schwinn race frames, we see relaxed riders on beach cruisers roaming the streets, together with countless rusty old mountain bikes.

We also see how many cyclists follow the example of the pimped pickups that enter the night, their rims spinning fanatically decorated with LED lights. Stretched cruisers hum through the city center like Christmas trees on wheels. On summer evenings, these bike-obsessed people get together in Harmony Park. Dozens of bicycle tribes, like the Hood2Hood Riderz , the Bike Life Crew and the GMOB (Grown Men On Bikes), meet each other in leather jackets studded with emblems and signs, cruising on their pimped bikes with boomboxes that pump out a non-stop symphony of elektrobeats. Detroit’s cyclist culture seems to stem directly from a colourful hiphop video.

As motorized traffic disappeared, Detroit has unintentionally become a mecca for cyclists. And its cycling inhabitants know this all too well; the multiple automobile lanes are now theirs for the taking. If this city ever flourishes again, and hopefully it will, its streets will undoubtedly be congested with numerous growling SUV’s produced by its own General Motors. The bicycle, however, will not disappear – Detroit’s cycling culture is already too deeply rooted in the heart of the Motor City. 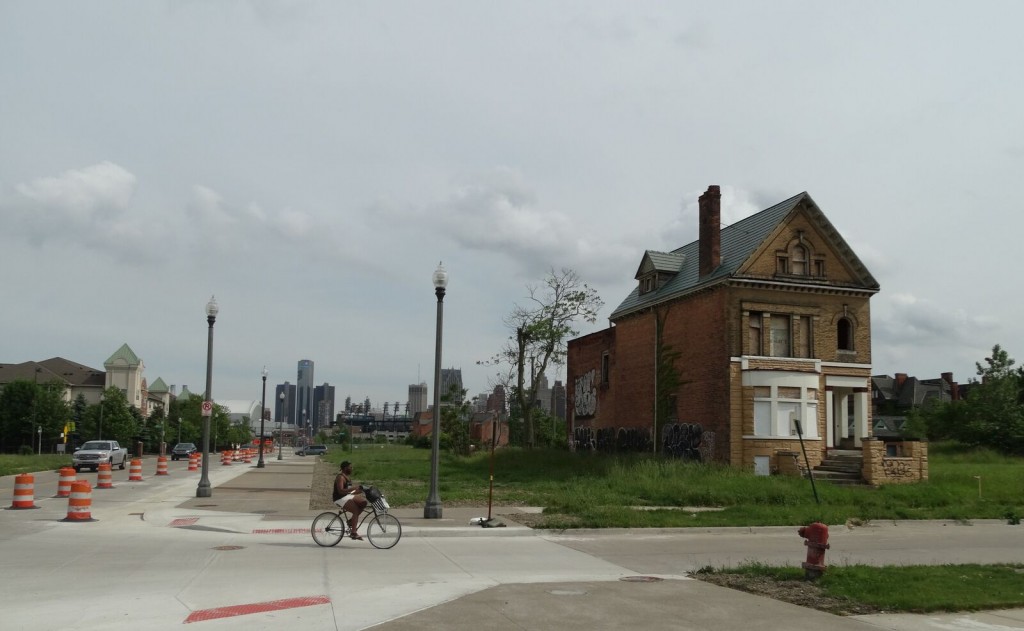 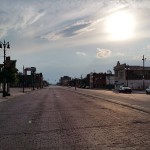 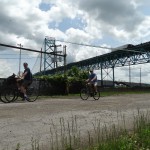 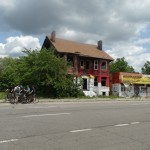 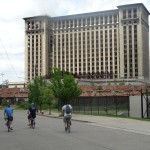 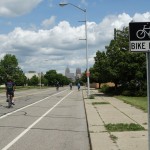 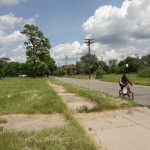 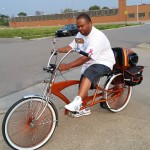 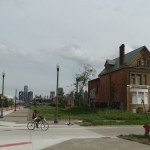 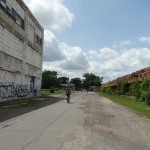 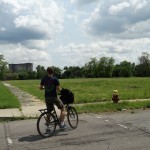 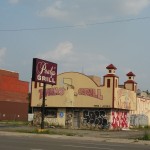 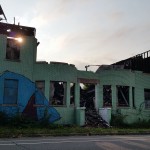 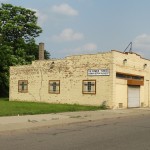 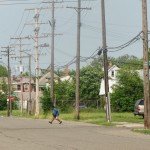 Martijn Sargentini was born and raised in Amsterdam. He studied Urban Planning at the University of Amsterdam and now manages the regional cycling investment programme at the City Region of Amsterdam. He followed a course in narrative journalism, and writes for professional cycling magazines and sites (Soigneur, Hetiskoers). When abroad, he sneaks in abandoned buildings and takes pictures. Follow him on twitter @Martijn_Sarg
https://twitter.com/Martijn_Sarg

Terrific post, thanks. Back in the 80s one of my brothers lived in St. Louis. We’d visit often and take “St. Louis Decay” bike tours, visiting the most bombed out areas of the city. It was alternately thrilling and depressing but mostly just depressing. 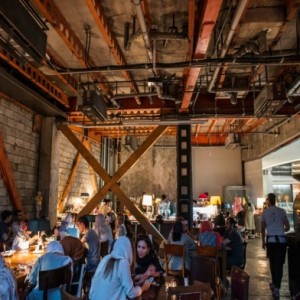 On February, I wrote a blog on tea and coffee consumption in Tehran and tried to briefly show how Iran's capital has been...
© 2012 - 2019 The Protocity.com. All rights reserved.
Back to top