There is something to be said of the journey between Darwin in Australia’s tropical North over to Dili, Timor Leste. The flight on Airnorth, a small Australian airline serving the remote north of the Australian continent and several destinations in Southeast Asia reminds me that flying is still for the privileged in many parts of the world. The flight was only a third full and the journey from the top end of Australia, the ‘lucky country’, to one of the world’s newest countries feels like your jumping to another world. 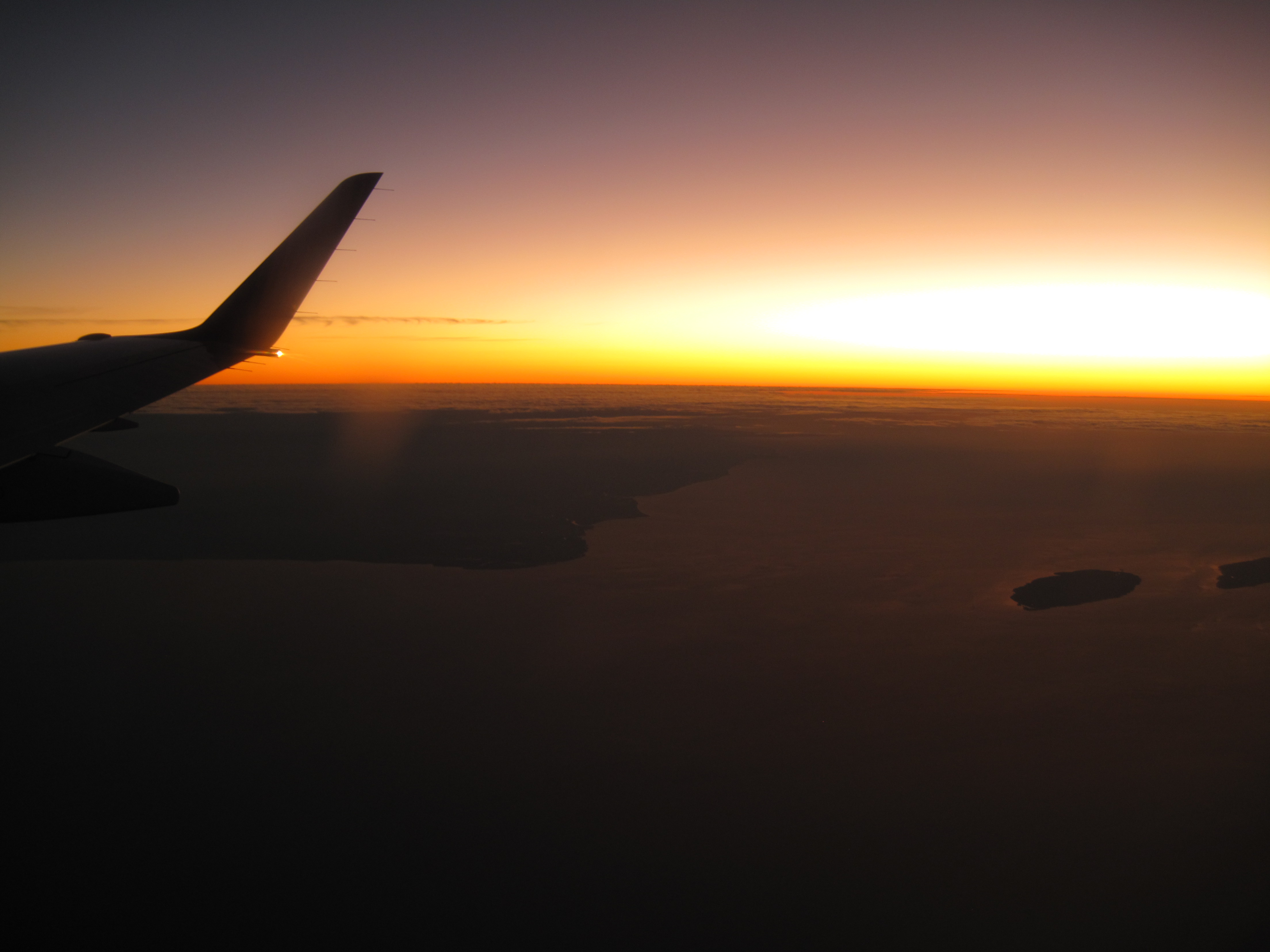 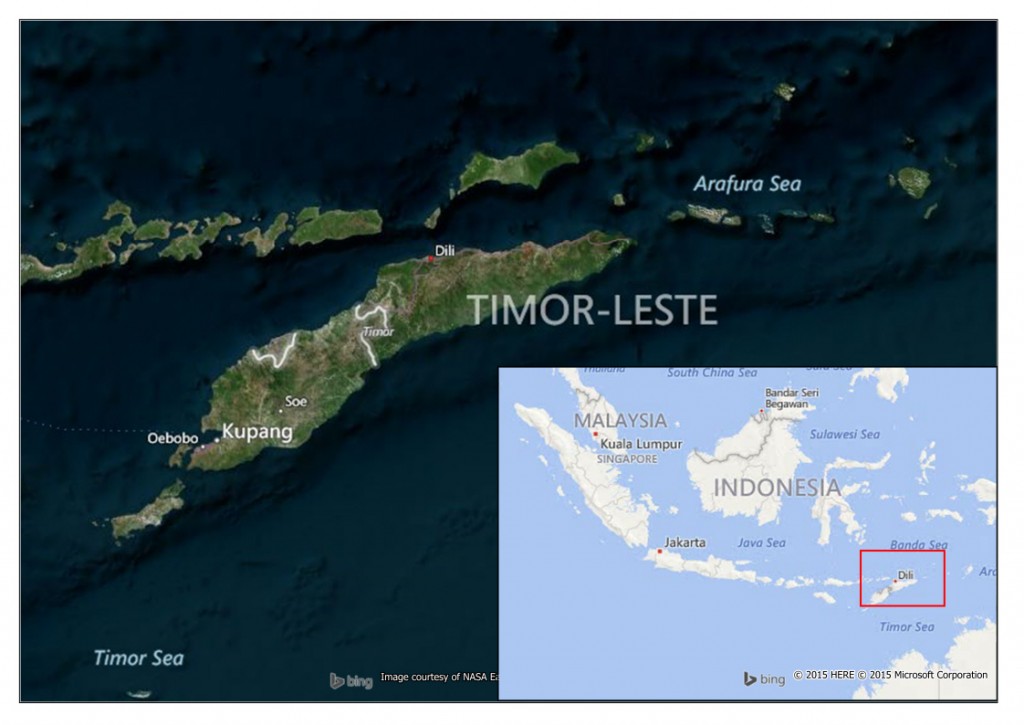 Touching down on the Dili airport’s runway I looked out to see several families out the plane window looking though the barbed wire of the airport. It reminded me in a small way of housing developments around airports I’d travelled through in India years ago. I had no expectations of what the capital city of one of the world’s least visited countries would be like. My friend Liz and I were in the country for just over a week. I did know that Dili is one of the fastest growing cities in Asia. Aside from that my thoughts pondered on how the city presents itself, what ‘experiences’ were to be had. The city had a devastating history from centuries of Portuguese colonial occupation to civic wars and occupation by neighbouring Indonesia.

The result is that it’s hard to describe to people in some ways what the city of Dili was like. It is for sure that economic, political and geographic challenges prevail to what the western outlook of development and ‘getting the city back on its feet’ state as a means of city progress. However there are a number of things one can observe which certainty demonstrate opportunities and challenges for the future of the city.

The Timorese capital, Dili is relatively compact and flat around the harbour and city centre. This is contrasted with rugged mountains which rise amongst the outskirts of the centre and dominate the country. 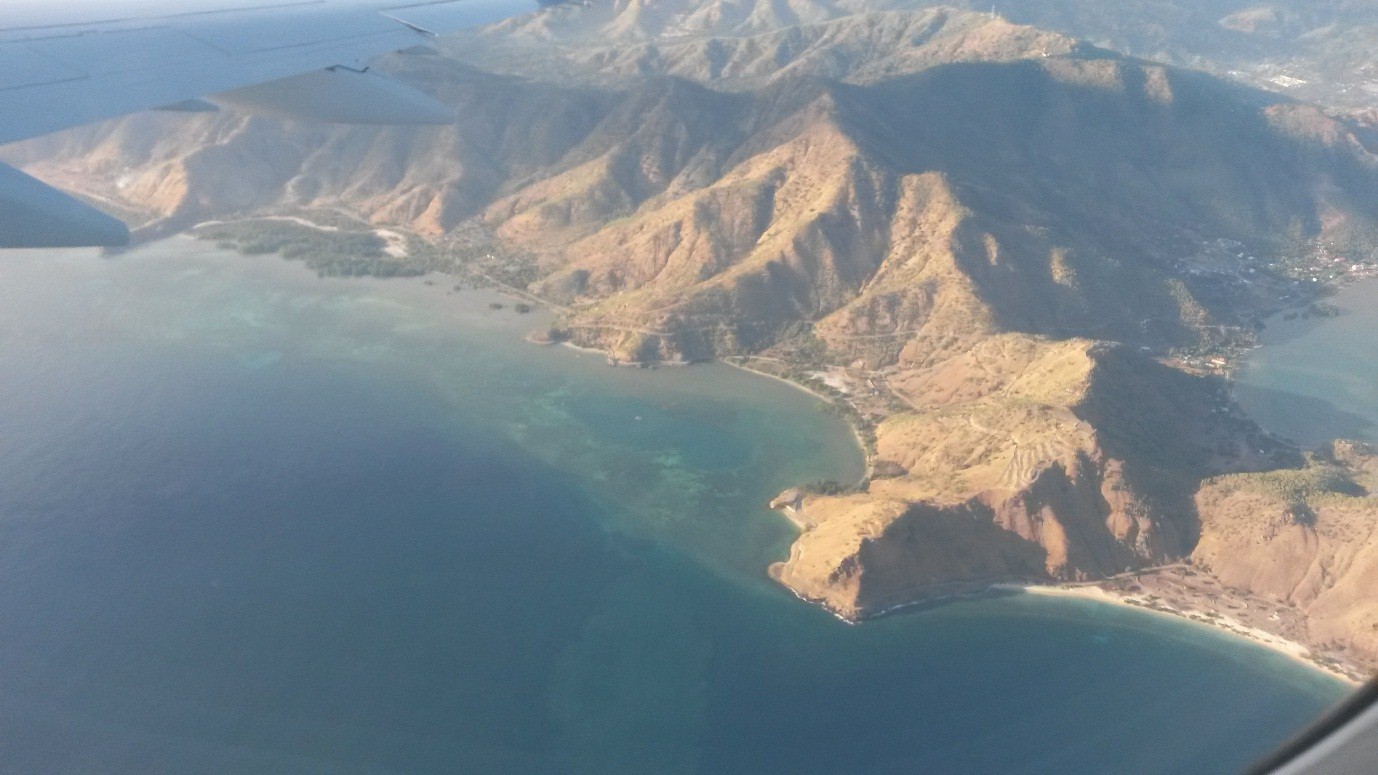 Strolling the streets of the city, it is easy to realise that East Timor has one of the youngest populations in the world. The median age of persons in East Timor in a 2014 study was estimated at 18.1 years. The study estimated that close to one in five people in Timor Leste are aged under 24 years. 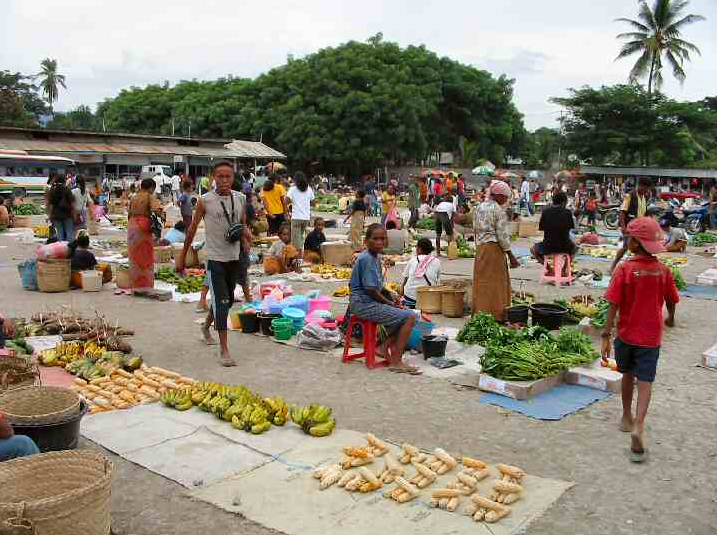 Local market in Dili. Timor Leste’s economy is heavily based on agriculture although natural resources especially oil are also significant. GDP has increased significantly but the gains are out of reach to most Timorese (Photo: fpet.org.au)

As two foreigners in one of the world’s least visited nations, we definitely stuck out for option to walk around the relatively compact city centre. Only some streets had proper footpaths and in many places the streets were very dusty. In the afternoon heat at least one can take a local taxi to the nice beaches just outside the centre! 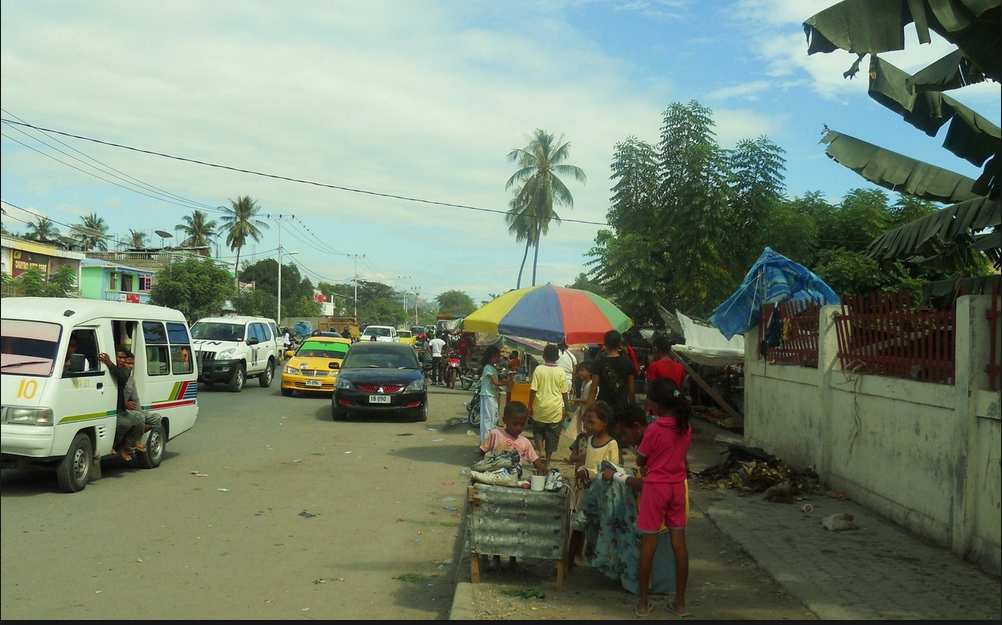 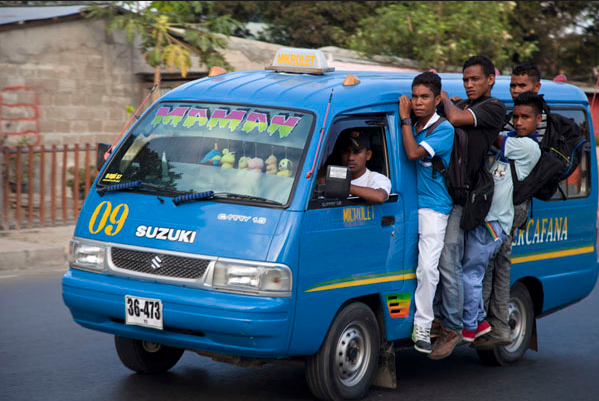 Local ‘mikrolet’ transportation costs around $US0.25 per ride. It is the main source of transport for many locals (Photo: traveladventures.org)

The harbour is crucial to the functioning of Dili and the port provides access to the rest of Asia. It was interesting to look at the ship arrival and departure timetable for cargo. Local sea transport is infrequent but particularly important. A donated old German ferry vessel, the ‘Berlin Nakroma’, sails a return trip once a week to the nearby island of Atauro. Departing early morning every Saturday taking this ship gives a picture of the remoteness of some parts of the country. At times it takes several hours to load all the passengers and cargo onto the ship and complete the short journey. 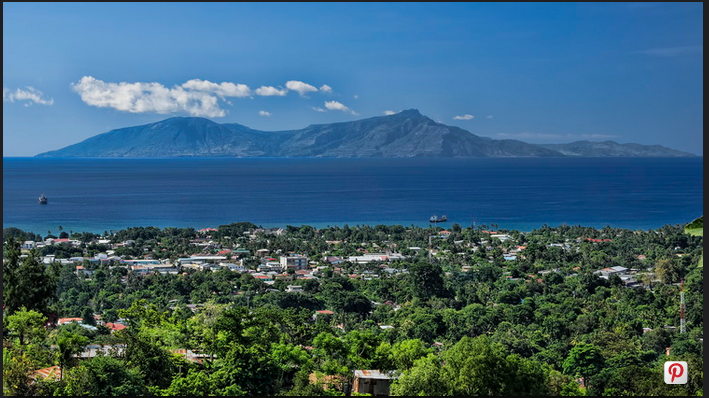 The view over Dili to Atauro Island, 30km in the distance. The Berlin – Nakroma ferry takes several hours to travel the route once a week (Courtesy: indo pacific images) 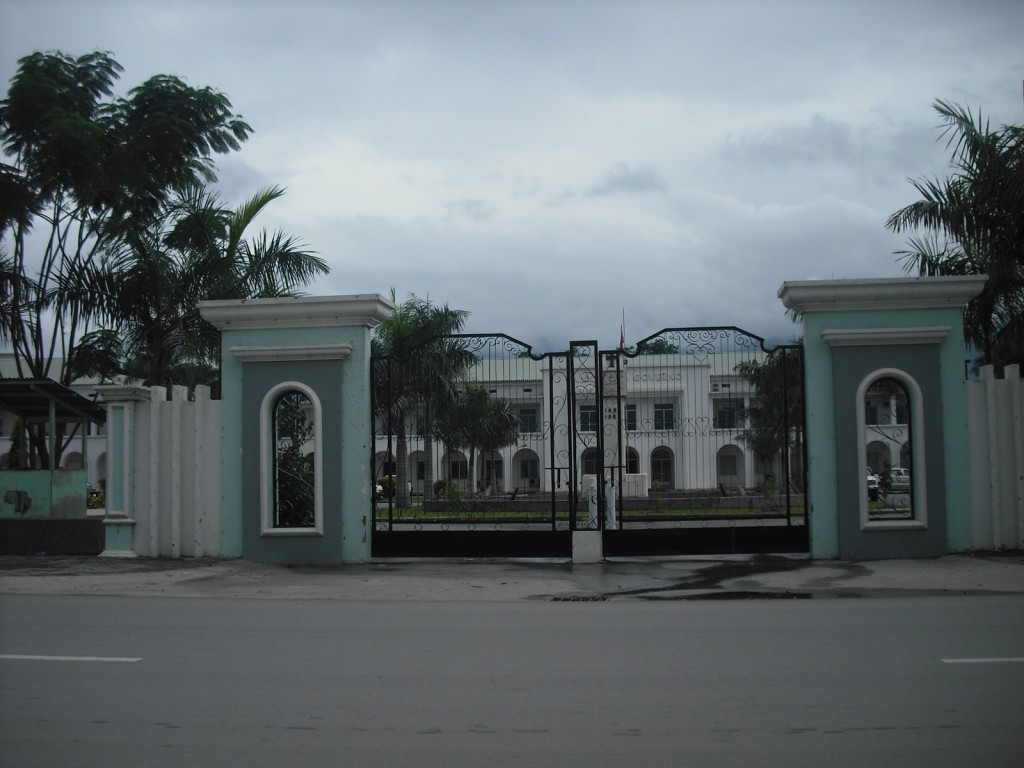 Portuguese style government buildings dominate the city centre. Large 4wd vehicles are seen all over the city and on treacherous roads around the country. It was easy to question why few locals lived in some of these central areas. As these streets were witness to decades of devastation, people have not wanted or been unable to inhabit some parts of the city (Source: onovoselvagem.blogspot.com) 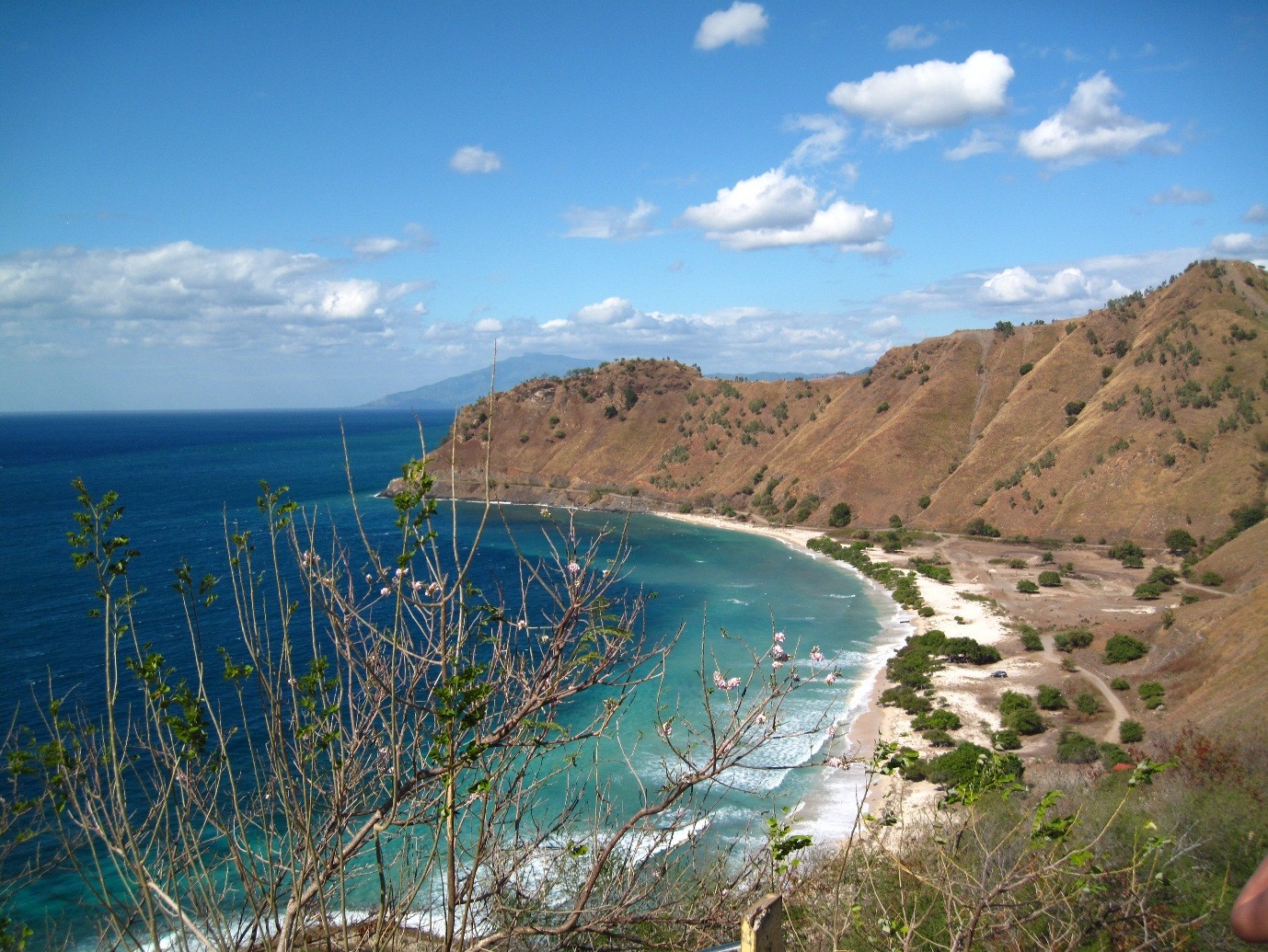 Density and displacement in Dili

A Brookings Institution publication details extensively the nature displacement as a result of conflict which has shaped the city and surrounds.

Dili is by far the largest urban centre in Timor – Leste followed by Baucau to the east. During the Indonesian occupation and war that followed, it is estimated that 70 percent of the country’s infrastructure was destroyed. Such mass violence and destruction which emerged left an estimated 450,000 internally displaced. Following the ending of the second Indonesian occupation in 1999, over the next 3 years most internally displaced persons (IDP’s) did not return to their places of origin. Timor Leste is still in a large part of predominately rural society, and a large number of displaced people chose to settle in the capital, Dili. Up until recently it has become one of the fastest growing cities in Asia. A lack of property rights in this case can exacerbate tensions and this is evident across the city. Walking in many sections of the city revealed this sense of unsettlement and informal housing which existed for decades.

High security vehicles from the UN and other government organisations cross the streets of the centre / business district. Although times have changed it is still evident that these organisations have a strong presence here. A concentration of expatriates and government officials on generous living allowances has created a bubble economy separate from the local Timorese population.

Looking towards the future

Dili is starting to look towards the future and the rest of the world is sighting a presence here. Urban amenities are lacking but natural beauty and a colonial backdrop make many parts of the city enjoyable. Progress in this country is complex as there are many factors at play. One can hope young Timorese and those returning from overseas with new ideas can shape the city further. 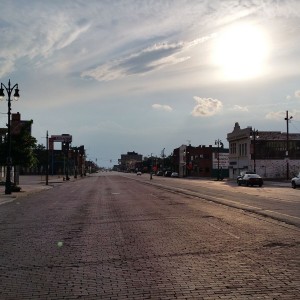 “Those who haven’t left the city by now, will be lost forever.” That’s what we heard about Detroit before our trip....
© 2012 - 2019 The Protocity.com. All rights reserved.
Back to top