Experiences from the New Mariahilferstrasse

Global movements and initiatives towards (more) equal and sustainable mobility patterns, as well as uses and distributions of urban space  are constantly growing and  actions to reclaim ‘our’ streets, buildings and cities seem to be more prevalent than ever. Also, sustainable  urban planning paradigms (looking beyond mere environmental impacts) increasingly point towards criticisms of current and long-established traffic and user hierarchies. There are several ways to deal with and break barriers and power struggles among the users (pedestrians, cyclists, car drivers) of urban space.

A relatively new concept and increasingly praised idea termed ‘shared space’ aims to reduce such barriers, especially among pedestrians and car drivers. The principal ideas are a shared and equal use of space, and a redistribution of priorities to the non-motorized users. Don’t we all want more equitable rights to use urban (public) space!? Can we then applaud shared spaces as a ‘key to the future of urban centres‘ or is it just a nicely sounding ‘delusion of shared space as an urban transport panacea‘?

A newly installed shared space zone in Vienna, ‘Die Neue Mariahilferstrasse’, on the largest shopping street (‘Mariahilferstrasse’, 1,8km) in Austria, appeals to the emotions of Viennese residents, politicians, public figures, and beyond – and not only the happy kind. 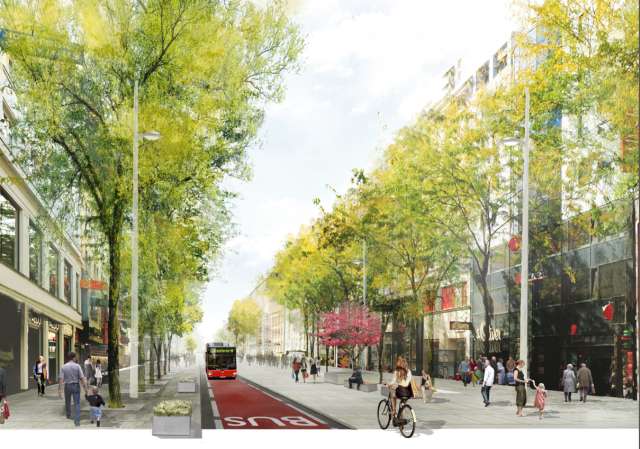 The original design of the ‘New Mariahilferstrasse’

So, not surprising that within the first couple of weeks of being in Vienna, I have been swamped with opinions, criticism, approving and many disapproving voices – wherever I go and whomever I meet – all referring to one project: the ‘Neue Mariahilferstrasse’ – it seems to be on everyone’s lips! Time to take a close and critical look, and share this shared space personally, as a cyclist and as a pedestrian, I thought. Coincidently, or (maybe) not such a coincidence, the ‘Neue Mariahilferstrasse’ project is happening right amidst national elections (27.09.2013) – and has been inflaming discussions in political, public, and private arenas – the project was even referred to as the new ‘Wahlkampfzone’ (‘election campaign zone’).

The Mariahilferstrasse used to be a two-lane main traffic route, leading to a main train station, and the outer city ring in the North, and to the inner city area in the South.  Before the project was installed, the street could be characterized by lots of car traffic and heavy pedestrian use (often crossing the street randomly), plus cyclist trying to make their way through the madness alive.

Since the completion of the subway in the early 1990s, the attraction of the shopping street was growing steadily, and a new concept for this street has been discussed for many years. Plans have been pushed forward since the green party joined the municipal political arena, and has become the coalition party for the social-democrats. Since 16.08.2013, there have been month-long efforts to involve the adjacent districts, and to encourage local residents and businesses to voice their opinions and visions for a ‘New Mariahilferstrasse’ (‘Neue Mariahilferstrase’). Ideas around citizen participation and the realization for this project have been heavily discussed – Did it make sense to involve local residents? Who was participating in the process, who wasn’t, and why!? The original vision and plan looks promising, but is (unfortunately) far from reality today. The current plan consists of three areas: two shared space zones and one pedestrian (and cyclist) area, however with a buslane going right through it which caused frustrated reactions by busdrivers, who went on strike, and are now demanding a new route. 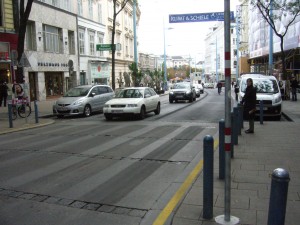 The a little halting German term ‘Begegnungszone’ (‘Meeting Zone’) raises the question of who is ‘meeting’ whom and where? Walking up and down the street one slow morning, and a busy afternoon I came to realize that the majority of pedestrians (including me) walks on the old sidewalks, and (still) crosses the street on formerly marked pedestrians crossing as they are still visible.  Here you can visually cycle down the street through they eyes of a cyclist! Cyclist are allowed a speed limit of 20km/h and are supposed to cycle in ‘pedestrian tempo’ – which from own experience proves to be easier said than done –  especially cycling downhill while feeling the joy of having enough space for once, and not many people or vehicles in the way.

In general, I didn’t experience much sharing in the shared space zones, but observed trends to rather stick to old traffic distribution. Since not much of the old design has been changed (except some more benches on the sidewalks), questions arise about urban design and its effect on people’s behaviours. Many people I have spoken to, believe that changes in the project could also be fruitful once the former sidewalks are lowered to street level, and the old pedestrians crossings are not poorly but properly eradicated as applicable in the left photo. During my walk and cycle down the street, one woman braves the frequent traffic and walks in the middle of the street seemingly aware that a car might hunk her out of the way any second – What is the point I thought? Even with looking at the signs and observing other pedestrians it is unclear and confusing to me where I am supposed to walk, and more importantly where and when are or aren’t cars joining me on the street. Speaking to a visually impaired pedestrian it quickly becomes clear that it is also extremely difficult for her to navigate and cross streets  especially with cars and fast cyclists on certain parts of the streets. 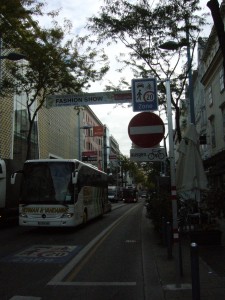 Other shared space projects in Austria on first glance seems to work well and better. Most certainly, critics can be found everywhere, and power struggles and heated discussions led loose by changing and breaking down traffic hierarchies can be exhausting – but are ever more important in moving towards more equal and sustainable urban mobility and use of urban space.

This discussion of  ‘Die Neue Mariahilferstrasse’ rather points to a story of failure than success, considering that a or the main aspect of  ‘shared space’ design is the breaking up of (old and deeply engrained) traffic hierarchies by opening up streets (formerly used as automobile and cycling arenas) to pedestrians and cyclists. 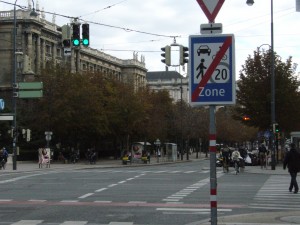 So, then is this project really ‘doomed to fail’? I do not believe it is smart to give up on the project too quickly, and to agree on its failure. This might be an easy way out, and cowardly return to current norms of automobile dominance. And yes, it is and will be taking time for people to get to know, adjust and accept not only this new concept and project, but to also alter long-lasting and to some extent deeply ingrained intelligibilities of how and where to walk, cycle, and drive.

More questions than answers derive: Where is this project going, and how will it be changed in the coming months? Why not be even more ‘brave’ and change the whole street to a pedestrian and cyclist only street where cars are allowed to cross on specific points? Or will also cyclists be banned from the street, as currently suggested by the Social Democrats? How can citizen participation be fruitful, and how does the process need to be altered? Which political leaders will exercise more power in the end, and will old traffic concepts ultimately win over more alternative ideas?

The way the project is discussed now, including my own experiences I do believe that there is great potential but it is definitely not used to its fullest, and needs some major (re-) adjustments, in terms of both physical changes, traffic concepts, and a broad discussion of general traffic norms and hierarchies needs to take place in order to move forward.

Check out some more links to newspaper articles, discussions and posts about the project:

General information and pointers about the project  (english)

Critical Reflections about missing structural measures in the project (german)

Information page about the project by the Green party (german) 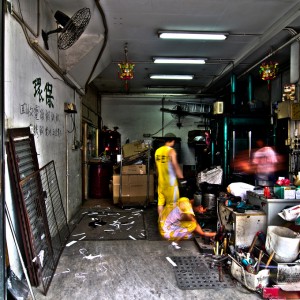 Few of Hong Kong's neighbourhoods have transformed as frequently as Kwun Tong. The former industrial district lies directly...
© 2012 - 2019 The Protocity.com. All rights reserved.
Back to top