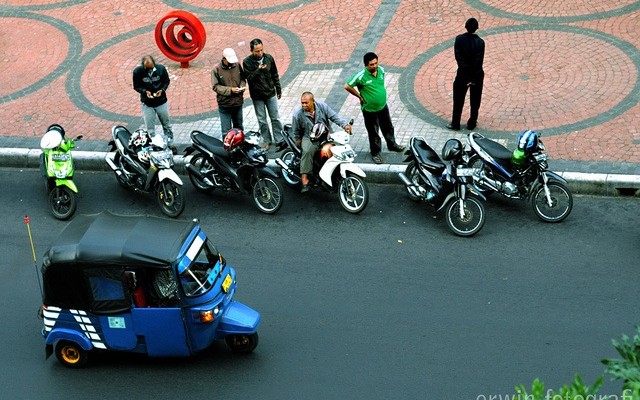 The vast majority of people in fast growing metropolitan areas in developing economies depend on informal transport services. Several studies clearly emphasize the pivotal role of this type of service in supporting urban life (cf. Cervero & Golub 2007). In Indonesia, ojek or motorbike taxi is a prominent feature of these urban informalities. This ojek service is provided by individuals, instead of being subordinated under certain groups or companies. The recent introduction of ICT, however, has also brought a new era for this system at the margin. A new system which has not just corrected the current informal urban mobility, but also has created an ‘Uber-like’ mode of business within a genuine local context.

Ojek is basically full of informalities. Neither the national nor local governments ever consider ojek as a formal activity or a subject to be regulated. They leave it informal as it is since this practice is seen partly as a solution for urban mobility problems, as well as a means for job creation. In crowded and jammed metropolitans like Jakarta, Bandung, Yogyakarta, etc., ojek has become as a basic need for citizens seeking for faster mobility. In spite of the unregulated nature, this long standing habitus has shaped an unwritten understanding between the actors, i.e. government, users and drivers, and also among the ojek drivers themselves. These ojek drivers usually settle at a certain place on a daily basis (called as pangkalan), mostly in residential areas, office areas and shopping centers. One of the ojek consumers from the Jakarta area expressed the beauty of this informal institution as he experiences it. Situated in a residential area, he describes how the interaction between him and several drivers is like a friendship and a brotherhood. Moreover, although working under an economic competition for seeking income, there are respected unwritten values among the drivers within the same and between different pangkalan. For example, every pangkalan has its own pool of potential customers whom should not be grabbed. Drivers in the same pangkalan have to queue for giving their service. This illustrates that many localized values are being internalized in the field.

Nevertheless, due to myriad drivers operating everywhere in the cities, this informal and localized institution has also caused several drawbacks, most notably in terms of safety and rate certainty. Every driver has his/her own attitude and style of driving: fast or slow, soft or hard, to obey or to violate the rule, etc. Since the ojek driver rides on a general motorbike, there is no special device such as a ‘taximeter’ equipped. As a result, negotiation for rate is another art which should be mastered. If both parties (consumer and driver) are familiar with the destination, the negotiation tends to end easier. But, if one or even both parties do not have any precise idea of the destination, the negotiation is likely to be tougher. The rate also does not seem to follow the simple economic supply-demand law of pricing. The rate of ojek service has increased over years, parallel with the growing number of ojek drivers, although the number of consumers has grown at a more modest rate.

Ojek Ride-Sharing and the Game Changer

Bringing the same platform idea as Uber, but with a different mode of transport and some other details: a start-up company named as ‘Go-Jek’ opened-up the first ride-sharing business in Indonesia around four years ago.Seeing ojek as a daily need for many citizens, this company runs its business based on the mixture between motorbike and ICT. Several other start-ups have begun to follow the same model. The hype of this new type of ride-sharing has just occurred in the past one year. Its entry to the market was quite impressive by promoting two values, i.e. safety and standardized rate, which many modern societies would like to have well-arranged. As many big cities in Indonesia are currently, in terms of population, dominated by an abundant young generation and middle class citizens, the ojek ride-sharing system has got its momentum to rise. A young mother working in Jakarta expressed her happiness with this ride-sharing, indicating that she feels more safely while using this service. Just by using the application from her smart-phone she could easily reach the potential driver around her with the standardized rate already in hand. Another pleasure which she felt is that she can give feedback to evaluate the quality of the driver. The consumers are now also covered by insurance for using this service. Overall, from the demand or consumer perspective, it seems that this new line of ojek gives more comfortability of urban mobility service. 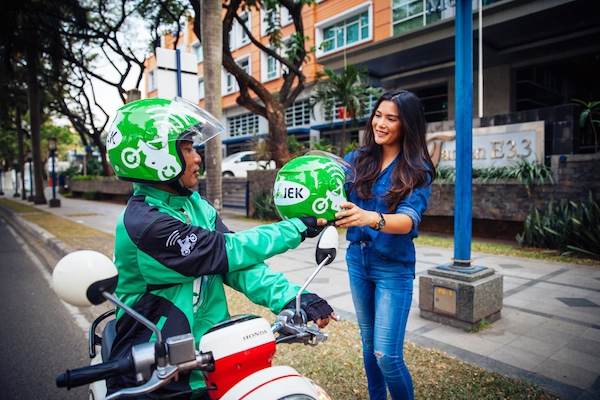 Go-Jek as the Pioneer of Ojek Ride-Sharing
Source: http://www.go-jek.com/

This emergence has changed the game of ojek operation and urban mobility in general. The ride-sharing has in particular intervened in the informality of ojek pangkalan which had thus far never been touched by the government. Moreover, these private players almost seem to act as a shadow government, since they introduced the standardized rate and service (of ojek system). From the conventional ojek driver perspective, this new business has disrupted their source of income. Several rejections from ojek pangkalan against this ride-sharing occurred in many neighborhoods. For instance, they do not allow ‘Go-Jek or other alike companies’ drivers to take consumers from their pangkalan area. Interestingly, it is again the private sector who has tried to open a negotiation forum by inviting these ojek pangkalan drivers to join in their companies as partners. There have been many reasons however why these ‘conventional’ drivers are reluctant to accepting this offer. For instance, they are not familiar with the wider area they are ought to work in and there is a general fear of using new technology. Although the new system has, on the one hand, corrected the unstandardized and sometimes chaotic values of ojek pangkalan, ojek ride-sharing has also played ‘unfairly’ by continuing to impose subsidized rate for the users. This promotion rate has been applied for an uncertain period of time, and it makes the apple to apple competition with ojek pangkalan, in terms of rate, seem unfair. For longer distance the rate of ojek ride-sharing is comparatively cheaper than ojek pangkalan. Perhaps it is the right time for the government to wake-up and to mediate these conflicts. By giving the appreciation to the service quality provided by these ojek ride-sharing, the government should also take some measures to tackle the continuing competition among ojek ride-sharing companies and also between these companies and the existing ojek pangkalan.

Source picture on top of the article: Erwin Abdulrahman (Flickr)

I was born in Indonesia and work for the Indonesian Institute of Sciences (LIPI), Jakarta. Currently I am enrolled as a PhD student at the Department of Geography, Ghent University. I am particularly interested in socio-economic and innovation aspects of urban and regional geography. For further discussion, please do not hesitate to contact me via galuh.indraprahasta@gmail.com 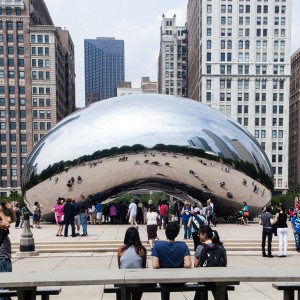 Parks brings out the best in cities, and Chicago is no exception. Millennium Park, which was opened to the public ten years...
© 2012 - 2019 The Protocity.com. All rights reserved.
Back to top