Parks brings out the best in cities, and Chicago is no exception. Millennium Park, which was opened to the public ten years ago, certainly is an attraction. Where once a chaotic cluster of Illinois Central rail tracks and yards marked the end of the city centre, this oasis of green public space now pushes the city limits further out. The park is like a colourful flower bouquet, and its sweet perfume has an irresistible appeal on the buzzing crowds. We decided to go for a nightly walk in the park, and soon imagined ourselves in the middle of a Walt Disney musical.

It’s a short walk from the monumental, wooden platforms of the Chicago Loop to the park at the banks of Lake Michigan. The stream of pedestrians gently pushes us alongside the fully lighted skyscrapers, echoing scenes from a Michael Mann movie, into the area where everybody seems to come together. We see how the famous mercury drop, a work of art called Cloud Gate by artist Anish Kapoor, reflects a colorful bunch of photographers and their subjects: two items that increasingly tend to blend into one and the same these days, shooting their pics from the perspective of a telescopic stick. But let’s not deviate on that. 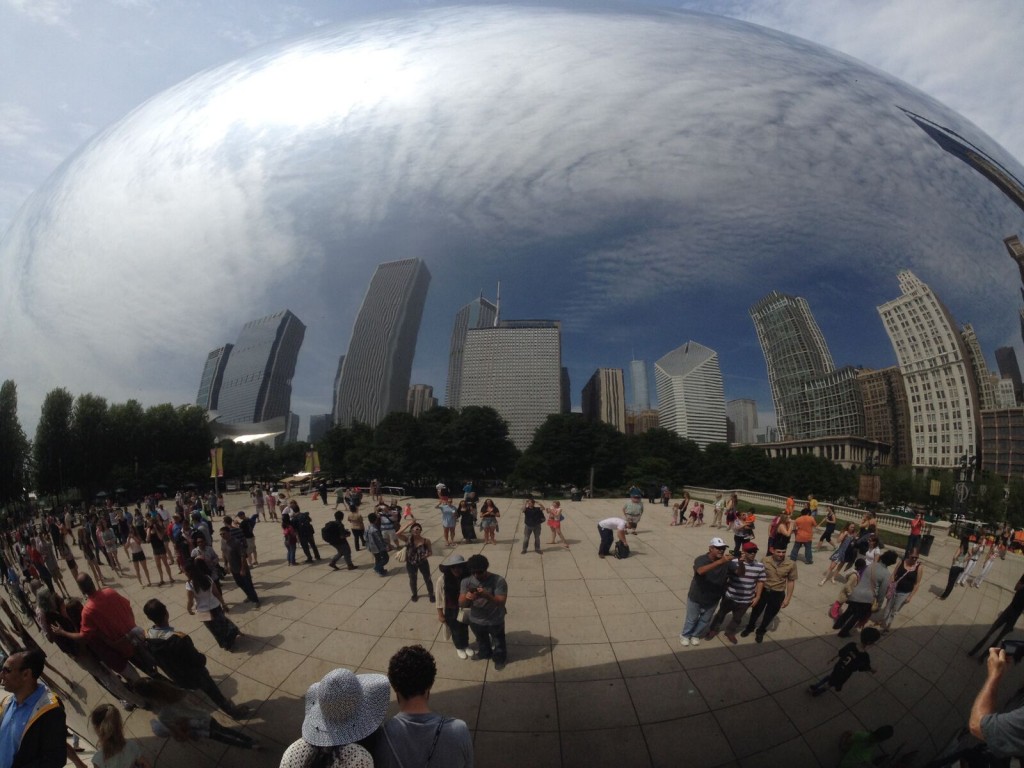 Locals, tourists and families from all corners of the world come to his place to enjoy a relaxing walk in the park. Visitors have always shown great interest in portraying themselves with the skyline of Chicago, and Cloud Gate is a brilliant solution to meet this need. It’s a perfect eye-catcher, comparable to the gigantic I Amsterdam letters that circulate through our hometown of Amsterdam. Cloud Gate is a three-dimensional, chromed carnival mirror. Here, everybody can experience his or her own feel-good moment shot from a selfie-stick.

The ambitious green project is part of the Grant Park and was opened in 2004. As the name implies, the original plan for it was to joyfully guide the city into the new millennium. Money problems caused quite a delay in construction – the park turned out much more expensive that was originally foreseen, stretching the budget from $150 million to almost half a billion. 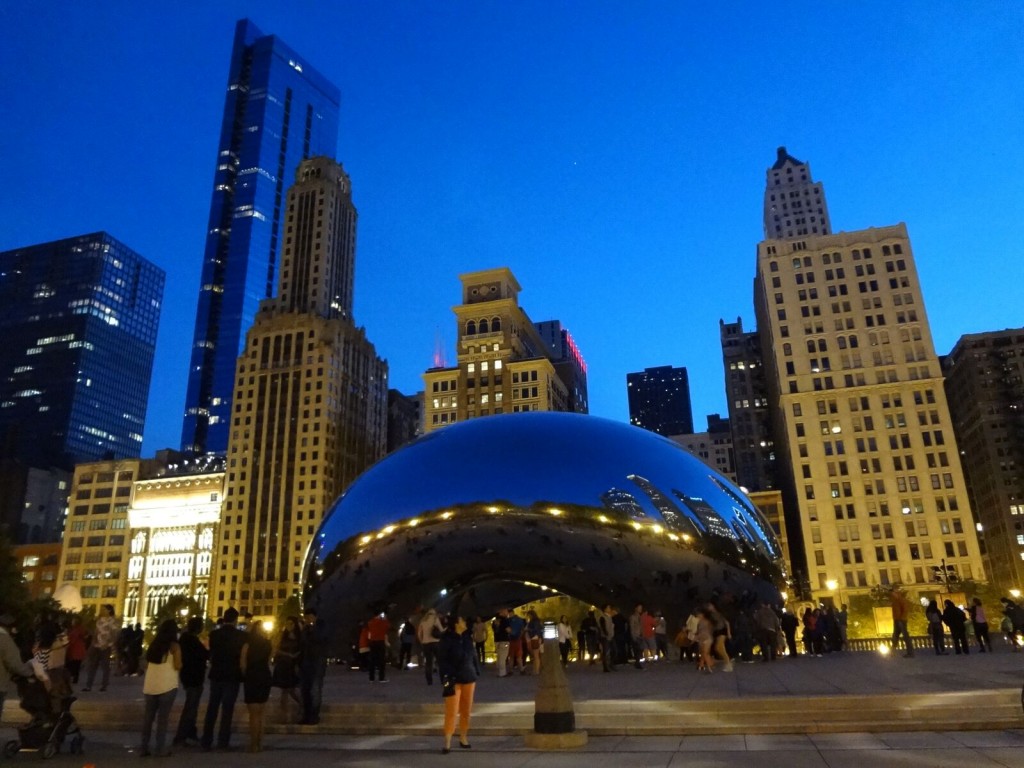 In itself, the park is no more than a stretch of green on top of a gigantic parking garage and the underground Millennium Station. If you look at the actual maps of the park, you’ll soon find out who paid up the necessary funds for the construction: tax payers and local businesses – and not necessarily small ones. In fact, large Chicago-based companies such as airplane builder Boeing and chewing gum producer Wrigley covered much of the enormous extra costs and consequently gave their name to several of the park’s pavilions and promenades.

Money down the toilet?

Since the opening, each year up to five million people visit Millennium Park. The project has won an array of prizes and is famed for its accessibility and praiseworthy aesthetics. Real estate prices around the park soon skyrocketed. Around the park, the Chicago streets breathe a similar grandeur of the park boulevards in Paris. But does the average Chicagoan profit from the prestige urge that the city council, led by ex-mayor Richard M. Daley and his club of CEOs, manifests here?

There’s no better way to find out than to have a proper look ourselves. 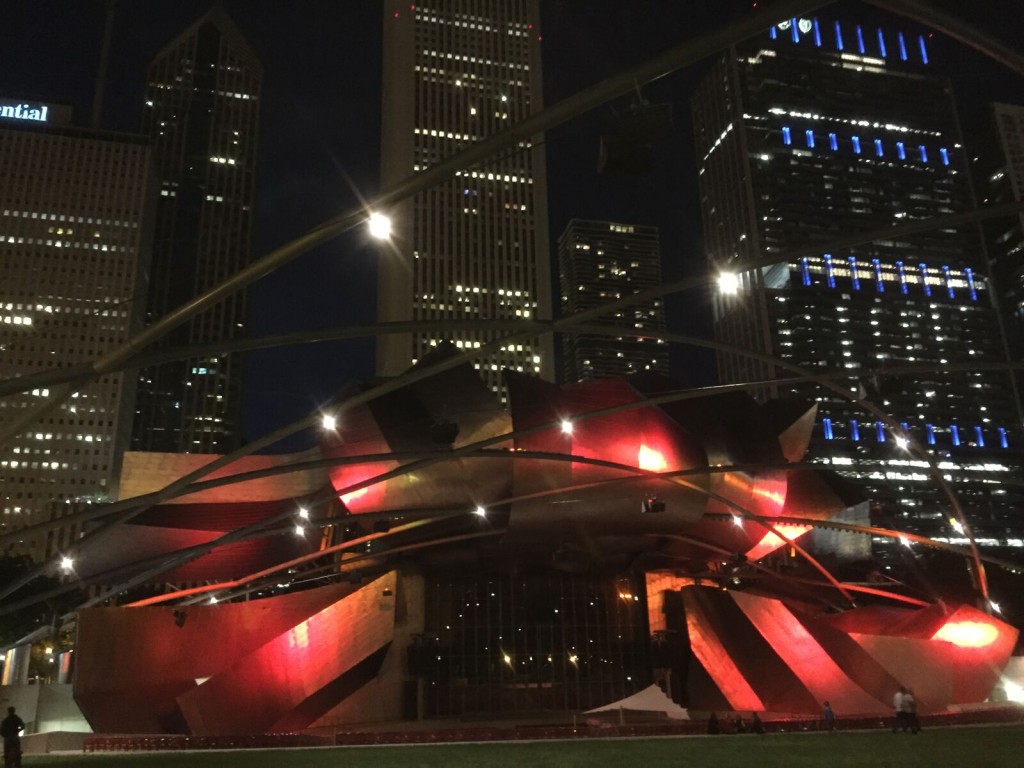 From Cloud Gate, we continue our way towards the Jay Pritzker Pavilion by architect Frank Gehry, known foremost for his famous Guggenheim Museum in Bilbao. Originally, the budget for this structure was $10 million: final costs reached no less than $60 million. Gehry repeatedly kicked his ambitions up a notch, and it shows: we admire its sublime forms, fabulously lighted with ever changing colours. This is now the venue for the annual Chicago Blues Festival – the largest free blues festival in the world. But even without any music or live event it’s worthwhile to come and admire this stage.

Further on in Millennium Park, there’s an actual open air concert taking place. Forlorn fragments of music float down upon the grass and paths. This is Chicago celebrating a Saturday night in summer; on the side of the road, entire families are relaxing next to their car, the boot filled with food and drink. A swirling boardwalk (BP Bridge) leads us over a four-lane road and into a public playground where dozens of children are playing, even though it’s 9.30 pm, and there’s even a supervisor doing surveillance. Graffiti and vandalism seem non-existent here. On not one single occasion do we see any permanent park residents – no drug dealers, bored teenagers, homeless people or alcoholics: the only people we see walking around with cans of lager are us. Happily sipping on our giant cans of Budweiser, and unbothered by law enforcers, we continue our way into Grant Park.

The only people we see walking around with cans of lager are us (Photo: Anne Bijlmer)

There, a bit further on, the Buckingham Fountain attracts visitors like a colourful flower garden lures in a big swarm of bees. This fountain is a classic icon, that we recognise from the opening credits of the well-known sitcom Married… with Children, starring a world famous Chicagoan; shoe salesman Al Bundy.

This is a fairytale park with the clinical perfection of Disneyworld. No street vendors with fake Gucci bags, no sunglasses on a rug, just pure and clean entertainment. 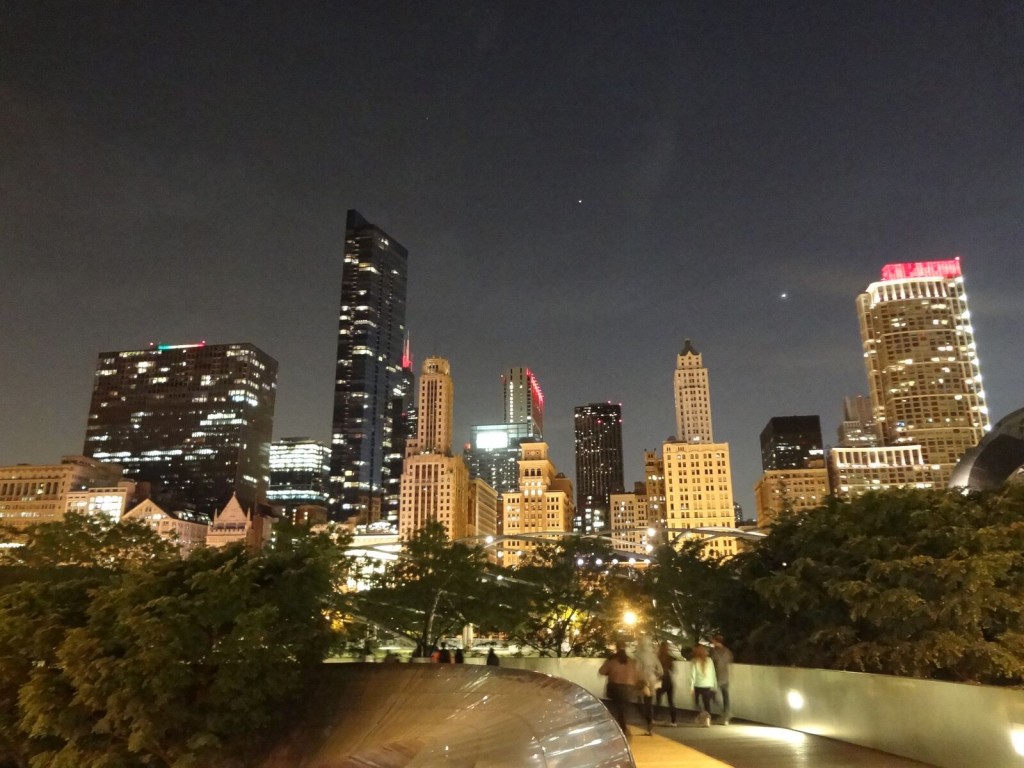 A swirling boardwalk to the banks of Lake Michigan (Photo: Martijn Sargentini)

The moving colours in the fountain are synchronised with famous musical evergreens that reverberate from speakers all around us. Music and light effects build up to a climax, while visitors gather in an area next to the fountain, overlooking the nightly waters of Lake Michigan. Then, suddenly, the music stops. It’s time for the big finale in this three-dimensional musical on the banks of the lake. At 10.15pm sharp, fireworks start above the shimmering water. Boats blow their horns, as Chicago residents and their kids stand side by side on the edge of the park: young, old, poor, rich – everybody is enjoying this smoothly orchestrated spectacle. Now, we do hear the popping sounds of bottles being opened, paired to the euphoric screams and the loud laughs of little children running around.

It only lasts for a short while. At 10.30pm, the party’s over. The city council has decided it’s bedtime. Everybody leaves the park. And so do we. 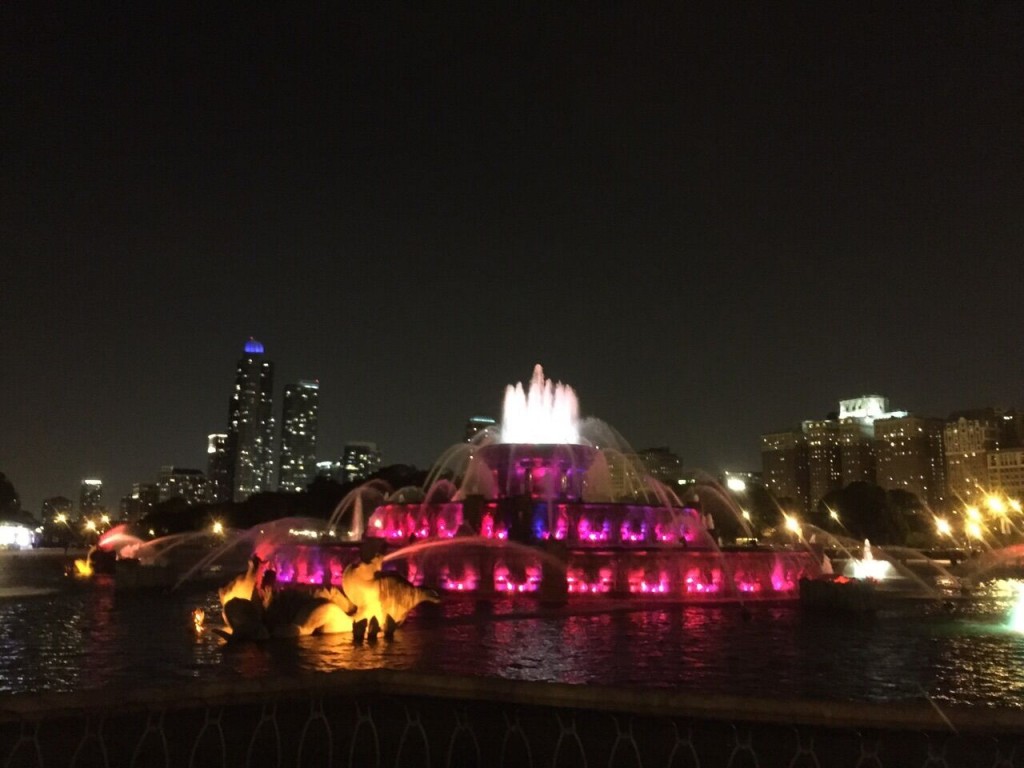 The Buckingham Fountain attracts visitors like a colourful flower garden lures in a large swarm of bees (Photo: Martijn Sargentini)

Entertainment in this park is sugar sweet and easy to digest, with nothing left to chance. Tomorrow, the exact same meal will be dished up in the exact same way. I guess it’s an acquired taste.

A taste that pleases five million people in Chicago every year.

Martijn Sargentini was born and raised in Amsterdam. He studied Urban Planning at the University of Amsterdam and now manages the regional cycling investment programme at the City Region of Amsterdam. He followed a course in narrative journalism, and writes for professional cycling magazines and sites (Soigneur, Hetiskoers). When abroad, he sneaks in abandoned buildings and takes pictures. Follow him on twitter @Martijn_Sarg
https://twitter.com/Martijn_Sarg 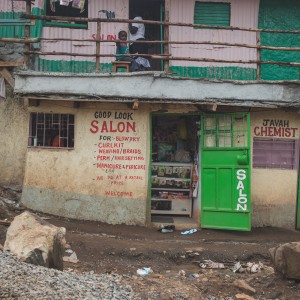 Kibera in Nairobi remains one of the world's largest informal settlements, with census data from 2009 claiming no less than...
© 2012 - 2019 The Protocity.com. All rights reserved.
Back to top