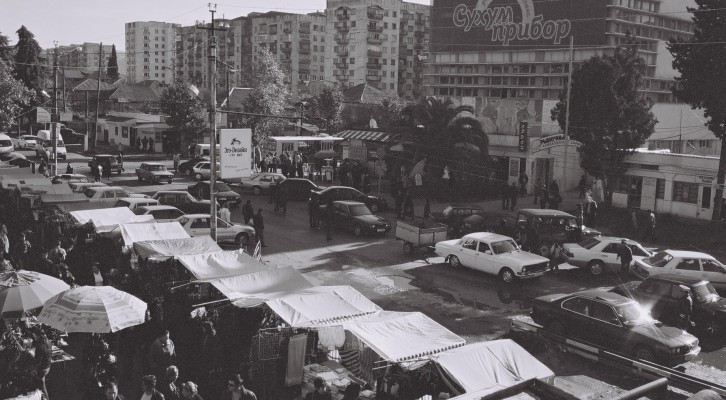 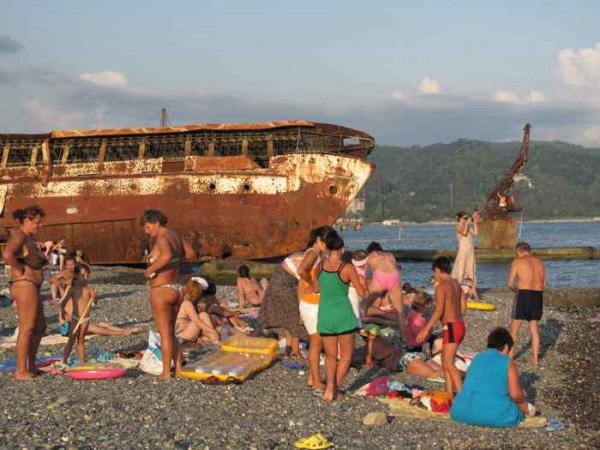 Domino Effect pictures a couple struggling in their search for a common goal, while being agonizingly aware of the transcultural differences in a region of instability and transition.

The documentary makes very clear what individual struggles there are to be found in the everyday lives of transnational (i.e. Russian) migrants in Abkhazia. Whether or not this is arguably legitimate in terms of the historic political struggles seems irrelevant, when looking at the multi-cultural couple and the decent living they try to uphold. It is a struggle of people; two persons in particular: Rafael and Natalya. Rafael struggles for independence and recognition of his Abkhazian identity, while the ambitious Russian Natalya seems to be denied and degenerated by her family-in-law. It is the perfect setting for a story of an impossible love; one strives for his identity, while the other – secretly – would have loved to have lacked the identity she currently holds. 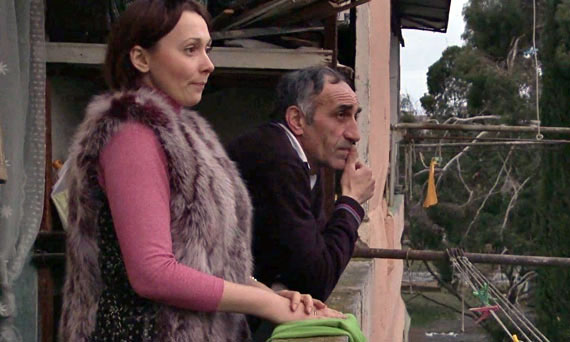 Rafael and Natalya: two lifes one world (Still from the documentary)

The male character, Rafael, is the minister of sports and is trying his best to make something of his country. By organising the world championships in domino, he – be it temporarily – centres the world on the partially recognised state.

The female character, Natalya, is perhaps the most interesting part of the documentary. As for being Russian, she argues she is hugely disadvantaged by the Abkazian community. She is frustrated by not having the chance to get employed; ‘I have two university degrees, but no one wants to hire me because I’m Russian.’ Arguably even more worrying is the fact she is denied access to the family party where her partner seems to be at the centre of political discussions.

Natalya protects her child from this discriminative setting, where the ceiling of own social mobility reaches as far as the everyday life on the beach. A beach could normally be seen as lazy and relaxing, in the eyes of Natalya it is everything but. Looking at the horizon that promises golden times and innumerable opportunities, which she will never reach. It is a clear cut example of a person in between two worlds, being of Russian decent in a semi-autonomous region that is too busy finding out what its own identity is defined by.

Sukhumi; a former Paradise which struggles for its own identity

And that is why the backdrop of the documentary is so incredibly suitable. The individual trajectories of Natalya and Rafael that account for many disturbances are situated in the Abkhazian capital Sukhumi: a city devastated by war in the early nineties. A shipwreck in the water, a rusty pier splitting the sea, a Detroit-like building that lacks any windows and the electricity which drops out constantly. The filmmakers Niewiera and Rosolowski show us a city of former beauty, but current standstill, where investments lack and where people wander the streets and mostly enjoy family life.

Telling in this setting are the two old guys playing domino while ‘contemplating’ life. Having experienced a bloody war against the Georgian forces, they prefectly explain what Abkhazia is currently dealing with as a post-Soviet region.

A strong hangover from a fierceful fight for independence while still struggling for an internationally recognised national identity. The only way the stress with which these developments are combined can be dealt with is and sort out a certain ‘Effekt’: the ‘building’blocks of a game called Domino.

Thanks for sharing your thoughts about judi sbobet. 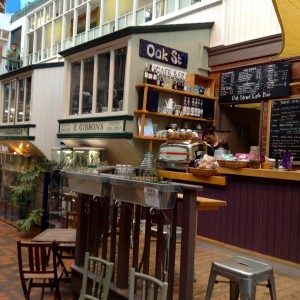 Nowadays, The Northern Quarter is often defined as one of the most exciting parts of Manchester. Its buzzling and vibrant...
© 2012 - 2019 The Protocity.com. All rights reserved.
Back to top