It is a bit over a decade ago that one of the most horrifying and lethal natural disasters of recent history happened: the Indian Ocean tsunami. On 26 December 2004, at 8:15am local time, waves as tall as 30 meters smashed onto the Sumatran coast, destroying everything they found on their paths.

The death toll of the event is estimated at 230,000 to 300,000 people worldwide. Indonesia and Sri Lanka were struck most, but countries as remote as South Africa and Yemen reported casualties too. About half of all fatalities took place in Banda Aceh, the capital of the Aceh province on the northwestern tip of Indonesia, not far from the earthquake epicenter. Another 500,000 in the area were displaced, and countless people suffered from traumas and other sorts of mental disorders in the aftermath.

It was a blessing in disguise that many people worldwide were celebrating Christmas when the shocking footage from Banda Aceh reached their living rooms. The financial and humanitarian aid that came in from abroad facilitated the Acehnese greatly in recuperating their devastated lands relatively fast.

At first sight, Banda Aceh resembles any other provincial town in Indonesia. Honking tuktuks, glittery mosques, rundown colonial buildings, children playing on porches of detached houses, a large central park, the smell of durian and street vendors all around. When looking closer, tsunami evacuation points and escape routes (see photo) can be found throughout the city. Roads are wider and buildings taller than before, to provide shelter against the forbidding waves. 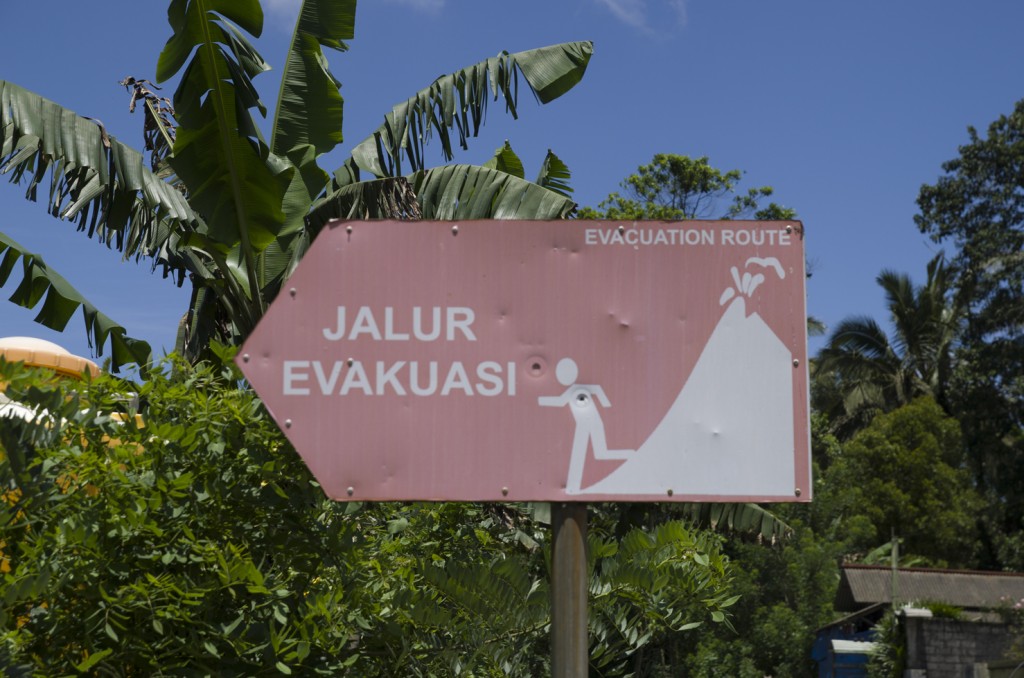 Evacuation sign near Gunung Lokon, an active volcano on the outskirts of Tomohon (Photo: The Blen on Flickr)

My English-speaking driver Awiey, a man in his late thirties, took me around in Banda Aceh. While passing some eerie reminders of the town’s horrific past, Awiey explained how he lost 21 out of 24 family members during the tsunami, and how he tried in vain to keep hold of his nephew, which he would never see again after he lost grip.

In a city that lost almost half of its population over the course of a few minutes, everyone has a story to tell. Of sights of shredded corpses while floating around on tree trunks. Of how they were having breakfast at the time of the event. Of pictures they took with Bill Clinton or Jackie Chan when they visited the disaster site. Of how they have never been back at the beach ever since, or even fear running tap water nowadays.

Aceh has always been a peculiar region in the Indonesian archipelago. It is known for its devout Muslim belief, natural resources and unceasing resistance against colonial powers, and therefore its role in the Indonesian independence cause.

The Indonesia Raya (Greater Indonesia) movement, aiming at unification and assimilation of the so-called Malay race, already started decades before Indonesia had proclaimed its independence in 1945. When the first presidents Sukarno and Suharto pursued such policies, resentment grew in remote areas with strong feelings of ethnic chauvinism, such as Papua, East Timor and also Aceh. The Acehnese separation movement (GAM) started to become more militant in the late 1970s. Decades of guerrilla wars and harsh military crackdown followed. However, it was not until the tsunami occurred that the province obtained the autonomy it had been seeking.

It was no surprise that the strictly Islamic Acehnese implemented sharia laws soon afterwards. Many regarded the tsunami as a punishment from Allah for the sins they had committed. The Grand Mosque of Banda Aceh was the only building to remain standing in the wide area. Some believed this to be a sign from heaven, too. 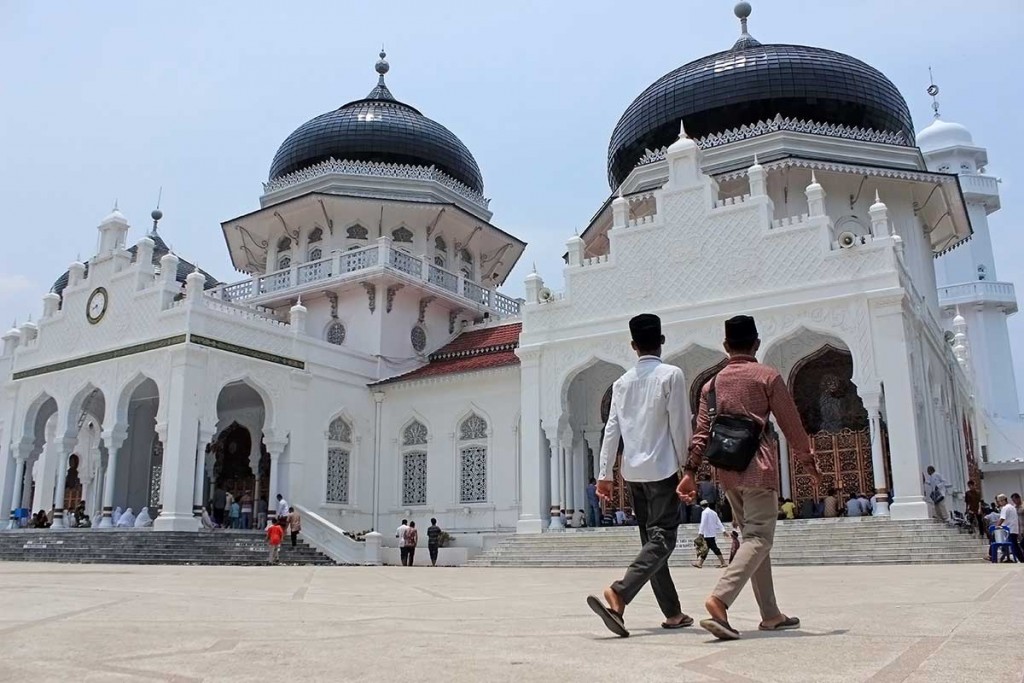 Awiey had been smiling and joking around from the moment I entered his tuktuk, and inadvertently justified his ever positive nature with a simple “what else can I do?”. Nothing will ever erase the horrifying tsunami images from their minds, but with the judicial autonomy from Jakarta and their houses and infrastructure reconstructed, the people of Banda Aceh dare to think about the future again. It is the call of the muezzin, rather than the foreign aid workers’ shifts, that defines the time of day again.

The new challenge for the Aceh government is to run the local economy independent of foreign aid. Some locals, including Awiey, complain that large sums of money earned with Aceh’s oil and gas reserves are remitted to Java, Indonesia’s most populous island. Other hazards to revitalizing the economy lurk as well. The corruption levels are high and governmental resource allocation has been criticized heavily.

The autonomous administration’s aim now is to lure tourists by openly presenting and marketing the suffering the area has undergone. The concepts works in other places with a dark history, for instance Pompeii, Chernobyl and the Killing Fields of Cambodia. 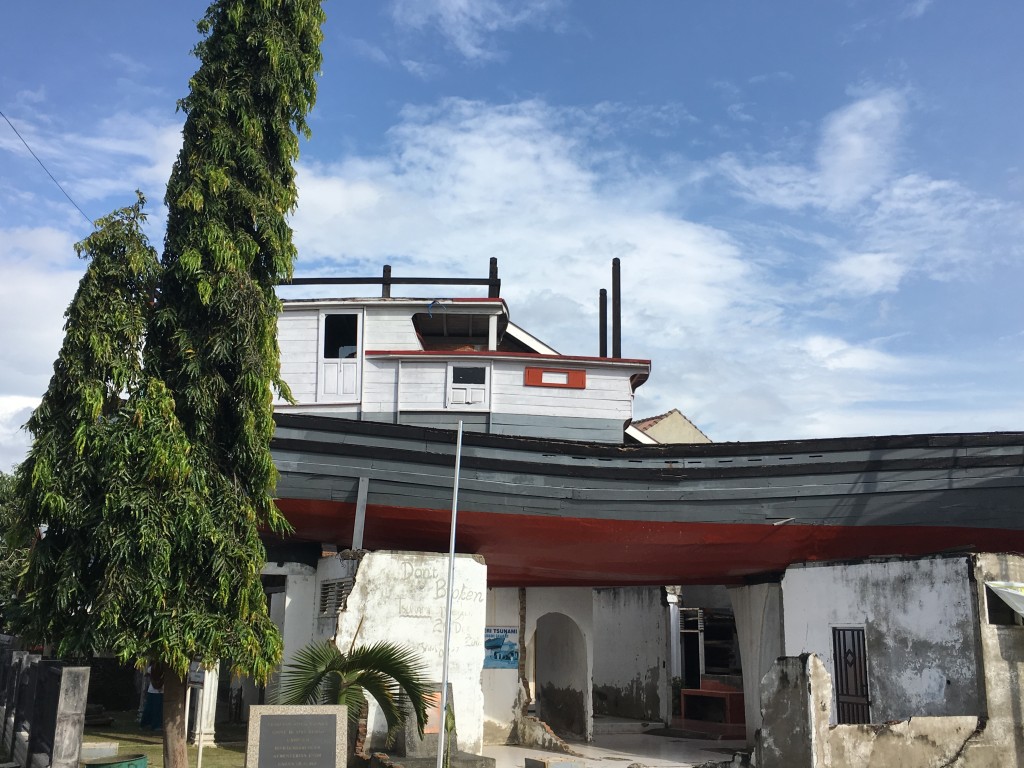 A boat stranded on the roof of a house (Photo: Steffen Fokkema)

Some quirky remnants of the devastating event, such as mass graves and a gigantic electrical generator ship that was swept kilometres inland, already attract considerable amounts of holidaymakers. The central Tsunami Museum is the most eye-catching landmark, but also the underwater paradise of Weh Island and the surfer’s delight of Lhoknga have seen a great influx of tourists lately.

Two years after the event, Awiey got married to his wife with whom he now has two children. Like many of their partners in distress, they decided to move away from the coastline that is laden with heart-breaking memories. Awiey will not let the past determine his family’s future.

Steffen is an external PhD candidate at the University of Amsterdam, and lives in Bali, where he is employed as Academic Coordinator at Stenden University. His research examines success factors in cooperation between border towns. When his agenda allows him to, Steffen heads out to explore out-of-the-ordinary destinations. 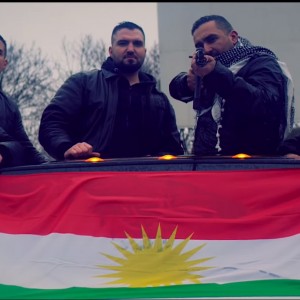 Observations from the German Rap Scene Eastside versus the Westside, Bloods versus Crips, Queens, Brooklyn, Bronx. Where...
© 2012 - 2019 The Protocity.com. All rights reserved.
Back to top