Lately, there are a lot of protest situations happening in Hamburg, two articles have been published here on The Proto City dealing with protest culture. I found myself, walking by protest situations in a hurry, thinking: „Oh, another protest, well ok”, just because a lot of protest situations are alike in their sight. The question occurs, if people aren’t tired of this way of demonstrating. The following text tries to give answers to questions that cumulatively occurred to us lately, concerning the visual aspect of protests in Hamburg: What visual output do we remember, what do we see frequently and what does this tell us about Hamburg´s protest culture?

During the research about the Hamburgian protest culture we asked a lot of people for potential interview partners and agents. It turned out, that a remote friend has been active in the left scene in Hamburg since she moved here over twenty years ago. Over a cup of coffee she told that her profession nowadays as a graphic designer developed out of engaging in a protest. In the beginning of the nineties, she was part of the first protests dealing with the preservation of the self entitled autonomous centre Rote Flora in the district Schanzenviertel, by creating posters and flyers self-taught on an old silk screen-printing machine. Her style in creating visual output concerning protest is still sought after, initiatives contact her from time to time when they need a piece of skilled, meaning made by a professional designer, visual output. Her individual skills play a role in the visual layer of the protest culture network in Hamburg.
We want to differentiate between individual and individualistic work here. Every piece made by someone is individual, as individualistic we want to claim work, that has a certain recognition value and can stand for itself. The following deals with individualistic attempts and their impact on the perception of Hamburg’s protest culture, and the impact on the network, creating culture.

Mostly groups perform protests and demonstrations, and individuals, who take in their own mindset concerning the protest, form groups. Observing the visual layer of many protest movements, like the ones for the sake of the Esso houses, the newest against Prism, or the demonstration two weeks ago against police violence in Hamburg, it occurs that the majority of protesters ostensibly stick to a common protest look in most cases, a certain nostalgia for past protest movements can be found. When taking a look at the actual protest marches dealing with the contestation of the Esso Häuser ensemble in St.Pauli, the biggest part of protest symbols (one could also speak of protest tools, or media) are well known ones such like flags and banners. All you need to make a simple sign like this is a canvas to write or draw on (usual: paper, carton, fabric) and a pen or a spray can to put your individual or taken over claim. It is not that far to seek that the look of these banners traces back to the fact that it is just the easiest and cheapest way to make your message visible; their usage goes back into history. Visuals like these are for sure inevitable. When protesting, a mass displays the backing the movement has among people. But what gives a movement its face (in a visual way), and makes people stand and watch, are often individualistic attempts of attention-grabbing objects or ways of demonstrating.

One example of this assumption is the megaphone choir VERSTÄRKUNG, formed by the artists collective Schwabinggrad Ballett. Curating and performing, they realize projects in a broad variety between political campaigns up to making music. They caught our attention on a demonstration for the Esso houses. Quotes of the inhabitants out of interviews made for a movie about the ensemble were used and shouted out in unison, integrated in a choreography. Red tights, black dresses, red lipstick: their outfits created a strong picture. We´d like to see this as a demonstration of the relationship between the initiative and the diverse other protest groups in Hamburg: collectives adapt information in their own way for the sake of the concerned protest. The megaphone choir adds a layer of novelty to the variety of forms it’s protested for the Esso houses retention. New, inventive, surprising layers of protest, while otherwise people engaging themselves rely on common visual output while protesting, are the ones that seem to at least render a memorability in a visual, and also performative way.
Schwabinggrad Ballett used this performance just for the Esso houses discourse; the look was created for this one concern. Following this thought, what caught our attention at the Euromayday protest 2013 was a specially transformed bike, that had megaphones attached. Common protest symbols like megaphones and a poster attached on the back of the bike where used here as well, but transformed and attached to the bike construction, the degree of attention increases. We found out this bike is also bond to Schwanbinggrad Ballett later on. 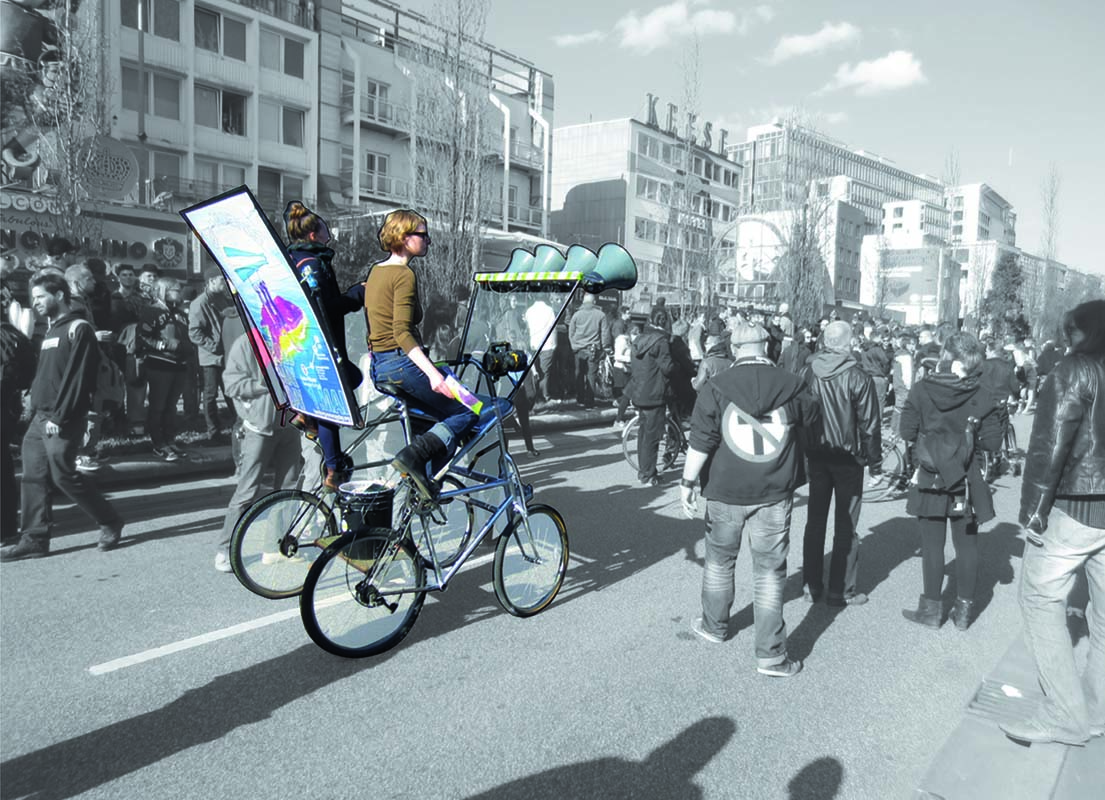 The Megaphone Bike on Euromayday 2013

The effort people put into individualized, attention-grabbing tools of protest displays how the creativity goes into small, individual actions in the actual protest action. Protest culture lives by the impacts individuals make for the sake of the collectives mindset. When looking at the transformed megaphone bike, one can imagine how much time it took to build it, and even to create the idea in the first place. So it was not really a surprise spotting the bike on other protest occasions in the city. Protest culture in Hamburg lives from its network. Not only by people engaging in different protest situations with their own visual appearance and output, but also transformed in visuals like banners, that e.g. frankly say „Esso Häuser grüßen Hafenstraße“ (Esso houses greet Hafenstraße), in reference to Hamburg´s most known occupied houses in the eighties.

When looking at these examples, it becomes clear that the visual output of a protest does not rely on the work of professionals in visual communication. It relies on the output individuals make, who are mostly autodidacts in creating visual output and just express in a way that is satisfying for them. It´s not about pulling an overall, prefabricated image over a protest movement, but to see it as a growing process, in general and in the visual aspect. Protest culture does not seem to need a fancy, coherent design, it’s the variety of visual output that creates the picture of the protest, and over all, good design is about touching and moving people, literally.

Protest has a culture in Hamburg. Just as it has and had an impact on people engaging, they form(ed) it. The protest scene seems to be bond together. This is what a culture does. The protest culture can even pave ways for a life design, shows the example of my friend mentioned in the beginning. Among her friends from her times protesting for the Rote Flora, many made visual communication their profession, and most are still active themselves, or at least actively following the protest movements happening in Hamburg. Protest culture seems to offer tasks and an output channel for people: Not only by creating attention-grabbing things like the megaphone bike–protest culture can be an initial spark for a professionalization. 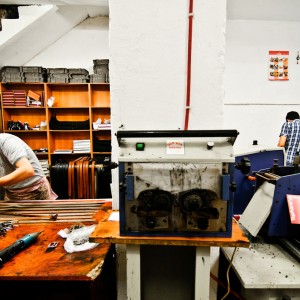 I have to admit, the title is stated somewhat boldly, does not sound flattering, and is rather socially deterministic,...
© 2012 - 2019 The Protocity.com. All rights reserved.
Back to top