Beyond natural disasters and poverty

Bangladesh has recently made the headlines of western media as a country of floods, collapsing garment factories and poverty. In addition, these media coverings often incorrectly portray the country as religiously and ethnically homogenous. Through this contribution I hope to enrich the image of the country and challenge some of the often implicit assumptions in western media. I will do so by looking at a largely neglected process of social change; the rapid urbanization and the challenges that arise as a result of it. This contribution is an outcome from my own experiences from a three-month fieldwork period in 2012 in the country’s capital Dhaka on urban migration and structural urban challenges in the city. During my stay my attention was drawn towards Chakma migrants, an ethnic minority from the Chittagong Hill Tracts, a rural region in the Southeast of Bangladesh. As the sections beneath will illustrate, Chakma migrants do not only face chronic urban challenges such as air pollution, traffic congestion and housing problems as other Dhaka inhabitants, but also face social exclusion on the basis of their ethnic belonging. Namely, Chakma migrants are by many other Bangladeshis considered to be underdeveloped people from the jungle. More broadly, the focus on this group of migrants reveals the additional challenges vulnerable social groups may face when migrating to major urban centers. 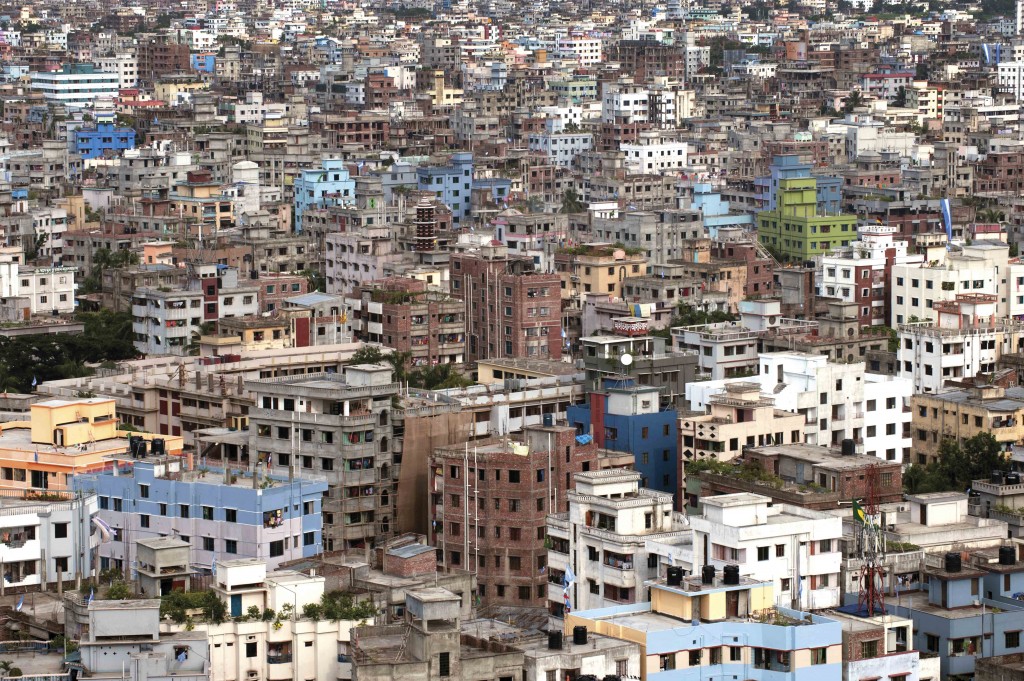 Bangladesh’s capital city Dhaka is changing rapidly due to the country’s increasing urban population. The city witnessed explosive population growth in recent decades. Whereas the city had 1,3 million inhabitants in 1970 this figure increased to over 15 million today. Since the UN estimates that the city will have over 23 million inhabitants by 2025 there is no reason to assume that this growth will stagnate anywhere soon. Taking into account that Dhaka is already the most densely populated megacity in the world with over 118,000 people per square mile (see figure 1), it will be a major challenge to make the city a pleasant place to live for its (new) inhabitants. This since the explosive growth creates several chronic urban problems for its inhabitants, particularly in electricity and water supply, extreme air pollution and an inadequate system of public transport. 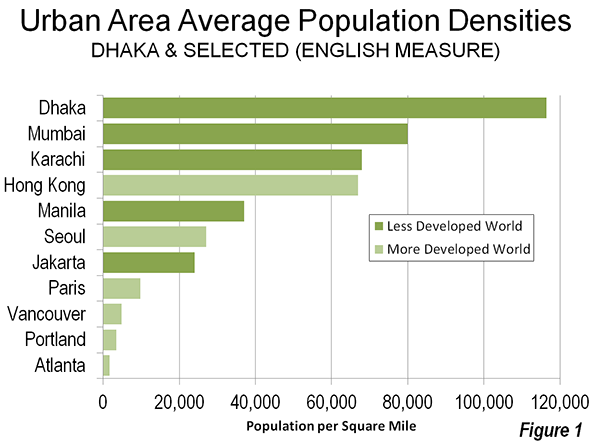 The majority of the city’s annual population growth, approximately 60% or 300,000 to 400,000 people are rural urban migrants coming to the city. People move to the city to benefit from the economic opportunities the city provides for example in the garment industry. Along with people from every corner of Bangladesh, the number of Chakma migrants coming to Dhaka has also strongly increased in recent decades. Whereas there were a few dozens of mainly Chakma students in the 1980s I estimate there to be around 15,000 Chakma migrants in the city at the moment. The following section will address the structural urban challenges that inhabitants in Dhaka face, after which the additional challenges for Chakma migrants are addressed. 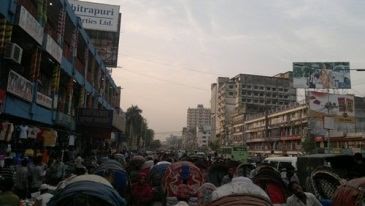 Estimates on air pollution by the Air Quality Management Project (AQMP) funded by the Bangladeshi government and the World Bank estimate that over 15,000 premature deaths occur annually in Dhaka because of air pollution. In addition, millions of respiratory and pulmonary illnesses occur because of polluted air. Another major problem in the city is extreme traffic congestion. The primary cause for this is the imbalance between rapid population growth and limited improvements in infrastructure. As a result the World Bank has given priority to upgrading transport services and infrastructure in the city in the upcoming decade but whether this will be enough to reduce congestion remains to be seen. Furthermore the lack of safety in traffic reduces the incentive to go out. Bangladesh has one of the highest traffic fatalities in the world and inhabitants of the city deal with experiences of (near) accidents on a daily basis, fueling feelings of insecurity in the city.

The focus on Chakma migrants in relation to urbanization allows for an adjustment of simplified representations of Bangladesh as an Islamic-Bengali nation in which ethnic minorities are only found in peripheral areas. Bangladesh is often portrayed as an ethnic and religious homogeneous country solely inhabited by ethnic Bengalis. Although a vast majority of the countries’ inhabitants do categorize themselves as Bengali Muslims, the country is actually home to many ethnic and religious minorities. Since Bangladesh’s independence from Pakistan in 1971 the process of nation building has largely excluded these minorities since being an ethnic Bengali – and more recently being a Muslim – became the most important characteristics of being considered a Bangladeshi national. This also means that people that do not look like Bengalis or have a different religious affiliation are often not considered as ‘true’ Bangladeshis.

This is exactly the case with Chakmas migrants. Chakmas rather resemble people from Northeast India, Thailand and Myanmar making them ‘look different’ from Bengali Bangladeshis. In addition, most of them are Buddhists. These differences are constructed in such a way in Bangladesh that Chakmas are not seen as ‘true’ Bangladeshis. More problematic is that Chakmas have often been portrayed in popular media and even schoolbooks as underdeveloped, uncivilized people living in a jungle. These stereotypical representations come to the fore when Chakmas migrate to Dhaka where they find themselves in the social, cultural and economic heart of Bangladesh while being confronted with exclusion because of their Chakma background. This comes to the fore through the story that Shoran, a 26 years old student, told me about when he came to Dhaka for the first time over six years ago:

“When I first arrived at the campus my classmates asked me about my food habits. In primary school they had been taught that we eat jungle foods you know. So I explained them that it is similar to theirs. They thought we eat snakes, frogs, monkeys and such. It is because it was in their schoolbooks. They used to say we were underdeveloped, not wearing clothes and such.”

Thus Chakmas in Dhaka do not only deal with the localized structural urban challenges as all migrants do, but they also face social exclusion and public harassment on a daily basis. This is a result of the dominant stereotypical representations of them as underdeveloped people from a jungle which forms a stark contrast with their actual modern lifestyle in the urban jungle of Dhaka. Paradoxically, they find themselves challenged by moving from a rural area that is imagined by many Bangladeshis as an untouched jungle to Dhaka’s urban jungle.

Jacco completed his masters in Social and Cultural Anthropology (MSc) at the VU University Amsterdam in 2012. At present he is a student at the masters programme in Asian Studies at Lund University. His academic interests are rural-urban migration, ethnicity and diversity issues with a special focus on South-Asia, and Bangladesh in particular.

Thanks for the interesting article, Jacco!

I was wondering about quite a few things though while reading it. First of all, is the situation of the ‘Chakmas’ rather unique or are there many comparable groups that face similar forms of discrimination and exclusion? And are they being institutionally excluded as well? Do they manage to find satisfying jobs at all?

Also, from your perspective, to what extent do you think they manage (and want) to integrate into the ‘ordinary’ Bangladesi society? Do they consider themselves as being ‘different’ as well, and are they concentrated together within a particular area/ slum? In other words, what is the main impact of this severe stigma they face?

I hope you will be able to provide an answer to at least some of my questions! 😉

Thanks for your comments Jorn. The situation of Chakmas is far from unique in Bangladesh. There are many other ethnic or religious minorities, from the Chittagong Hill Tracts region alone already 12. However Chakmas are numerically the largest group among these and since I spent most of my time among people from a Chakma background my focus is on this group here.

Institutionally there has been some progress against social exclusion, for example by setting quota’s at universities for students from these groups. Problem is that notions among many Bangladeshis are still influenced by notions of underdeveloped people which contributes to social exclusion. However there is off course not one Bangladeshi voice, some Bangladeshi do see these groups as enriching and diversifying the country. Today for example an article in the Dhaka Tribune argues for a protection language diversity of these groups..
http://www.dhakatribune.com/editorial/2014/feb/25/our-duty-protect-language-diversity

A ‘satisfying’ job is a difficult term in the Bangladeshi context. Some migrants, particularly those with university education, find there ways to NGO’s and public service jobs. Others, predominantly lower educated migrants, work in garment factories or in service. Many people however face extra hurdles as a result of discrimination, for example by not being promoted.

Almost everyone I spoke was very clear in that they did feel really Bangladeshi but were not treated as ‘full’ Bangladeshis by others. There are many things that have influenced these notions. One important matter is a low intensity conflict between the Bangladeshi military and a Chakma domination organization, the PCJSS between 1975 and 1997. For more info see:
http://en.wikipedia.org/wiki/Chittagong_Hill_Tracts_conflict

In order to answer your questions more thoroughly I am affraid I need a lot more space to illuminate all the different aspects that are important here to somewhat grasp what’s going on 😉 But I hope this provides some insight..

From social anthropology perspective, have you got the opportunity about where do the Chakmas live in Dhaka city? What is their methods of livelihood management as they migrate to town? How they have cultured the environment surrounding them and transformed their spaces and places (low income settlements or slums) into gardens? Are they practicing gardening in the city, or they have given up gardening for livelilhood management due to social stigma as they are “forest soceity”?

I shall be interested to know. What is the topic of your postgraduate thesis? I am very interested in slums and urban ecology and urban gardening.

Hi, can you do an article about Bengali Muslims in so called Northeast India? And an explanation of the region and how Bengalis have inhabited Silchar and Goalpara for centuries where as the rest of the Northeast they were taken during the British era. Touching upon the ethnic cleansing and massacres they have faced over the past 70 years despite their not being a violent militant terrorist group operating among them for separation like those seen in Bangladesh. 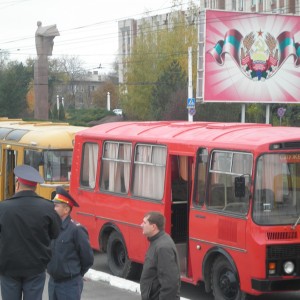 Welcome to a rather special edition of our Suicide Cycle Tour series. Instead of taking you to one particular, well-known...
© 2012 - 2019 The Protocity.com. All rights reserved.
Back to top