3 TEDx- talks on governance, slum development and the illness of suburbia.

This time, three inspiring TEDx talks are reviewed. These TEDx talks focus on urbanity in a variety of ways and provide us with a glimpse of good governance in Rio de Janeiro, a hopeful vision on squatterments over the world, and a detrimental view on America’s suburbs.

Cities are beautiful. Like Rio, 6,5 million talents working, collaborating and creating together.

The mayor of Rio de Janeiro, Eduardo Paes, provides us with a 12 minute delight on how to govern urban areas. He simply outlines what is needed to cater future cities. Using ‘4 commandments’ he argues that cities should be green, socially integrative, adequate mobility and should incorporate technology.

The first three valid concepts are illustrated by the mayors experience of clear-cut implementations: from park development, the construction of health care and education facilities in the favelas, towards the development of mass transit bus lines (far cheaper than metros). Paes’s hands-on conceptualisation of what a city needs is surpisingly refreshing. Together with his genuine enthusiasm for making cities better places to live in his presentation is rather catchy and might give the audience the feel of direct action. One can see his effort to stress that every citizen of the city should be welcomed and integrated in the full extent of what a city can embody.

All great, all fine. But the fourth commandment – incorporate technology –  seems then out of place. From being integrative and stressing that cities are conglomerations of people that need to be integrated, he literally switches to Rio’s central command and control base that uses technology to govern the city. Meaning: camera’s everywhere, gps everywhere.

Next to Orwell’s ‘Big Brother discourse’ it is touching upon, Paes makes a statement that alienates himself as a mayor from its ‘socially integrative’ talk: ‘I don’t need to be in the city to govern the city.’

A bomb under his simple, but clear-cut and therefore visionary talk. Click here to watch.

TEDx #2: The vitality of Slums

Consider slums as a legitimate form of urban development.

Robert Neuwirth presents his book ‘Shadow Cities’ and gives us an insight into slum development. He starts his story by saying slums will be the cities of the future. Currently, 1 billion people live in slums, and this amount will grow rapidly. But rather than looking at the problems, Robert Neuwirth recognises the vitality of the slum communities.

A positive story about slums. There are two conditions for slums to replenish cities. One; slums should not be evicted, in order to build in security for its inhabitants without having the economic responsibilities of taxing like other urban neighbourhoods have. In this way, slum communities can develop.

Two; slum communities should have access to politics. He means two things with this. Politics from below: have the right to stay there and recognise it as their own property. Politics from above: government should see them as legal sub-neighbourhoods.

It’s all about the freedom to develop. Good to have a positive story, but in his explanation of what is necessary to make slums part of the city, he suspectedly gives three different conditions. However, they all overlap. Hence, his talk can be summarised around the most important quote of a full recognition of slums as legitimate urban neighbourhoods.

With this statement, he links up to Eduardo Paes’s belief of a socially integrative city, where all citizens have the right for a place. And instead of blocking these slum developments, urban governments should rather facilitate and help these self-arranged squatterments. To watch Robert Neuwirth, click here.

I like to call it ‘the national automobile slum.’ You can call it suburban sprawl. I think it’s appropriate to call it the greatest misallocation of resources in the history of the world.

The funniest talk of the three. The social critic James Howard Kunstler cynically explains us what is wrong with suburban America. Although suburbs have developed to bring the countryside to the city, he argues that ‘suburbia’ is the most disconnected form of built environment and the furthest away from nature.

Suburbs have no public realm. Suburbs are without plazas, public places and therefore degrade the quality of our civic life. The built environment is existent in order for us to relate to the culture we stand for. With suburbs, this relation is totally disjoint. Together with the energy spill issues, we therefore have to get back to cities.

A funny talk from this critic. Kunstler is cynical and tremendously witty. His clear view of what we as citizens need to do is refreshing, but his analysis does not go very deep. He is describing the issue and pinpoints the possible effects. In this way, one gets acquainted with the main problems concerning suburbia, but to fully understand his argument, one needs a bit more information on the urban society  in general and the spatial forms urban society has been living in. But certainly watch James Howard Kunstler. 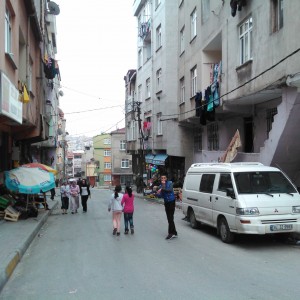 With almost 17 million inhabitants, Istanbul is Europe’s largest city. It is almost unimaginable that this metropolis had a population...
© 2012 - 2019 The Protocity.com. All rights reserved.
Back to top