The concept of neoliberalism has revealed similarities between urban developments and resistance movements across the globe, demonstrating the deeper unifying threads of the contemporary configuration of capitalism that connect diverse urban contexts. This blog explores how the present neo-authoritarian Turkish government drives spatial change in other, distinctive ways that contrast with neoliberalism, instead using Islamist and neo-Ottomanist strategies to retain, and produce spatial representations of, its power. 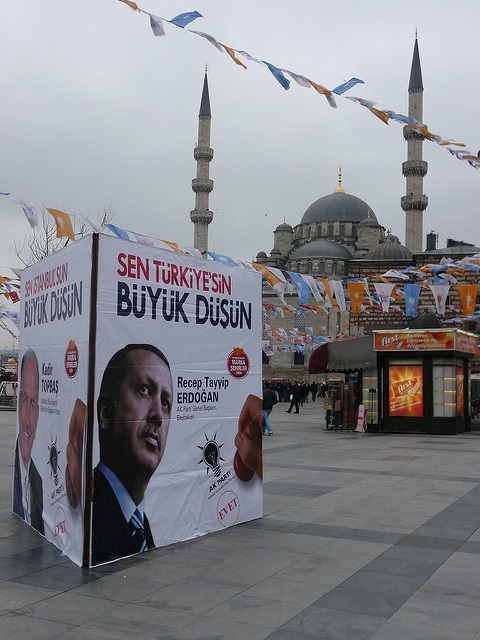 Neoliberalism is the lens through which much urban change is analysed today (for instance in texts by notable urban geographers David Harvey and Neil Brenner), however the concept is now so widely applied that its meaning has become stretched and incoherent, and its use arguably hinders analysis Using a definition of neoliberalism (or the process of neoliberalisation) as the promotion of market-oriented logics by the state, penetrating into an ever-larger range of economic and social domains (including the value systems and behavior of individual citizens), I dispute its utility in the context of Istanbul.

The economic growth and political stability of the 2000s enabled a massive transformation of Istanbul, which many accounts have characterised as typically neoliberal (including the film Ekumenopolis, reviewed on Protocity here). For example, the commodification of previously informal settlements and displacement of residents seems typical of gentrification processes seen in many cities. The similarities between Istanbul and other cities undergoing radical transformation in the period (of which there were countless other examples) were seen to be greater than any differences.

The drive to transform and own the city

The distinctive political and economic context is vital to consider though. Istanbul is a vital site for the production of continued national economic and political success for the AKP regime. 89 per cent of the $22 billion invested in Turkey in 2007 was absorbed by Istanbul. As the most populous city (14 million inhabitants out of 78 million in Turkey as a whole) national electoral victory is practically impossible without the support of Istanbul. The city also has symbolic importance, particularly as capital of the historic Ottoman Empire, and remains Turkey’s foothold in Europe. Maintaining control of Istanbul, and visibly dominating the space, has been a central project of the AKP, and a largely successful one. 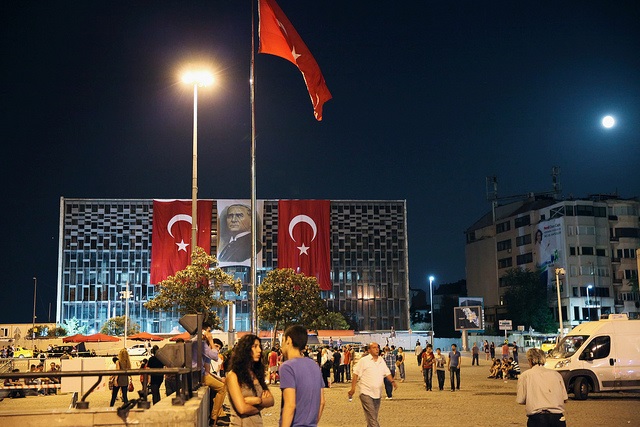 Representing the regime in public space

The symbolically potent Taksim Square is at the centre of Istanbul. The drive to shape the space with representations of values has been taken up with urgency by the AKP over the past decade. With Istanbul increasingly being a globally marketable asset for tourism and investment, Taksim has been repositioned accordingly in government plans. The transformation envisaged by the AKP is fourfold: pedestrianisation with traffic moved underground, reconstruction of the Artillery Barracks, demolition of the modernist Atatürk Cultural Centre, and the building of a mosque. Opposition to the proposed changes grew from one environmentally focused into the huge Gezi Park protests of 2013 centred in Taksim, but spreading to the entire of Turkey. As seen in many cities globally in the same period, a diverse protest movement was formed in opposition to government-induced spatial change. It is possible to see neoliberal characteristics at work here: the state producing spatial change to seek global capital investment and touristic interest (and facing protest).

The maintenance of stable, authoritarian rule by the AKP is a major driving force behind the production of urban space in Istanbul which should be considered. So-called neo-authoritarianism – that is the reinvention of authoritarianism using cities to glorify national leaders – is employed using the strategies of Islamism and neo-Ottomanism, and often overshadowing, or even precluding, the implementation of recognizably neoliberal policies.

The Islamist influence on the production and maintenance of space has benefits for maintaining AKP rule, while contradicting neoliberal logics both in intention and outcome. Although the governance of Istanbul is not Islamist in the sense of a theocratic state structure, religion plays a vital role in the organisation of civil society and urban development. Networks of economic and political interdependence created firstly with an emergent Islamic capitalist class and secondly with the urban poor receiving aid are effective at ensuring the continued electoral success of the AKP despite traumatic residential displacement and frequent massive public space protests.

The exchange with the first group, the emerging Islamic capitalist class known as the ‘Anatolian Tigers’, is an exchange of lucrative construction contracts from the AKP to these firms, receiving political support and funding for aid in return. With the second group, AKP distributes aid framed as traditional Islamic morality – in the absence of formal welfare (or the more neoliberal equivalent, workfare) – and receives vital political support in return. This is known as the political economy of ‘sadaka’ or alms-giving. Similarly, the government regularly uses faith-based aid practices in Taksim Square, filling the space with fifteen hundred volunteers serving free fast-breaking meals in the evenings during Ramadan.

An anti-neoliberal logic is at work here, with the state working in ways that preclude individuals acting as rational market actors and a progression towards an ever-freer market and entrepreneurial state, with the distribution of aid operating outside of market mechanisms. The priority is the creation of an exclusionary faith-based nationalism, forming a new stable and loyal commons, different from the previous secular nationalism of the original Turkish Republic as well as the atomized free market society of neoliberal ideology.

Another technique used by the AKP regime in their production of space is neo-Ottomanism: that is, using architecture and imagery reminiscent of the Ottoman era to project a neo-authoritarian vision of nationhood and give legitimacy to the regime. This is evident in the current plans for the transformation of Taksim Square (outlined above) along with past . Here I disagree with accounts presenting the AKP planned transformation of Taksim Square as a neoliberal project to increase the number of spaces of consumption, but prefer to emphasise the concept of the hyper-politicization of architecture: the use of the built environment as an instrument to ideologically influence, even control, the public. Space is heavily controlled here, not allowing for the exercise of protest nor, importantly for our discussion around neoliberalism, the hyper-commercialization commonly seen in public and semi-public spaces of European cities. The emphasis is on constructions that can represent the continuity of the regime with the Ottoman Empire, such as the rebuilding of the Artillery Barracks and a mosque, and blocking constructions or activities which hinder this imagery, such as the modernist Atatürk Cultural Centre. The outcome of the neo-Ottoman project for Taksim Square is a space that actually precludes, rather than produces, increased commercialization of public space. 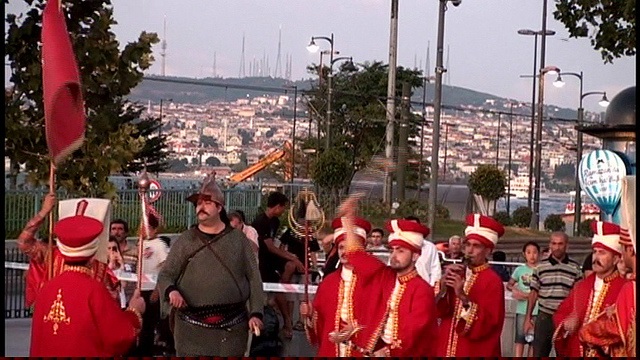 The transformation of Taksim Square in the years of AKP rule has been shaped primarily by forces of faith-based communitarianism and backward-looking traditionalism in the interests of the continued rule of the governing party, and producing spatial representations of its power.

One way to debate the interaction of the competing, sometimes contradictory forces at work is to describe neoliberalism as instrumental in the realization of the illiberal aims of the regime. However it is illogical to position neoliberalism in such a way. Neoliberalism is a concept of the state acting in the interests of the market, and not vice versa. Research continuing to focus on neoliberalism will fail to adequately support protest movements, focused as they are on problems distinct from neoliberalism. The protests of 2013 were instigated not by neoliberal economic reforms but the growing oppressive and Islamist character of the government and its effect on civil liberties.

This is an abridged version of a paper which can be found here on academia.edu

Fred Paxton is a Master’s student in Urban Studies, currently based at the University of Vienna, as part of the 4 Cities Erasmus Mundus programme. He holds a History BA from King’s College London. His research interests include the use of urban space by political regimes and political conflict in European cities.
https://univie.academia.edu/FredPaxton%20

I respect the author’s effort to read the local context in Turkey, but I think otherwise: Turkish government’s spatial policies are very much aligned with the neoliberal policies, and “acting in the interests of the market” in the author’s words. The aid activities function only as a medium of camouflage, if not covering (at times dirty) monetary transaction activities. In short, it is more an oxymoronic/self-contradictory situation of capitalist conservatism. The relationship between authoritarianism and neoliberalism is also controversial for the same reason.

Thank you for the interesting piece.

Thanks for your comments, Meric. The question I’d like to pose with the article is – bearing in mind the fundamental motivations behind the government’s spatial policies – whether the term neoliberalism is really the most accurate and helpful?

I do see that encouraging global investment and commercial practices are a vital consideration; however, it seems to me that even more fundamental is the protection and projection of the government’s authority. When the market can assist with this, it is used, and urban change acts in the market’s interest. But when it isn’t helpful, and the state’s power can be better protected through other non-market based methods, then other routes are favoured. I’ve tried to describe some cases where this is the case: perhaps you are aware of some more?

I worry that neoliberalism is a term that is over-used in the field, and risks being used to cover all urban development which makes use of (global) market forces. I think it would be better to limit it to cases when these forces are the truly dominant, fundamental driving force. In Istanbul it seems that this isn’t the case, and to label it neoliberal risks minimising the unique character of the city and its essential features.

I’d be interested to hear what you think though, and in particular hear more about the controversial relationship you see between authoritarianism and neoliberalism. 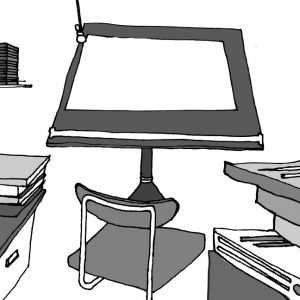 Ordering the City Using the Right Language In his essay, “Politics and the English Language”, George Orwell says a metaphor’s...
© 2012 - 2019 The Protocity.com. All rights reserved.
Back to top