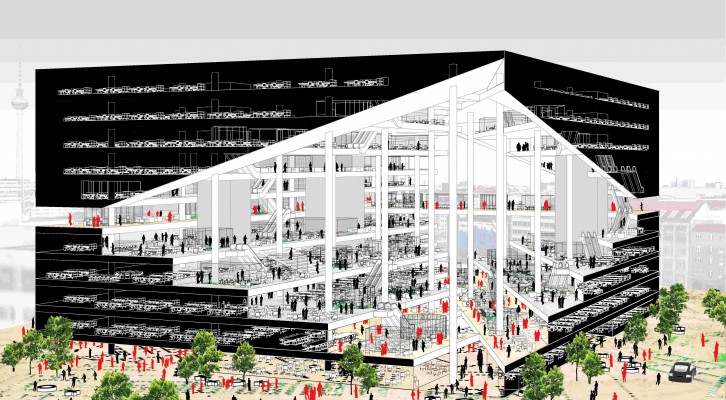 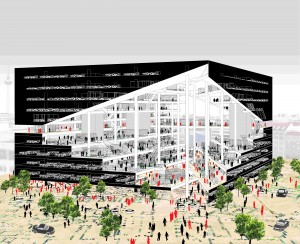 “Today there is no reason that a need for such a building with workspaces exists, because you can easily work from your house and email it….” according to Mathias Döpfner (2013), CEO of media company Axel Springer. Springer is one of Europe’s largest publishing houses headquartered in Berlin and most well-known as publisher of German newspapers such as Bild-Zeitung and Die Welt. Despite this somewhat bold statement about the workplace, Döpfner’s firm has commissioned the Rotterdam-based architectural practice OMA founded by Rem Koolhaas to design its new headquarters in the form of a media campus in the centre of Berlin. Why commission a new headquarters if people can work from their homes using their mobile devices? A closer look at the demands of Axel Springer for their new headquarters in Berlin and the conceptualizations of OMA’s architects gives insight into how an office space is still conceived to be relevant in our digitalized and networked 21st century.

With the ever-increasing role of information technology, diffusing global networks and the flexibilization of labour, many changes in the patterns of work are occurring. As geographer Paul L. Knox (1987) has argued, the built environment is both an expression of economic, social and political relationships within society and simultaneously reproduces and modifies these relationships. The production of space is a practice that is intricately connected to social change. The way offices are designed today thus can tell us a lot about contemporary values and work practices.

The design for Axel Springer’s new media centre in Berlin presents a striking case. With on the one hand a company who “has mobilized architecture to help perform a radical change” (Rem Koolhaas, 2014) and on the other hand an architecture practice which aims to fundamentally innovate working environments and create “a workplace in all its dimensions”, the question has to be asked: which ideas are at the core of such a supposedly innovative modern workplace?

Function of the Workspace

The reason to still be in a workspace today, according to CEO of Axel Springer Mathias Döpfner, is to communicate. Whilst digitalization has seemingly eroded the role of the workplace, it has simultaneously triggered corporations and architects to rethink the importance and benefits of the workspace and thus to reinvent the office. Strikingly, one of the greatest demands formulated for the Axel Springer media campus is that the building should be able to attract talented workers – or to quote Rem Koolhaas: it has to “lure the elite of (Germany’s) digital Bohemia to its compound in Berlin”.

Part of this luring should happen by including civic and cultural amenities within the Axel Springer headquarters. Encounters between workers and interaction with the public should be enhanced, as this is regarded highly beneficial for dynamic creativity. A “digital valley” will be created in the centre of the building, which is supposed to form an accessible space where the public can enter the building and join the activities taking place. At the same time the openness of this space “exposes” the company; the building “must broadcast the work of individuals to shared inspection” (Koolhaas, 2013).

The digital valley suggests the creation of a public or open space within the private corporate context of the Axel Springer headquarters. The space has two key functions: stimulating dynamic creativity and innovation and presenting Axel Springer as a transparent company, a “true digital common”. Transparency and sharing the work that is produced within the office is central to the concept of the digital valley. 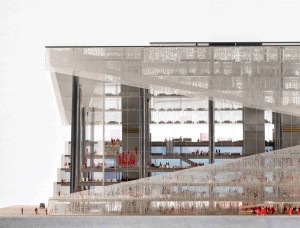 Whilst Axel Springer sees a work space where “cross-transversal things” are happening as beneficial for the collective intelligence and dynamic of the company, the development of civic and cultural spaces within private contexts also raises questions. When a private company delivers civic amenities, qualities generally regarded important to public spaces, such as accessibility and attractiveness to a diversity of users, become secondary to more corporate-led ambitions.

Also, it has to be kept in mind that the design of various accesses to a building does not necessarily create a publicly accessible building, just as a glass facade in itself does not make a company transparent. These design qualities are however used as symbols. Jérôme Picard (2014) – architect at OMA involved in the Axel Springer project – explains the importance of the symbolic value as follows: “…the aspect of being inviting, being open, being communicative, in an almost symbolic sense is absolutely crucial. So…it almost sounds like the definition of a civic place, such as a museum”.

The emphasis on giving the building iconic value and symbolic meaning is salient. Sociologist Manuel Castells (2004) theorized that in our network society architecture is being  “called to the rescue in order to recreate symbolic meaning in the metropolitan region, making places in the space of flows”. With space of flows, Castells refers to the domains which link up locations in the interactive electronic network. As electronic networks have gained prominence, architecture has to create places that matter in the geographic spaces of everyday life. The Axel Springer media campus illustrates how architecture is used as a tool – or in Koolhaas’ terms as “an instrument” – to create “cultural expression and meaningful exchange” – as theorized by Castells. This idea of architecture as an instrument reveals a functionalist approach and fits the modernist belief that architecture can bring about social transformations. 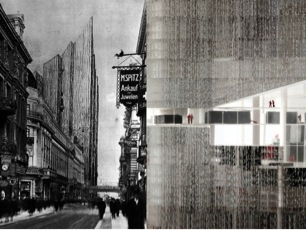 Visualization of Concept for Media Campus (Image Courtesy of OMA)

In contrast to a modernist approach though, in which design was expected to function everywhere equally and context was thus regarded of little importance, interaction with the space surrounding the Axel Springer media centre is seen as vital to its spatial and symbolic meaning.

“…if you imagine that …. the footprint of the building is greater than itself, that you also have added functions, that they are actually working in collaboration with other things around, people may want to actually stay there longer”.

This quote of architect Jérôme Picard (2014) illustrates firstly how the urban context plays a role in the design. The building should add to the diversity of activities that Berlin has to offer and interact with its environment. It is envisioned to be an outward-looking and transversal actor; work, play, leisure and culture are all brought together in the search for dynamic creativity.

Secondly, it shows, again, the need to attract people to stay in the headquarters. Digitalization has made work more footloose and therefore the workplace should offer more than “work” to draw workers in. The CEO of Axel Springer formulated the aim to “bring together independent entrepreneurs in order to create a family”. To prevent people from working at home, the company becomes family, museum, “public” space, all in one, in order to attract people to its campus? This integrated, multifunctional, cross-transversal space sounds attractive, but at the same time has to be regarded with caution as it means the blurring of boundaries between public and private space, plus the extension of the scope of Springer’s domain into ‘the open’. Allowing the public to participate in the activities going on within the media centre and to ‘inspect’ the work of the company, Axel Springer allows itself to use the input of the public and inspect their behaviour. 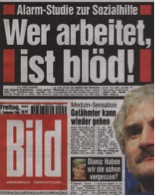 One thing is certain; the design for the Axel Springer Media Campus demonstrates that even in the information age, physical proximity is still valuable. As Jérôme Picard, architect at OMA, states: “actually this idea of communication and the idea that informal behaviour and meeting can only happen under one roof, is still relevant”. An extendable roof, that is.

Filming Cities: The Nature Of Cities 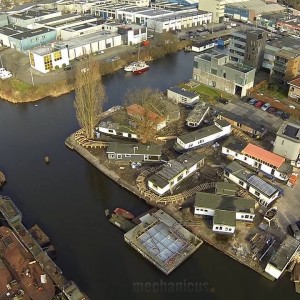 Dear Proto City reader, if you happen to be around Amsterdam this summer, there is this one place you really need to visit:...
© 2012 - 2019 The Protocity.com. All rights reserved.
Back to top