The Suicide Cycle Tour is back with a new episode, this time reporting from New York City and once again extending the Tour to another continent. Most certainly, cycling is a special thing in this moloch of a city that is famous for  many things but a welcoming environment for cyclists. Let me tell you more about cycling in NYC:

Generally, cycling conditions are tough and rough, definitely not suitable for the occasional scared rider as you are faced with a lot of challenges that for the cyclist socialized in Amsterdam are just insane and crazy. Bike lanes or dedicated routes are rare, so you almost always have to deal with road traffic, starting with those huge trucks that are in fact your worst enemy: Their endlessly long trailers are dangerous as is likely to miss the small cyclist which subsequently is having an unpleasant encounter with the back wheels of the trailer. Additionally, drivers seem to be inattentive in the sense that the mere presence of a road traffic participant that is not in a vehicle is a curiosity to stare at: what is that, where did it come from, why are there only two wheels and why is this person moving its legs? These questions are written on the faces of most of the car drivers here in New York City. Well, you can get used to these conditions, you will say. Yes, maybe. Or maybe not, because that is not all: The conditions of the roads are  bad across the city, with cracks and potholes that are likely to swallow you and your bike. 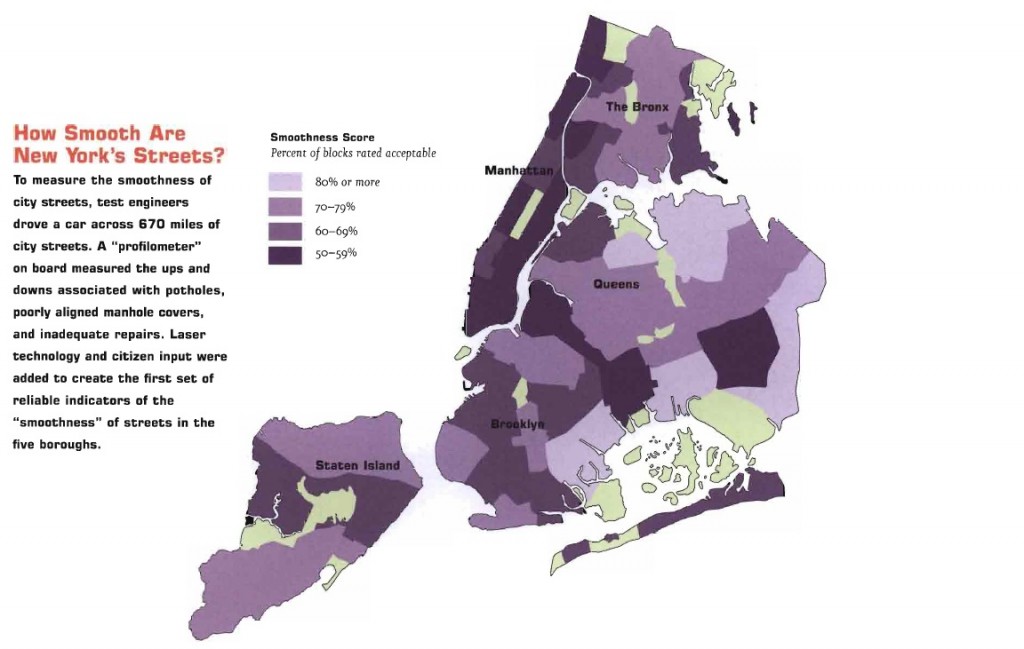 What is stunning in this context is the lack of a compulsory helmet. Cities as Amsterdam are discussing for a long period on the helmet issue even though cycling is perceived as rather safe in comparison to conditions in New York, where you find yourself in a state of uneven war with trucks, cars, buses and bad road conditions where nobody seems to pay too much attention to their surroundings or to traffic rules, as this video shows. Combined with the NYPD cops that don’t know the meaning of the word ‘mercy’ or ‘goodwill’ when it comes to cyclists, NYC is a tough place, as in this nice video by a NYC cyclist, who got a ticket for not riding on the bike lane. 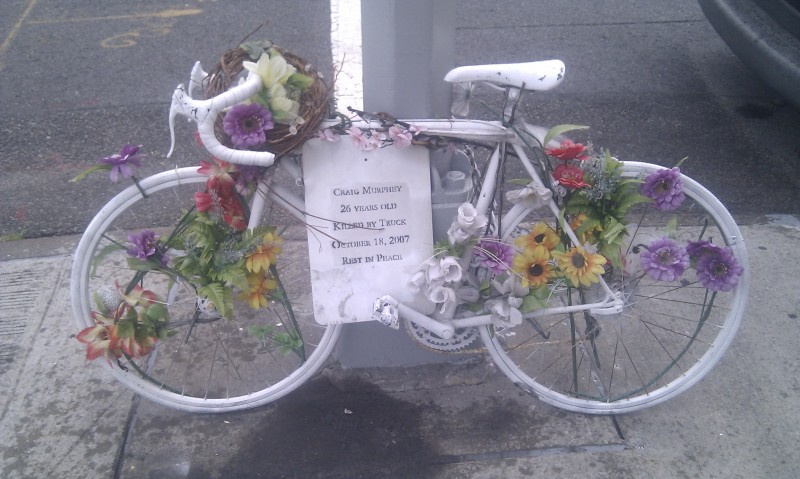 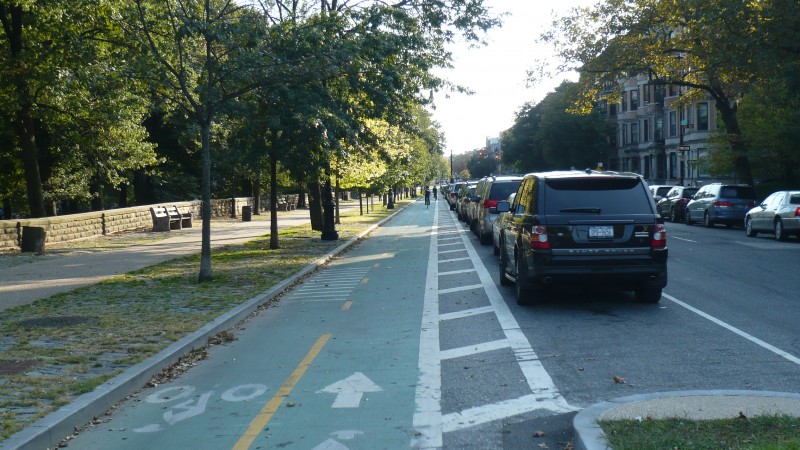 When looking at the map of bike lanes and bike routes (PDF) we see an emergent network that has evolved pretty quickly in the last year under the administration of DOT Commissioner Jeannette Sadik-Khan (some refer to her as being a bike activist, I cannot confirm nor disprove this statement), but is still some distance away from being a comprehensive network that is reaching all neighborhoods in all 5 boroughs. While the density of the network in Downtown Brooklyn and Williamsburg in Brooklyn and the Lower East Side and Greenwich in Manhattan is quite high, the rest of the city is lacking a sufficient amount of bike routes. Interestingly, all these neighborhoods just mentioned are ‘hip’ neighborhoods with a high share of well-educated and fairly wealthy inhabitants that profit of the network the most, whereas poorer neighborhoods like Bushwick have limited access to bike infrastructure (makes us think of the ‘right to the city’- debate). Bike lane arrangements tend to be confusing, especially the location of the bicycle lanes on the left side of the road in one-ways meaning that at the end of the lane you are forced to cross the traffic lane to be on the right side again (at least for the European cyclists this is confusing). Nevertheless there are some spacious bike ‘highways’ on certain avenues and streets, especially in Manhattan and in Downtown Brooklyn and Park Slope. Cycling is an important part of the agenda of the NYC DOT, adding approx. 285 Miles of new cycling lanes and tripling the commute trips done by bike until 2017 (see here for more info)  and part of the DOT’s  strategic plan ‘Sustainable Streets‘ (PDF). Included in this plan is the implementation of a bike rental system called ‘Citi Bike‘ supposed to start in May 2013 with stations in Lower Manhattan up to Central Park, in the Brooklyn neighborhoods of Downtown Brooklyn, Fort Greene, Bed-Suy, Williamsburg and Greenpoint, and in Queens only in Long Island City. 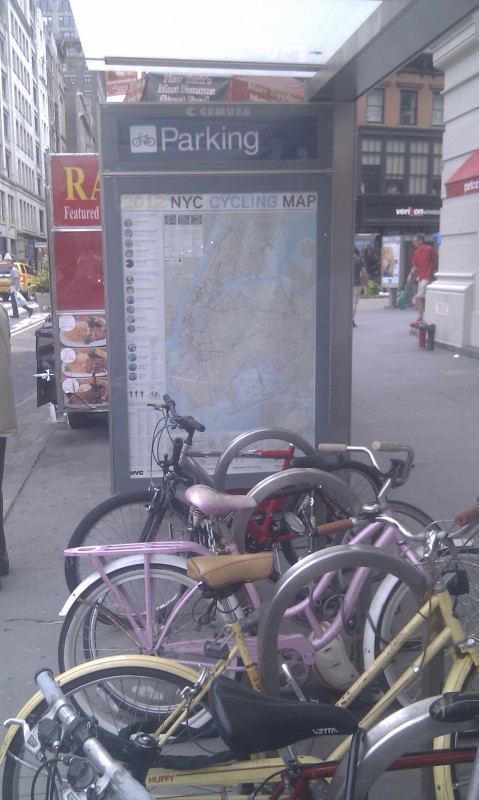 Generally, the bike seems to be a lifestyle object  to express a certain social status rather than being used as a means of transportation.  The bike as a status symbol is observable in the types of bicycles that are used: The amount of ‘fixies’ in fancy, flashy colors is especially in Williamsburg and the Lower East Side quite high, whereas mountain bikes seems to be more common in neighborhoods like Bushwick, where the bike seems to be an object for leisure activities rather than a status symbol or a means of transport. Even on the official bike map the importance of the bike as a lifestyle object is fostered in stating that “Helmets come in all fashions and colors. Find yours and ride in style!” (p.2, see here (PDF)). So, cycling in New York  seems to be all about style. If an activity is ‘style’, doesn’t this go along with an inherent moment of exclusivity? There might be groups that just to distinct themselves of the group that cycling might be associated with reject the activity of riding a bike thus limiting the potential of a successful implementation of a cycling policy. And a even more urgent question is: What happens when (life-)styles change and cycling is not part of a style anymore? Who is to cycle then?

Styles might change, but I don’t think we want that happening to cycling too if we are serious in implementing a sustainable transport policy in a city. So, where are you cycling, New York City?

For all the talk about protected bike lanes, the densest part of the city (Midtown) has nearly none. The 4 major protected lanes (1st Ave, 2nd Ave, 8th Ave, 9th Ave) all have gaps in places with significant automobile traffic. 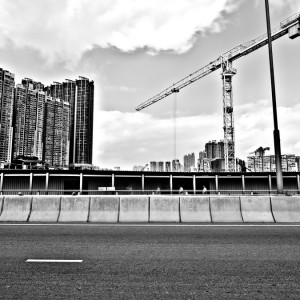 In a previous article of mine, I lauded Hong Kong's hyperdense architecture as an appropriate design strategy for the city's...
© 2012 - 2019 The Protocity.com. All rights reserved.
Back to top