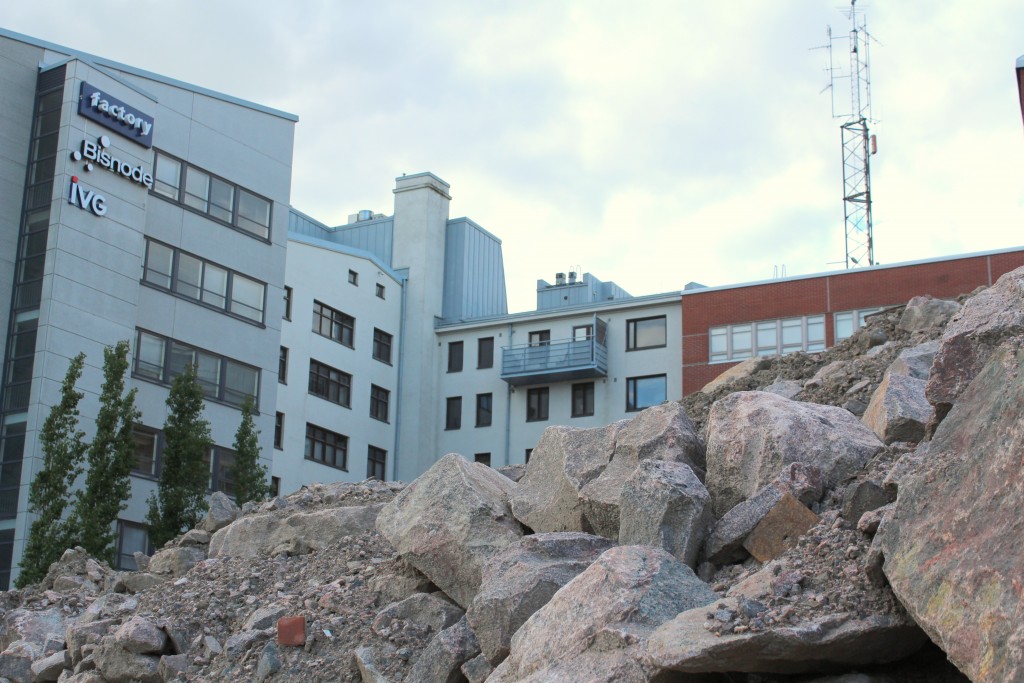 Helsinki is not a mega-city. Far from it: in early 2015, just over 620,000 people lived in the capital of Finland. That’s about 7% of the current population of London. Still, the population of Helsinki is growing fast – today’s population size already exceeds projections made as recently as 2012.

More people equals a need for more housing. Yet it’s widely recognised that Helsinki suffers, and has done so for years, from a chronic housing shortage, characterised by high rents and real estate prices. The less well-to-do are increasingly pushed out of the city centre, and previously relatively inexpensive areas in the eastern part of the city are rapidly gentrifiying.

One response to the housing shortage, as well as to a more general need to reduce the pressure on the city centre, is the development of Keski-Pasila (Central Pasila). Located almost directly north of the city centre, it spans an area along the railway tracks heading out of the city. Changes in the railway’s workings means around 18.3ha of land has been freed in the area, and is now under development to become a dense northern node for the city, combining work, service, and housing needs. Once complete, the the City of Helsinki projects the area will be home to over 5,000 people and up to 6,000 jobs (though another planning document by the City puts these numbers at 3,000 and and 10,000 respectively).

While densification of the city is good and necessary, not everyone has been happy with the plans for Keski-Pasila. Proposals to build several 20-40 floor high-rises have in particular criticised. A positive note however is that plans for Keski-Pasila recognise the area’s transportation history, and include the preservation of its old railway buildings.

Selkäranka is a group of urban planning activists working as part of the environmental organisation Dodo. Their particular focus is on the area around Teollisuuskatu, which runs from the new Kalasatama neighbourhood northeast to Keski-Pasila. A few weeks ago I did a walking tour with the group, looking at both existing buildings in the Teollisuuskatu vicinity and ongoing construction.

We started off on the infamous Vaasankatu in the Kallio neighbourhood. The area has been gentrifiying over the past few years, but despite the hip cafés and restaurants now dotting the street, scruffier elements still manage to co-exist. 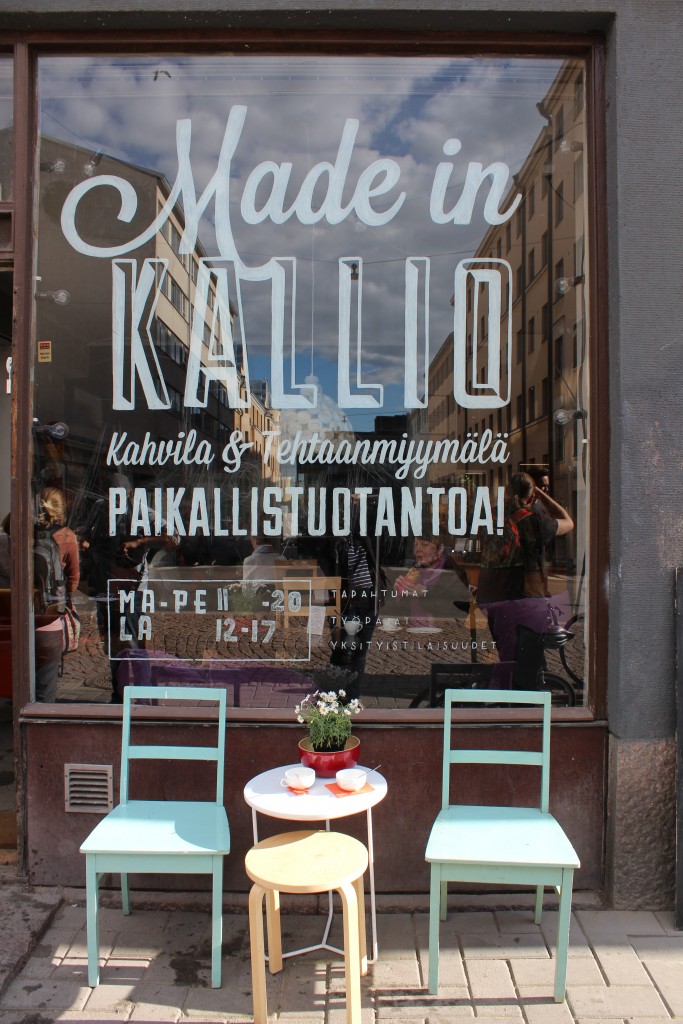 Our meeting up point was the Made in Kallio café, shop, and meeting space on Vaasankatu in Kallio. A relative newcomer to the street, it has a hipster-friendly vibe with mish-mash decor and regular community meetings. 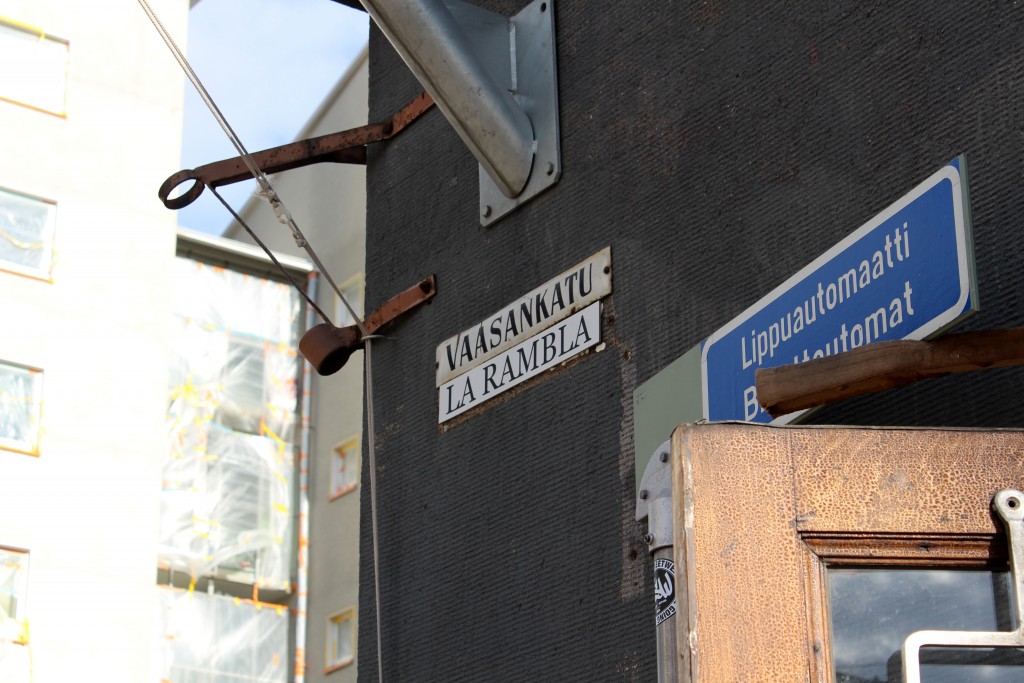 Someone thought themselves clever and replaced the Swedish street name with La Rambla. They have a point though, as Vaasankatu is (in)famously colourful. 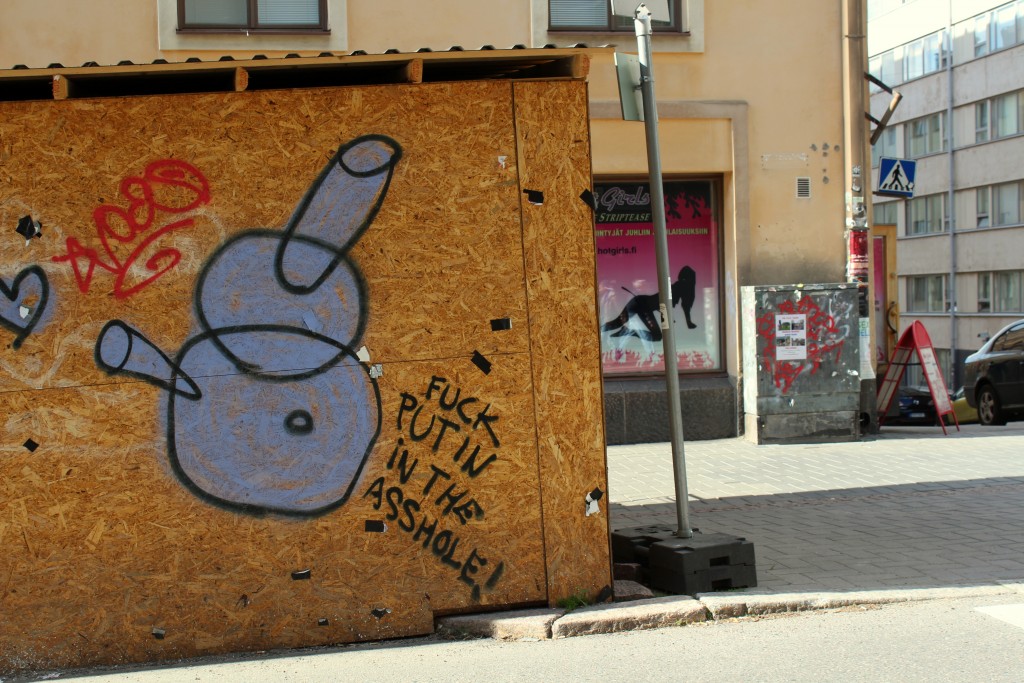 Although hip new bars and restaurants have opened on Vaasankatu over the past few years, sex shops and striptease joints persist. Along with graffiti.

Heading down to Teollisuuskatu, we passed the Dallapé Park, where the old mortuary is located. Nowadays, it houses a youth centre. 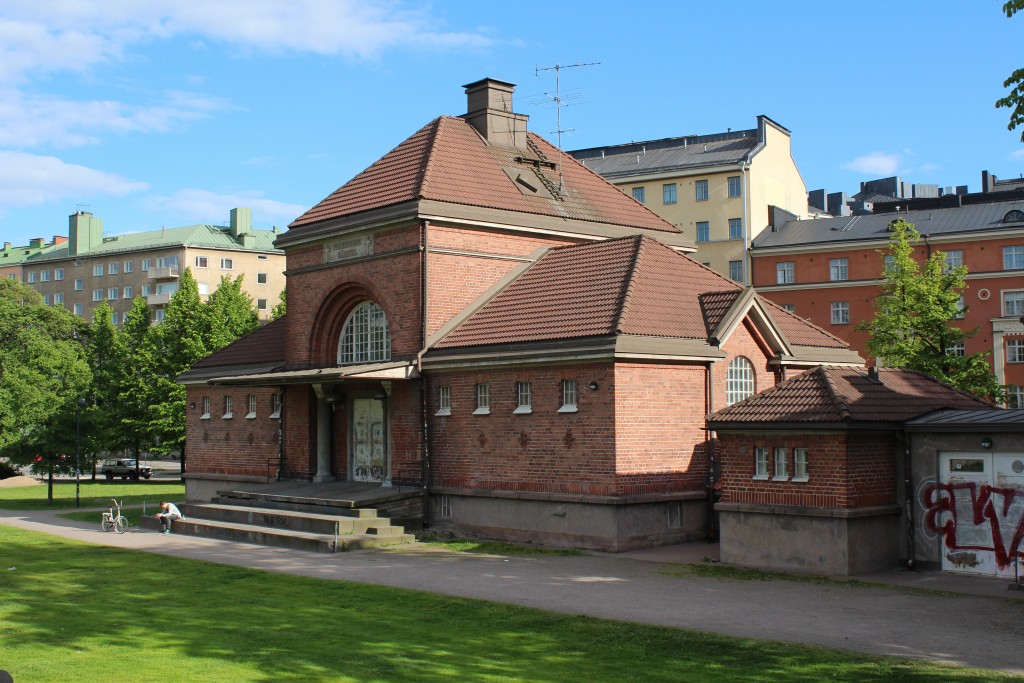 The old mortuary in the Dallapé Park.

Across the street from the old mortuary, the OP Bank has recently constructed a large office. The building is reminiscent of a ship in that it seems to simply rise from the ground and has no relationship with its surroundings. It’s asymmetrical lines made me feel sick just from looking at it. 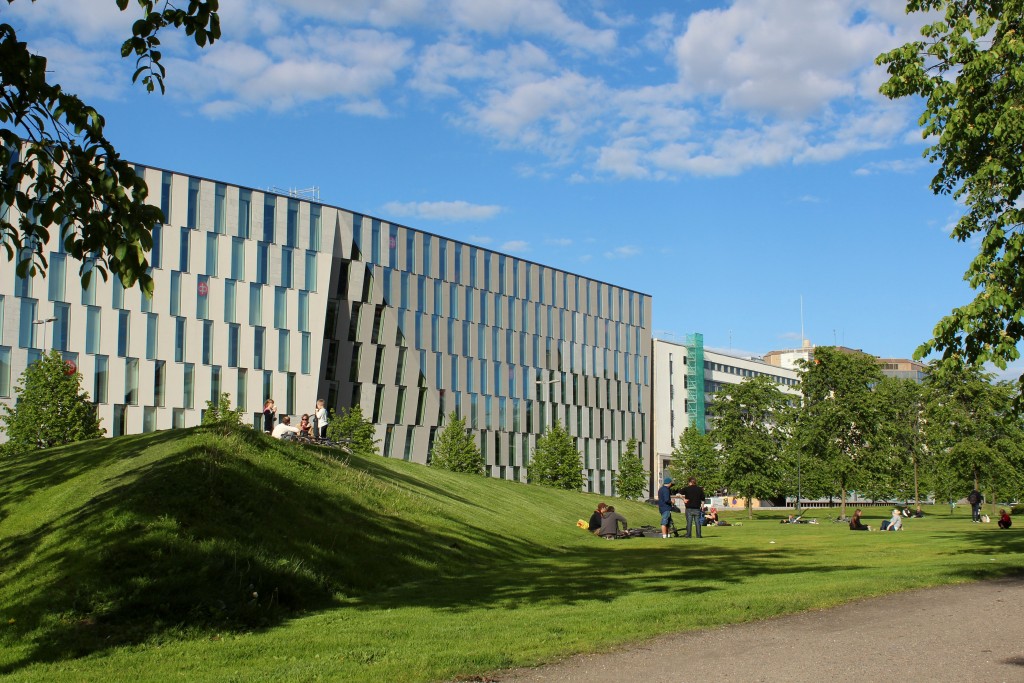 The OP Bank building seen from the Dallapé Park. 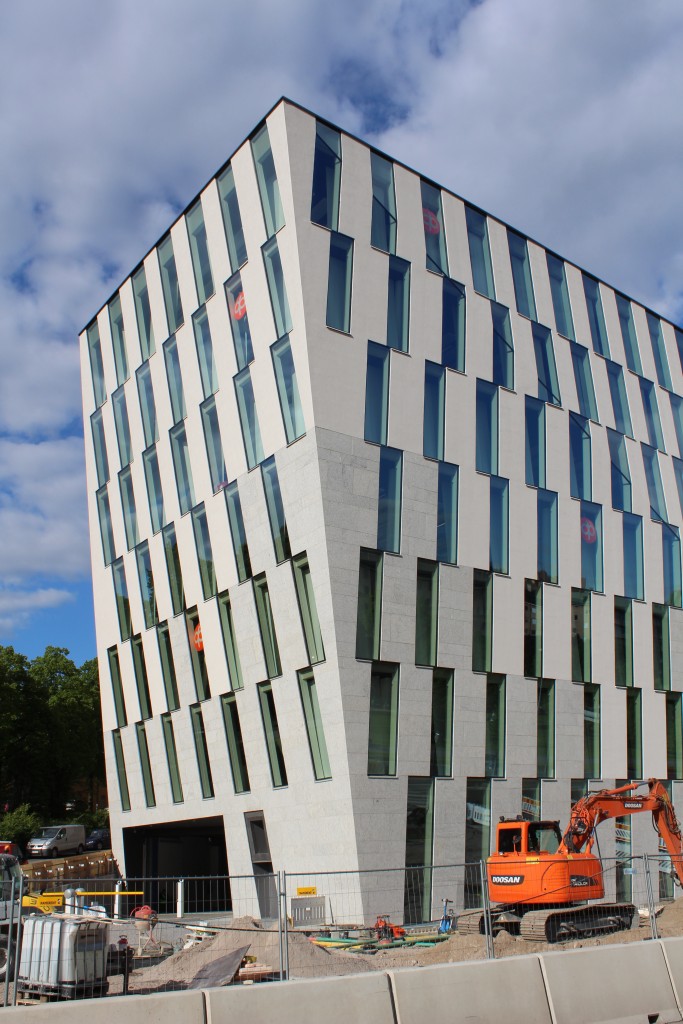 Some construction continues around the OP “ship”.

The adorable area of Puu-Vallila starts just behind the OP Ship. The houses were built for workers in the 1910s and 1920s. They faced demolition in the 70s as the city was growing, but resident action prevented the city from going ahead. To this day, and despite the area becoming increasingly sought after, many of the houses in Puu-Vallila are rented by the City of Helsinki to less wealthy residents. 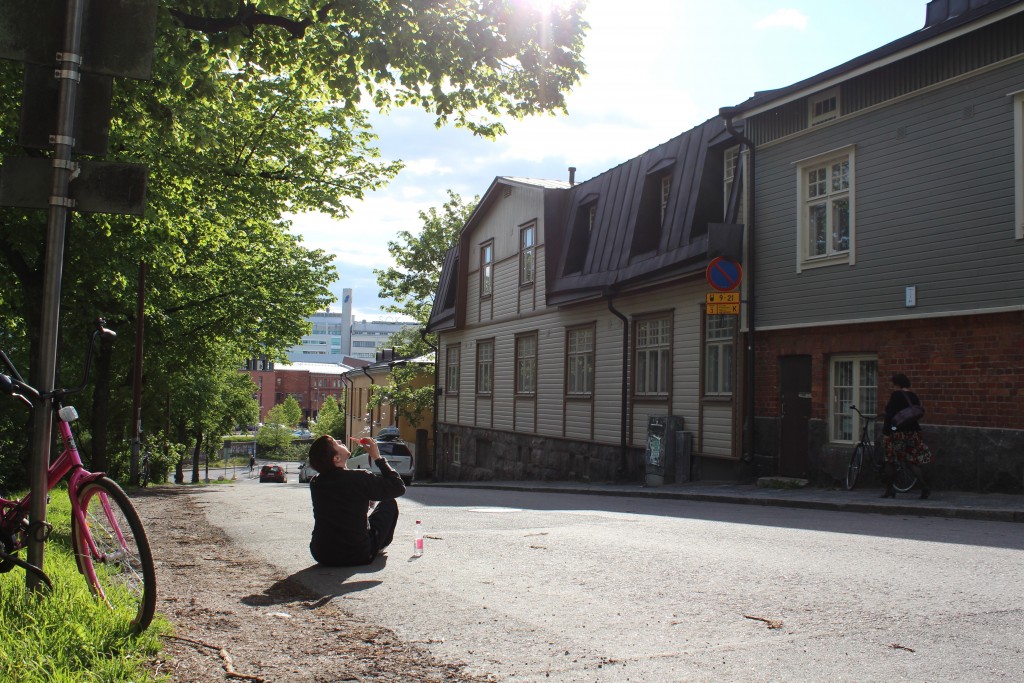 The Puu-Vallilla (Wood Vallila) area is a little oasis. 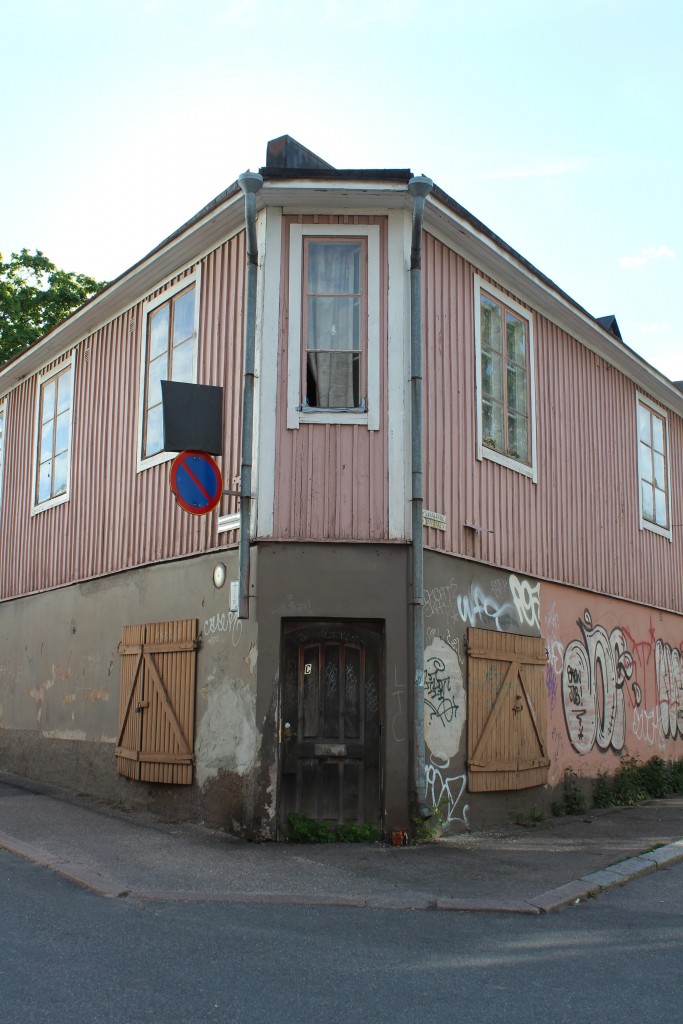 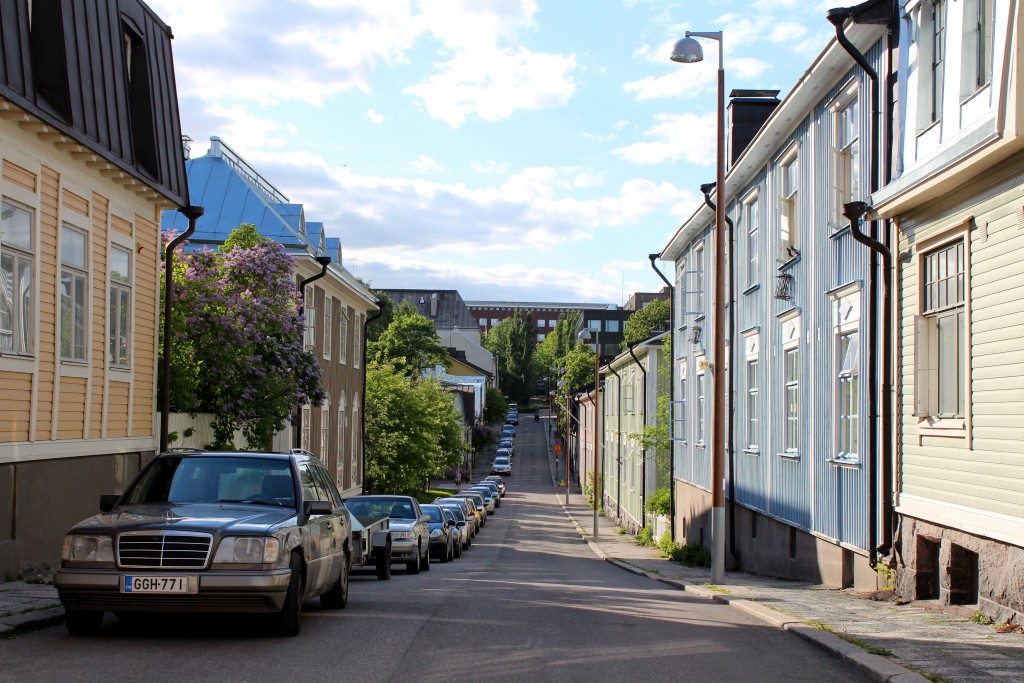 Heading east along Teollisuuskatu, we walked towards what will become the new Keski-Pasila neighbourhood. At the moment, it’s a combination of anonymous office buildings, beautiful old railway buildings put to distinctly sub-par use, and new construction. Unfortunately, the already completed apartment buildings left something to be desired in terms of creativity and design: the repetitiveness of the buildings with poorly thought out splashes of bright colours certainly left me cold. 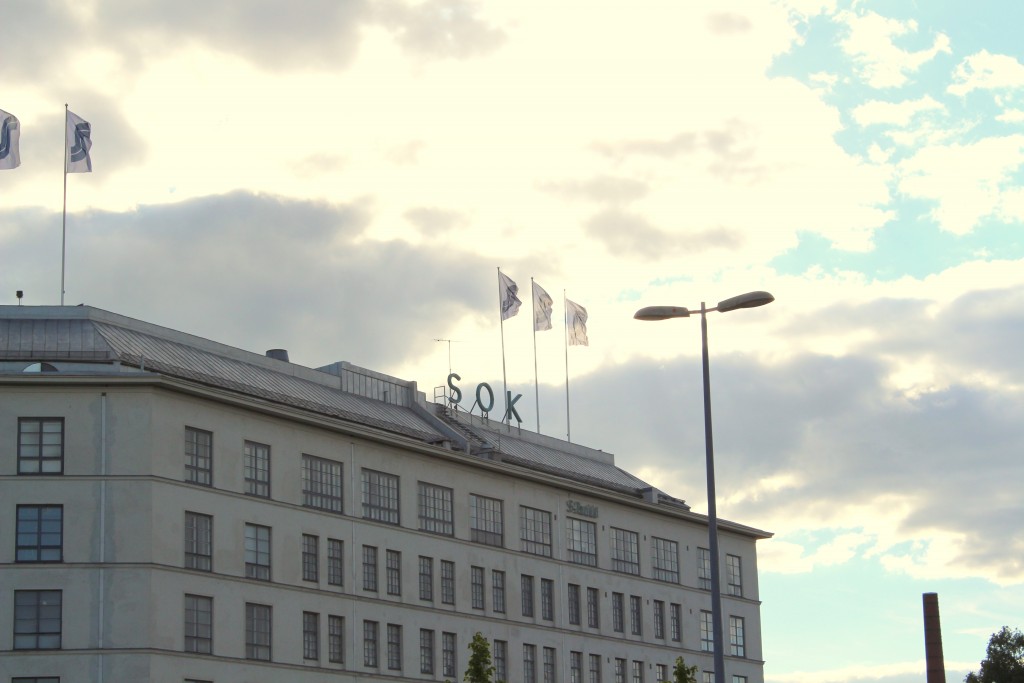 The Meira coffee roastery along Teollisuuskatu. You get a beautiful whiff of roasted coffee when you pass the building on foot or bicycle. 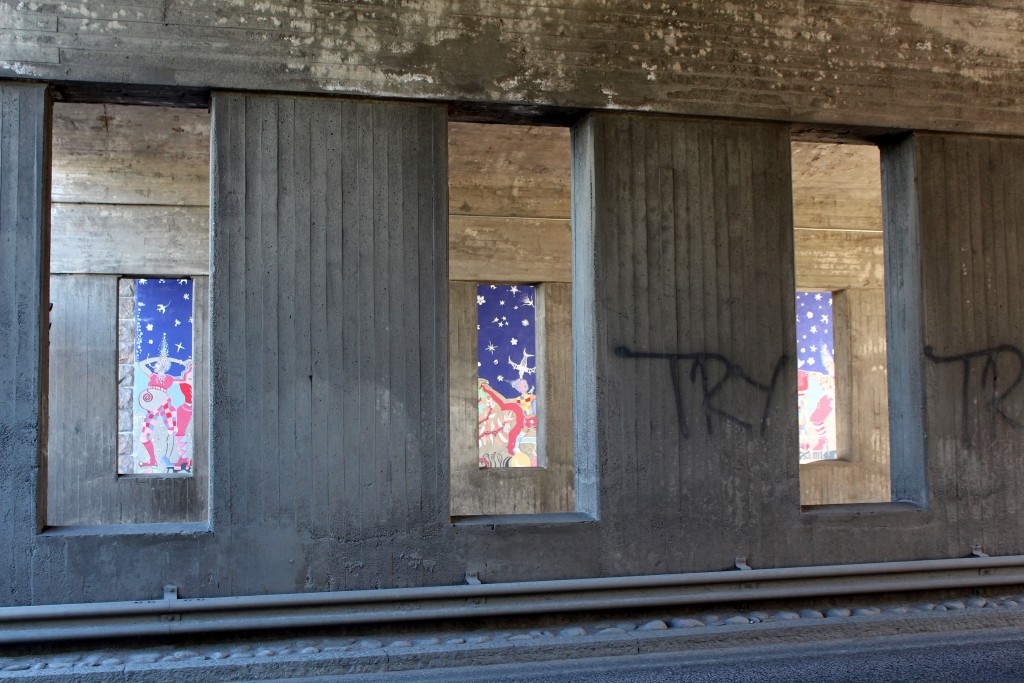 The underpass below Sturenkatu features some interesting wall art to brighten up the concrete. 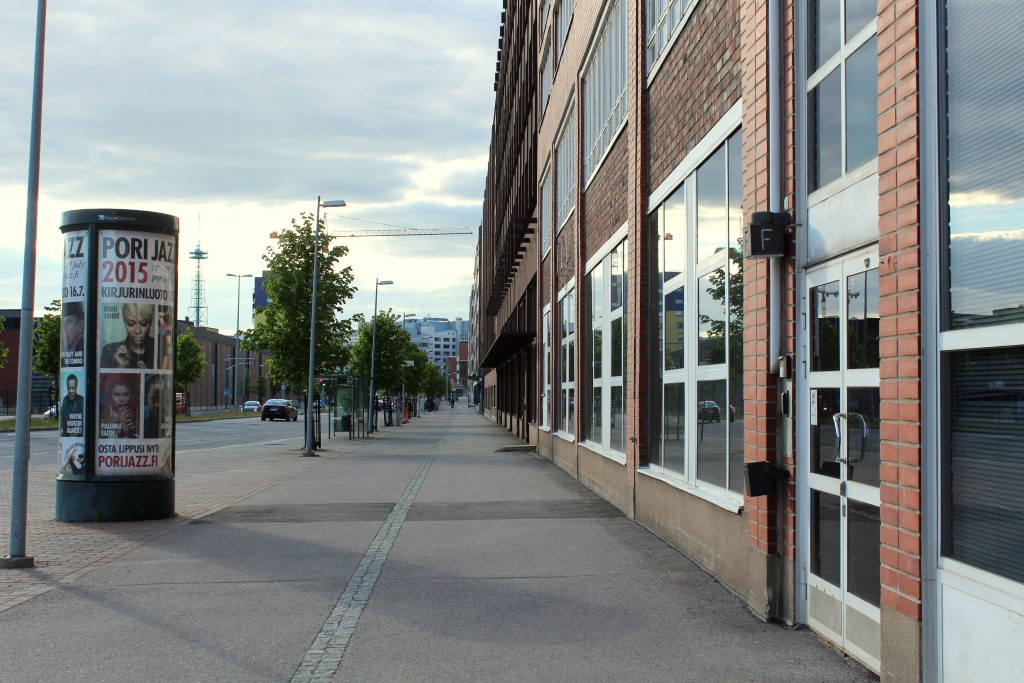 Teollisuuskatu heading to Pasila is dead. The office buildings on the right do not interact with the street at all, and the road to the left is busy with few zebra crossings. 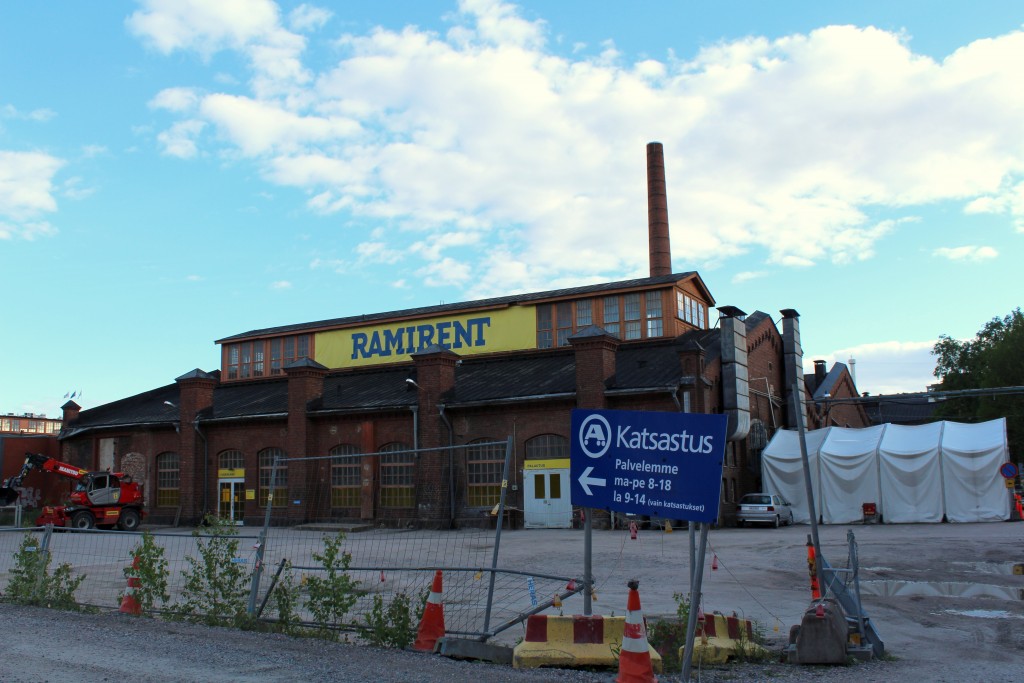 Opposite the office buildings are beautiful old industrial buildings as well as the former railway engineering works. It’s sad to see many of the buildings currently put to sub-par use. 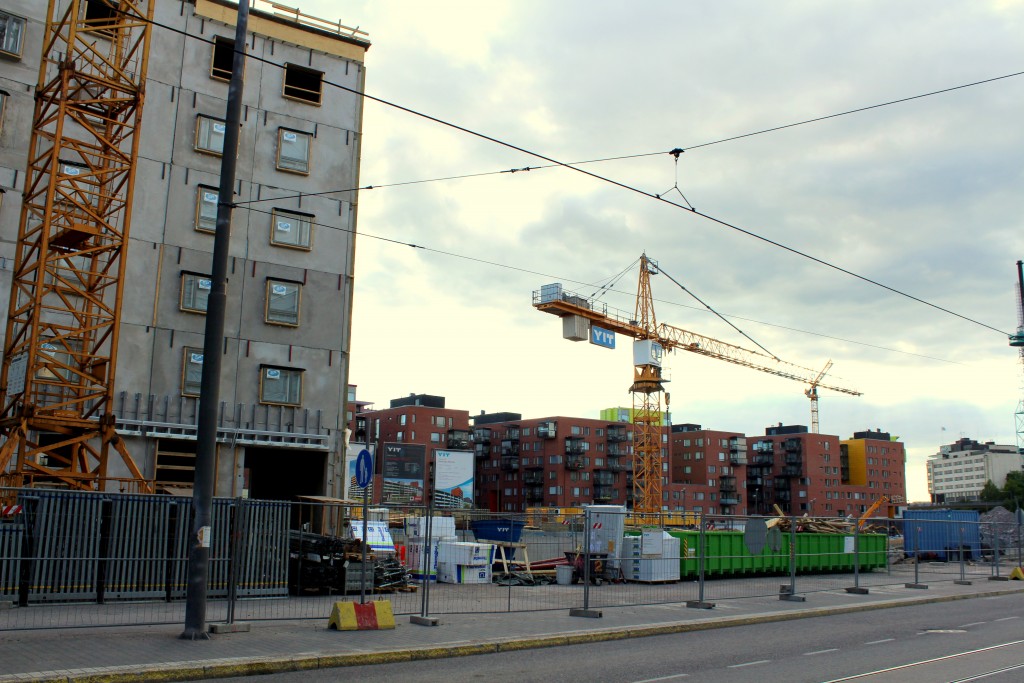 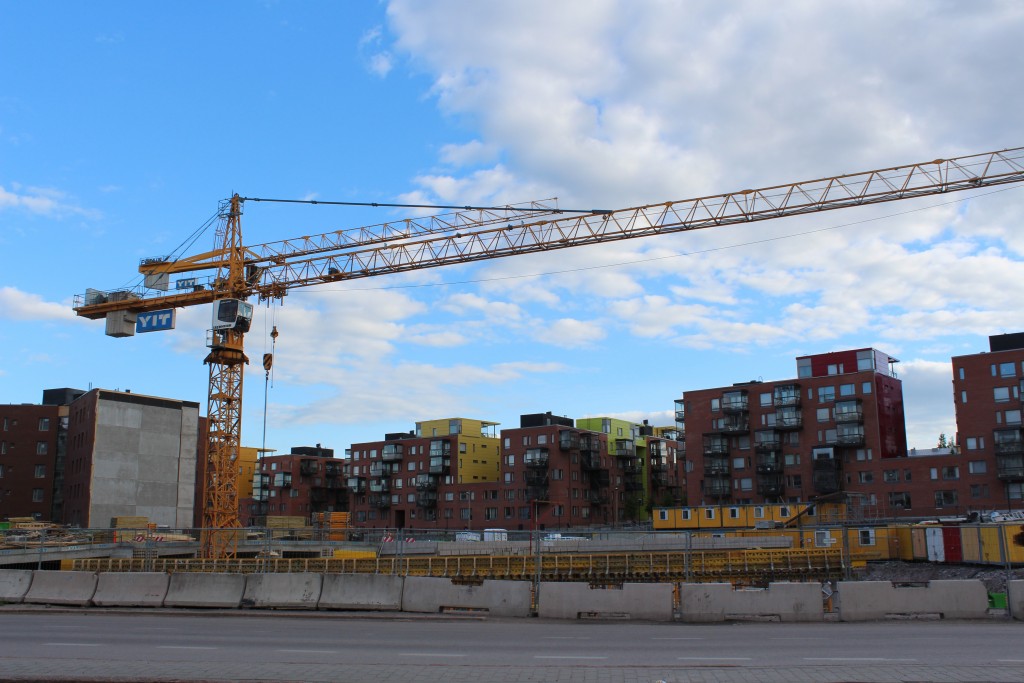 One of the larger already completed residential areas is boring in its repetitiveness and the splashes of colour here and there leave me cold.

What was nice to see however was that even though the area is currently a huge construction site, both animals and plants are making the presence felt amidst the concrete. 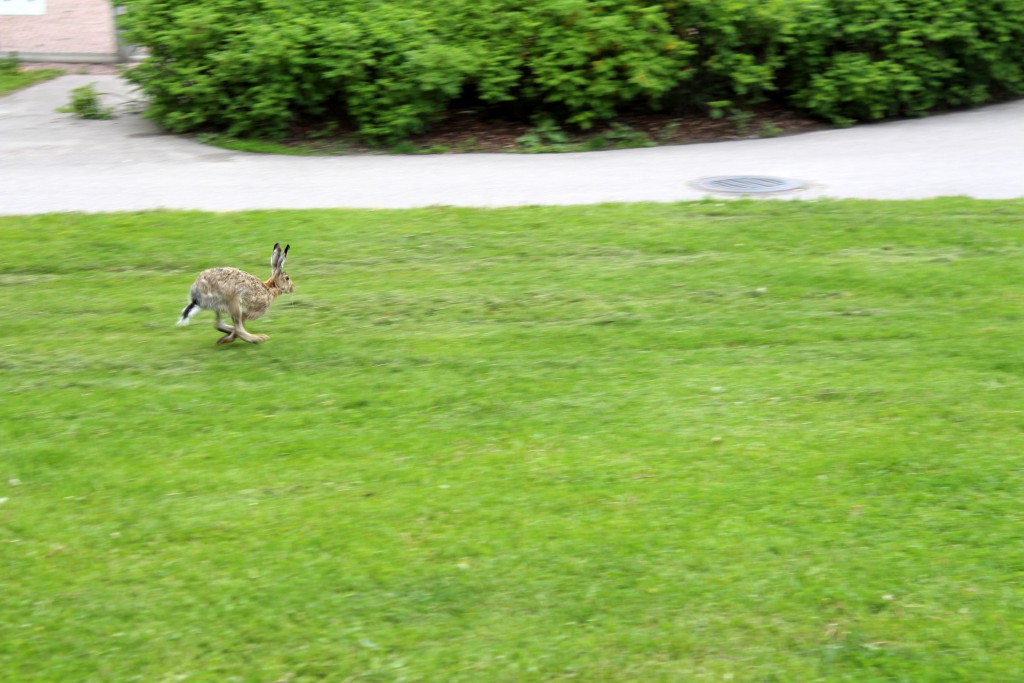 We saw two hares on our walk. 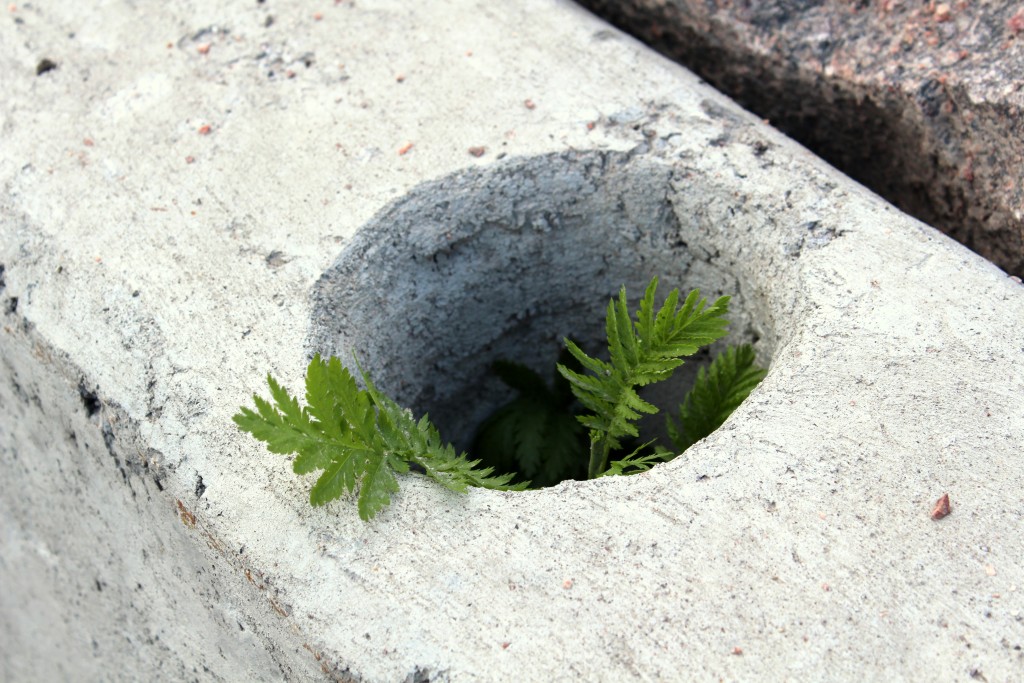 Greenery is also making its way through the concrete.

We completed our walk at Dodo’s offices by Pasila train station. The offices are located in the old railway roundhouse, and while it seems the building is included in the new plan, concerns remain regarding whether anything will remain of the area’s railway character when Keski-Pasila is set for completion in the 2020s. What’s certain is that it won’t look anything like it does today, which some don’t see as a bad thing – according to local politician Björn Månsson quoted in the Helsingin Sanomat newspaper, “Nothing can make Pasila worse than it is.” We’ll see. 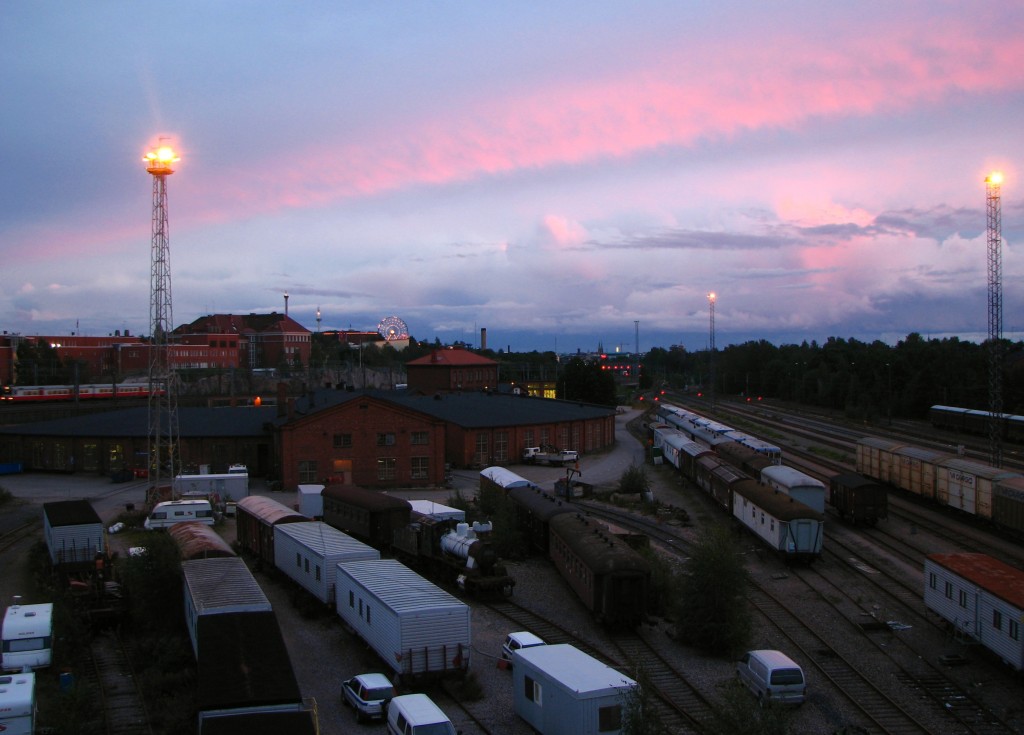 Nora Lindström (@urbanopolista) is interested in all things urban. She recently moved back to Helsinki, after spending eight years working on urban poverty and land rights issues in Cambodia and Malawi. She is currently doing a PhD at the University of Helsinki, with a focus on the underestimation of urban poverty in Lilongwe, Malawi. She spends her spare time trying to keep her plants alive and blogging at urbanopolista.com and returntohel.com.
http://urbanopolista.wordpress.com/

Very nice article Nora! I shared it on our Helsinki Facebook page. I think you might like what we’re doing with Spotted by Locals Helsinki (http://www.spottedbylocals.com/helsinki/). We’re always looking for more city loving locals 🙂 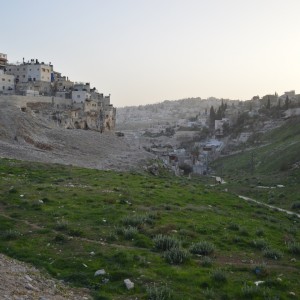 The Jerusalem Master plan 2000 is the first urban planning project for Jerusalem that covers both the Israeli west and the Palestinian...
© 2012 - 2019 The Protocity.com. All rights reserved.
Back to top