Neglecting a city’s potential: Jakarta as a future urban paradise?

Indonesia’s capital city, Jakarta, is often being regarded as an extremely busy, dirty and unattractive place. How could it happen that within a couple of decades, the once-modest city is now completely bursting out at the seams? And is there any hope that this tide will be turned?

Jakarta, the massive capital of Indonesia, is not often recommended by travel guides. According to Lonely Planet, Jakarta is a ‘hard city to love,’ because of its extreme traffic congestion, pollution, and perhaps because of the fact that, due to rapid urbanisation, Jakarta has been growing extensively during the past few decades, and generally not in the most attractive way. Hence, Jakarta does not meet as many tourist visitors as other South-East Asian capitals as Kuala Lumpur, Bangkok or Hanoi. Although I would be the last person who would deny the massive problems the city is currently facing, Jakarta has some still unplayed trumps.

Although I do not want to expatiate too much on Jakarta’s traffic problems, it is impossible to ignore it when writing a piece about the city’s main challenges. Since Jakarta does not consist of narrow roads, many streets are at least five lanes wide. The problem here though is that, to put it mildly, the traffic discipline of the average Indonesian driver leaves much to be desired, often resulting in the surreal situation that six cars are positioned next to each other (on five lanes!), while the many motorbikes are forced to use the sidewalk, where pedestrians need to possess decent dodging skills.

Quite a bizarre but common phenomenon in Jakarta is that people are actually earning money by making inserting possible for cars, just by jumping on a busy street trying to stop all the approaching traffic. Oxford road in Manchester or Vienna as it used to be can probably be described as paradises for bicyclists compared to the average road in Jakarta: even the most fanatic promoter of urban cycling would probably think twice before jumping on a bike here, at least if your life is worth anything to you. Perhaps the most spectacular and impressive way to experience this urban jungle of traffic is in a characteristic ‘Bajaj.’ 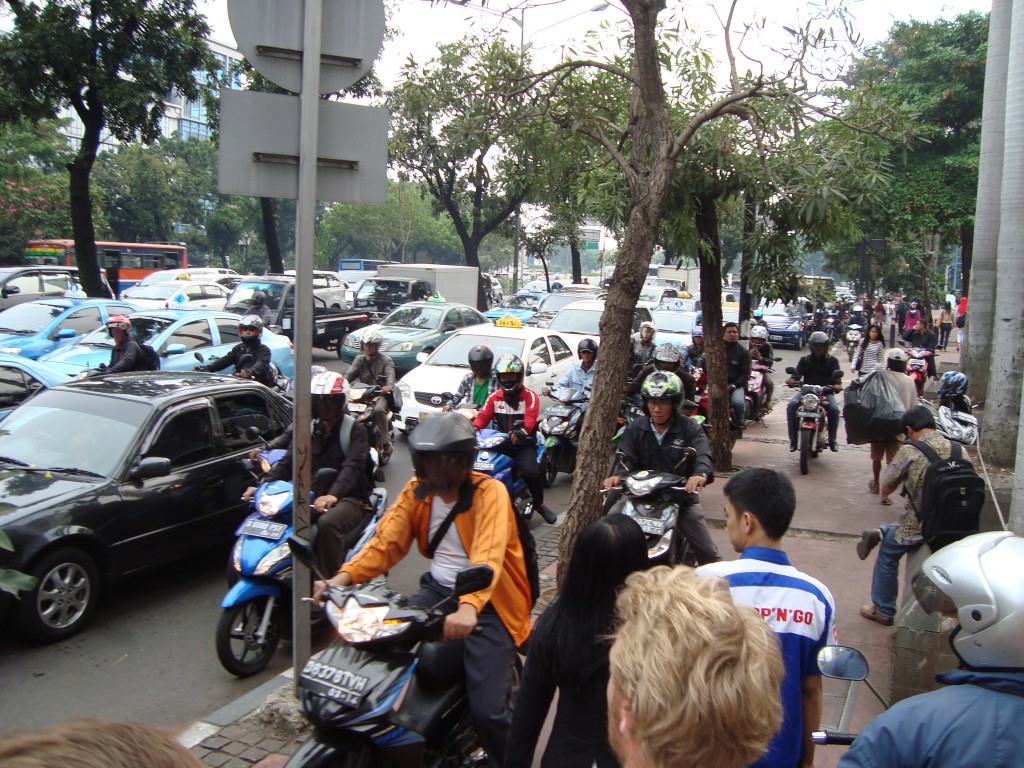 Remarkably, those situations do not only happen to occur during rush hours, but also at 11:30am or even pm at just random weekdays or weekends. It is not that hard to imagine many potential problems that are caused by this congestion, not at last when you think of emergency services.

The harder task is to think about the possible solutions. I am not quite specialised in solving infrastructural problems of this size, but I am sure a reorganisation of the current roads should belong to the possibilities (more one-way roads perhaps?). Besides that, it is quite tempting to think that a metro system would be a great contribution, since Jakarta actually is the largest city in the world without one, and since the Indonesian economy has been doing quite well recently. Other ideas that quickly come to mind are to just re-educate Indonesian motorists, either by obliging more decent courses in order to get a license, or, and it hurts a bit to actually write it, more (honest) police controls. The fact is that Jakarta definitely needs to come up with some sort of solution in order to make the city a more attractive place, both to live in as to visit, in the future.

Probably almost everyone who visits this blog is at least a bit familiar with the concept of gentrification. The concept is always causing quite a lot of discussion amongst many different stakeholders: on the one hand, it is regarded as a nice way to make old, expired neighbourhoods attractive again, which can give a positive ‘boost’ to a city as a whole, while on the other hand one could question about justice and the fate of the ‘old residents’; who’s right is it to decide a particular area needs to be gentrified? A fact is that those processes currently take place quite a lot in European as well as in North-American cities, and since a couple of years the phenomenon also started to blow over to some cities in Asia.

In Indonesia, and particularly in Jakarta, as a result of economic growth and modernisation processes obviously a new financial elite emerged, which radically breaks with the past and with the community-sensed culture which is still present in large parts of the country. Where in the outskirts of the city many urban dwellers are still meeting each other at the small food stalls along the street to eat their ‘bakso’ and ‘nasi goreng’ while discussing their daily concerns, the urban elite seems to become more and more individualistic, after their Western counterparts. This latter fact is expressed by gentrification processes which would probably be regarded as being wrong by most Dutch urban scholars. As it can be read here and here, the Jakarta Post already wrote about gated communities which are appearing a lot and about the rights and socioeconomic interests of the city’s poor, which are completely ignored in these projects. 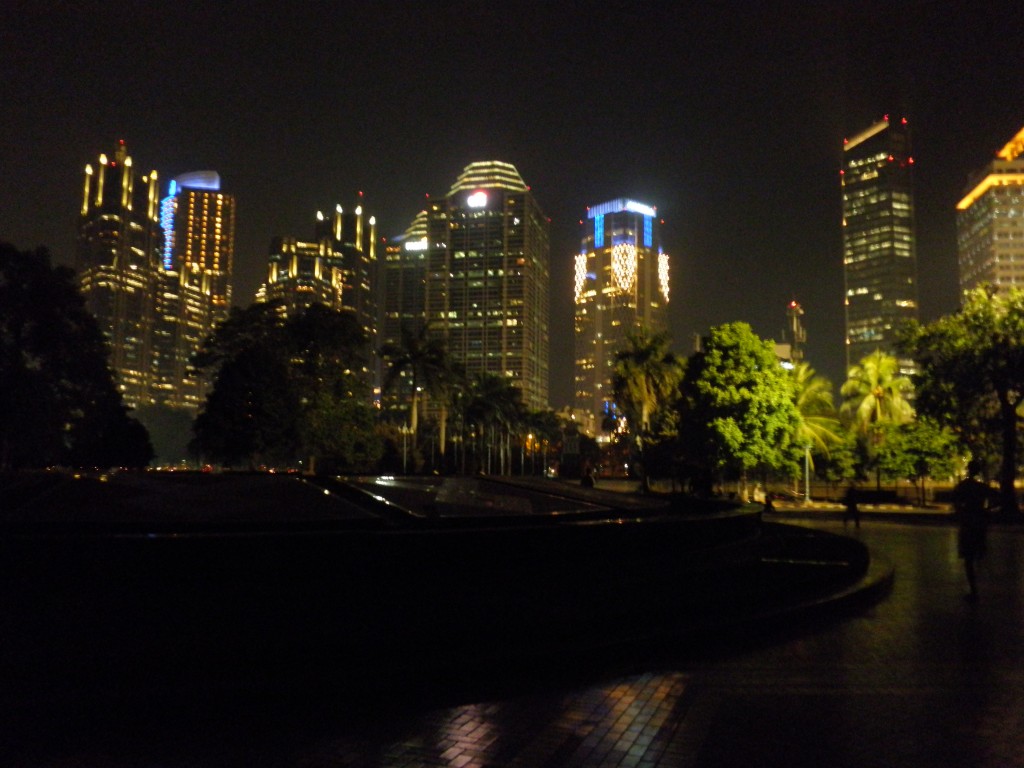 The financial business district of Jakarta, picture take by author

At the same time, the old colonial part of the city which dates back from the VOC, now called ‘Kota’, could count as an interesting sight for tourists, as well as a high valued historic living area, but unfortunately at the moment the place looks like a rubbish dump rather than as an attractive area with colonial grandeur and with quality facilities. Wandering around along the former Dutch canal, a sharp eye might still discover some of the aesthetics of the decayed canal houses from which one has a view on the 17th century bridge which is almost an exact copy of the beloved skinny bridge in Amsterdam. At the same time, though, the putrid smell is impossible to ignore, and the quays of the canal are dominated by homeless people which are sleeping off their drunkenness. Furthermore, one could find some other old colonial heritages in the area like a former VOC store centre, a watchtower, an old square including the old government building and a couple of other buildings, of which some are still in quite a decent state actually. 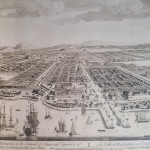 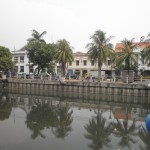 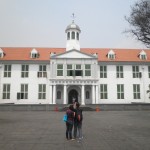 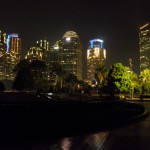 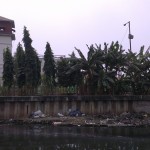 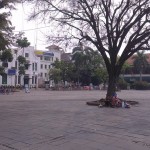 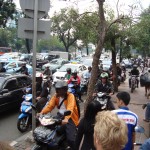 The main question that comes to mind here is whether this area still has the potential to become a popular and vibrant residential area as well as a popular tourist destination. Does the Jakarta elite actually wants to live in a historical colonial area, or do they prefer modern high-rise apartment towers which might give them more status in the current era of modernisation processes? And is it a realistic ideal to renovate the old colonial buildings, or is the area too much in decline already? Fact is that it would be a large challenge, and besides many rupiahs, much courage is needed in order to invest in this part of the city. On the other hand, at first sight not that many current residents will be harmed by a possible gentrification project, and it can definitely contribute to the improvement of the image of the city as a whole. Once again though, all of this again is inextricably linked to the traffic-related problems. Since the old ‘Kota’ is about 10 kilometres away from the central business district, it takes at least 30 minutes to reach it, and even longer if you don’t take the toll road. Perhaps the brave investor who dares to tackle this project has to know someone who can force a start with building the new metro system?

Although Jakarta might still not sound as a very attractive place to live, the city has great potential. Opposite of its major problems are, as far as I believe, major opportunities. Instead of building decadent, megalomaniac shopping malls that all look alike, the city should try to invest in radically tackling its traffic problems and to encourage gentrification in a more honest and positive way. Then, the city could benefit from its location, since it is located attractively close to the sea (frequent floods, another of Jakarta’s problems, should moreover be addressed as well) and the ‘1000 islands’. Furthermore, due to cheap and quick flights financial centres as Bangkok, Kuala Lumpur and Singapore are very near by, while attractive leisure destinations as Bali and a couple of Malaysian bounty-islands are very easily reached as well. Time will tell whether or not there will be enough money and willingness in the near future to exploit this profound potential.

Great read Jorn! The pictures make the true story of Jakarta even more vivid and lively. After reading your blogpost, I came across an article about the middle class in jakarta in connection to the consumption of bicycles: http://www.bbc.co.uk/news/business-15809355. I’d say it’s a complimentary read to what you are mentioning. 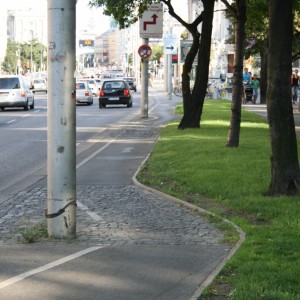 Cycling in Vienna: Getting less suicidal Most of us agree that Vienna is notoriously famous for things like Würstelstand,...
© 2012 - 2019 The Protocity.com. All rights reserved.
Back to top