Dubai, the modern city with pure luxury and extravagant lifestyle translated into big steel and glass buildings. The Burj Khalifa and the Burj al-Arab are some of the pearls whereby Dubai is showcasing its fortune of being situated within a hot spring full of oil. Because of this, people see the city as a shallow urban area, totally disconnected from its past and its environment.

‘Dubai has no culture’.

Well, Dubai’s entrepreneurs responded to that agitation. Sheikh Mohammed founded the Sheikh Mohammed Centre for Cultural Understanding in 1995. This organisation is to build bridges between cultures and to help expats understand the norms and values of the true Emirates.

But what is true Emirates actually? Where can I find it in the Arab city? In the view of the Sheikh’s organisation, Dubai’s culture lays in the past (how surprising) and for that reason, old centres need to be preserved or, if not existent, be built up as it from scratch. 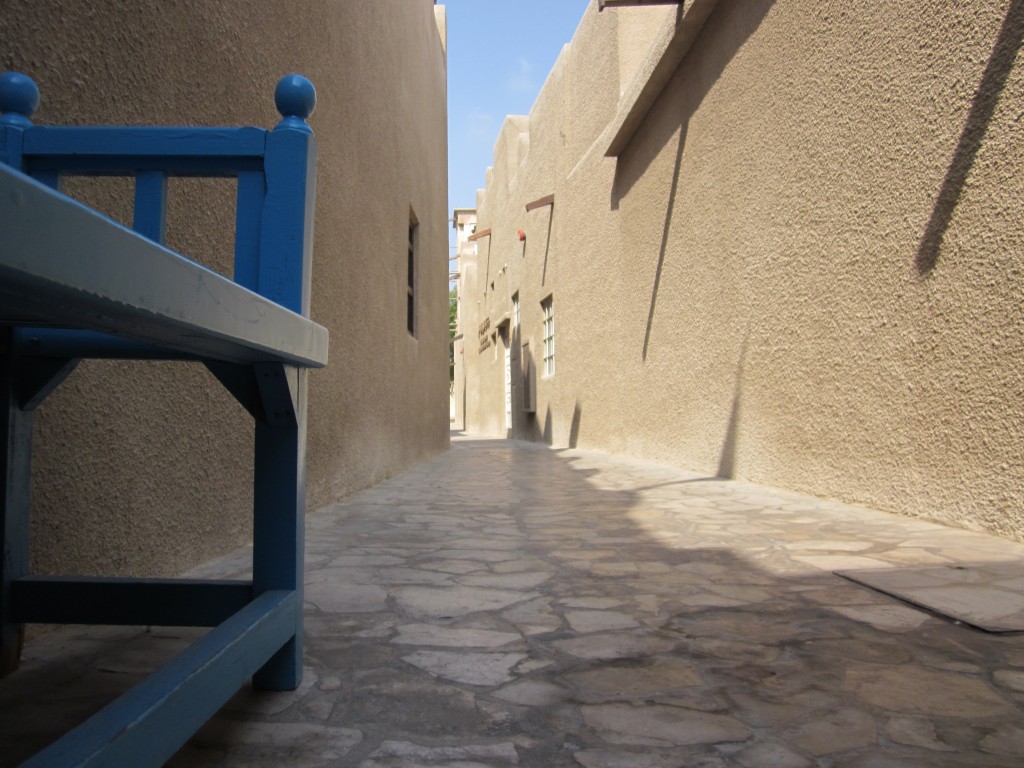 This happened to the place I am writing this article: Bastakiya Quarter. Dubai’s Old City Centre, when it was nothing but a place where people were diving up pearls in the Arab Gulf (internationally known as the Persian Gulf, but Emiratis can be quite sensitive about the name-calling). Totally renovated and rehabilitated in the late-20th century, with maybe the entering of the renowned Majlis Gallery in the 1970s as the crucial trigger. 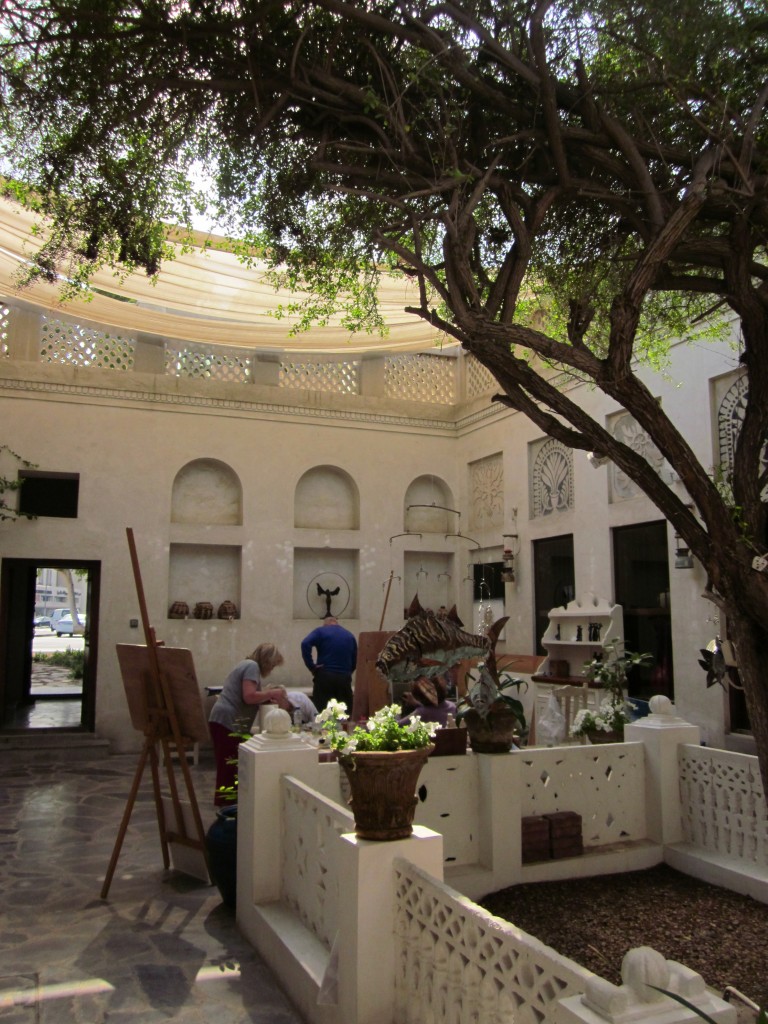 And to be honest, it is a great place. It is clean. It is aesthetically beautiful. There are nice galleries to wander in or get a workshop in painting, the streetscape is fabulous, and it feels like a little labyrinth where you can get lost and find your own wonderful niche in terms of a nice bar, some local food provided by cultural organisations, or you can buy a marvellous yield after entering one of the magnificent courtyard houses. Well, the pictures should give you an idea.

But all this beauty, all the cleanliness, all the proliferation of Dubai’s cultural heritage seems too good to be true. And to be really frank, it is. Although beautiful, the Bastakiya Quarter in my view is nothing more than a romanticisation of the past without having a solid connection to the real city of the present. 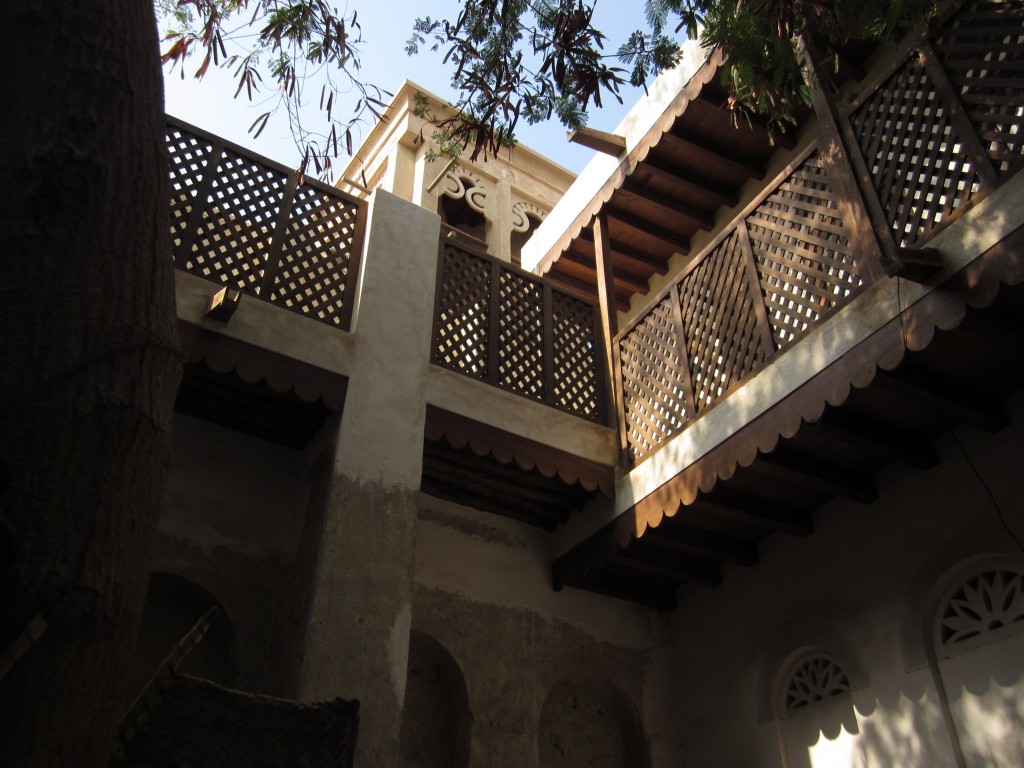 One example of the ‘too-good-to-be-trueness’ lays in the fact that the streets are clean, and that there are hardly any people on them except the area’s guards, monitoring the quarter. It is sort of a drawback that the only people on the streets are some guards. And what makes a city and a culturally attractive area? That’s right: people do.

It seems Bastakiya is not able to attract people other than tourists. And that is what is at the moment: tourists wanting to see their romanticised view of how an Arab city should have looked like, with all the contemporary pleasures an international city has to bring: galleries, ‘local’ bars, and the like. And expats living that dream: painting and drinking Emirati drinks. 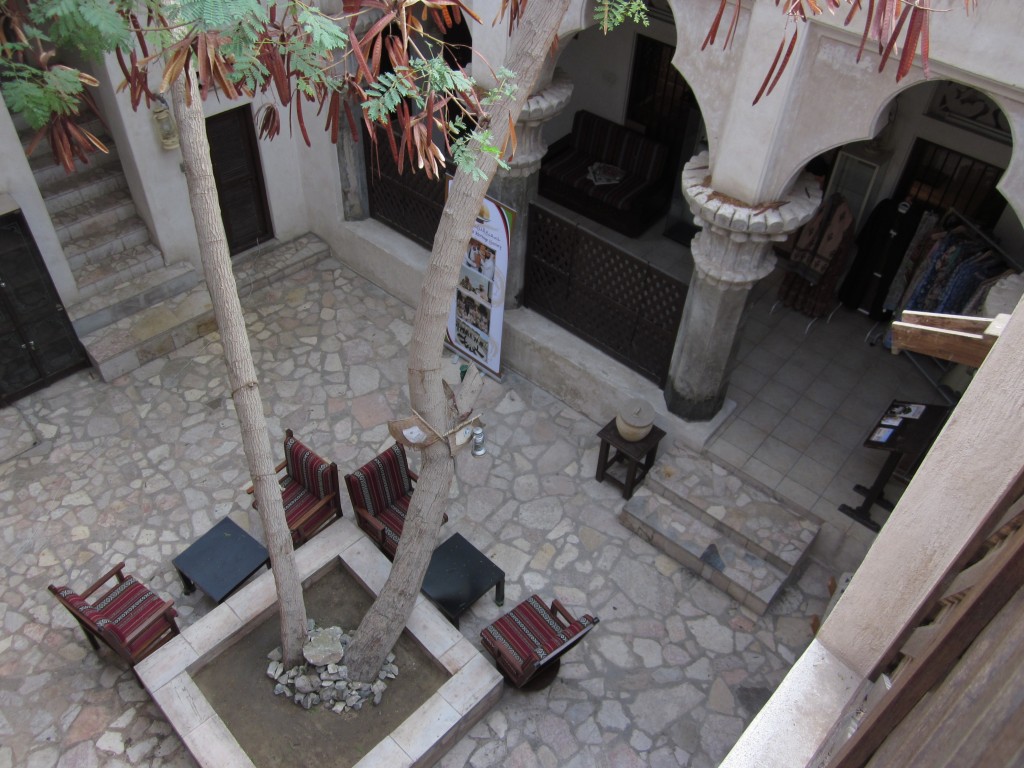 Seats to be occupied

No, Bastakiya is not real. It is cultural preservation of the Disney kind. A great area to walk around in and enjoy the enclosedness of non-traffic labyrinth-like streets, but without a real soul: the people of Dubai.

You do not hear me saying that you should not go there. No, I would recommend you to. But if you want to see the real streets of Dubai, apart from the stupendous high-rise buildings in New Dubai and Jumeirah, there is only one space which will fulfil these needs, and if you know the city in any way, it should not come as a surprise. 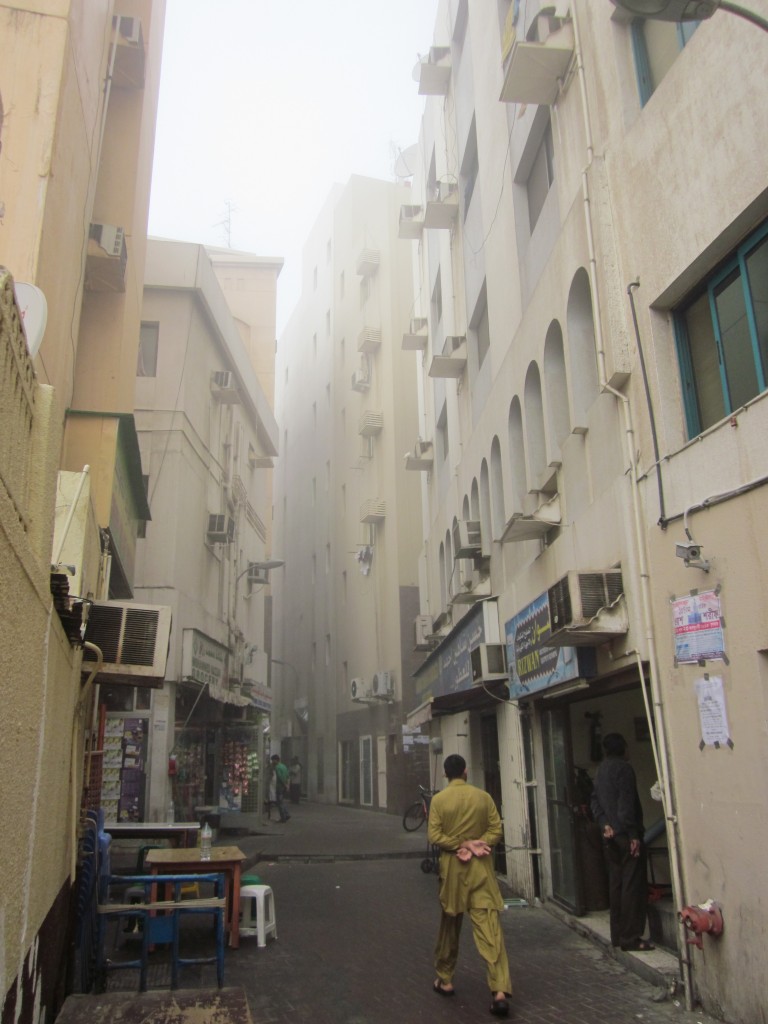 Deira: Where Dubai is real

You should go to Deira, where streets are dirty, where Emirati people walk, eat and spend their time. Where Dubai is real. 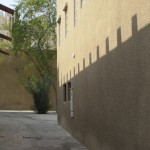 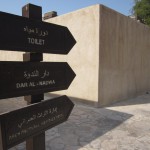 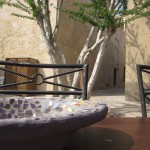 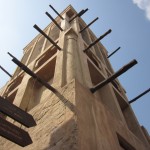 I think a lot has been said about how inauthentic about Dubai’s starchitectural skyline and obsession with luxury. But this is quite interesting because it shows that the city’s forced urban inauthenticity has trickled down to even small-scale tourism-oriented parts of the built environment.

Speaking of this authenticity, what of it in Deira? What can you say on this neighbourhood?

I am wondering why the skyline of Dubai is considered less ‘authentic’ than any other skyline in the Middle East, Asia or even Europe? If we take the rather dull discussions on ‘authenticity’ really that serious than skylines would only be authentic in cities like New York or Chicago, and cities in Europe would be doomed to avoid skyscrapers…
Instead I am asking if the skyline of Dubai isn’t very ‘authentic’ for the changes and the growing amount of money that global capitalism has accumulated? Which in turn leads to the question if there is any answer to this normative question of ‘what is authenticity?’.

I can’t speak for Dubai, but I can speak for Shenzhen, which is another city that is rapidly growing and gaining in global importance: Skyscrapers are built because it makes these cities feel like they’ve ‘arrived’ on the global scene. It’s complete superficiality for the sake of domestic status.

That said, I love skyscrapers. It’s a guilty pleasure.

I have also visited Dubai and stayed around the Deira area. In my opinion, the neighbourhood carries a sense of authenticity about the city in terms of its diversity and how it reflects Dubai today. There are many souqs (markets) and local eating places which reflect the origins of citizens in the area. ‘Emiratis’ apparently only make up a small percentage of the population, so many places tailor to the immigrant population (many of whom are guest workers, particularly from the nearby countries, indian subcontinent etc).

Deira also lies close to Dubai Creek, where taking an abra (boat) ride from one side to the other. This gives the impression of where the old meets the new. I guess Deira is older than most other things in Dubai, which gives off greater authenticity than other things in Dubai. Its important to keep in mind some things are old by Dubai standards, as 50 + years ago there was nothing in many parts of what is now Dubai, only desert !!

Very interesting read, Leon. As a Persian, however, I can’t help but shame you for referring to the gulf as “Arab Gulf”. Knowing me you’d be sure that I find the tired nationalist feud that has been going on for years in the region idiotic, but neither am I thrilled by the fact that Emiratis are so tenaciously pushing for or rather paying for the Persian gulf to be renamed to Arab gulf in aims of improving their global competitive status.

Ah, geopolitics. You could be Norway, or you could be the Emirates. It’s amazing how differently two countries can manage their resource wealth. 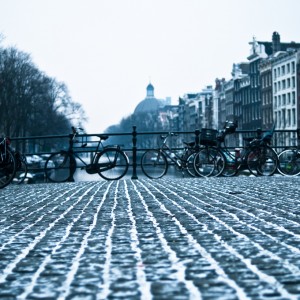 Usually, I am not a big fan of book reviews. They take away the pleasure of your own interpretation, they give away all the clues...
© 2012 - 2019 The Protocity.com. All rights reserved.
Back to top