Downtowns all over the world are dead zones on nights and weekends.

Once 5:00 p.m. hits on a given weekday, a rush of upper middle class suits and khakis clamor from office towers to the nearest transportation hubs, catching express subways and trains to surrounding residential districts and neighboring suburbs. From this time on, the business district empties, as businessman-catering storefronts, cafes, coffee shops, and restaurants close (whose workers also retreat to their respective residential districts). What follows from early evening through night, aside from a few “happy hour” hotspots, may all too often be an abandoned central city district reflecting images of a post-industrial decline – made all the more eerie by shadows of modern skyscrapers looming over empty streets.

Global cities are not immune and are in fact the most implicated in this phenomenon. New York’s financial district, though at the lower tip of the notoriously nocturnal Manhattan, becomes quiet and dark as the evening creeps on. Sydney’s CBD, while surrounded by historic neighborhoods and breathtaking public spaces like the Opera House, Hyde Park, and Harbour Bridge, is littered with dark food shops beginning as early as 4 o’clock on many afternoons; boisterous lunchtime gatherings are long over and service workers quickly wipe tables and counters before exiting the premises.

Such is a consequence of business districts whose primary purpose is to concentrate large companies and firms and cater to their schedules. When the workday ends, the district ceases to exist. While convenient for workers, this results in dead zones at the heart of otherwise vibrant cities. An empty city district is an unattractive one, and, more importantly, a poor use of centralized urban space. How can a major city’s business district play host to a collective of professional activities while also maintaining street life beyond working hours?

Chicago provides some answers. The Windy City experiences some of the dead zone effects in its business district – known as the Loop – but counters these characteristics with the help of a multifaceted transportation network and strategically-located major attractions.

Situated within the Loop are Millennium Park and Grant Park, magnificent lakefront green spaces that are both tourist attractions and local favorites. Millennium Park contains the social media-famous Bean – notorious among visitors to the city as a must-have selfie. Just next door is the Jay Pritzker Pavilion, providing nightly concerts and weekend afternoon events of all kinds. Locals from each corner of the sprawling metropolitan region travel downtown to lie in the grass and bask in Lake Michigan breezes and skyline vistas. 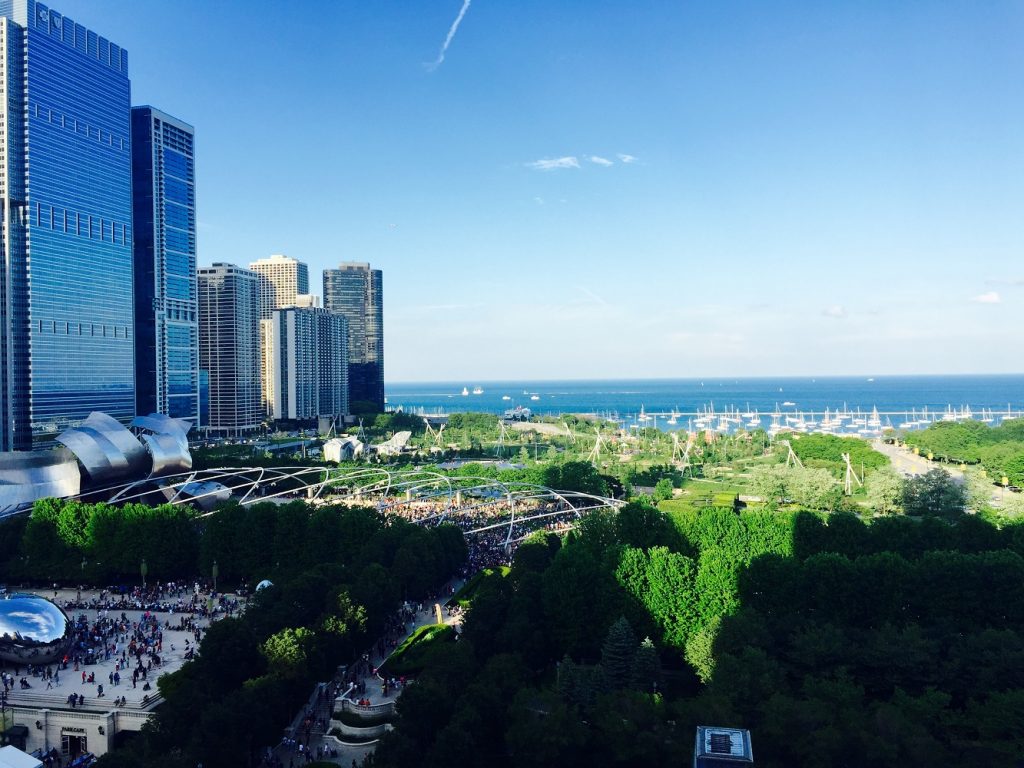 Overlooking Millennium Park from a Michigan Avenue rooftop. The Bean and Jay Pritzker Pavilion can be seen on the left, with Lake Michigan in the background. (Photo: Edward Carmody) 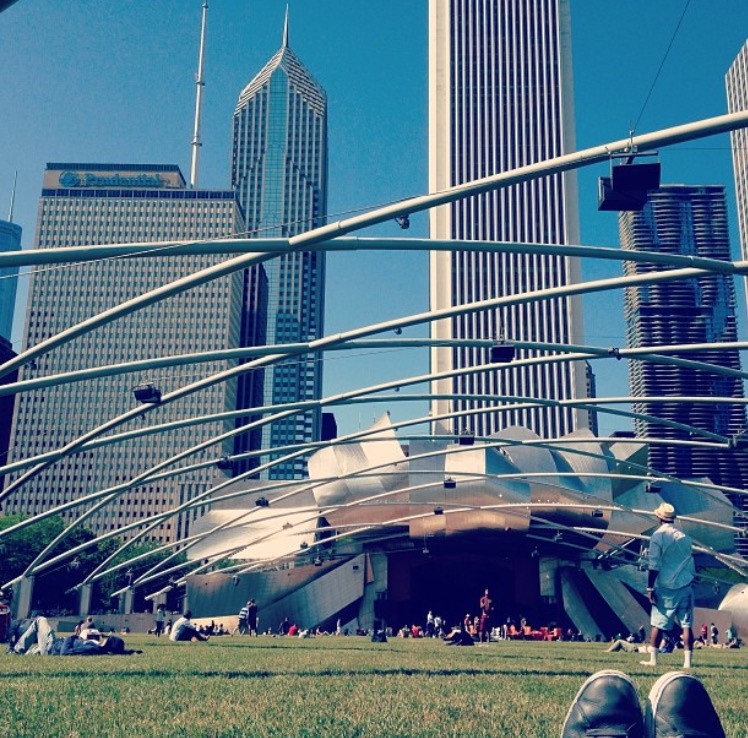 Just south along Michigan Avenue continues Grant Park. At 319 acres, it could easily fall prey to unfavorable behavior and the resulting “Stay out of the park at night” rhetoric. In a heartbeat, New Yorkers will tell you as much about their own gigantic urban rectangle of green space, Central Park.

Yet Grant Park is purposefully punctured by major attractions throughout. A short stroll south of the Bean, The Art Institute of Chicago sits facing Michigan Avenue, its steps a meeting point for friends embarking on nightlife adventures. Further south and towards the Lake, all paths lead to Buckingham Fountain, a wonder to behold at sunset hours. From this point south, you will likely notice a stream of pedestrians parading towards Soldier Field for a stadium-sized show by a pop culture icon or a home football game by the Chicago Bears. As the paths widen towards the mega structure, revelers delight in the echoes of street drummers and performers, who liven a swath of park space and thus integrate it into the city’s urban texture.

While Grant Park’s fanfare adds much to the eastern half of the Loop, Ogilvie Transportation Center and Union Station – the two hubs for trains extending into the dense Chicagoland suburbs – provide steady cross-town foot traffic. Indeed, suburban teenagers bemoan the one-mile late night stroll to the trains after Park-related events have ended. 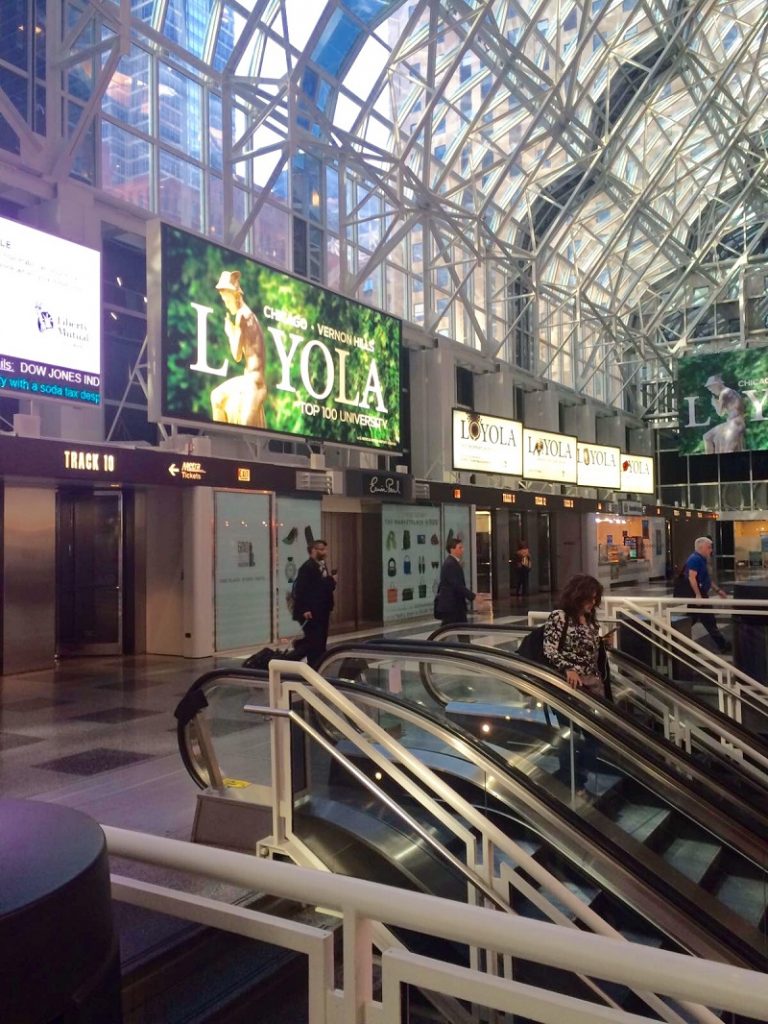 The entrance to the tracks at Ogilvie Transportation Center (Photo: Catherine O’Brien)

This short walk is perhaps most critical to the Loop’s efforts at counteracting its nighttime dead zone tendencies. With thousands of pedestrians crossing from the West Loop (where these transportation hubs are located) to the East side upon arrival to downtown – and then back again upon departure – many businesses on east-west streets remain open; they cater to the nighttime desires of hungry partiers and those in need of a recharge before boarding late-night trains. As a result, the Loop maintains a street life that operates independently of traditional daytime business schedules.

Meanwhile, those living within the city limits cluster late at night around the various CTA stops. Sprinkled all over the Loop, the stations provide 24-hour transit along several color-coded lines. Many stations are elevated, creating a visible presence of pedestrians moving to and from the Loop at all hours. This flow alone counteracts nighttime desolation.

Chicago is by no means perfect or even close to it. Its vast size means it remains car-oriented regardless of public transit options, and several points near the southern and western edges of the Loop remain devoid of significant nighttime activity.

Still, the interaction of a multi-nodal public transportation network and diverse public event and gathering spaces encourages much of Chicago’s downtown to remain part of the urban fabric long after the workday ends. Such a mixed-use business district is more sustainable; by maintaining more complicated and interconnected relationships to a diverse population of city visitors and inhabitants, it can respond to various stressors and economic shocks with more resilience. Most importantly, such a district feels truly urban to those meandering about.

That exciting and unpredictable sense of “anything could happen” is, after all, why many of us frequent city centers to begin with.

Edward Carmody is an Urban Studies Master’s student at the University of Amsterdam. A recent transplant from New York, his research interests include urban poverty, homelessness, and food access. 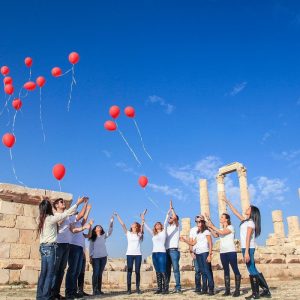