Ancoats, Manchester – The last time Manchester was world news, it was because of the riots which dramatically disrupted social life within the city. The capital of North-West England is considered to be a raw city which is not able to compete and link up to the developments taking place in the South-East. Some say it is because Manchester does not have the geographical position for multinational headquarters, others mention the lack of aesthetically nice buildings and city centre, and again, others just blame the Northern English humid weather.

But there are reasons to believe Manchester is on its way to narrow the gap with London and the South East. It has huge amounts of one basic structure, which is unprecedented anywhere else, and it has the potential to become the pearl of Great Britain, that is: Industrial Legacy.

The epicentre of this urban-industrial quality has its embodiment in Ancoats, an innercity area of Manchester. This part developed itself in the late 18th century and became the centre of the world in terms of cotton industry. Next to the River Medlock and the Rochdale Canal, the smoking chimneys shaped the urban outlook and symbolised Manchester’s ongoing and unprecedented industrial creativity. In twenty years time, within Ancoats 111 Mills were build up, next to other industrial activities such as glass manufacturing and machine engineering. The French writer Leon Faucher (1844) almost used poetry to describe the ongoing operation of Ancoats’ mills: ‘Fogs which exhale from this marshy district and the clouds of smoke vomited forth from numberless chimneys … you hear nothing but the breathing of vast machines, sending forth fire and smoke through their tall chimneys.’

In the 20th century, when people would have wandered around in Ancoats, they would not have believed the writings from Leon Faucher. Manchester did not have a clue how to deal with the huge mill structures and basically left it behind. Not having the money to tear it down, it was left derelict.

But with the turn of the 21st century, it is back on the agenda. Back to show the world its legacy and its strengths and power it ones owned. The city of Manchester is investing an awful lot of money to redevelop it and to give its old gracefulness back. Due to its proximity to the city centre and the hip Northern Quarter, it will become a fancy, residential area, next to designers’ workshops and other high skilled cultural labour. There is a long way to go, but the road is being paved so development can grow faster than ever. Once again, Ancoats will be at the centre of the world. Not because of smoke, steam and fire, but because of a thriving, hip area where leisure, arts and living come together. And for that reason, Industrial Legacy is closing the gap between the South East and the North West. 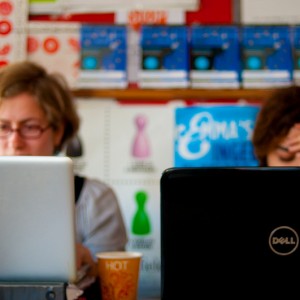 Sitting in a café but not ordering anything, hanging out in a social space without being really present… Meet the digital...
© 2012 - 2019 The Protocity.com. All rights reserved.
Back to top