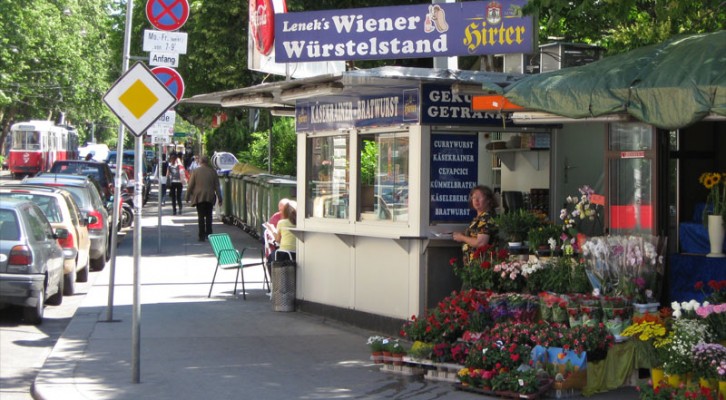 Urban Object of the Month: The Würstelstand

‘Urban Object of the Month’ is a new series of posts on the ProtoCity blog where we present to you city objects that are somehow interesting because they are weird, funny, extremely useful or useless or unique in another way.

The first object presented is the typical Viennese Würstelstand (roughly translated ‘sausage kiosk’), home to delicious sausages, hot dogs, and probably most important: beers! A lot of us know this dilemma: it’s four in the morning, the bar or club is about to close, but you just feel the need for a little snack and a last beer before going to bed or to the next venue; a nearly impossible enterprise, if you want to avoid the overpriced, overcrowded, frightful and touristic places as here in Amsterdam, which unfortunately are the only places to get a snack at that time of the day (I don’t even talk of beer, that’s impossible anyways).

You think this is the way in every city? Pah, wrong! Not in Vienna, where the always hungry, always thirsty pleasure seeking people developed an institution called ‘Würstelstand’, offering beers, beverages and most important sausages such as Burenwurst (‘Burenhäudl’), Käsekrainer (‘Eitrige’- better try not to translate this expression, it will kill your appetite), Frankfurter (or Wiener) or Bratwurst and therefore became an essential urban object and main part of the urban life in Vienna. 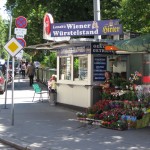 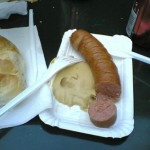 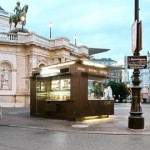 Open almost around-the-clock, these kiosks in the streetscape of Vienna and a bunch of other cities in Germany and Austria are the anchor for every hungry night owl desiring a small delicious dish and a beer to flush it down before jumping into the bed or the next club or the just to bridge the travel time in the tram or subway to the club with beer, whereas during daytime these places are the target of the penny pincher looking for cheap food.

Overall, it’s a social place: you are never alone at these places; there is always someone to have a nice chat to, although the chats may disappear into the booze- nirvana sometimes. If there are no customers, the autochthonous woman or man  (these guys are relics of an époque in Vienna most of us youngsters only know from TV) behind the counter will always have an answer ready to all your secular and not-so-secular problems. At the very least, you can expect a sympathetic and caring ‘well, that’s life’ from these street philosophers. Who doesn’t feel better after hearing this? And in case you don’t have any problems to share, the ‘Würstelfrau’ or the ‘Würstelmann’ will provide you with the newest gossip of the neighbourhood, while you enjoy your sausage and your beer. See? There is no way you will be bored!

You might wonder now, where did this mixture of public food & beer supplier and everyday psychologist for the night owl and the penny pincher, for the upper-class people leaving the opera craving a quick snack before returning to their palais and the working class men aiming for some conversation over a cheap snack and a highly electrolytic beer come from?
Well, it all started in the Austrian-Hungarian Empire (so a long, long time ago), when butchers offered their sausages via a mobile kiosk to the urban dweller. Later, the privilege of selling has been dedicated to war invalids so they can gain a ‘modest’ life of it. Only in the 1960s, these kiosks were allowed to become stationary in the urban landscape, thus forming with their not always thrilling design an essential part of Vienna’s streets and squares. Especially the locations at public transit hubs are popular under the Würstelstand-owners, and around the large subway stations you will find plenty of them.

In recent years, the menu of the Würstelstand has been extended with some more oriental tastes: kebab and dürüm added to the flavour-experience. Not to the pleasure of everyone, some see the ‘Würstelstand’ and its tradition threatened by the increasing amount of kebab and pizza selling kiosks and set up a Facebook-group ‘Save the Viennese Würstelstand’ (in German: ‘Rettet den Wiener Würstelstand’), including the bitter taste of xenophobia. (See for yourself). For all the others, kebab, dürüm and pizza are welcome extensions and go very well with a nice canned beer (called a ‘Hülsn’).

If you want to read further on the history and the importance of the Würstelstand for the urban life in Vienna, have a look at the following sources (sadly, only in German):

Thanks for the great post. Is the Wuerstelstand on the photo the one on Graben/Seilergasse? I have been there just last week after a concert, killing my hunger with a wonderful cheese sausage (Kaesekrainer) and gulping down a can of Almdudler (sweet herb fizzy drink).

You seem to be profound connoisseur of Vienna’s Würstelstand universe! The Würstelstand on the picture is indeed at the corner of Graben and Seilergasse, and your little dictionary on the is outstanding, and we could add so much more expressions you might get confronted with when ordering. Some other phrases that come to my mind right now are: ‘mit bugl?’ is an alternative for the ‘dunkel or hell’, as ‘bugl’ means a slice of dark bread due to its characteristic form. Very important for the Würstel- gourmet is the question ‘Kren oder Pfefferoni?’, for ‘horseradish or chili pepper’.
Awesome to see this part of Vienna’s culture is sticking to the minds…

[…] of us agree that Vienna is notoriously famous for things like Würstelstand, Mozart, Sissi and Beethoven, but certainly no one thinks of Vienna when talking about cycling. Not […] 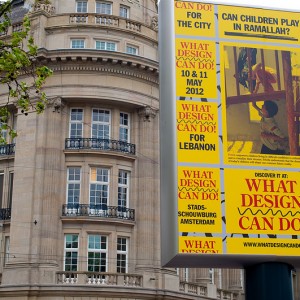 #WDCD: Rethinking Urban Planning What Design Can Do, an international conference on design hosted at the Stadsschouwburg...
© 2012 - 2019 The Protocity.com. All rights reserved.
Back to top