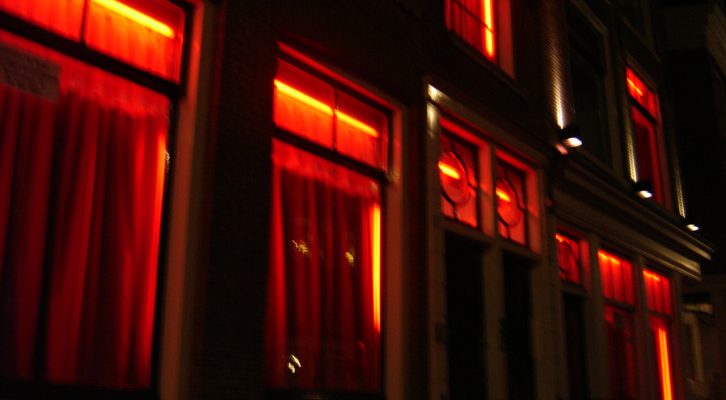 Amsterdam, April 9th 2015. Over a hundred sex workers have gathered at the Oudekerksplein, a square that lies at the heart of Amsterdam’s red light district. Soon, they will march from the square to the city hall, where they will hand over a signed petition to mayor Van der Laan, who has recently announced that over 30% of the brothels in Amsterdam’s most famous neighborhood will be closed by 2018. The sex workers stated that the municipality’s declared motivations for closing the brothels – protecting victims of human trafficking and preventing involuntary prostitution – were merely a cover to redevelop the neighborhood.

Two years earlier, a similar event took place in Soho, London’s historical red light district. There, the English Collective of Prostitutes organized a protest against the forced evictions of the districts’ sex workers, which, according to Scotland Yard, were conducted to ‘tackle the historical crime problems surrounding prostitution’. Just like in the Amsterdam case, this policy was criticized by the protesters as a legitimization for cleaning up London’s historical red light district from ‘undesirable people’.

Worldwide, in cities like Hong Kong, Taipei, Montreal, Antwerp, London and Amsterdam, municipalities have developed policies aimed at reducing the physical presence of sex work in the city (Cheng 2016). The cities’ red light districts, providing a profitable working environment for sex workers who are relying on the acquisition of clients through location, have become the main targets of these policies. It has been argued that these policies are, rather than fighting the illegality surrounding prostitution, focused at creating sanitized spaces designated for the middle classes (Sanders-MacDonagh et al 2016). This type of state-led gentrification has been criticized as a form of territorial stigmatisation, as the sex workers are displaced on the basis of their location rather than on the type of work they perform.

What has often been neglected in the debates about red light districts is that sex workers are part of a local community through which they find protection. For my master research, I have investigated the ways in which the communities of London’s and Amsterdam’s red light districts have responded to the hardened policies with regard to prostitution. How could these communities be included in governing sex in the city? 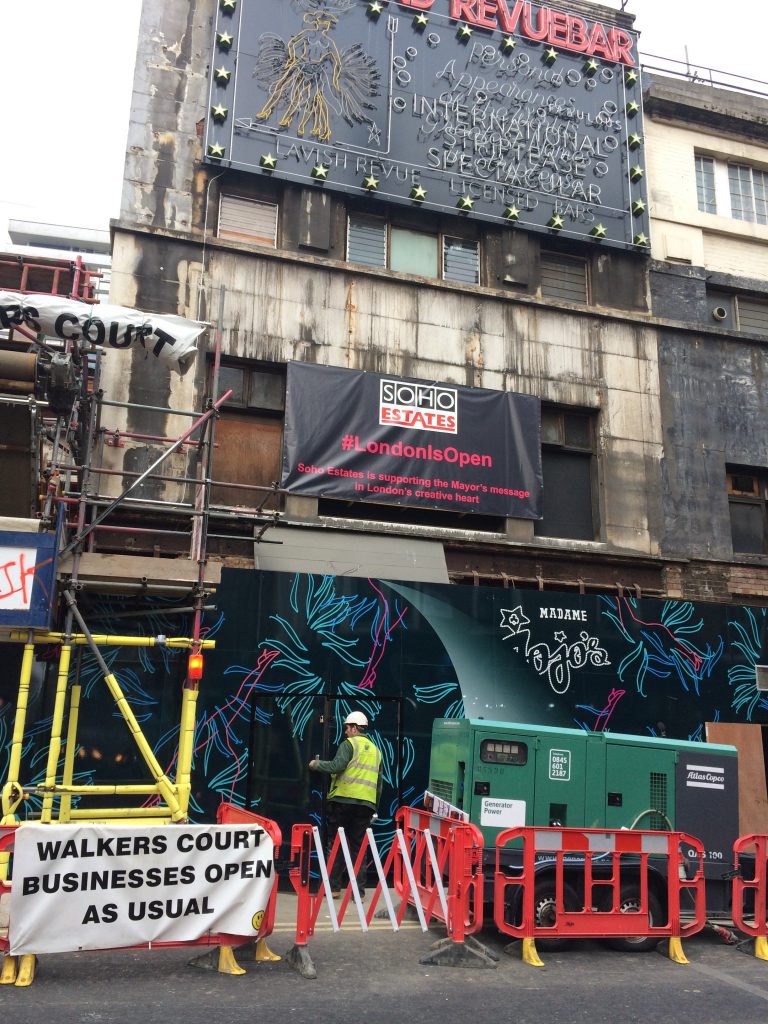 Soho’s Walkers Court used to be the home of numerous brothels, which have been evicted as a part of the regeneration plans. Photo by author.

Social Cohesion as Tool for Governance

In the post WWII-period, when the city centres of western cities were left for the suburbs, red light districts attracted a vibrant community of migrants, artists and others in search of opportunities. At that time, the sex workers were an inherent part of the local community. Neighbours and sex workers would know each other and the pimps were likely to hang out at the local cafes, which made it easier to report abuse to the police. Although the nature of the sex work at that time shouldn’t be romanticized, it can be argued that the social cohesion made the red light district a relatively safe place to work.

Due to globalization and increasing housing prices in the city centres, many of the smaller businesses have left and made places for larger corporations (Hubbard et al 2009), which has given the sex industry a more anonymous character. This has made it harder to fight criminal activities such as human trafficking and involuntary prostitution. Whilst these are severe problems which have to be dealt with, it can be questioned whether evicting the sex workers from their workspaces is the best solution. Removing sex work from its physical location without offering an alternative means that sex workers will probably have to continue their profession elsewhere, out of public sight. Rather than displacing sex workers, providing them with ‘eyes on the street’ could work as a better alternative. 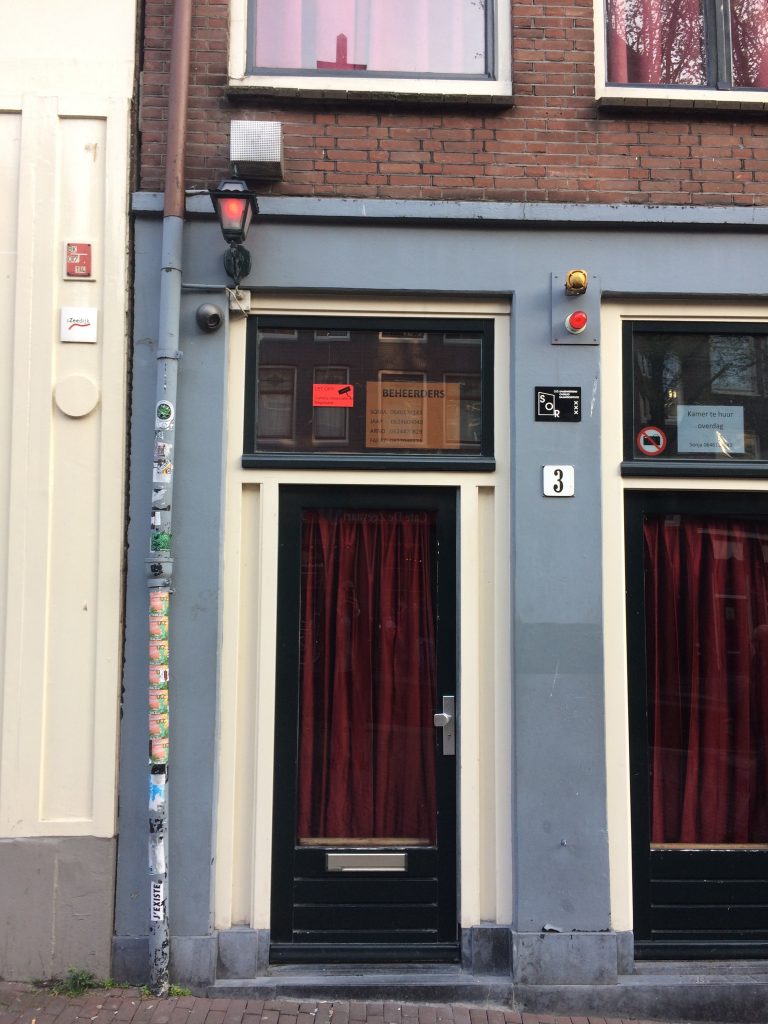 In Amsterdam, window brothels are equipped with an alarm button to ensure the safety of sex workers. Photo by author

Collaboration instead of Marginalization

This month in Amsterdam’s red light district, the municipality has started an experiment called My Red Light, a brothel run by an independent collective of sex workers. By putting the sex workers in charge of their own workspaces, the municipality hopes to prevent the problems that come with the anonymity of the sex industry.

Despite the municipalities’ good intentions, brothel owners and sex workers of Amsterdam’s red light district have been critical about the experiment and called it ‘ just a compensation for the closing of the brothels’. They indicated that they felt marginalized by the regeneration policies and criminalized by the hardened regulations with regard to sex work. The mayor’s statement that ‘400 women are being raped in Amsterdam’s sex industry every day’ became the source of severe protest amongst brothel owners and sex workers.

As a reaction to this statement, the local Prostitution Information Centre performed a research in which they stated that only 38 women working in the red light district were working on an involuntary basis. Although they agreed that this number was still too high, they felt that the mayor’s statement worked to victimize these sex workers rather than empowering them. Critics of the My Red Light experiment stated that sex workers had already been working independently for ages and that the existing brothels were already providing them with safe workspaces. In London’s red light district, similar statements on human trafficking have been held by the authorities to explain the eviction of sex workers, to which the sex workers again responded critically. They too indicated that the brothels were the safest places to perform sex work and that they found security and comfort in the presence of other sex workers.

Since the protests of 2013 and 2015, many sex workers have been displaced from their workspaces in London and Amsterdam. Who knows where they have gone? Rather than presenting sex workers as anonymous victims, municipalities might be more successful in fighting instances of involuntary prostitution by collaborating with the local sex industry. Despite its local criticism, I think that concepts like My Red Light can serve to improve the position of sex workers by putting them in charge of their workspaces rather than evicting them. Rather than approaching red light districts as immoral, dangerous places, they should be regarded as communities which, when well supervised, have the opportunity to provide a safe workplace for those who choose to sell sex in the city.

Urban researcher with a background in anthropology. Slightly idealist and naïve, she hopes to give a voice to those groups who are less heard in the urban discourse. 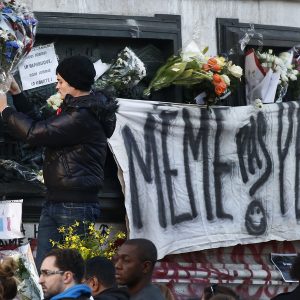 Three years ago, the Paris municipality redesigned one of its major city squares, Place de la République. The plan was simple:...
© 2012 - 2019 The Protocity.com. All rights reserved.
Back to top