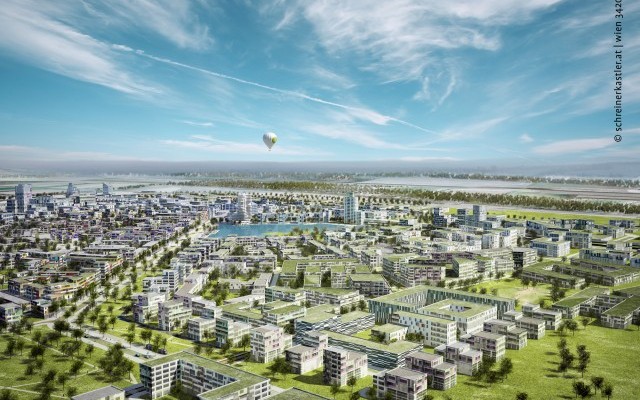 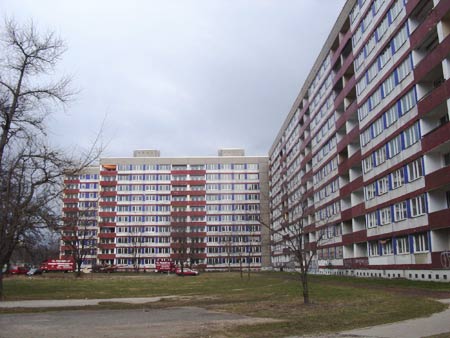 Large scale urban developments as they were common since the 1960s were often inspired by modernist ideals such as the ‘tower in the park’ and the idea of a functional separation of spaces in these estates: living, working, moving and transportation and leisure activities. This separation resulted in often disintegrated and ample spaces, especially for leisure activities that were as well insufficiently designed. Rather than being conceived as an intrinsic part to the quality of life and the well-being of residents, leisure spaces were seen as gap fillers between the buildings and provided besides grass and some trees few diversity in its design. Public spaces and streets were designed in a similar conception as spaces of movement and circulation rather than places which residents should use to live,  meet, or spend some of their spare time.

Various estates in cities around the world highlight the modernist understanding of public space in such estates: from the banlieues in France to the big housing estates in Germany and especially in cities with a socialist history in the eastern part of Germany to Poland and Russia.

Time not only changed the political order of the world, but also the planning paradigms away from the modernistic and functionalist understanding of cities and life in cities to a more integrated, open and differentiated view on spaces and places in neighborhoods. In the following paragraphs I want to outline a positive example of how to conceive and plan public spaces in large scale residential developments: the project ‘Seestadt Aspern’ in Vienna.

The ‚Seestadt Aspern’ is a development project by the city of Vienna in order to provide housing to the growing number of inhabitants. In the period since 1990, the city of Vienna received more than 200.000 new inhabitants. Prognosis estimates that in about two decades the city will hit the 2- million inhabitants mark, about 300.000 more inhabitants. To ensure proper housing to Vienna’s citizens, a number of large residential projects are under way: around the new main railway station for about 10.000 inhabitants, on the area of the former northern railway station for about as much inhabitants, and the biggest of all: the ‚Seestadt Aspern’. After completion about 20.000 people should live and about as much work there. Contrary to the other two mentioned projects, ‚Seestadt Aspern’ is not developed on former railway grounds but on a derelict airfield at the fast growing margins of the city. On an area of about the same size as the historic inner city of Vienna, a new neighborhood is constructed in three stages until 2015, including new trams, a subway line, a railway station and a highway. 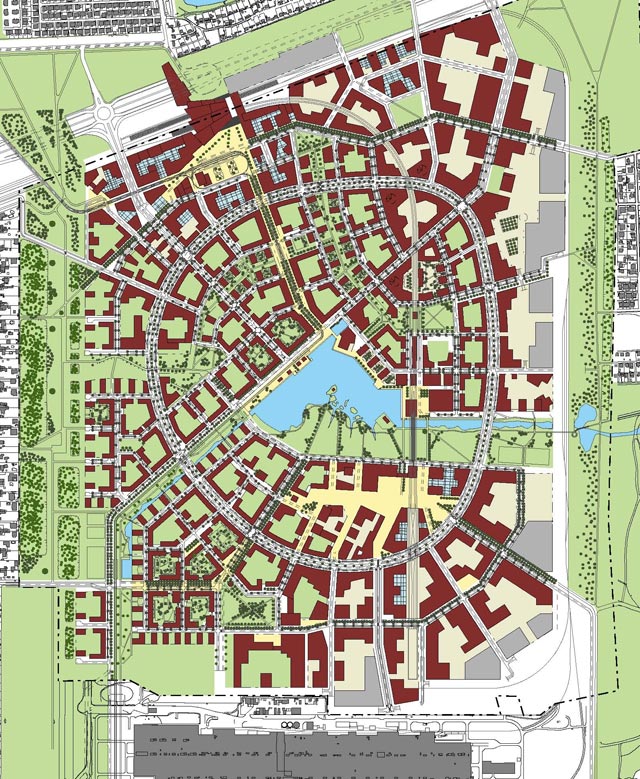 The name ‚Seestadt Aspern’ means ‚lake city Aspern’ and comes from a lake in the center that has been excavated. ‘Aspern’ is the name of a neighborhood nearby.

Until the finalisation the city of Vienna plans on providing around 500 million € of loans for subsidized housing for not-for-profit housing corporations. Private housing corporations and prototype groups (‚Baugruppen’: individuals forming an association to develop a residential project) are forming an integral part of the whole project. The development corporation concerned with the general development, Wien 3420 AG, invests another 300 million € for infrastructure and green spaces. Until the finalisation of the last stage, approx. 4 billion € will have been invested in the new neighborhood by all actors.

The dimension of the project ‚Seestadt Aspern’ is quite large, and in order to avoid mistakes of the past in developing new neighborhoods, a coherent masterplan was developed. Not so special yet, not even for quite conservative planning traditions. What makes this project remarkable is the attention paid to the public spaces in the project. Rather than conceiving them as mere spaces of circulation and movement, they are understood as vital part of a neighborhood and thus deserve adequate attention. In this case, an own masterplan, called ‘Partitur des öffentlichen Raums’ (‘The Score of Public Space’) was developed for public space (understood as parks, lakes, streets, squares) with a quite differentiated view on functionalities and uses of space. Each of these groups features a particular set of design elements and dimensions, according to its main purpose, its location and the social infrastructure adjacent to it (see the picture ‘Typology of the ‘Red String” later in the text). 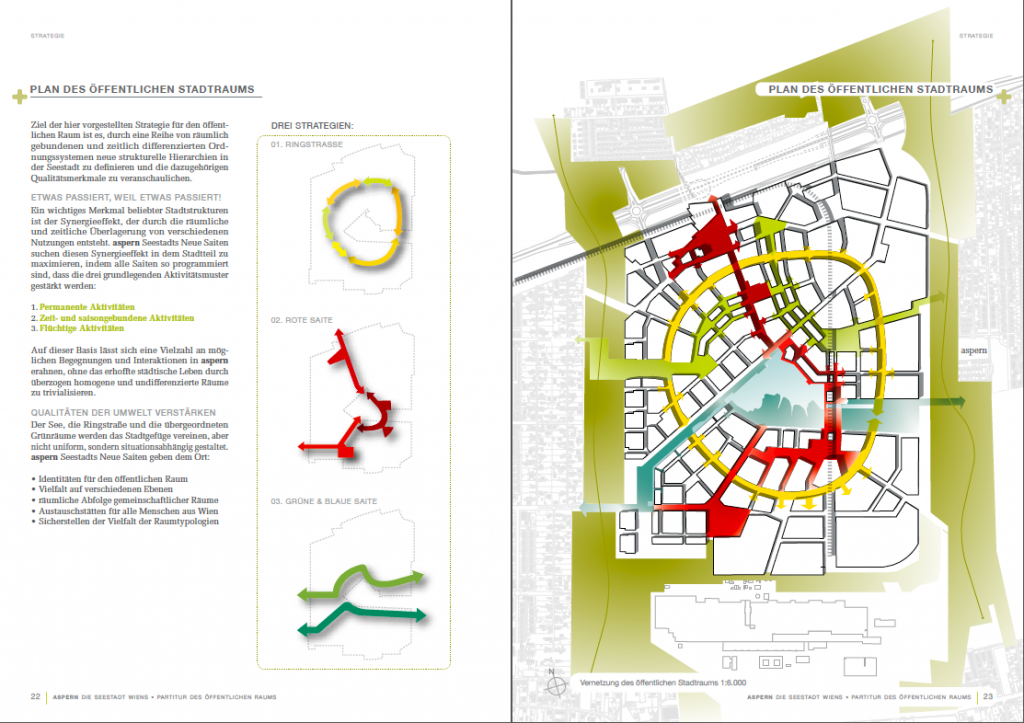 Three major types are classified here (see picture above), called blue, green and red string (connecting to the music- inspired title of the document). These strings cut through the neighborhood diagonally, and each of them has particular road cross- sections according to the location: residential, meeting (pedestrian zones), moving. Ample spaces are dedicated to pedestrians with street furniture inviting to sit and engage with others rather than just circulate. Streets and squares are understood as the main meeting points for the residents and thus seen as playing a key role in ensuring a lively, engaging and livable neighborhood. The following picture shows the conceptualization of one of the strings, the red string. 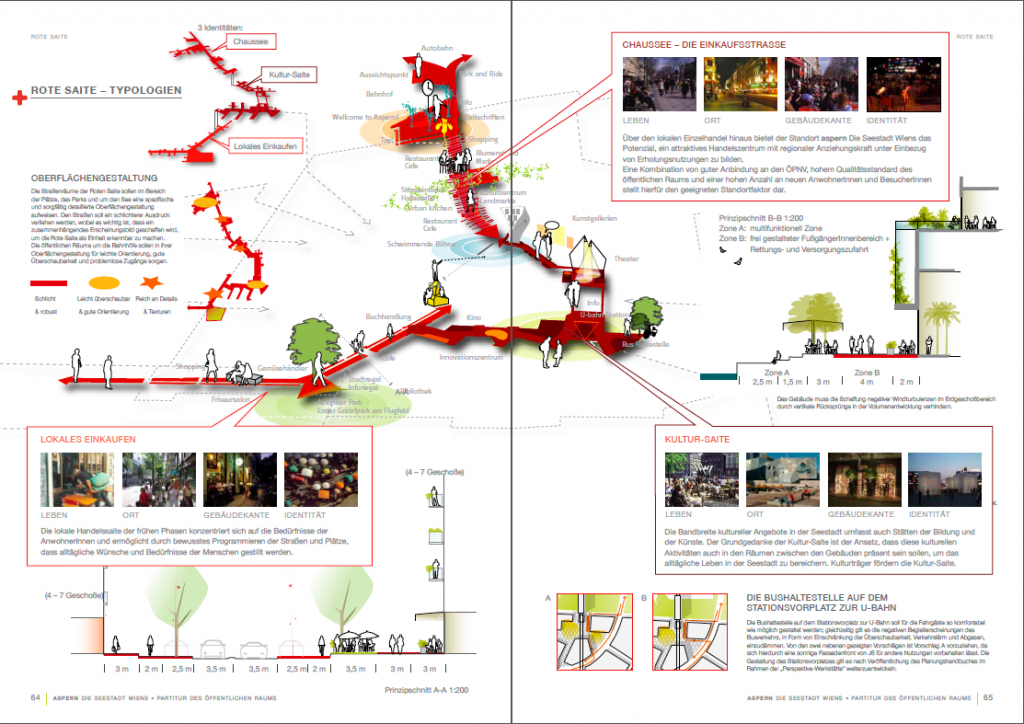 Typology of the ‘Red String’- detailed typology of spaces along this type of public space (‘Partitur des öffentlichen Raums’ p. 64-65)

Towards a New Understanding of Public Space?

The ‘Partitur des öffentlichen Raumes’ is an interesting switch in understanding the role of public space in neighborhoods. Instead of conceiving public spaces like streets and squares as areas of circulation and movement, the designers of the ‘Seestadt Aspern’ understand such spaces as the key to a functioning neighborhood by encouraging social interaction between pedestrians. Providing a differentiated set of spaces for a variety of uses like sitting, playing, eating or meeting highlight the importance of an adequat design of streets and squares, and allow for public spaces that are not filled with cars and traffic, but with residents.

As always in big projects it remains to be seen to what extent the design is executed and how close the actual project will look like. Besides these technical restrictions, the actual use by residents is more than unclear. Just because an architect or planner conceived a particular space in a way, there is no guarantee that it will be used in exactly this way. Social interaction remains outside the scope of any masterplan, and the idea of the strings might be undermined by deviant use of residents. Time will show how flexible the design of these differentiated spaces reacts on changing social habits of residents. If the design of the streets is open to deviant uses and non-exclusive, the probability that residents will use them in a way that keeps the neighborhood lively is quite high. If not, this will be yet another example of how ideals of architects and planners sweep aside needs of residents.

I’d be curious to know a bit about the dwellings going up in this area and who they’re targeting. That, of course, will largely come to define these spaces once they’re being used by locals. Can you share some insight into this?

Thanks for your question!
After digging into the material published about the dwellings that are built at the moment (the project is built in 3 phases), I am afraid I cannot give a clear-cut answer to your question. In the current stage scheduled to be ready in 2016, 2800 apartments are built. The dwellings target a mix of residents as the sizes vary normally from ca. 50- 130m2 and offer various forms of property relations: subsidized rental, subsidized owner- occupancy and not subsidized owner-occupancy. I could not locate a document giving insight on the %- shares of each form, but I am quite sure the subsidized housing developed by not-for-profit housing cooperatives is dominant.
In order to be eligible for subsidized housing in general, your yearly income has to be below a specific border (rental- 1 person: 43.160€, rental 2 persons: 64.320; owner- occupied- 1 pers: 49.330€, owner- occupied- 2 pers: 73.500€). Some subsidized housing apartments in this project though have capped rents and prices for cooperative shares (e.g. max 7,50€/m2 rent before taxes and max 90€/m2 cooperative share) as the City of Vienna provides most of the housing cooperatives with cheap credits in exchange. However, there might be apartments to buy or rent to other conditions, as Vienna’s subsidized housing system is extremely complex, so bear with me for simplifying here.
As mentioned in the article, a special form of ownership is encouraged in this project: Baugruppen or prototype groups, but this is more an exception as only 5 apartment buildings are developed in this form (see here for more info: http://blog.aspern-seestadt.at/die-aspern-baugruppen-auf-einen-klick/)
For more information on the buildings under construction right now, click here: http://www.aspern-seestadt.at/mitgestalten-investieren/bauinfo/)
Official information on the developments in Seestadt Aspern on the site of the City of Vienna: http://www.wien.gv.at/stadtentwicklung/projekte/aspern-seestadt/wohnen-arbeiten/wohnungen.html
If you have any more questions, feel free to ask! 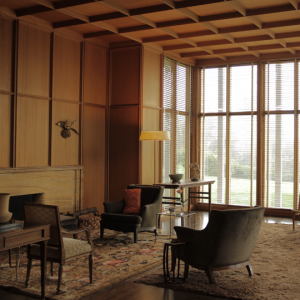 Filming Cities at The Proto City: Our authors review films about the urban environments that we inhabit. To kick off the series,...
© 2012 - 2019 The Protocity.com. All rights reserved.
Back to top