What to do on the coldest Saturday, 24th of March in the history of Holland? You join the ‘Old Amsterdam Food’ tour – Well at least that’s what we did with no regrets, and only half-frozen toes. This week the Tour welcomed a special guest, Carolyn Steel (a London-based architect, food enthusiast and author of ‘The Hungry City: How Food Shapes our Lives’ (2008)  as part of the Food Film Festival 2013.

The tour began at De Waag, Nieuwmarkt, where the gate once served as a passage between the countryside and the old city of Amsterdam. A symbolic location to start the tour and to realize how much the City has expanded since its Golden Age in the 17 Century. 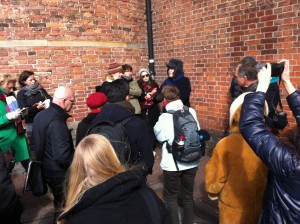 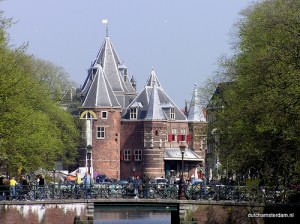 We then proceeded to Oude Kerk where we learned about how the Netherlands became Europe’s first industrial grain traders in the 17th century by exporting grain from Gdansk, also known as Danzig, the bread basket of Europe. We discovered that each canal had a commercial purpose to allow for easy access to commodities including vegetables, fish (especially herring), and grains – there was even one canal designated for the sole purpose of stocking Amsterdam’s thirst of beer! Next time you are enjoying a cold beer think about this: today’s beer culture in Amsterdam, and more generally in Western Europe can be attributed to the former issues concerning potable water – we clearly went down the beer route, whereas Asia took the tea route in order to purify their water supply. 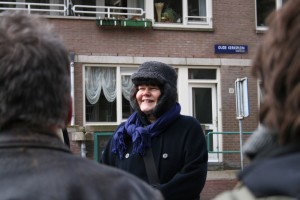 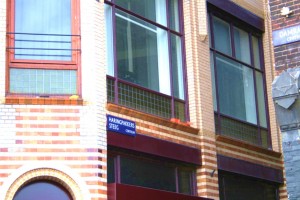 Thanks to the lucrative grain trade made possible by the invention of a particular boat that could transport large quantities of grain, which was a relatively worthless considering its bulk and weight, the City of Amsterdam flourished. Carolyn Steel poignantly posited “I’m afraid that traders have and always will be the most profitable in the food business. Money lies in the trade.” Considering the prominence of trade in Dutch history, it is clear that the city was structured around feeding its growing population. Our guides emphasized the fact that today’s food system and the predicaments surrounding it are deeply embedded within our historical context.

In addition to the Dutch grain trade, herring also became a valued commodity. Branching off from Damrak there is a small street called the ‘Haringpakkersteeg’ indicating its prominence for the local economy. The trade was facilitated by the discovery that herring could be preserved by discarding all the innards save for the pancreas. However the saying remains: ‘the city of Amsterdam is built on herring bones’.

Before warming up with a cup of tea, the tour also passed Damsquare – which became a vibrant meeting point for civic, commercial, political and religious interaction. It was here that the first shares could be purchased into the first multinational corporation- the Dutch East India Company.

Interested to hear more about how food shapes our cities and lives? 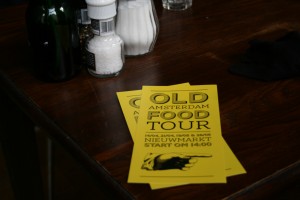 Check out the next dates for the ‘Old Amsterdam Food Tour’. Make reservations online and enjoy discovering your city through the eyes of food!

Don’t miss the book launch ‘FARMING THE CITY – food as a tool for today’s urbanization’ on 10th April in Pakhuis De Zwijger.

Susu and Anna-Lisa are avid food enthusiasts interested in a range of issues – from unpacking the complexities of our food system to indulging our stomachs.

Anna-Lisa Noack is an MSc candidate in International Development Studies at University of Amsterdam. She is particularly interested in issues related to nutrition and food security in sub-Saharan Africa.

Susu Dobner is an MSc candidate in Urban Studies at University of Amsterdam, interested in exploring and creating age-friendly urban environments.

Loved your article, espacially after having been in Amsterdam a couple of times.
Food – we all need it! 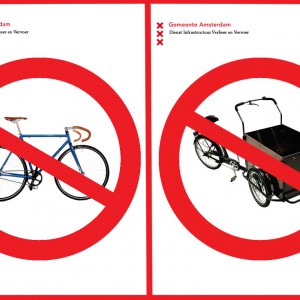 Amsterdam's bicycle culture at stake This article was meant as an April Fool’s Day article. Read more at the bottom of this...
© 2012 - 2019 The Protocity.com. All rights reserved.
Back to top