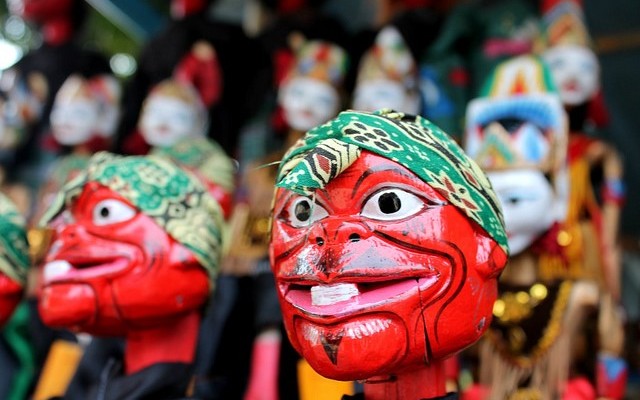 A growing body of evidence, largely based on Charles Landry’s writings on ‘the creative city’, indicates that fostering cultural and creative activity is an essential strategy in building quality of a place, maximizing talent, enhancing sustainability and defining competitiveness in today’s growing knowledge economy. One of the tools to achieve this on the local level is through creative placemaking, which is perceived to turn local creative potential into economic and social benefits for the community. This article explores how creative placemaking in Bandung’s kampung Dago Pojok helps to create opportunities for socioeconomic empowerment and improvement of the physical environment of the area, in a way that it grows local potential to challenge urban inequality. 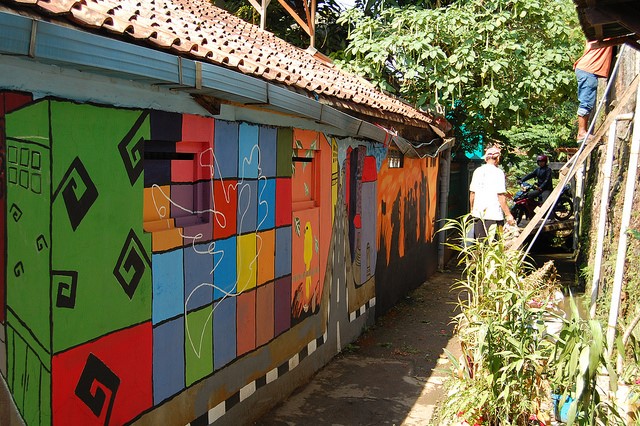 Kampung Dago Pojok is located in the north of Bandung within the Dago area. The Dago area has a long history as an important hub for commerce, socializing and transport. Throughout the 19th and 20th centuries, Dago has become increasingly urbanized. The global process of urbanization, driven by neoliberal forces and capitalism, has resulted in the exclusion of vulnerable groups from formal urban development processes. This is due to the enormous influx of people, in which public as well as private parties have failed to address everyone’s needs in terms of housing and social services, leading to social segregation. Less advantaged groups have been driven into underserved and over concentrated areas such as kampung Dago Pojok, while growing middle classes are concentrating in New Towns and gated communities.

Dago Pojok is known for its poor access to education, public services, modern consumption and formal job opportunities. Currently, the neighbourhood shows a hybrid form of urban and rural characteristics. It is formally administered within the official boundaries of Bandung, yet due to its rural legacy, the area has a rich traditional culture. This traditional culture offers potential as Bandung has acquired a Creative City status by UNESCO in 2008. Since then, the city government has highly focused on developing its cultural and creative sectors, which have been identified as follows: advertising, architecture, arts, handicraft, design, fashion, visual industry, interactive games, music, performance art, print publishing, software, radio & television, research & development and culinary industry. My research has shown that creative placemaking in Dago Pojok has put a successful effort in exploiting particularly arts, handicraft, performance art and music at the local level. This has happened in a way that has improved the social and economic fabric within the community as well as its embeddedness within the wider urban fabric of Bandung.

Creative placemaking and its origins

A team of Bandung inhabitants, formed by artists, cultural workers and academics, took on the job to empower the local community of Dago Pojok. Their aim was to enhance opportunities for social capital building and, as well as to exploit local cultural activities into economic value generating activities within the sectors mentioned above. Besides socioeconomic empowerment, efforts have been made to improve the physical environment (see picture 1). Implemented projects since 2004 are: a creative learning centre, a creative stage for fairs and cultural dance shows; the upgrading of the physical space by wall paintings; a batik (traditional clothing) workshop; and various creative festivals in order to promote cultural products, such as puppets, typical drums and traditional Batik clothing, and to attract visitors (see picture 2). 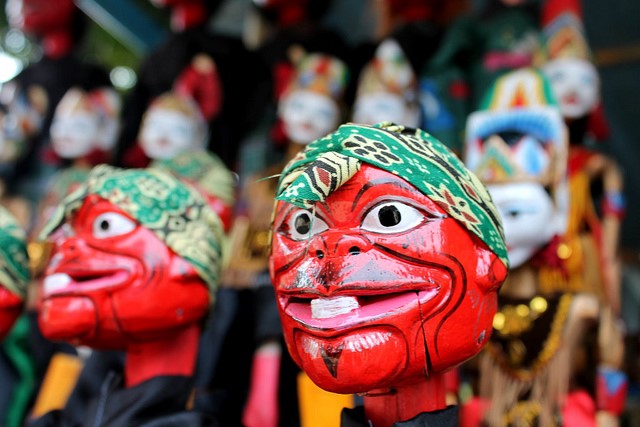 The project’s aims and strategies used by the project initiators can thus be understood according to the concept of creative placemaking. Creative placemaking is a tool for converting cultural and creative potential in economic and social benefits for the community, while transforming public space. The concept originally comes from writings of Jane Jacobs (1961), who was one of the first urban sociologists questioning how public space was appropriated and for what purposes. She criticised top-down shaping of the urban environment and public space, while emphasizing the importance of community involvement in decision-making processes of urban development schemes. Creative placemaking has been formulated by Markusen and Gadwa (2010) as: “an evolving field of practice that intentionally leverages the power of the arts, culture and creativity to serve community interests while driving a broader agenda for change, growth and place identity”. My research has specifically assessed the impact of Dago Pojok’s creative projects on socioeconomic empowerment, based on opportunities to nurture social capital and exploit local culture into economic value. The transformation of the physical space is an integral component in achieving this, which therefore has been evaluated as well.

Dago Pojok: a creative place in the making

Before I assess the impact of the projects I want to introduce the two main (cooperating) actors behind the transformations. The driving force behind the transformation is Komunitas Taboo, a creative platform founded by a local artist in 2003. Since then, the organisation set up a creative learning centre; a wall paintings project; and a creative stage called ‘the Tea House’, all located within the area. The second party involved, founded after the city acquired Creative City status, is the Bandung creative city forum (BCCF), which has set up ‘kampung kreatif’ in various urban slums of Bandung. This project is officially recognized and partly funded by the local government and aims to turn poor areas into tourist attractions based on their specific cultural-geographic traits, which in Dago Pojok’s case focuses on wall paintings. The climaxing event of this project is the yearly ‘kampung kreatif fest’. As mentioned before, this event mobilizes the community to perform in various traditional acts as well as in selling crafts and traditional clothing (see picture 3 below). 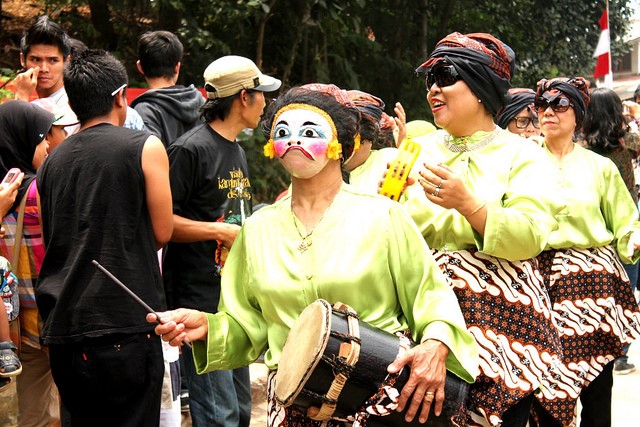 So what can we say about the community impact of Dago Pojok’s creative transformation? First of all, the projects have triggered a higher and more diverse usage of several public spaces. The learning centre, the Tea House and the public streets function as exhibition halls, performance stages, workshops and festival space. Secondly, the better usage of space enables local people to nurture their social capital. The learning centre attracts over twenty people every week gaining knowledge in arts, local culture and music, while fostering social relationships. This has improved people’s creative skills and capabilities, which can be exploited into cultural performances or craft shops. Locals’ involvement in organizing events also fosters community socializing. Besides that, these events attract many people from outside Dago Pojok nurturing recognition for the neighbourhood’s traditional cultural roots, while enhancing cross-community socialization. Thirdly, the wall paintings project has resulted in the attraction of visitors that enjoy the “painted slum” as tourist attraction. Picture 4 below shows how an old woman is selling snacks and drinks to tourists visiting Dago Pojok, which exemplifies how locals are gaining some economic benefits from the physical transformation. 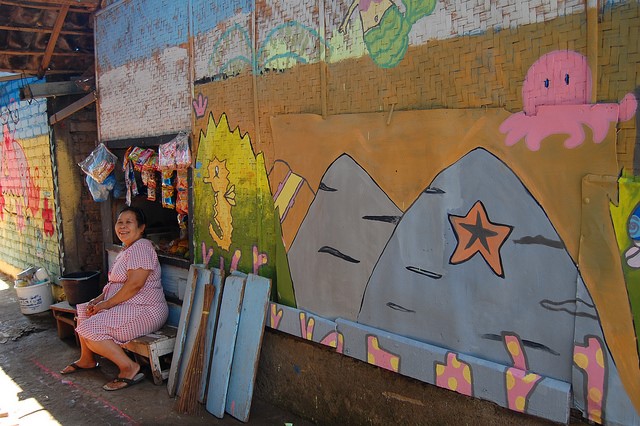 Creative placemaking in Dago Pojok has aimed to improve opportunities for locals to nurture social capital and grow their economic potential in order to empower the community as a whole within Bandung. These developments mainly rely on the physical change of public space in combination with the initiation of creative events and workshops, which foster flows of creativity, culture and knowledge. The wall paintings, for example, have changed “the looks” of Dago Pojok, creating an attractive public space for a diverse range of value generating creative activities, which attracts many people to the neighbourhood. Unfortunately though, it is rather hard to make strong claims about the community’s socioeconomic improvement because reliable quantitative data is lacking. What can be stated is that through creative placemaking more opportunities have been created to benefit the community in social and economic sense. It does not necessarily mean that all members of the community actually benefit from them as being posed by placemaking theory. My research has taken into account 60 persons being involved in workshops, which obviously have benefited most. Overall though, the community counts over 2000 people. The point I want to make here is that one should not underestimate the deep roots of urban inequality. Negative structural impacts of mass urbanization, market failures and poor governance, which generally hit poorer urban inhabitants, are incredibly hard to deal with. Needless to say, we should not give up putting effort in acquiring knowledge about bottom-up processes to increase local potential and viability of neighbourhoods. As, among other cases, Dago Pojok proves to generate some serious forces against growing inequality. In the end however, the smiling faces on the above picture do not lie. These people seem to be happy, which is most important.

Valerie is a MSc student in Urban Studies at the University of Amsterdam. She is fascinated by the changing character of cities over time and across space, and more specifically on the level of individual neighbourhoods. In the light of the growing urban divide and poverty concentration in specific urban areas, her research interests now focus on bottom-up community development.

Bogotá, the capital of a country with a not so favourable reputation. The legacy of years of violence is reflected in the impressions...
© 2012 - 2019 The Protocity.com. All rights reserved.
Back to top